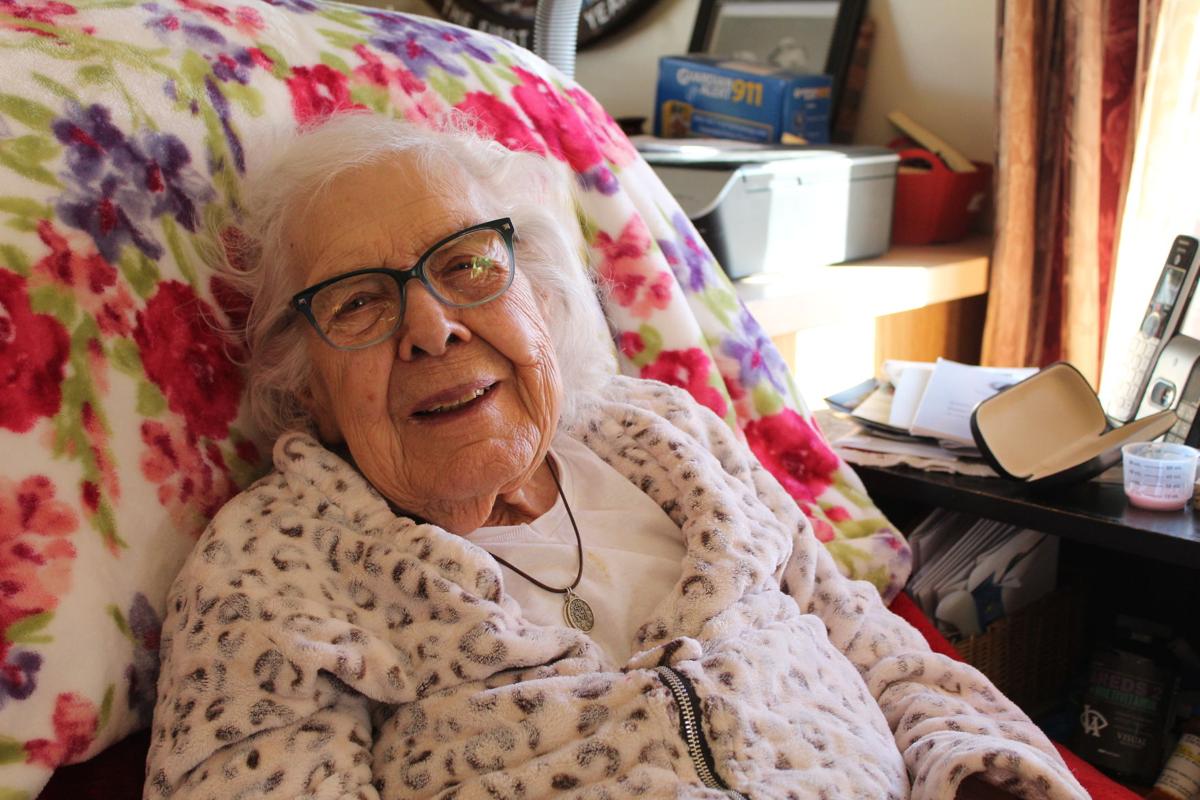 Colorado Springs resident Evelyn French served in the U.S. Cadet Nurse Corps during World War II. French would go on to marry one of her patients at a VA hospital years after he had recovered. 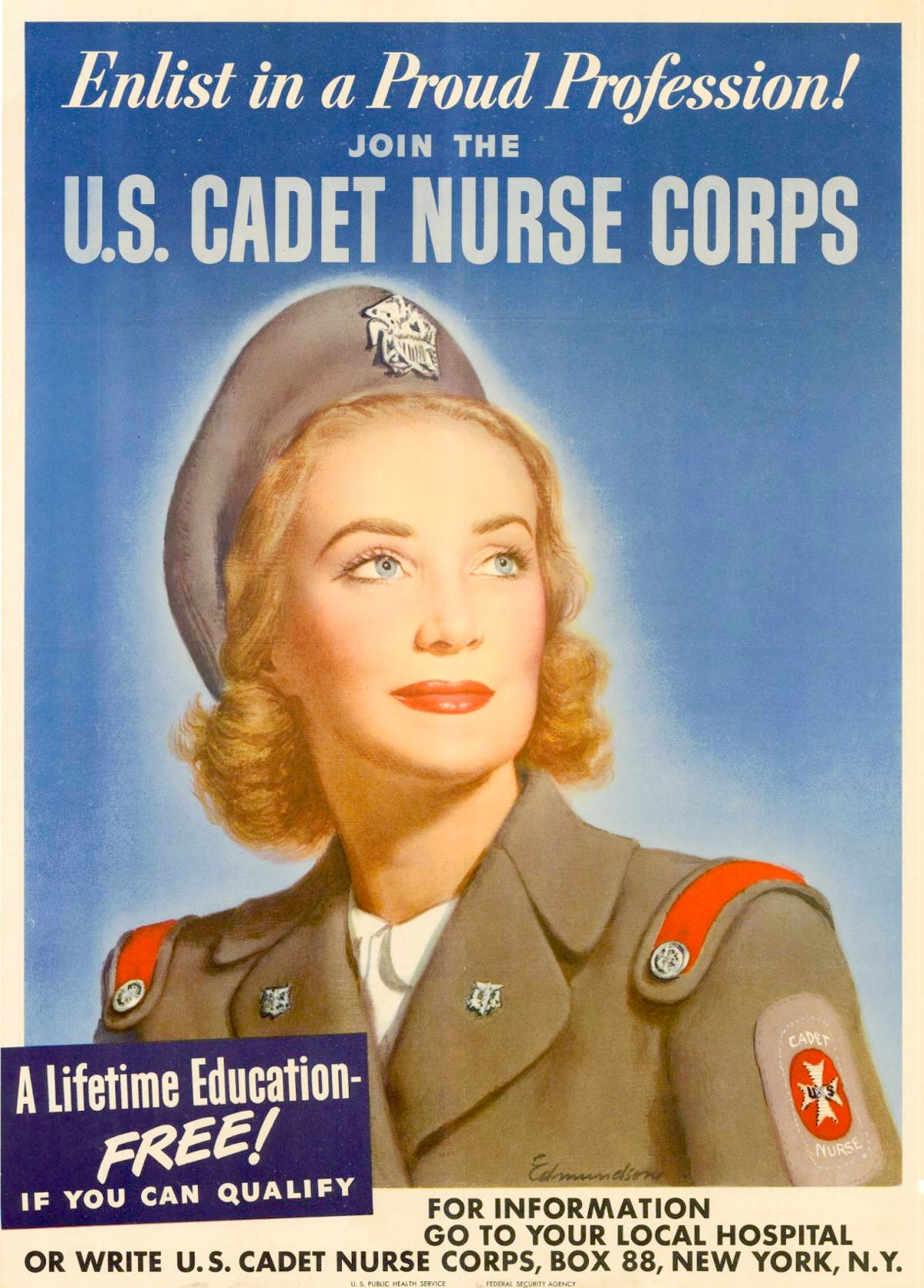 A World War II-era ad, created by the U.S. Office of War Information, encouraging women to enlist in the U.S. Cadet Nurse Corps. 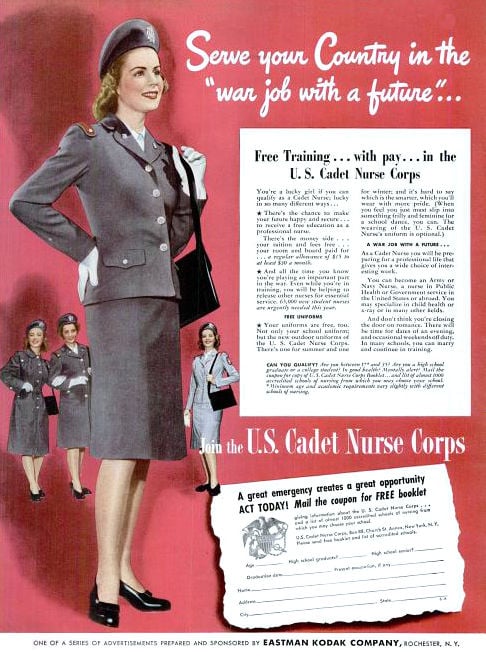 Colorado Springs resident Evelyn French served in the U.S. Cadet Nurse Corps during World War II. French would go on to marry one of her patients at a VA hospital years after he had recovered.

Evelyn French had her sights set on becoming a teacher.

But the war in Europe was raging. Teaching, she figured, could wait.

"I saw all those ads desperately begging for nurses, and I thought, well, we could teach any time, but we can't take care of these injured people any time," the 102-year-old recalled. World War II "had been going on for years, and there was no prospect of enough nurses."

She enrolled in St. John's Hospital School of Nursing, in Fargo, North Dakota, in 1942. Nearly two years into her schooling, facing a shortage of nurses stateside and in the military, Congress passed the Bolton Act, creating the U.S. Nurse Cadet Corps. The program allowed all women between the ages of 17 and 35 with a high school degree to receive a free nursing education, provided they served in the military or essential civilian nursing.

French would become a member of the first graduating class of the corps, a distinction that left her feeling more relieved than anything.

But not for long.

After the night supervisor at a Fargo hospital she was assigned to fell and broke her hip, French became the acting night supervisor — an assignment that left the young woman "scared to death."

"I was really too young to be a night supervisor in a very active hospital," she said, adding that it was the only operating hospital in the region.

French served six months at the hospital, filling in for medical workers who had gone to serve on the front lines. Many hospitals had closed because they didn't have nurses, she said.

Though she wasn't tending to war-wounded, the stories of patients she served were no less heart-wrenching or horrific.

"World War II took every young man — if he could breathe, he was in," she said. "And that meant that farmers who were much too old to do what they were doing were running farm equipment on a wheat farm in North Dakota. They were running binders, tractors and so on, and had severe accidents."

She recalls a man whose pregnant wife went to look for him when he didn't return from the field for supper.

She found him — still conscious, his tractor on top of him — and ran for help.

By the time neighbors delivered him to French's hospital, he had developed gas gangrene, an infection that produces gas in dead body tissue.

He only lived a couple of days, with hospital staff providing him morphine but unable to save him. The wife subsequently miscarried, likely from the trauma of the situation, French said.

"I'll never forget him," she said. "That was a tragedy beyond words."

Another patient she'll never forget: a 17-month-old with a high fever whose worried parents rushed him in.

"He was sick — oh my goodness," French recalled. "I spent the whole night trying to keep the fever down. It was a losing battle."

French was sure the baby would be dead by the time she returned for her next shift. But, "one doctor said to another, 'If we could just get a hold of that newfangled medicine they call penicillin, it would be worth a trial,'" she recalled.

"They pulled some strings."

A military base in Minneapolis sent via plane one vial of the extremely limited new medicine, which was delivered to the hospital via cab. Civilian hospitals often couldn't acquire it at the time because troops were being prioritized and supplies were limited, she said.

The Gazette: The Last of the Greatest

French remembers carefully reading the instructions, nervously mixing the medicine and administering it to the young child twice, with four hours in between doses.

"He was sleeping peacefully when I went home that morning," she recalled, adding that the child fully recovered.

"Penicillin was such a blessing."

Of holding the rare, precious vial in her hands: "I felt like I was holding the Hope Diamond."

'Trying to save your life'

Her final stand-out patient from Fargo: A young man with a bleeding disorder. One day his wife came home from work and found him in the kitchen in a pool of blood, French recounted.

One night during his stay French peeked in on the man and shone a flashlight under his bed.

"I don't know what made me do it," she said. "To my horror, blood was dripping off his bed."

French called the man's doctor, who told his wife that her husband was "gone."

"Look, we all loved him," she recalled the doctor telling the wife. "He was a compassionate, wonderful man."

The "dynamite" wife, however, wasn't prepared to accept the news, French recalled.

"She stamped her feet and said, 'Get him some blood!'"

"Honey, it's no use," she recalled the doctor telling her.

"Get him some blood!" she demanded once more, again stamping her feet.

The doctor relented and told French to fetch some blood from the blood bank.

The doctor devised an open-cannula drip, "which was never used."

"I got down on the floor and held that man's arm until that blood was all through," she said.

In the morning she awoke on the floor, still holding the man's arm.

"What in the world are you doing on the floor?" she recalled him asking.

"Trying to save your life," she replied.

"That couple became such dear friends of mine," she said, adding that the man went on to live a fairly normal lifespan, and that he and his wife went on to have two girls.

"She saved his life by being stubborn," she fondly recalled of the wife.

Giving credit where credit's due

French would soon star in a love story of her very own.

While walking on the streets of Denver a few years later, a man shouted at her: "Don't you remember me? You took care of me."

French had once cared for the former sailor in a Veterans Administration hospital in Cheyenne, Wyo.

"He said, 'Could I have your permission to call you?'" she recalled. "It was a different world."

Nowadays French spends time reflecting on her life with her husband, who died several years ago, and her storied career.

"You wouldn't think nursing would be a dangerous career, but think about that period of time. We had no antibiotics. We had very limited surgery. Everyday we went to work, we were exposed to life-threatening illnesses we might get from our patients."

Fellow Nurse Cadet Corps vets risked it all to serve and save others, she said.

"Those girls were putting their lives on the line. They faced a lot, and they should be given credit for it."

When Phillip Allman, Jr., graduated high school in 1941, he had his sights set on two things.