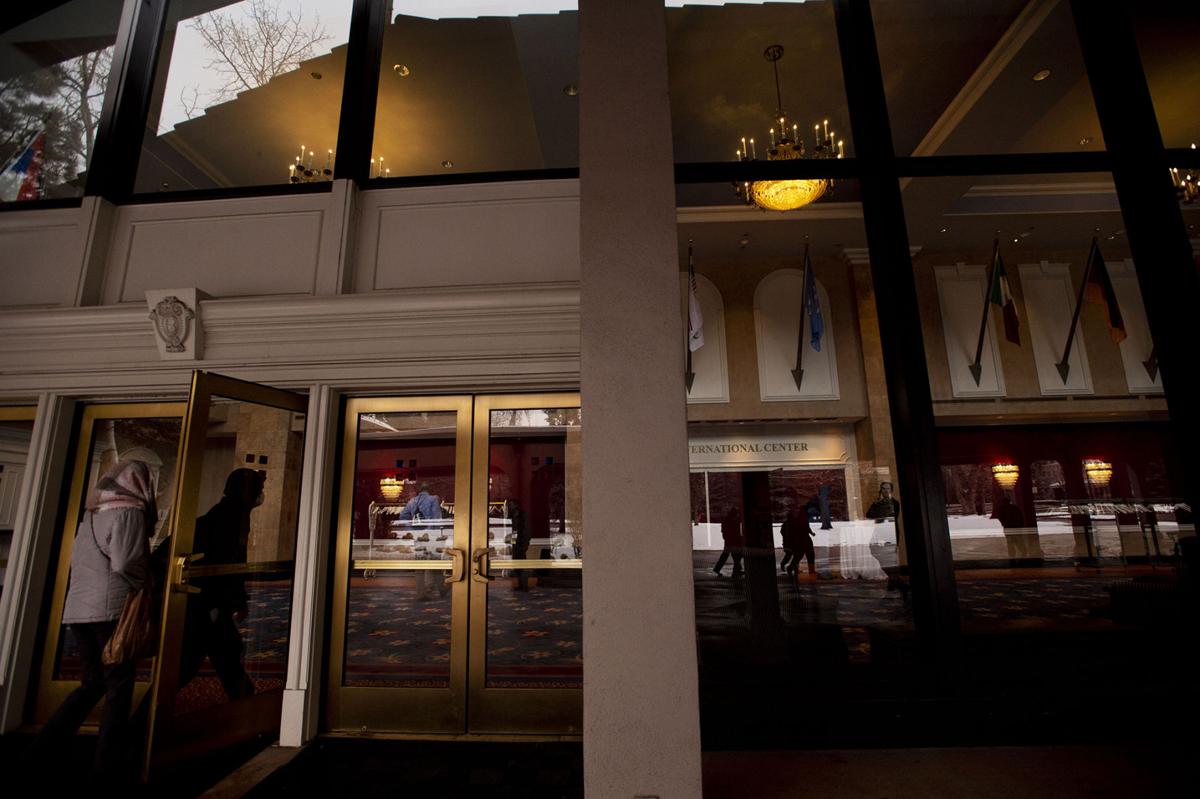 The 2020 Space Symposium is postponed due to the coronavirus. The show was set to begin Martch 30 at The Broadmoor in Colorado Springs. 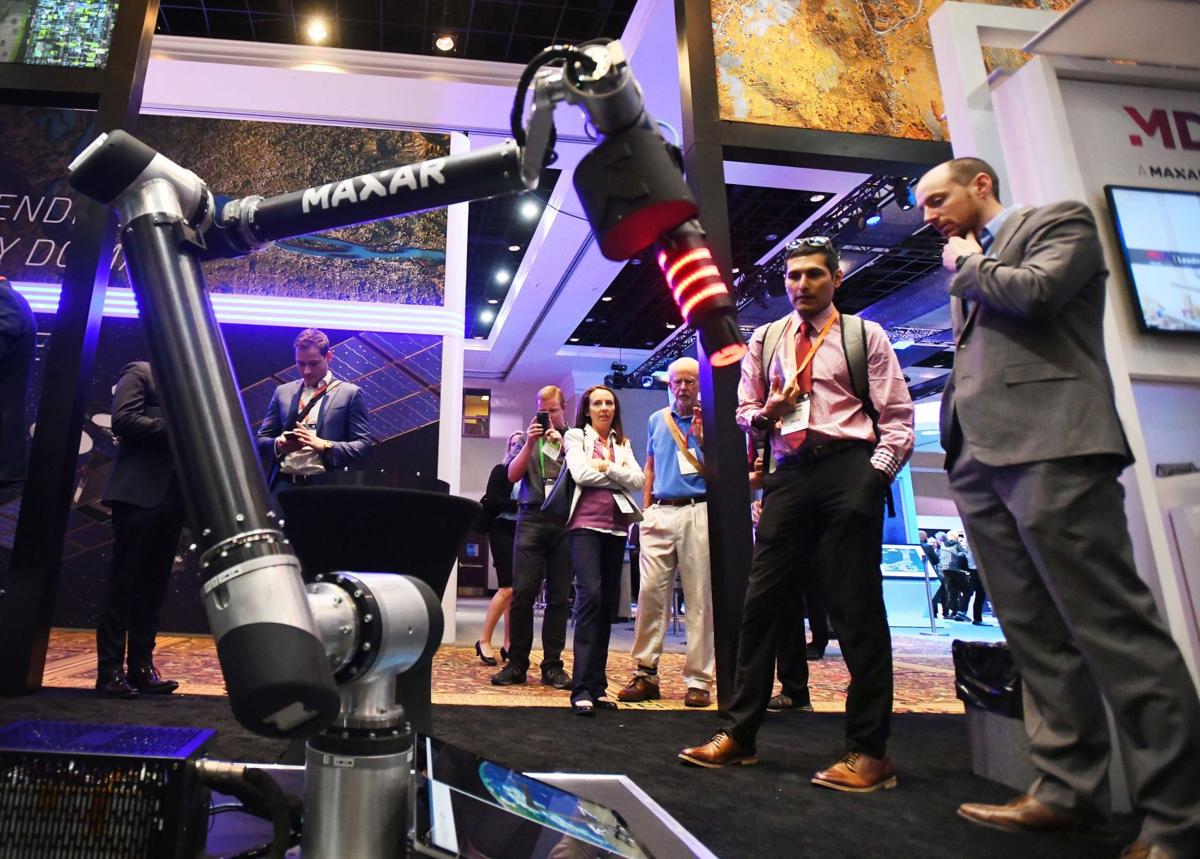 In the exhibit hall, a robotic arm with capabilities to service satellites in space at the Maxar Technologies exhibit garnered the interest of Space Symposium attendees in 2019. Maxar Technologies Inc. is a space technology company headquartered in Westminster, Colorado. Photo by Jerilee Bennett

The 2020 Space Symposium is postponed due to the coronavirus. The show was set to begin Martch 30 at The Broadmoor in Colorado Springs.

In the exhibit hall, a robotic arm with capabilities to service satellites in space at the Maxar Technologies exhibit garnered the interest of Space Symposium attendees in 2019. Maxar Technologies Inc. is a space technology company headquartered in Westminster, Colorado. Photo by Jerilee Bennett

Before coronavirus scuttled it, local leaders were looking forward to the Space Symposium as a showcase for Colorado Springs in its bid to retain U.S. Space Command.

They're not giving up.

With the postponement of the local gathering of 14,000 military and civilian space industry and government leaders that was set to begin March 30, they're taking the fight to Washington, D.C.

"The postponement gives us a chance to plan," explained Reggie Ash, who heads military and space programs for the Colorado Springs Chamber of Commerce & EDC. The chamber has rallied Colorado's leaders to the Space Command cause. From Gov. Jared Polis jumping onto President Donald Trump's plane to twist the president's arm, to an unprecedented lobbying effort on Capitol Hill, the chamber is working to showcase the Pikes Peak region's dominance in military space programs.

The reason for the lobbying is that the decision on where to house the command has been pulled from Pentagon leaders after a series of delays last year tied to lobbying efforts from states, including Alabama and Florida that have gone all-in to thwart Colorado's ambitions.

"It will be a political decision," explained retired Maj. Gen. Wes Clark, who served in top leadership positions for Air Force space programs in Colorado Springs through the 1980s.

Last year during the annual symposium, the Air Force identified Colorado as a top choice to host the command, with California and Alabama also in the race.

Local leaders were confident that Colorado Springs would come out on top after the Air Force released requirements for the new unit, which focused on a strong workforce, a military-friendly community and a high quality of life.

But last month during a campaign rally in Colorado Springs, Trump said he'll decide where the command lands.

"You are being very strongly considered for the space command, very strongly," Trump told a capacity crowd inside the Broadmoor World Arena.

Mayor John Suthers said Friday that he planned to use the symposium to woo Trump administration leaders and hoped to gain headlines from the scores of reporters who would have been in town to cover the world's largest space event.

The Space Foundation, which runs the annual event, said it's working with The Broadmoor and local leaders to reschedule the show, but the scale of the symposium, and continued uncertainty caused by the spreading coronavirus have dampened hopes that it could return anytime soon.

"It was another opportunity for us to send a message," he said.

Now, Suthers is making plans to head to Washington after the virus crisis passes where he will hunt down Trump's top allies and make his case for Colorado Springs.

Kathy Boe, founder of defense contractor Boecore and chairwoman of the Chamber of Commerce board, said even without the symposium's stage, Colorado Springs is in good position to keep the command.

"We have made some major strides," she said.

The competition for the command is driven by economics. The Trump administration has placed a major emphasis on military space programs, creating the command to oversee combat in orbit and creating Space Force, a separate armed service for satellite troops.

The command will have billions of dollars in defense contracts to offer and whatever city gets it will be home to the nation's military space industry for decades to come.

The command is small, around 1,000 troops. But it will have an annual budget that could hit $20 billion in the coming years as the military ups investments in new satellites.

"We are the epicenter for space," he said, noting Colorado is the nation's No. 2 space economy, behind California.

Colorado Springs U.S. Rep. Doug Lamborn, a Republican who sits on the House Armed Services Committee, said he has personally pushed Trump and Air Force leaders to keep the command in Colorado Springs and to announce a decision quickly.

Having politics come into play was almost expected he said. But the length of the deliberations, which could push a decision on the command that was due last summer past the November election has Lamborn irked.

Without a basing decision, leaders can't make long-term plans for the command, and troops who serve in the command are left to wonder where they will live next year.

"The whole reason for Space Command is that threat is growing," Lamborn said, noting that Russia and China, America's rivals in orbit, aren't pausing their efforts while U.S. officials ponder where to place the command.

And without the Space Symposium, where Lamborn planned to continue lobbying leaders and wooing reporters, Colorado Springs will need to find new ways to earn the command.

Retired Gen. Lance Lord, who headed the military's space efforts in the mid 2000s, said the key for Colorado Springs is to keep up the pressure.

"We caught the bus," Lord said. "Now we just need to ride it home."

In a major blow to the area's economy, the Space Symposium — the world's largest space show — has been postponed as a result of the spread of …