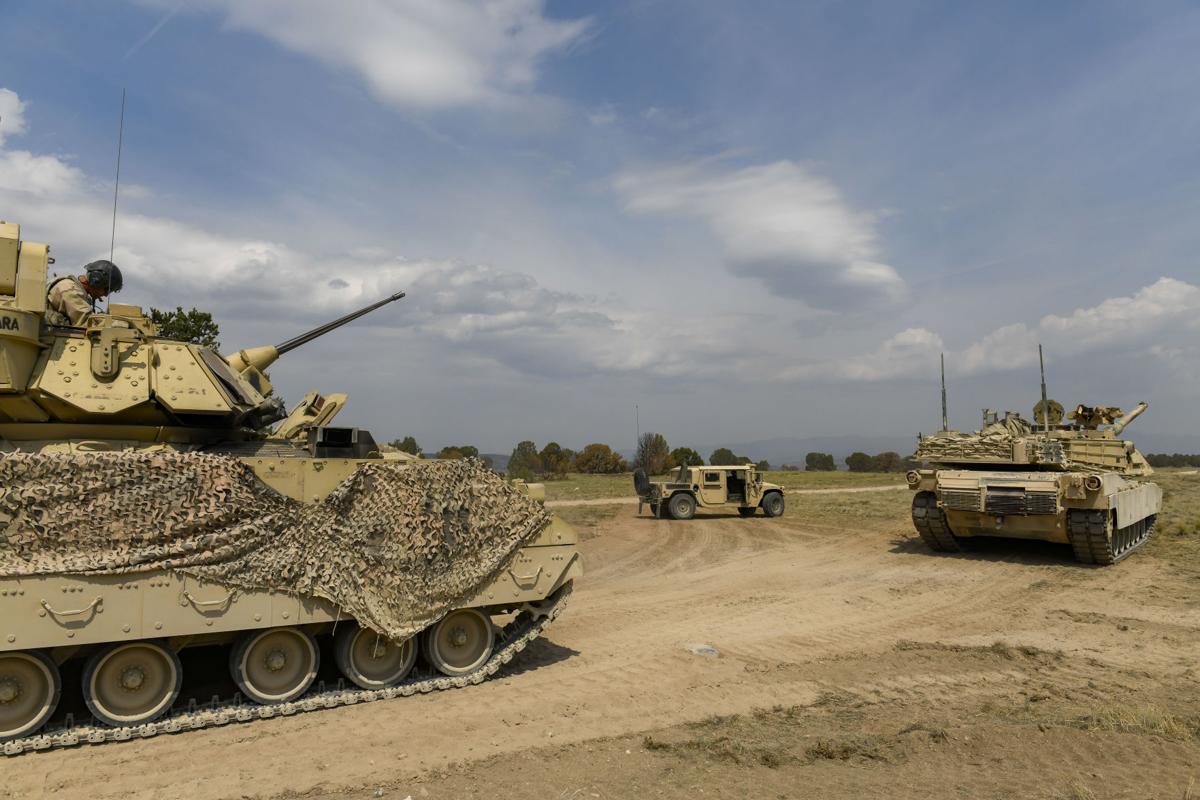 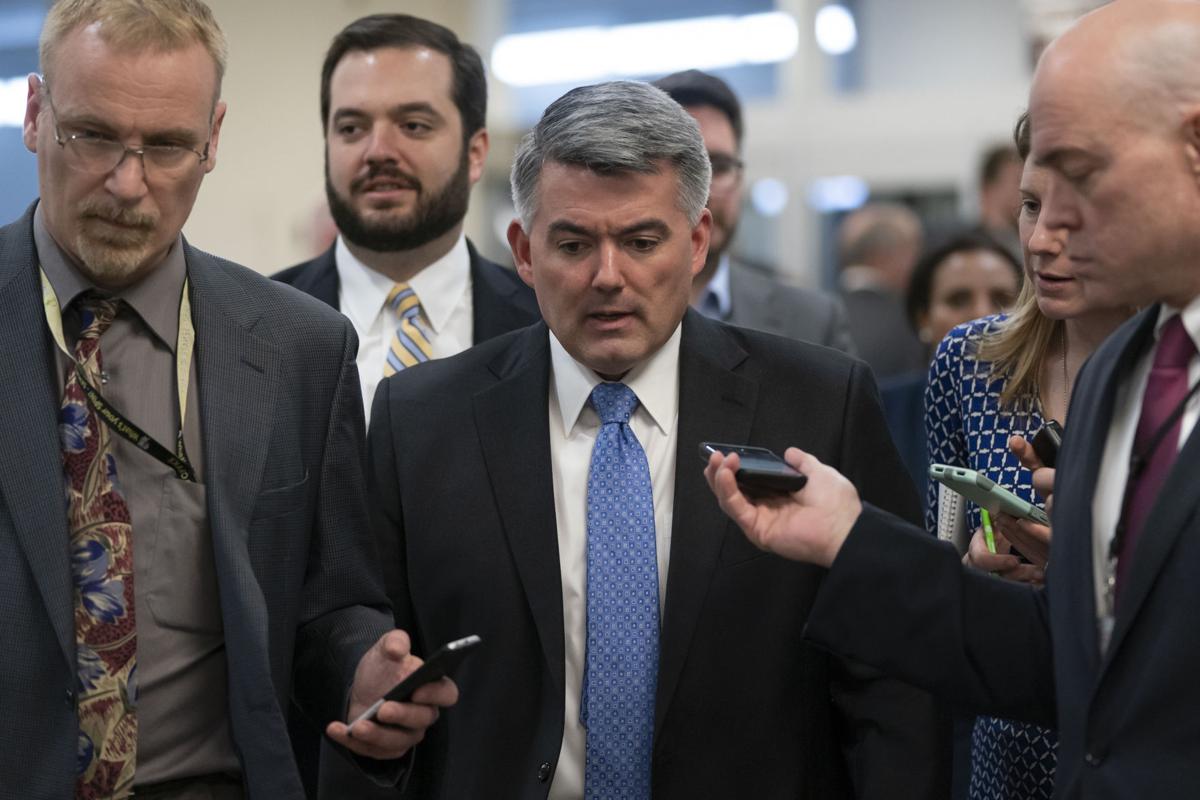 Reporters pose questions to Sen. Cory Gardner, R-Colo., on his way to a vote as an 11th-hour Republican rescue mission to keep President Donald Trump from a Senate defeat on his signature issue of building barriers along the southwest border seems near collapse, at the Capitol in Washington, Wednesday, March 13, 2019. 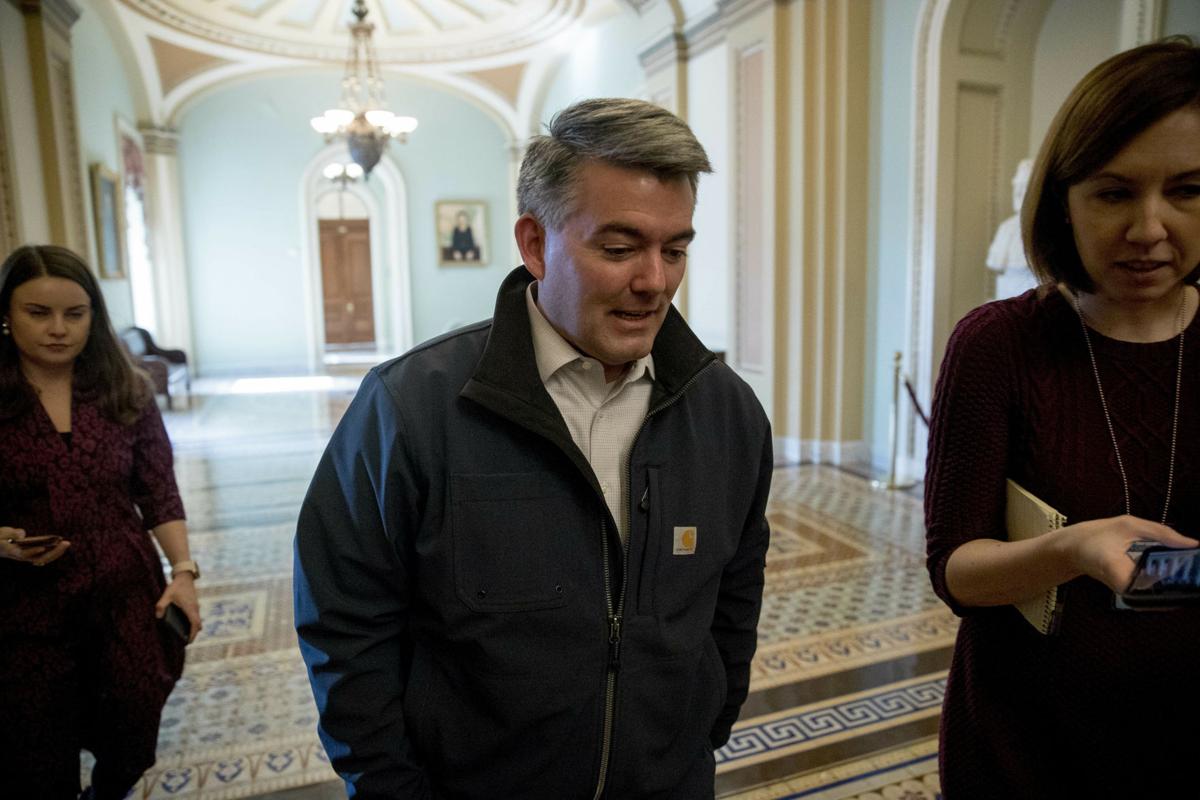 Sen. Cory Gardner, R-Colo., speaks as he walks into a closed-door meeting with Senate Republicans on Capitol Hill in Washington in January.

Reporters pose questions to Sen. Cory Gardner, R-Colo., on his way to a vote as an 11th-hour Republican rescue mission to keep President Donald Trump from a Senate defeat on his signature issue of building barriers along the southwest border seems near collapse, at the Capitol in Washington, Wednesday, March 13, 2019.

Sen. Cory Gardner, R-Colo., speaks as he walks into a closed-door meeting with Senate Republicans on Capitol Hill in Washington in January.

The Trump administration’s border wall project could raid $77 million in construction money from Fort Carson, according to a Pentagon list released to Congress on Monday.

The list, released to The Gazette by U.S. Sen. Jack Reed, D-R.I., ranking member of the Senate Armed Services Committee, puts more than $10 billion in military construction projects across the country and abroad on the chopping block since President Donald Trump declared a national emergency to build the barrier along the Mexican border. The emergency allows Trump to pull money from Pentagon accounts.

Projects on the list have been authorized but not started. The Pentagon says not all of them would be canceled for the wall, but officials didn’t identify which would be spared.

U.S. Sen. Cory Gardner, R-Colo., exacted a promise from the Trump administration last week that Colorado military construction money wouldn’t be “repurposed” for the wall, a promise that spokesman Jerrod Dobkin emphasized Monday. But the Pentagon included the Fort Carson project on its list.

Fort Carson was to provide troops with a long-awaited, improved vehicle maintenance shop to repair the post’s aging fleet of trucks, tanks and Humvees.

“We know President Trump wants to take money from our national security accounts to pay for his wall, and now we have a list of some of the projects and needed base repairs that could be derailed or put on the chopping block as a result,” Reed said in a statement.

Trump drove a partial government shutdown in pursuit of the wall, a key promise from his 2016 campaign. After lawmakers refused to budge on that money, Trump declared an emergency under a federal law that allows him to reprogram Pentagon construction cash to deal with a crisis.

Lawmakers this month demanded a list of projects that would be scuttled. But the Pentagon told lawmakers those projects could continue if the “budget is enacted on time as requested.”

In essence, if Trump doesn’t get the $8.6 billion in border wall money that he added to the 2020 Pentagon budget proposal, the 21-page list of military projects faces the ax.

Lawmakers last week passed a bill to reject Trump’s use of emergency powers for the wall. That measure passed Congress but was felled by Trump’s first veto. Lawmakers now are mulling whether they have the votes to override Trump’s veto, a difficult exercise that would require a substantial number of Republicans to join in.

Use of emergency money for the wall has drawn criticism from both sides of the aisle, with conservatives, including U.S. Rep. Doug Lamborn, R-Colorado Springs, questioning the cancellation of planned military projects to pay for the wall.

Trump on Sunday praised lawmakers who support his wall plan.

“Those Republican Senators who voted in favor of Strong Border Security (and the Wall) are being uniformly praised as they return to their States,” Trump wrote on Twitter. “They know there is a National Emergency at the Southern Border, and they had the courage to ACT. Great job!”

Reed said the list could turn up the heat on lawmakers who support Trump’s wall. Lamborn has supported the wall while questioning its funding method.

“Now that members of Congress can see the potential impact this proposal could have on projects in their home states, I hope they will take that into consideration before the vote to override the President’s veto,” Reed wrote.

“Now we have a list of some of the
projects and needed base repairs that could be derailed” as a result of Trump’s plan to fund a border wall. Sen. Jack Reed, D-R.I., Armed Services Committee

On centennial, Colorado Springs American Legion post looks to past for its future path

As they celebrate their centennial, Legionnaires in Colorado Springs hope ideas from their organization’s origins can lead them into the future.