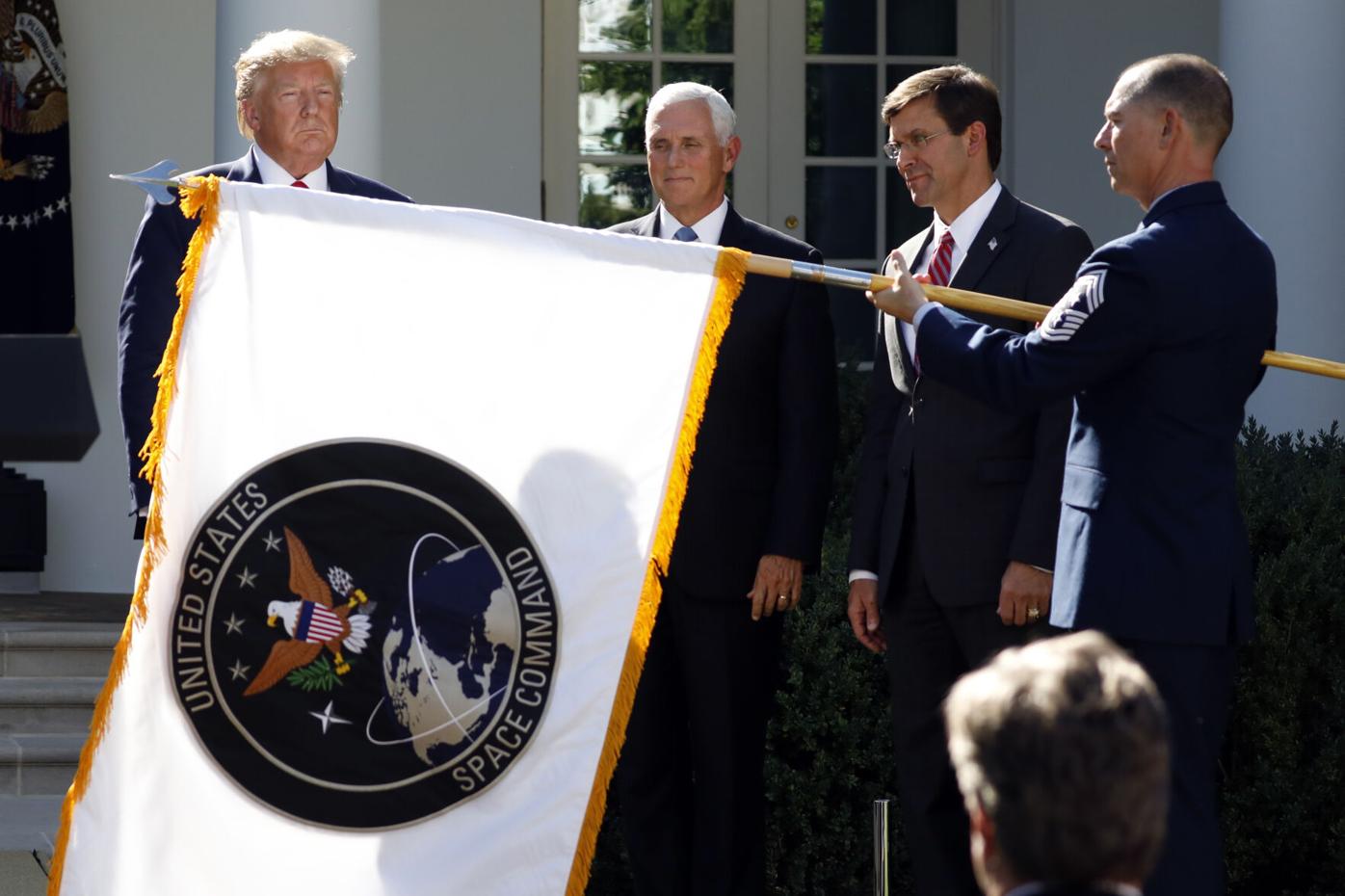 Former President Donald Trump watches with Vice President Mike Pence and Defense Secretary Mark Esper as the flag for U.S. Space Command is unfurled at the White House in Washington in 2019. 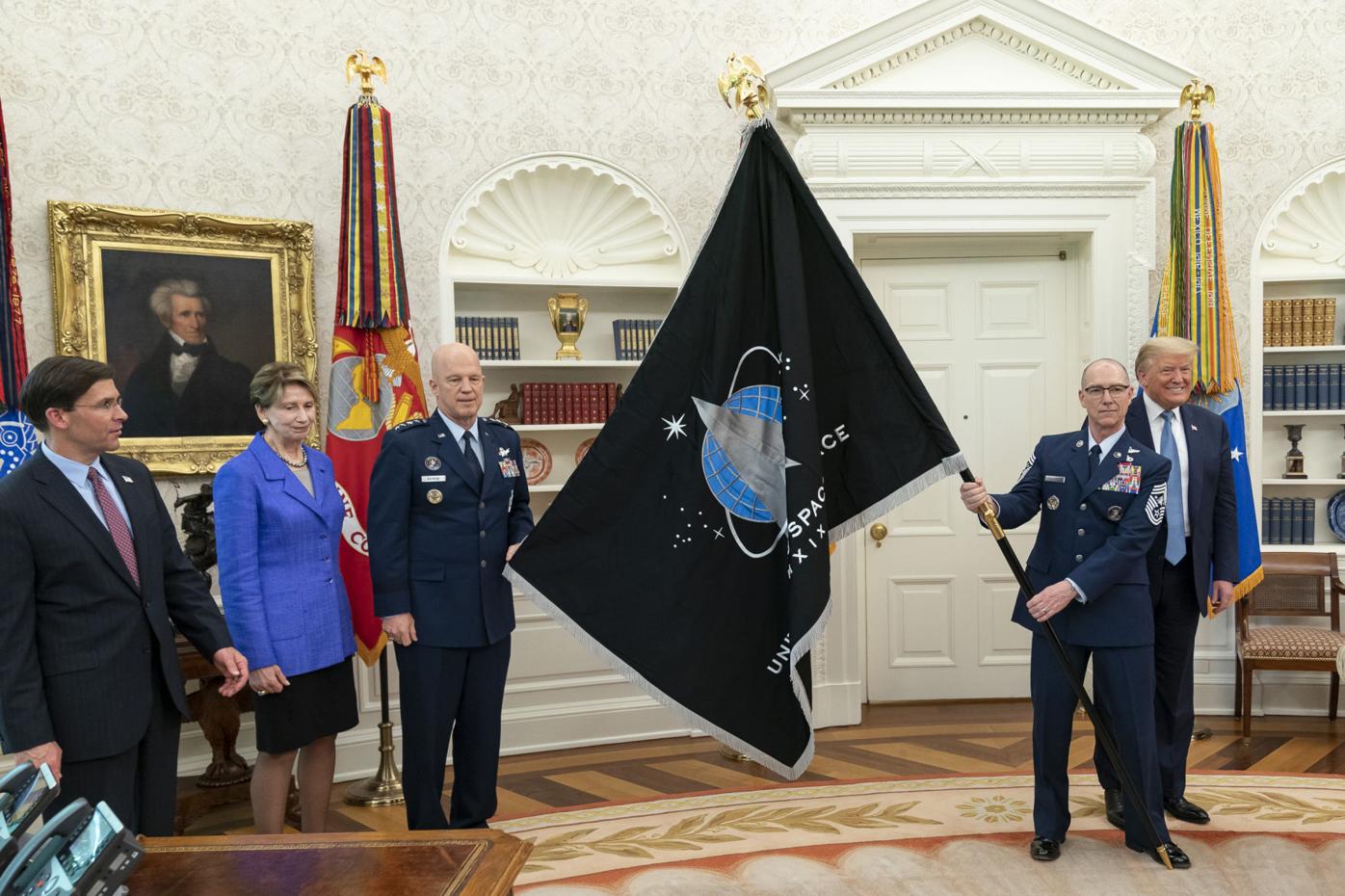 Former President Donald Trump watches with Vice President Mike Pence and Defense Secretary Mark Esper as the flag for U.S. Space Command is unfurled at the White House in Washington in 2019.

Speaking to "Rick and Bubba," an Alabama-based syndicated talk show, Trump said he alone chose to uproot the command from Colorado Springs and move it to Huntsville, Ala.

"I single-handedly said 'let's go to Alabama,'" Trump said, contradicting Pentagon statements that Huntsville was picked by a nonpartisan process that weighed Colorado Springs and other suitors for the command independently.

In the radio interview, Trump conflated the command — which oversees military missions in space for all armed services — with the new Space Force, a separate armed service for satellite troops.

The interview came ahead of an appearance by Trump Saturday night at an Alabama campaign-style rally that was expected to draw thousands of supporters.

Trump's Jan. 13 decision to move the command, which was reestablished in Colorado Springs in 2019, remains under investigation by the Pentagon's Inspector General and the Government Accountability Office. Anonymous military sources told The Gazette of Trump's role in the decision as soon as it was announced.

Colorado Springs Mayor John Suthers said Trump's Friday radio interview should be enough to prompt a re-examination of the decision.

“We have maintained throughout the process that the permanent basing decision for U.S. Space Command was not made on merit. The admission by former President Trump that he ‘single-handedly’ directed the move to Huntsville, Alabama, supports our position," Suthers said via email.

"Our local governments and our Congressional delegation will continue to press our case in Congress and at the White House to re-examine and ultimately overturn the move in the best interest of our nation."

U.S. Space Command was recreated by the Trump administration to address rising threats from Russia and China to U.S. spacecraft. An earlier version of the command had been based at recently renamed Peterson Space Force Base until the command was shuttered amid post-Cold War belt-tightening in 2002.

Colorado Springs was picked as the initial home for the new version of the command because it contains the bulk of the military's space troops along with units that control most of the military's satellites and a center that brings together experts from the military, intelligence agencies and allies to set strategy that would be used if a war hits orbit.

An earlier Air Force decision will keep the command in Colorado Springs until at least 2026. Congress hasn't allocated money for the move, and the Pentagon has not issued contracts that would be necessary to relocate Space Command.

"U.S. Space Command was reestablished due to the criticality of its mission," the generals wrote. "Making a location decision without fully evaluating cost and time to achieve full mission capability has resulted in a decision that makes America vulnerable."

"When a decision is based on politics and personal preference, national security comes in second," said Lamborn, a longtime Trump supporter who broke with the president over the basing decision.

The congressman said the decision also shows that Pentagon officials might have lied to lawmakers when they said Alabama was chosen based solely on military criteria.

"The Air Force was not telling us the truth when they said it was based solely on merit," Lamborn charged.

"These callous comments fly in the face of Coloradans, military families, and those who have worked to cultivate our aerospace ecosystem that is suited to guarantee the operational success of U.S. Space Command and deliver the best value to taxpayers," the said in an email.

In a unanimous statement, El Paso County commissioners pledged to redouble their efforts to get the move rescinded.

"On its merits, its obvious Space Command needs to stay in Colorado Springs," they said. "It makes no sense to spend billions of taxpayer dollars and gain no mission enhancement by moving Space Command from its current location, the home to many critical space missions."

Reggie Ash, who heads military programs for the Colorado Springs Chamber & EDC, said Friday's declaration by Trump confirmed a key argument local leaders have used in a bid to overturn the Alabama decision.

"As we’ve said all along, Space Command’s basing decision needs to be determined by merit, not politics," Ash said. "Now that the former president is confirming what we’ve been saying all along, we again urge President Biden to overturn that decision now. Keeping Space Command in Colorado Springs avoids disrupting operations and interfering with their critical national security mission. Staying in Colorado Springs is the most cost effective, least risky, and overall best choice for the mission."

Alabama had been angling for the command for years, with Alabama U.S. Rep. Mike Rogers being one of the first lawmakers to push for its creation.

The Alabama decision came after a process to pick a permanent home for the command was stopped and restarted by the Pentagon several times.

The Alabama announcement came one week after a Trump rally in Washington decrying the results of the 2020 election preceded a riot that spilled into the U.S. Capitol where lawmakers were certifying the election result.

Space Symposium: Colorado aerospace industry the Mall of America for all things in orbit

If you are shopping for space technology, Colorado is the Mall of America for all things in orbit.