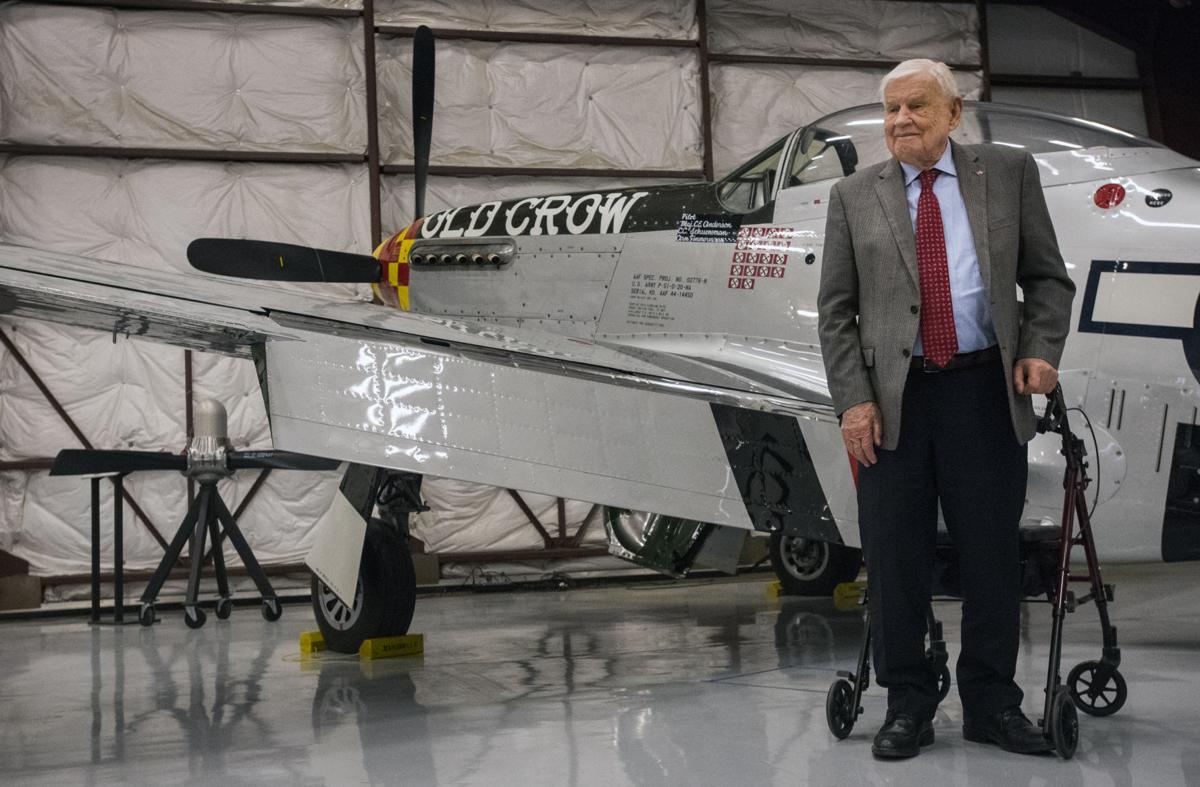 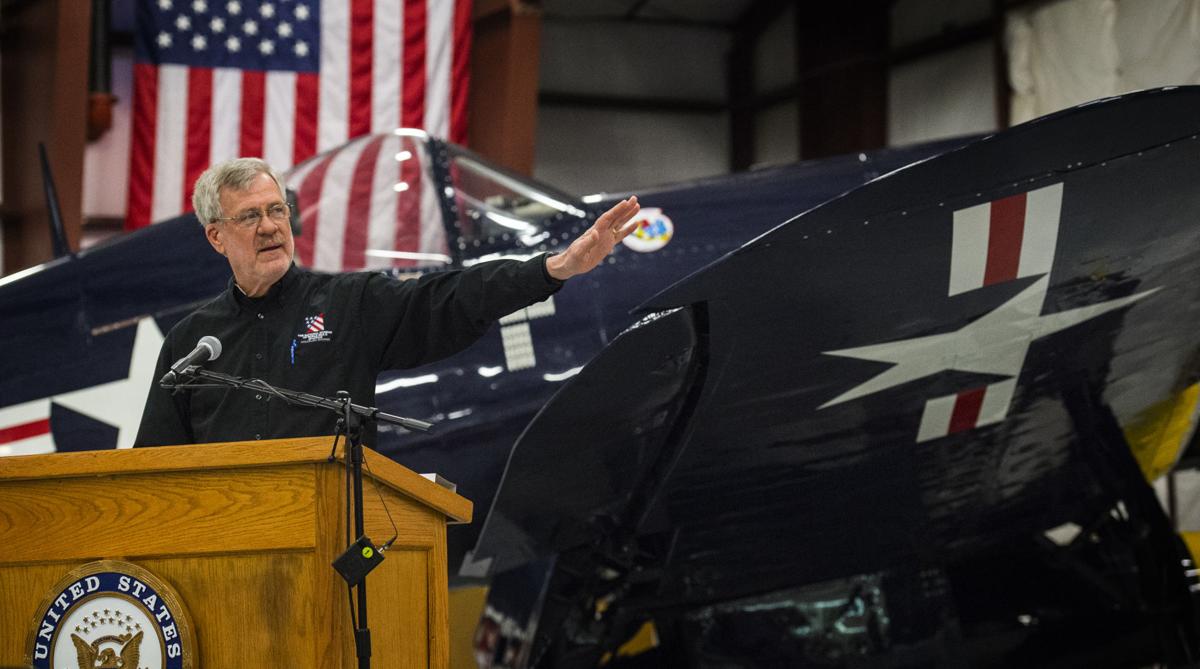 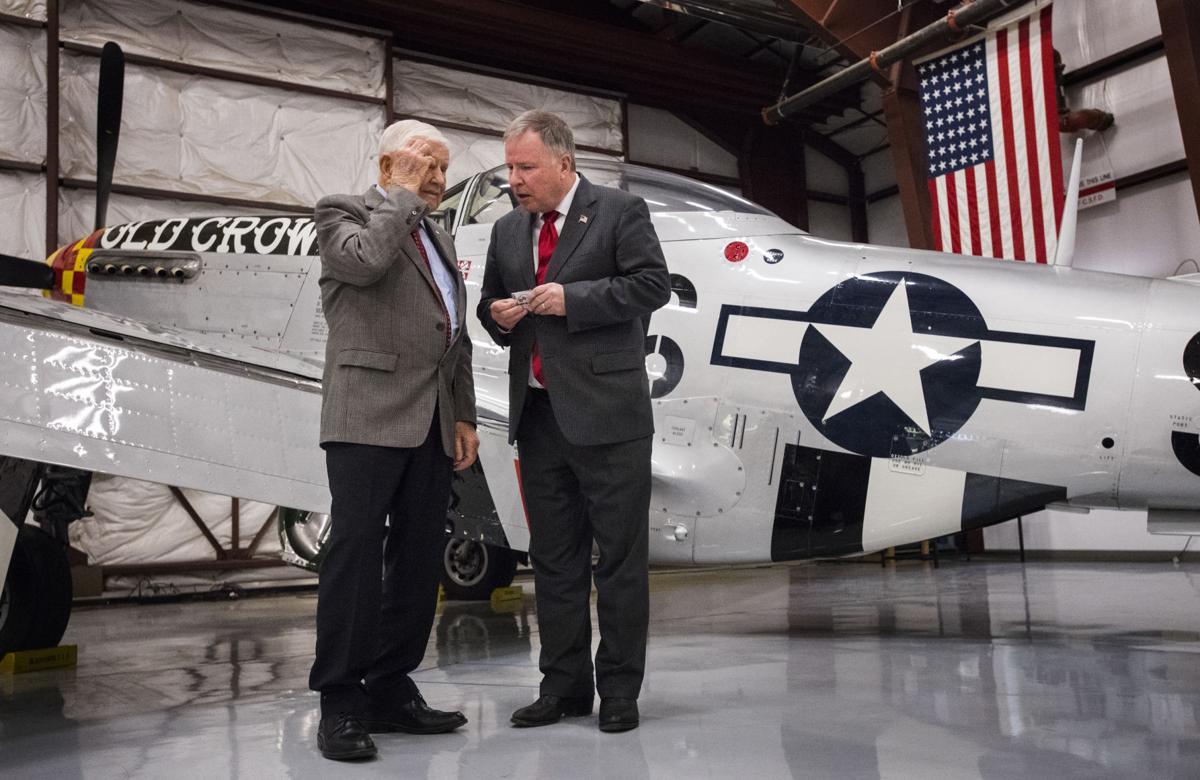 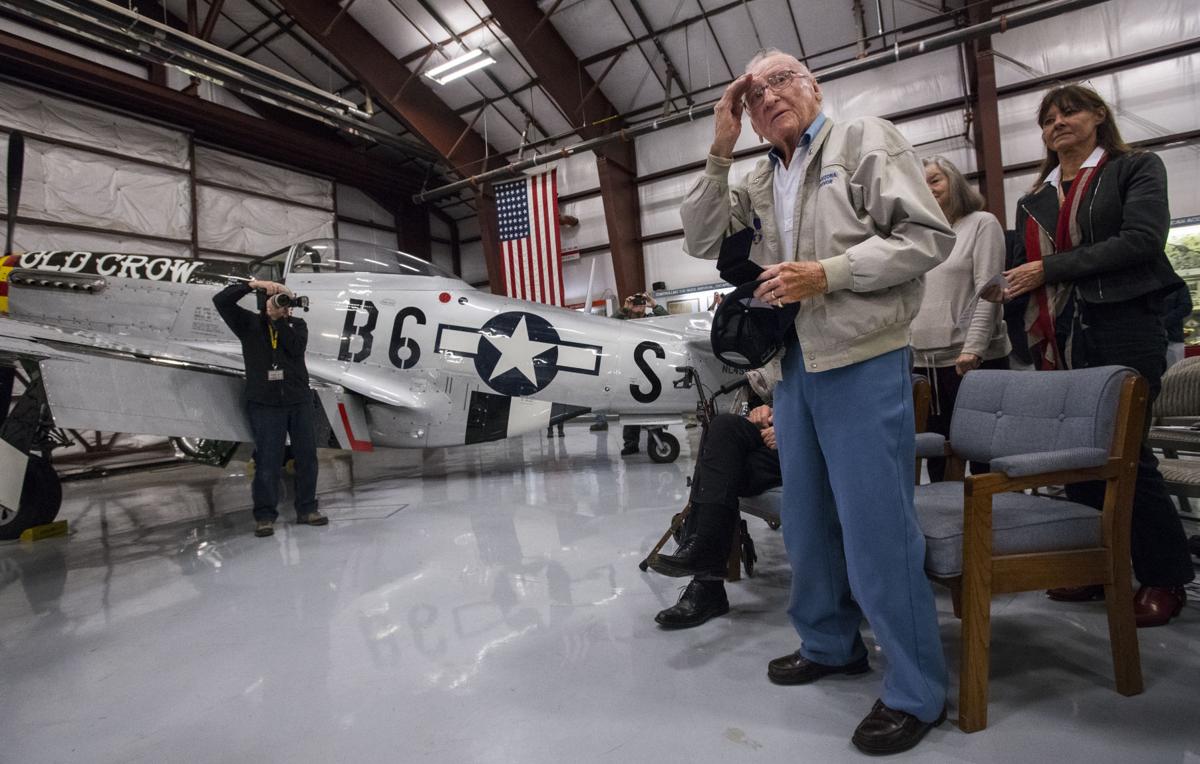 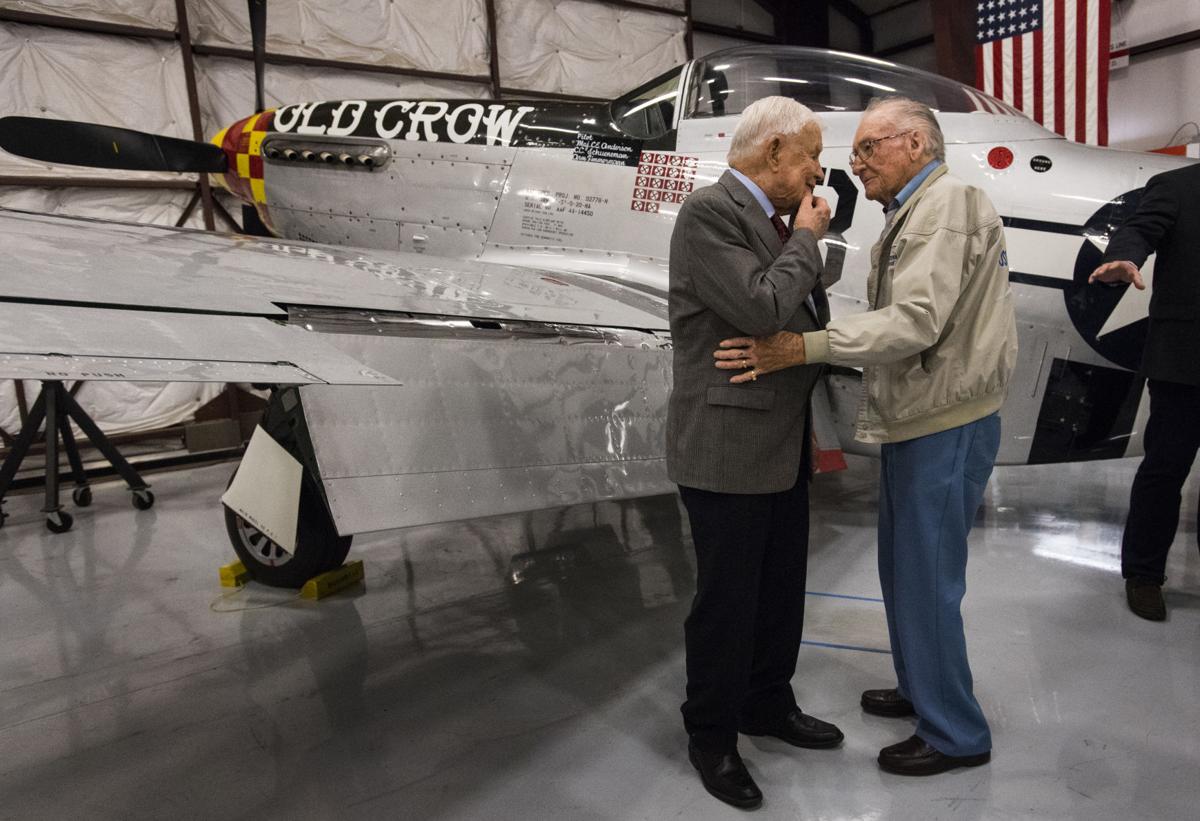 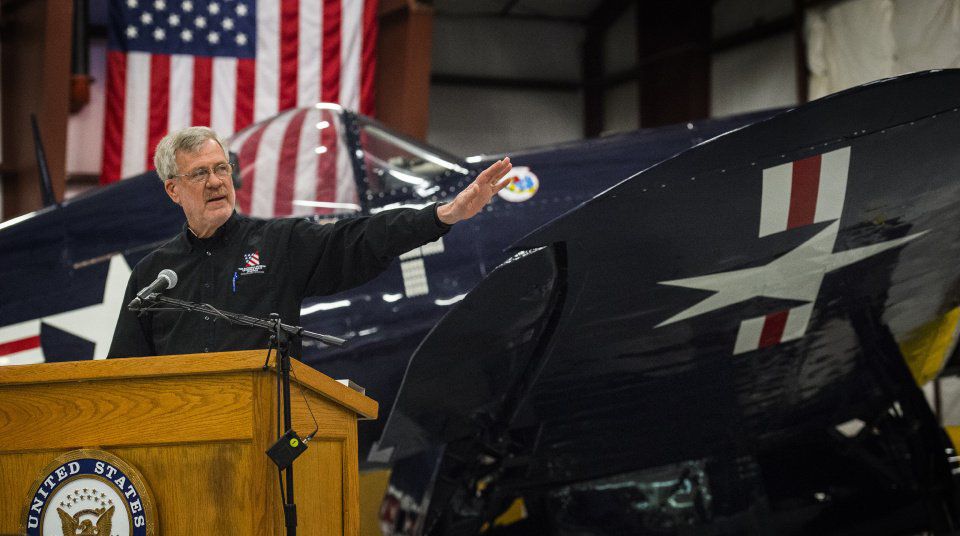 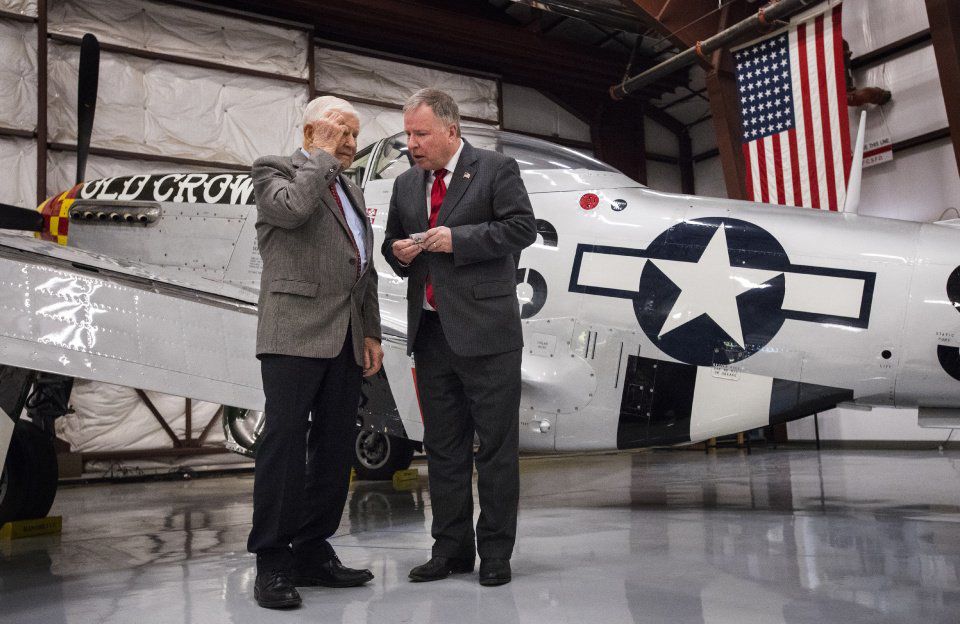 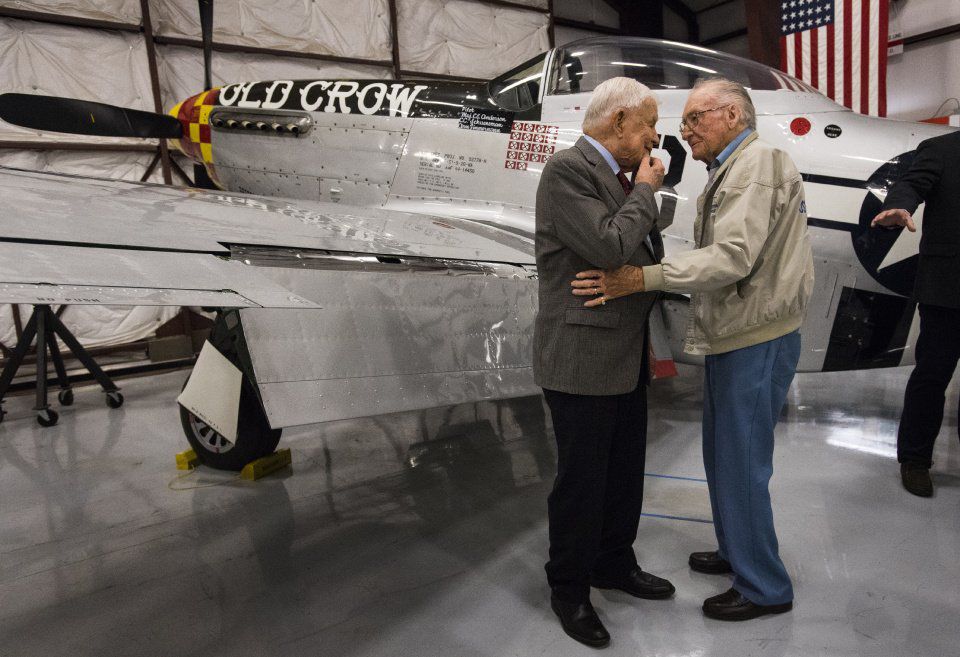 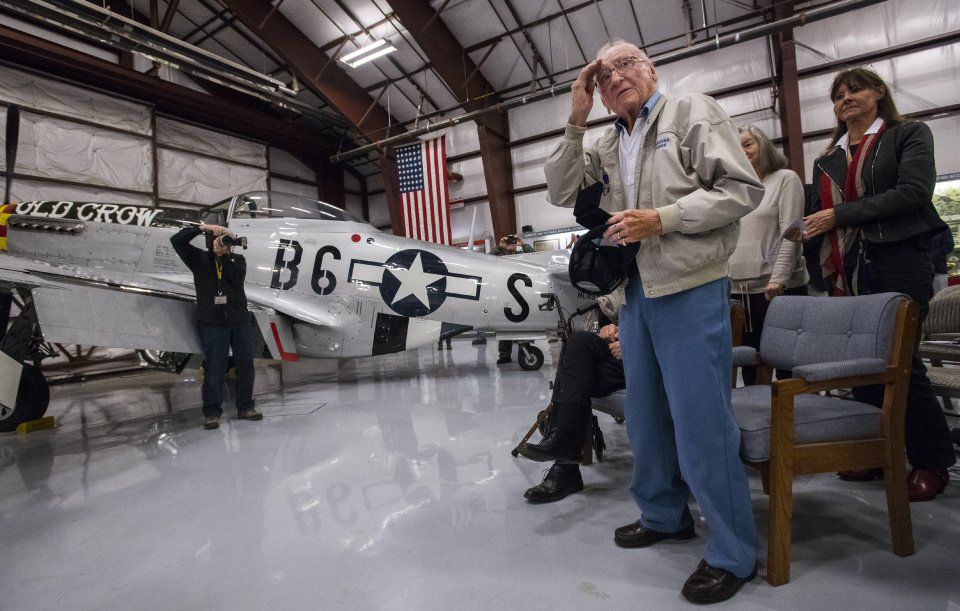 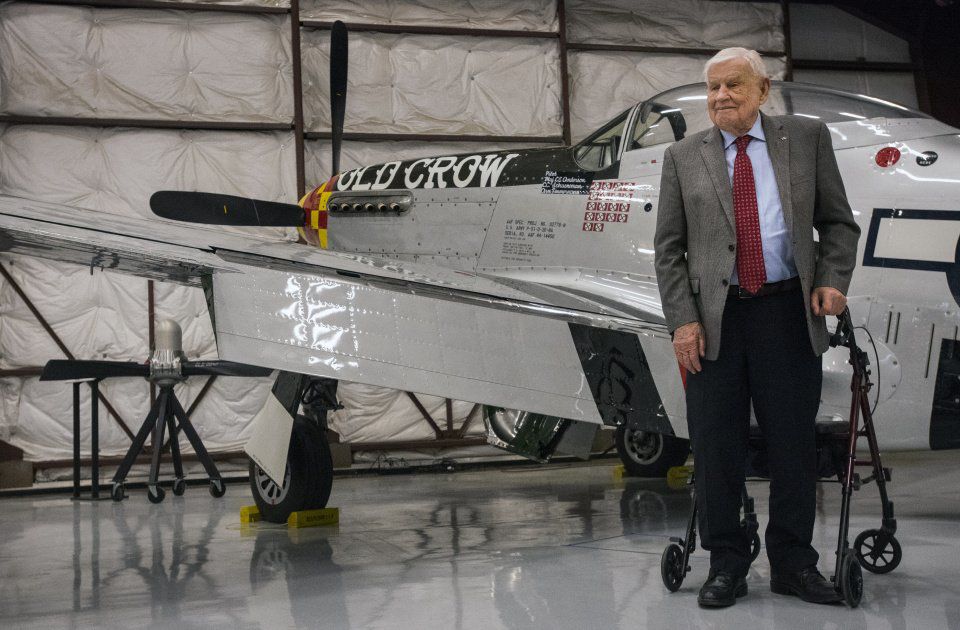 Anderson, 96, who flew 116 combat missions escorting heavy bombers during the war, destroyed more than 16 enemy aircraft in dogfights and another on the ground. He is the war's last surviving American triple ace.

U.S. Rep. Doug Lamborn, R-Colorado Springs, who introduced a measure honoring the museum in 2010 - two years before it had even opened - also attended the ceremony.

The P-51 was flown in as a surprise for Anderson from the National Warbird Hall of Fame in OshKosh, Wis. Anderson was shocked to see it when he walked in, saying, "It's always great to have a Mustang around. But to have one with your own markings on it is incredible."

"Old Crow," the name of Anderson's plane - an homage, according to Anderson, "to that good ol' Kentucky straight bourbon whiskey" - gleamed on the cowling behind the plane's nose under the hangar's fluorescent lights.

Reuniting pilots with planes is an important function of the National Museum of WWII Aviation. Bill Klaers, museum president and the head of affiliated Westpac Restorations, was inspired in part to take over the museum at the Colorado Springs Airport eight years ago from its founder after two former pilots recognized planes they had flown during World War II that were being restored in Westpac's hangar.

The museum has been pursuing national recognition ever since.

The designation has only been awarded to 12 other museums across the U.S., according to Lamborn, one of the congressional sponsors along with Sens. Michael Bennet, a Democrat, and Cory Gardner, a Republican.

The museum prides itself on being a "living museum" - all of its 23 planes are restored to flying condition.

"Kids today don't even know what WWII was because the teachers don't know. . When we got here, you couldn't even teach WWII within the Standards of Learning in Colorado Springs," Klaers said.

Lead docent Phil Heacock says having restored WWII planes that young people can touch helps them connect with the history.

After the ceremony, a crumbling, dirt-encrusted carcass of a plane that had been dug out of the ground half a world away was wheeled into the area where the 300 attendees had been sitting. Another piece of a plane that smelled like gasoline was rolled back next to the flight simulator.

"I think it's nice for us to come in and see physical evidence of this rather than learning from a book that, 'so and so' did this, or that, 'this happened.' It's nice to get these physical things," said Corey Patton Lossner, a Cheyenne Mountain High School senior who attended the ceremony as one of Lamborn's congressional nominees to attend the U.S. Military Academy at West Point.

Klaers and Heacock said the national designation will give the museum the prestige its collection deserves, help attract donations, and foster collaboration with other high-profile museums and foundations.

During the ceremony, Klaers said a $16.5 million donation from the philanthropic Shook family would enable the museum to add an 80,000-square-foot hangar.

"And the catalyst was not so much the money or the donation of the aircraft, it was bringing the national designation," he said.

The addition will allow the museum to display all its aircraft, some of which are stored in Pueblo, Texas and Arizona because of lack of space in Colorado Springs.

Walking around the hangar, Bob Waltzer, a retired airman who drove up for the day from Pueblo, said he has been to a lot of air museums, but this was his first time to a museum dedicated solely to WWII aviation.

"I've been to a lot of aviation museums where you walk in and it looks like a junkyard, but this thing is primo."

A rapid-fire construction project will allow the National Museum of World War II Aviation to have more planes on display by spring. The museum, on the west side of the Colorado Springs Airport, broke ground on the new exhibit hall Wednesday, with five World War II veterans manning the shovels. The long-planned expansion will house aircraft including a pair of flying boats used during the war and two one-of-a-kind fighters.