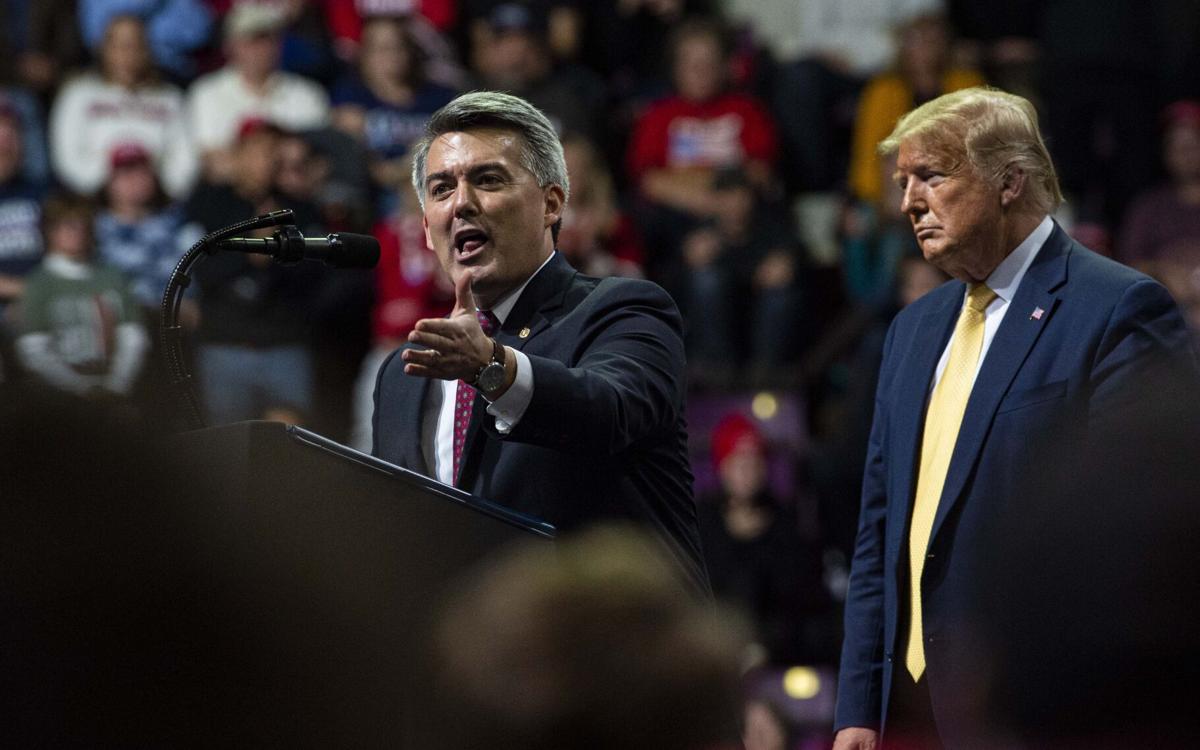 U.S. Sen. Cory Gardner, R-Colo., speaks as President Donald Trump looks on during a rally at The Broadmoor World Arena in February. 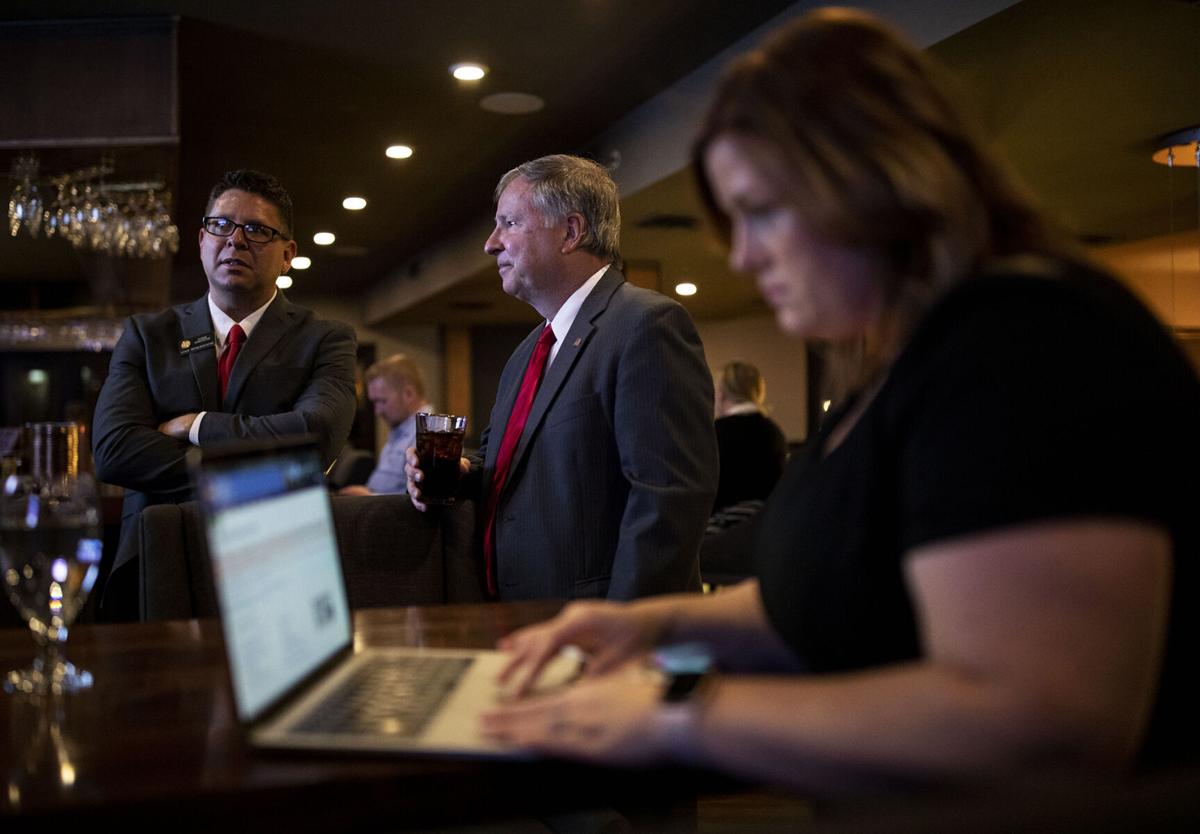 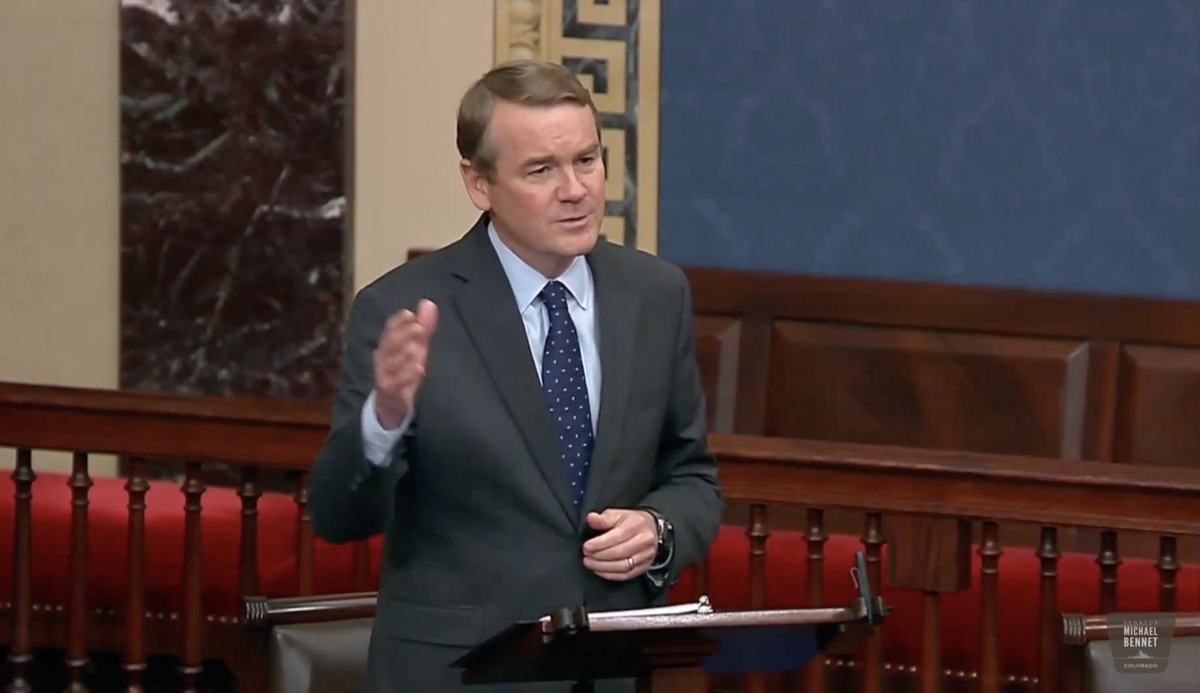 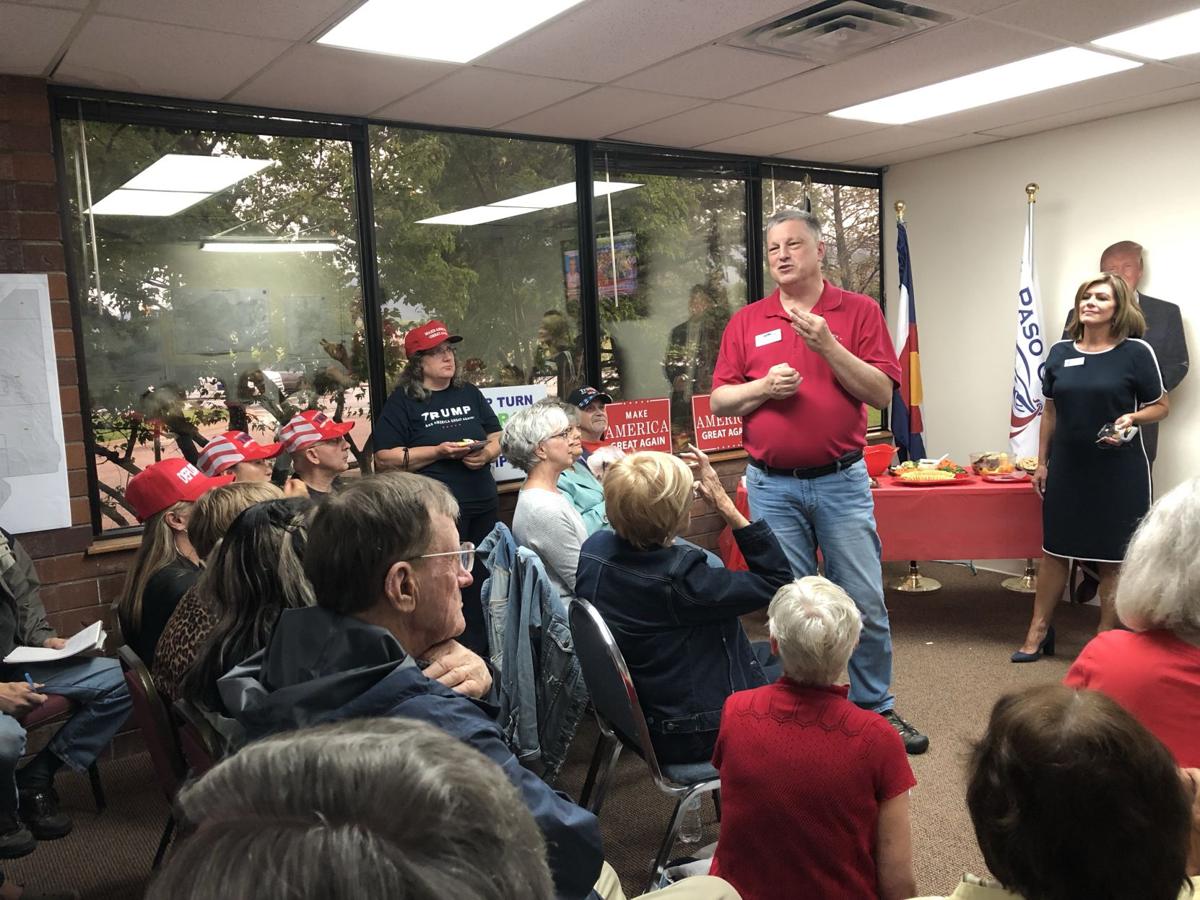 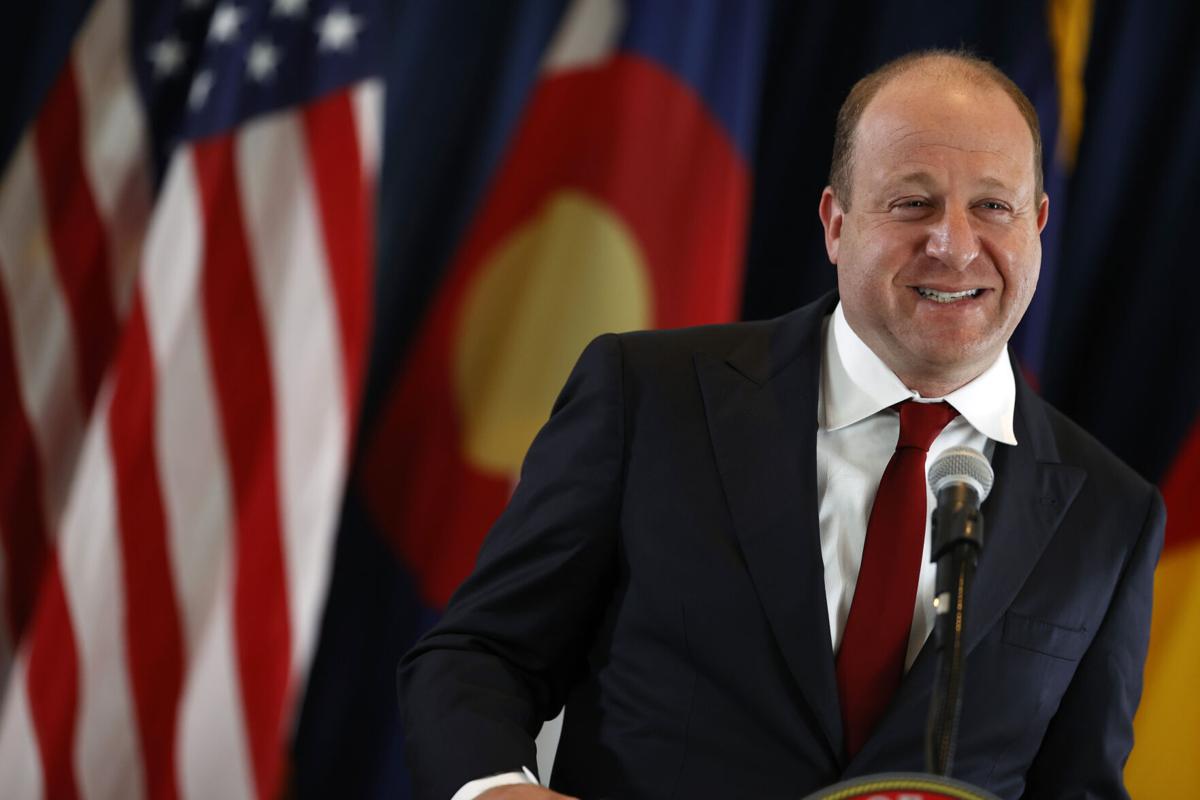 Gov. Jared Polis makes a point during a news conference on the state’s efforts to curb the spread of the coronavirus June 24, 2020 in Denver. 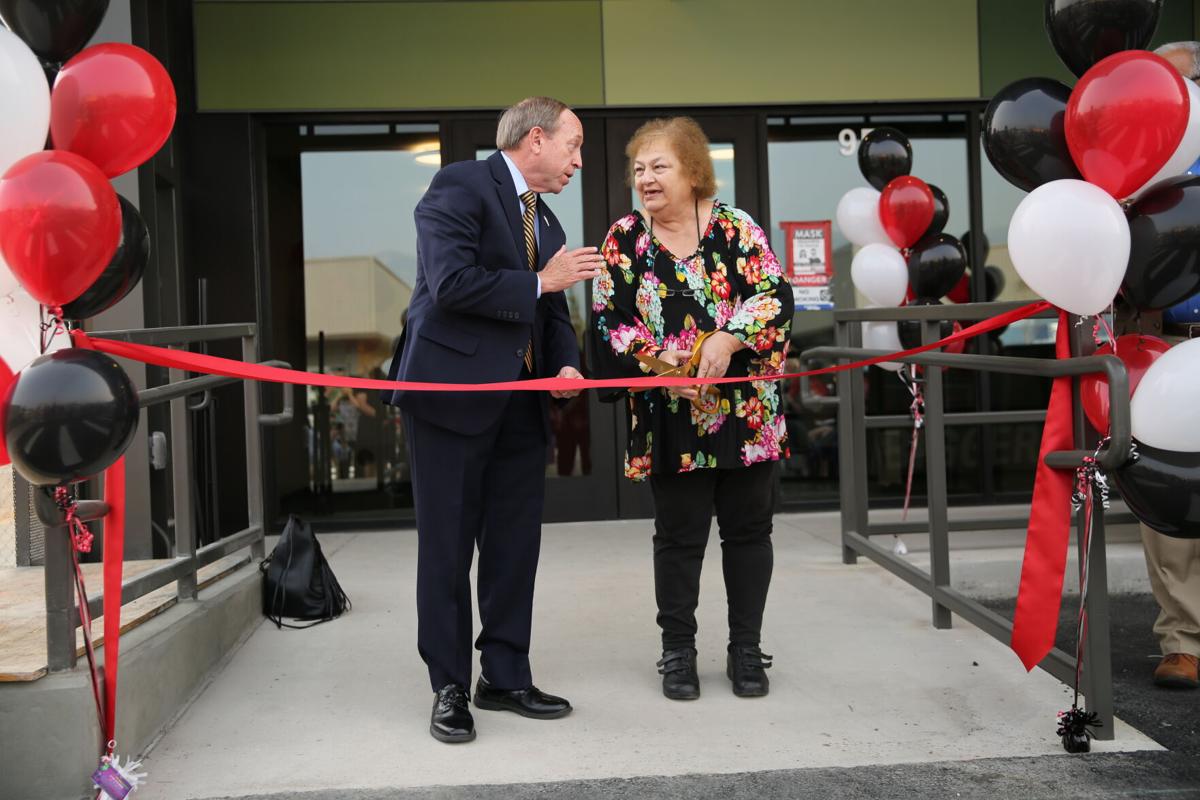 Colorado Springs Mayor John Suthers, left, and Marilyn Vyzourek, right, prepare to cut the ribbon during the grand opening ceremony for the new dining hall and kitchen at the Springs Rescue Mission on West Las Vegas Street on Sept. 17, 2020. The new dining hall can seat up to 185 people comfortably and has a significantly larger kitchen than the previous building. (Forrest Czarnecki/The Gazette)

U.S. Space Command was a campaign issue in November, with U.S. Sen. Cory Gardner and former Gov. John Hickenlooper, in his Senate bid, claiming their leadership would help keep the lucrative headquarters in Colorado for good.

In truth, every federal-level politician from Colorado has pushed for the command to stay in the Rockies, and top state and local leaders also have been pulling for the Pentagon to cement it here permanently.

Full coverage of the race for Space Command

With an evaluation team from the Pentagon meeting with Colorado Springs officials this week to judge whether the city should keep the command, politicians are pushing harder than ever.

Here are five of the politicians who have been pushing for U.S. Space Command to stay in Colorado and the roles they have played.

Colorado Springs Republican U.S. Rep. Doug Lamborn, a 14-year veteran of Congress, has watched the twists and turns of the competition like a hawk, using his post on the House Armed Services Committee to provide every bit of leverage it can.

“I think we are still in the best position of anyone out there,” Lamborn said.

The congressman was lighting up telephone lines last week in preparation for the visit of the Pentagon’s evaluation team to Colorado Springs. Lamborn focused on Assistant Air Force Secretary John Henderson, who will play a key role in the decision in his post as the service’s head of installation management.

“I was very encouraged,” Lamborn said of his talk with Henderson.

Lamborn points to the Pentagon’s budget, which has already set aside $800 million for a new space operations center in Colorado Springs, as a top reason to keep the command here. He said that money and more would have to be spent again if the command is moved elsewhere.

He also says the region has the workers Space Command needs, the community support it treasures and the intangibles its troops relish.

Lamborn said Colorado Springs also offers the new Space Force a place it can claim as a hometown.

“It's an opportunity to establish a separate and unique culture,” he said. “And you may as well do that where the culture already runs deep.”

Elected in 2018, Gov Jared Polis has spent his first two years in office pushing for U.S. Space Command to stay in Colorado.

The Democrat, who made a fortune with online florist ProFlowers, has served in Congress and shepherded legislation in recent years to make the state more attractive to the Pentagon.

"We have been being active in signing and pushing through legislation to make our state even more military friendly," he said.

Among the measures was a bill that allows military spouses to easily transfer professional licenses to the state. The move allows a spouse who holds an out-of-state professional license — from teaching to boxing — to work here on temporary credentials for up to three years, the length of the average military tour in the state.

Polis, wearing a business suit and his trademark tennis shoes, sprinted up the stairs to board Air Force One in February to twist President Donald Trump's arm on the Space Command issue during a 20-minute meeting ahead of a Colorado Springs campaign rally.

"I have had at least three personal conversations with President Trump, including one on Air Force One," he said.

Although the Air Force restarted its process to find a home for the command after those meetings, Polis has kept talking to federal leaders.

His selling point: Space Command is already here and has the facilities and local support it needs to get the job done.

"I really think we are the best for readiness," he said. "Any other site would require a lot of different costs that would be saved if they keep it here."

A lifelong Republican and former Colorado secretary of state, Wayne Williams has worked quietly from his post on the Colorado Springs City Council to keep U.S. Space Command in town.

“Colorado Springs will absolutely be the best place for Space Command,” Williams said. “The first factor should be on whether the military members feel comfortable calling a place home.”

The council also oversees Colorado Springs Utilities, which Williams says could put the city over the top in its bid to keep the command.

“I can tell you our utility service and its reliability, which is absolutely critical when you are talking about something that requires continuous power, is the best in the country,” Williams said.

The utility, he said, is prepared to offer the command extra measures to ensure its computers and satellite transmitters never face interruption.

The city also plans to redouble efforts to find affordable housing for the command’s troops, he said.

“It's one of the reasons that, when I was leading the Colorado Springs housing authority, we worked with Peterson Air Force Base to provide low-cost housing for enlisted personnel,” he said.

The two sides of the political spectrum in Colorado have joined forces in the battle for U.S. Space Command, says Democratic U.S. Sen. Michael Bennet.

“We have worked extremely well as a delegation in a bipartisan way with the governor to make sure this stays here,” Bennet said.

Bennet has worked in Washington to woo the Air Force, including repeated conversations with Air Force Secretary Barbara Barrett.

“Colorado Springs has incomparable intelligence and space infrastructure,” Bennet said. “It is the right ecosystem for critical military space assets.”

In the Senate since 2009, Bennet said he’s grown more aware of the important role military satellites play through his seat on the Senate’s Intelligence Committee.

“One of the reasons I joined the Intelligence Committee is the footprint we have around space in Colorado,” Bennet said. “That only makes me believe it is more imperative for this mission to stay in Colorado.”

As mayor of Colorado Springs, John Suthers says the city’s future is joined at the hip with the space industry and U.S. Space Command.

Suthers is coming off a string of wins for the local economy, from landing an Amazon distribution center to getting Southwest Airlines flights to touch down at the Colorado Springs Airport, across the runway from Peterson Air Force Base where the command is provisionally housed.

“We have always felt from an objective standpoint that we have everything Space Command needs,” he said.

In his second term atop Colorado Springs government, Suthers has watched the rapid emergence of the commercial space industry change the town he leads.

Space startups have flocked to the Pikes Peak region, nurtured by government contracts and the Catalyst Campus incubator that encourages new companies to take root here.

It’s the latest space race to hit the city, which has been home to companies aimed at orbit since the 1960s.

Suthers said his city makes the most sense on paper as the permanent home for the command, but he wants the Pentagon evaluators to go beyond spreadsheets.

Colorado Springs has housed the military since World War II, after the town’s leaders bought up ranches and gave them to the federal government to form Fort Carson.

Locals, he said, want the military in town because they believe in the mission and love the people who serve.

“I want them to feel the enthusiasm,” he said of the evaluation team.