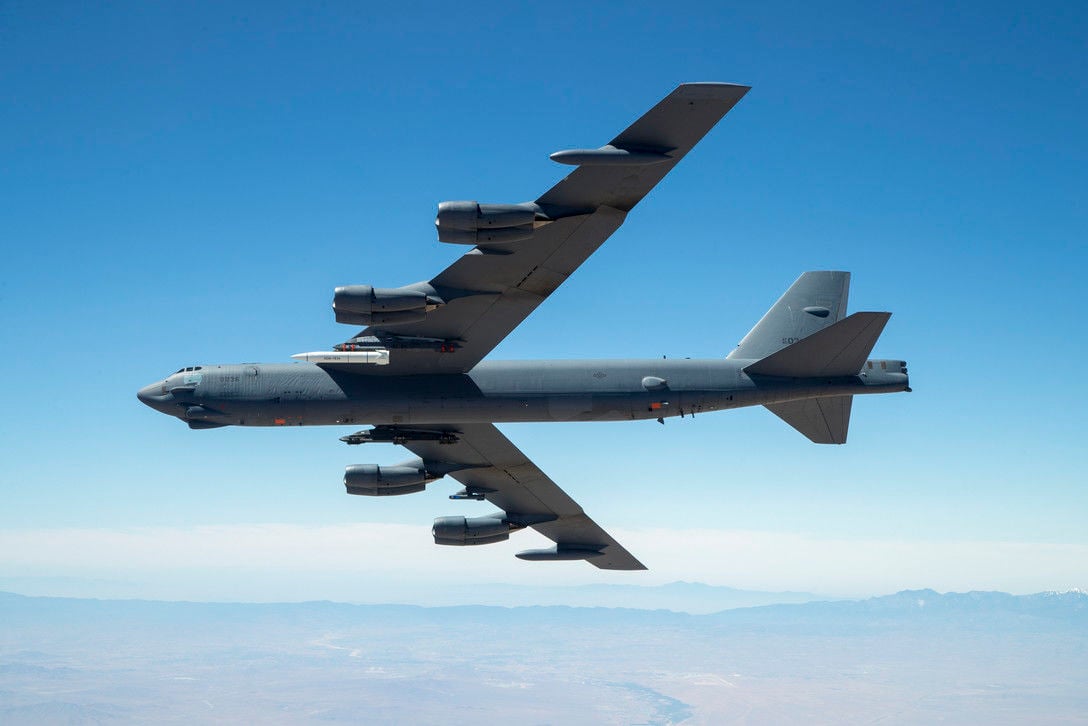 A B-52 carries the Air-launched Rapid Response Weapon for its first captive carry flight over Edwards Air Force Base in California last year. The missile is in testing, with what Defense Department officials have described as a successful test launch conducted in March.

A B-52 carries the Air-launched Rapid Response Weapon for its first captive carry flight over Edwards Air Force Base in California last year. The missile is in testing, with what Defense Department officials have described as a successful test launch conducted in March.

President Donald Trump’s favorite missile might not live up to all of his claims, but the “superduper” weapon could be fielded soon.

Trump has repeatedly brought up the weapon, including during a graduation speech at West Point this month.

“We are building new ships, bombers, jet fighters, and helicopters by the hundreds; new tanks, military satellites, rockets, and missiles; even a hypersonic missile that goes 17 times faster than the fastest missile currently available in the world and can hit a target 1,000 miles away within 14 inches from center point,” Trump said.

Trump appeared to be describing the Air-launched Rapid Response Weapon, a hypersonic missile that Lockheed is developing for the Air Force.

The missile is in testing, with what Defense Department officials have described as a successful test launch conducted in March.

It’s the type of thing that the Pentagon typically keeps quiet about. But with the president boasting about the missile since March, this is the military’s most famous secret program.

There’s good reason to talk up this missile. It puts America back in a game that China and Russia have been leading.

The Russian and Chinese missiles appear to be set for an anti-ship role.

Those nations have long feared America’s aircraft carriers and have nothing comparable in their fleets, so sinking flat-tops is a top priority for them.

The American weapon has a different role to play.

Since the early 2000s, the Air Force has sought a conventional weapon that could be delivered at the speed of an intercontinental ballistic missile.

Initially, military leaders mulled pulling nuclear warheads from missiles like the venerable Minuteman and replacing them with conventional warheads.

The problem is launching one of the weapons, with a heat bloom easily seen from space, could cause Russia or China to think America initiated a nuclear strike.

With the Minuteman idea shelved, the military looked to a hypersonic replacement for slow air-launched cruise missiles.

But is it 17 times faster than other missiles? Yes and no.

It isn’t faster than the fastest missile. ICBMs like the Minuteman have top speeds exceeding 15,000 mph, making the “superduper” missile look slow.

But the hypersonic missile is an important step. It would give America’s military the ability to strike targets quickly around the globe without having to resort to nuclear weapons.

Coronavirus has politicians struggling as campaigns stumble out of gate

Doug Lamborn couldn’t have been happier.