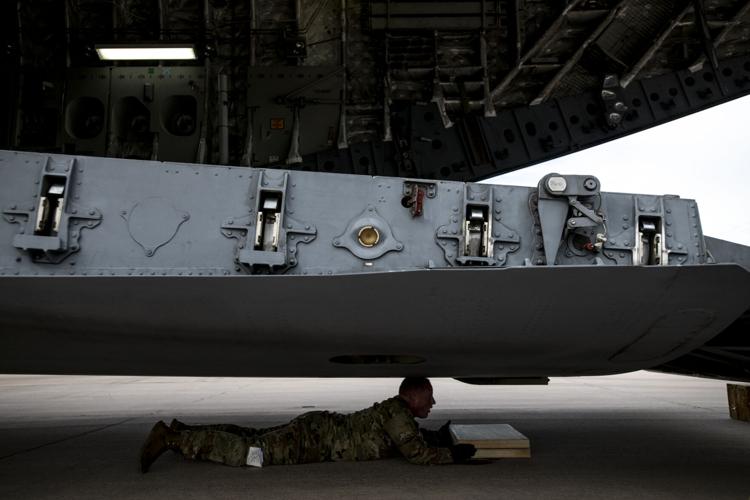 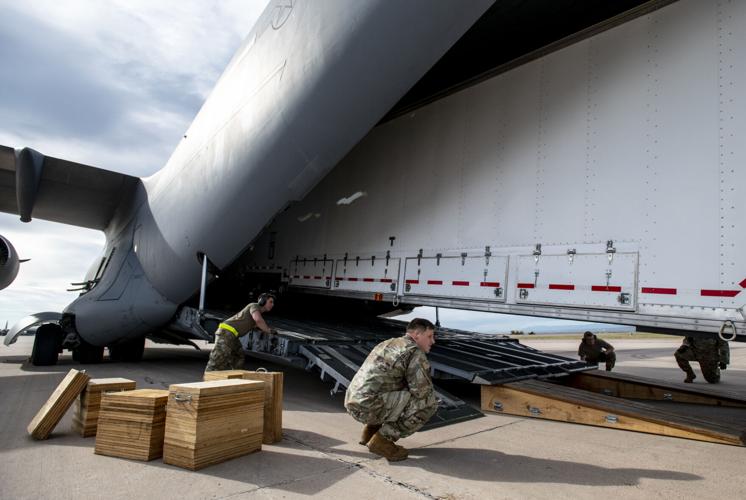 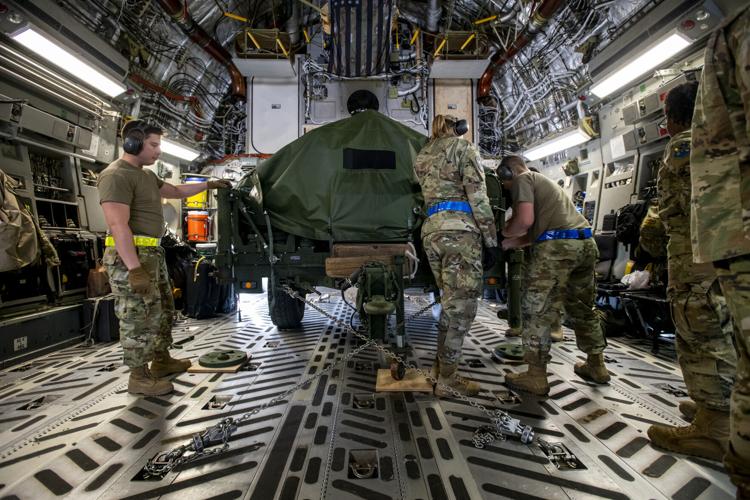 Air Force airmen and Space Force guardians secure an antenna inside of a C-17 during an exercise at Peterson Space Force Base on Wednesday. 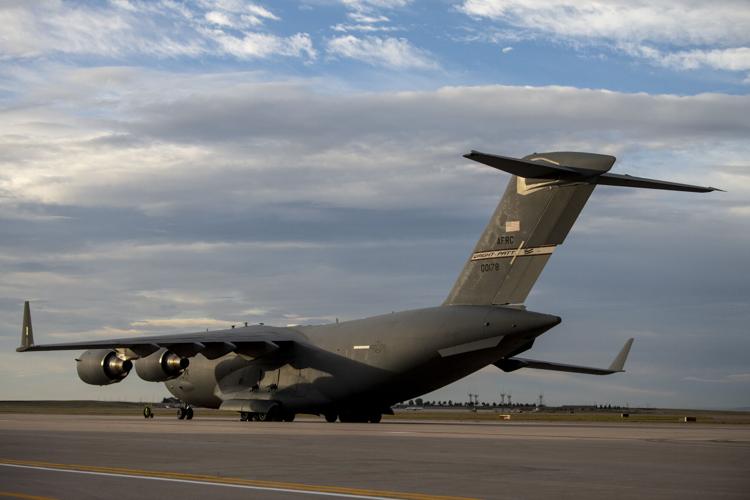 A C-17 at Peterson Space Force Base on Wednesday. 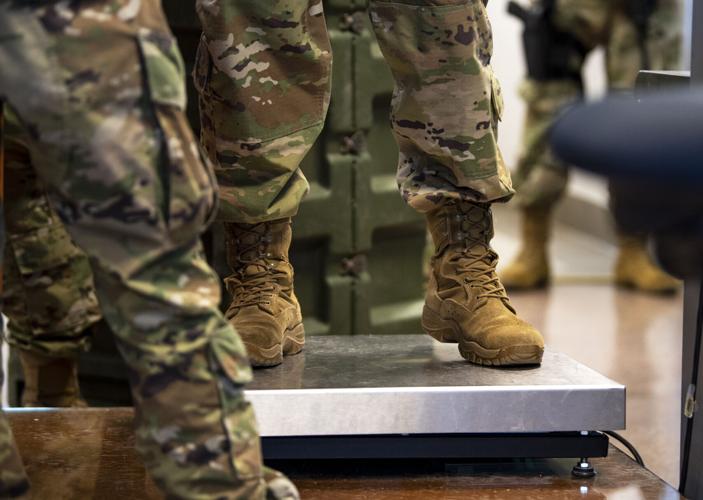 A Space Force guardian is weighed before deploying on a multiday operation that includes transporting a Mobile Constellation Control Station on a C-17. The unit is being transported to an operating location as part of the 4th Space Operations Squadron at Schriever Space Force Base’s multi-day operation to provide proof of concept for missions outside the U.S.

A Space Force guardian is weighed before deploying on a multiday operation that includes transporting a Mobile Constellation Control Station on a C-17. The unit is being transported to an operating location as part of the 4th Space Operations Squadron at Schriever Space Force Base’s multi-day operation to provide proof of concept for missions outside the U.S.

As the Wednesday morning sun rose over the tarmac at Peterson Space Force Base, just over a dozen airmen donning heavy-duty headphones bustled about the belly of a C-17 Globemaster III aircraft, preparing to load the airlifter with one of the nation’s most critical pieces of communication equipment.

A semitrailer bearing that asset — a Mobile Constellation Control Station — was dwarfed by the gray giant as it backed into the plane’s fuselage. Ground crews coaxed the truck back and forth, perfectly aligning the load until 3 mere inches remained between the plane’s interior and the truck.

The morning came as the first step of a dayslong airlift exercise for the U.S. Space Force 4th Space Operations Squadron, based at Schriever Space Force Base. Its 13 guardians assigned to the exercise have been tasked with operating, transporting and defending the MCCS, a hefty satellite command control center whose primary function is to “assure survivable and endurable communications for the president, secretary of defense and other strategic users throughout the spectrum of nuclear conflict,” the Space Force said.

The 4th SOPS is part of Space Delta 8, which operates the Space Force’s satellite communication systems that provide U.S. forces secure strategic communication globally in both peacetime and conflict.

Earlier in the morning, the 13 4th SOPS guardians turned in paperwork, had their temperature checked and stacked their baggage by the base’s brick passenger terminal in a sort of mini-deployment, simulating what could be a monthslong mission in the event of actual warfare, the mission commander said.

“We're wanting to demonstrate the airlifts so we can validate — for ourselves, for the Space Force and for the Joint Chiefs of Staff — that the 4th Space Operations Squadron is ready to respond to any eventuality, anywhere in the world, as conflicts potentially evolve and escalate anytime,” mission commander 1st Lt. Adam Morgan said.

The 4th SOPS, Morgan said, controls a certain “constellation” of powerful satellites, located across the globe, that can communicate with each other directly. They are operated by just two fixed communication centers — one at Schriever and another in California — to keep controls within American bounds, but this makes those stations “prime targets” for adversaries, Morgan said.

If one of these fixed centers were to be attacked, or if a satellite elsewhere in the world malfunctions, the MCCS can be transported quickly to assume control of the satellite system.

“That's where this asset … comes in,” Morgan said. “It is capable of loading on a C-5 or C-17 and deploying anywhere in the world on very short notice in order to get underneath that satellite … and potentially restore it and bring it back into the constellation.”

The plane, the MCCS and its guardians are set to fly to an undisclosed location stateside, where operators will practice controlling the satellite network as if they were “in an overseas environment” under threat of chemical attack or active warfare.

At an average of 24 to 26 years old, Morgan said, the 13 guardians are young, like the new military branch in which they serve. For many of them, this is their first duty assignment.

The exercise was supposed to begin Monday but was delayed until Tuesday, then to Wednesday, while waiting for the Globemaster, a military transport aircraft, to arrive in Colorado Springs. The plane was late — but for good reason.

“We flew the president's (motorcade) limos yesterday,” Capt. Matt Judd, one of the plane’s pilots, said. “We were supposed to be here yesterday, but we got rerouted because of that.”

The massive aircraft, he said, weighs in at 300,000 pounds but can take off with up to 585,000 pounds. The guardians, some strapped with rifles and handguns, filed into the plane’s interior, and the back door sealed the payload inside.

“Even though this is a really big airplane, it actually has the attitude of a small jet training aircraft,” Judd, of the 89th Airlift Squadron out of Ohio, said. “This airplane actually has a (control) stick, like it's a fighter jet. You forget you have 500,000 pounds behind you sometimes.”

Morgan said that while much of the Space Force’s operations are classified and located across the globe — or out of this world — he encourages transparency with the American public and wants them to know how its armed forces, and their equipment, are working behind the scenes to keep them safe.

“While the (MCCS) is a very protected asset and our adversaries know it exists and want to know where it’s at 24/7 — and we mask a lot of the details — we want the public to know that this is here,” he said.

The fitness center at Schriever Space Force Base will see a $30 million expansion in the coming years, as part of funding approved in the Nati…