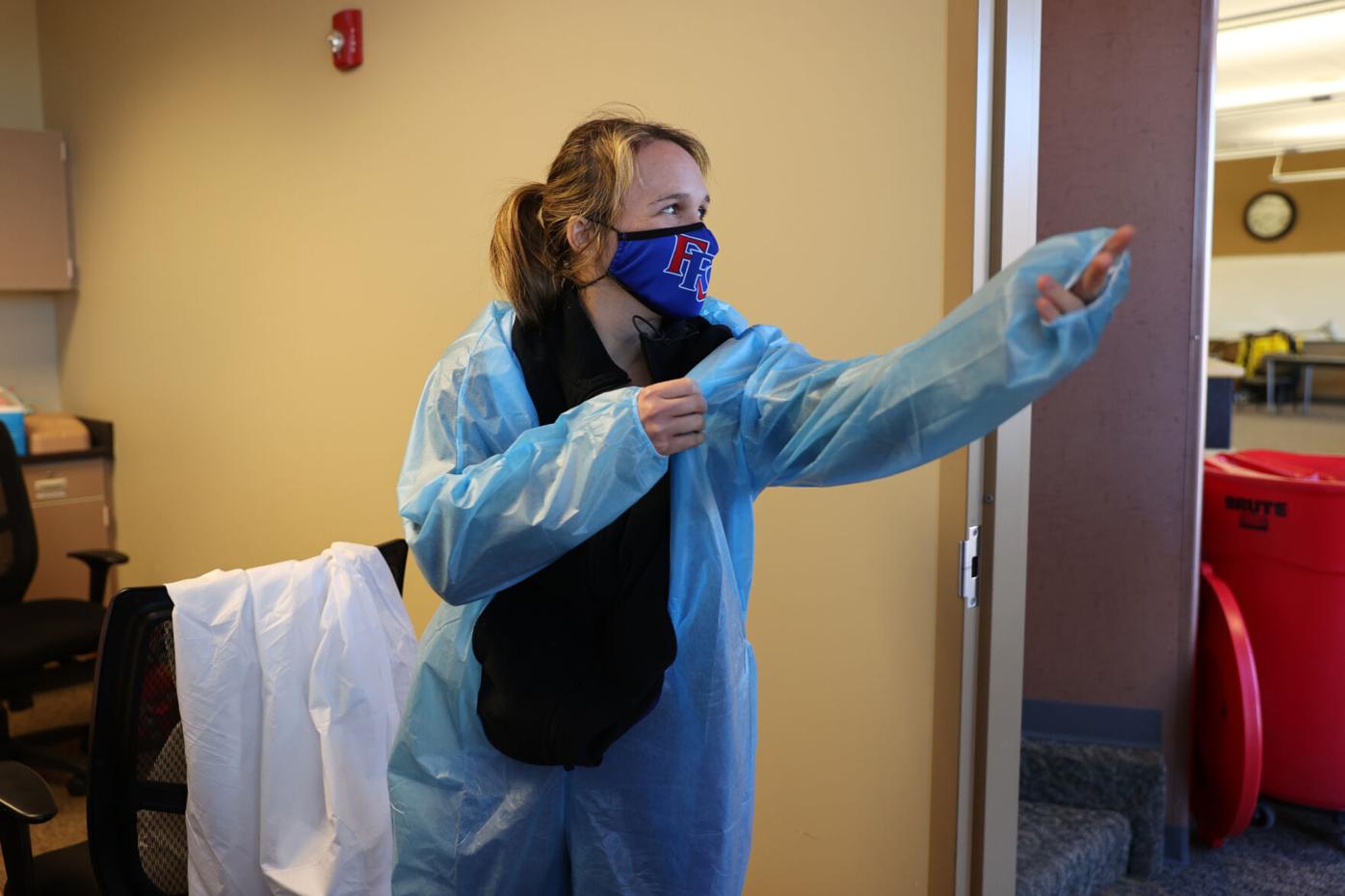 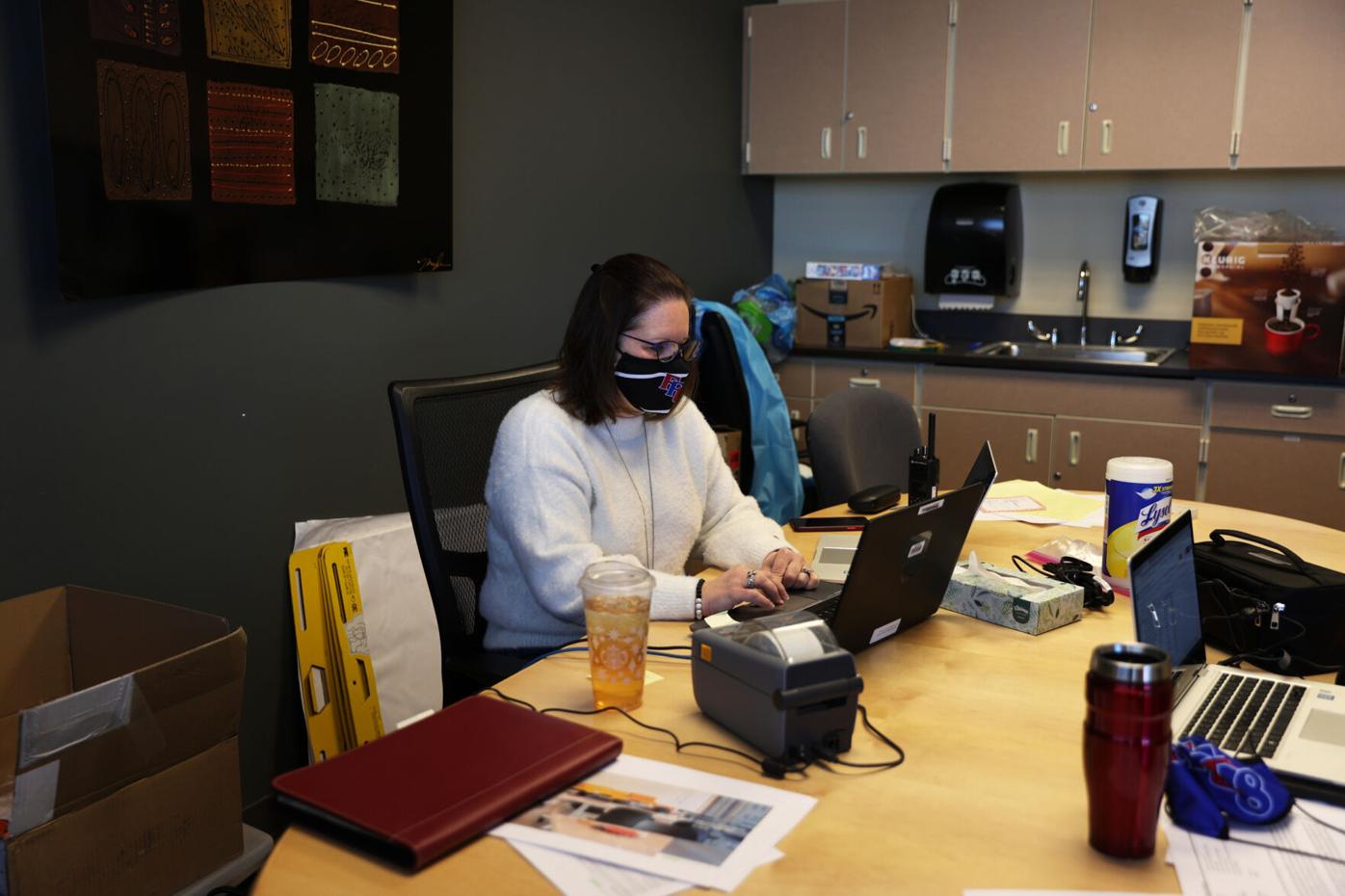 Fountain Fort Carson School District Deputy Superintendent Montina Romero combs through testing data on a laptop at Fountain Fort Carson High School in Fountain on Jan. 8, 2021. The high school is one of the district's testing locations, open to students and staff to get COVID tests. (Forrest Czarnecki/The Gazette) 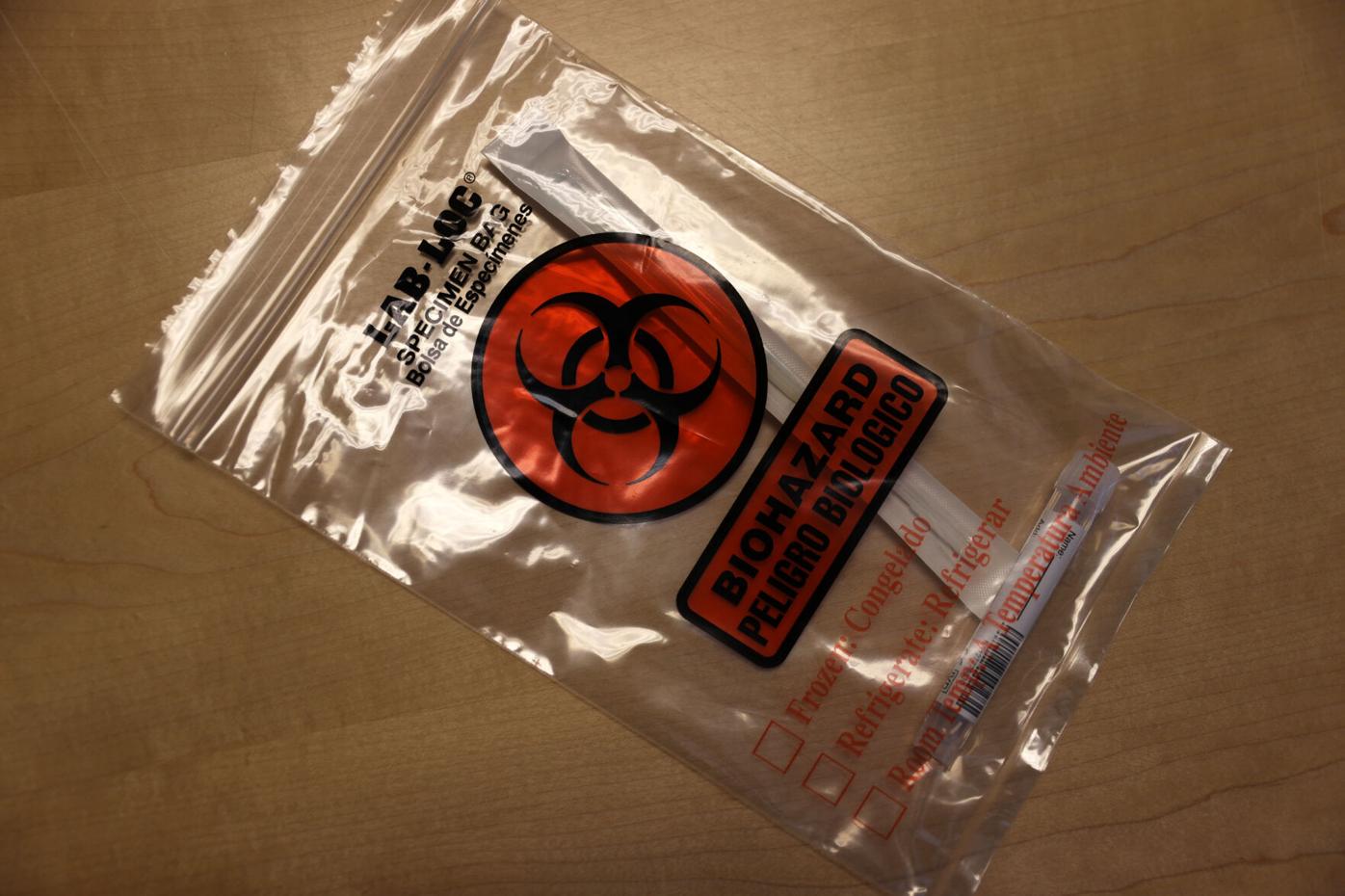 A COVID test kit sits on a desk in the testing headquarters room at Fountain Fort Carson High School in Fountain on Jan. 8, 2021. (Forrest Czarnecki/The Gazette) 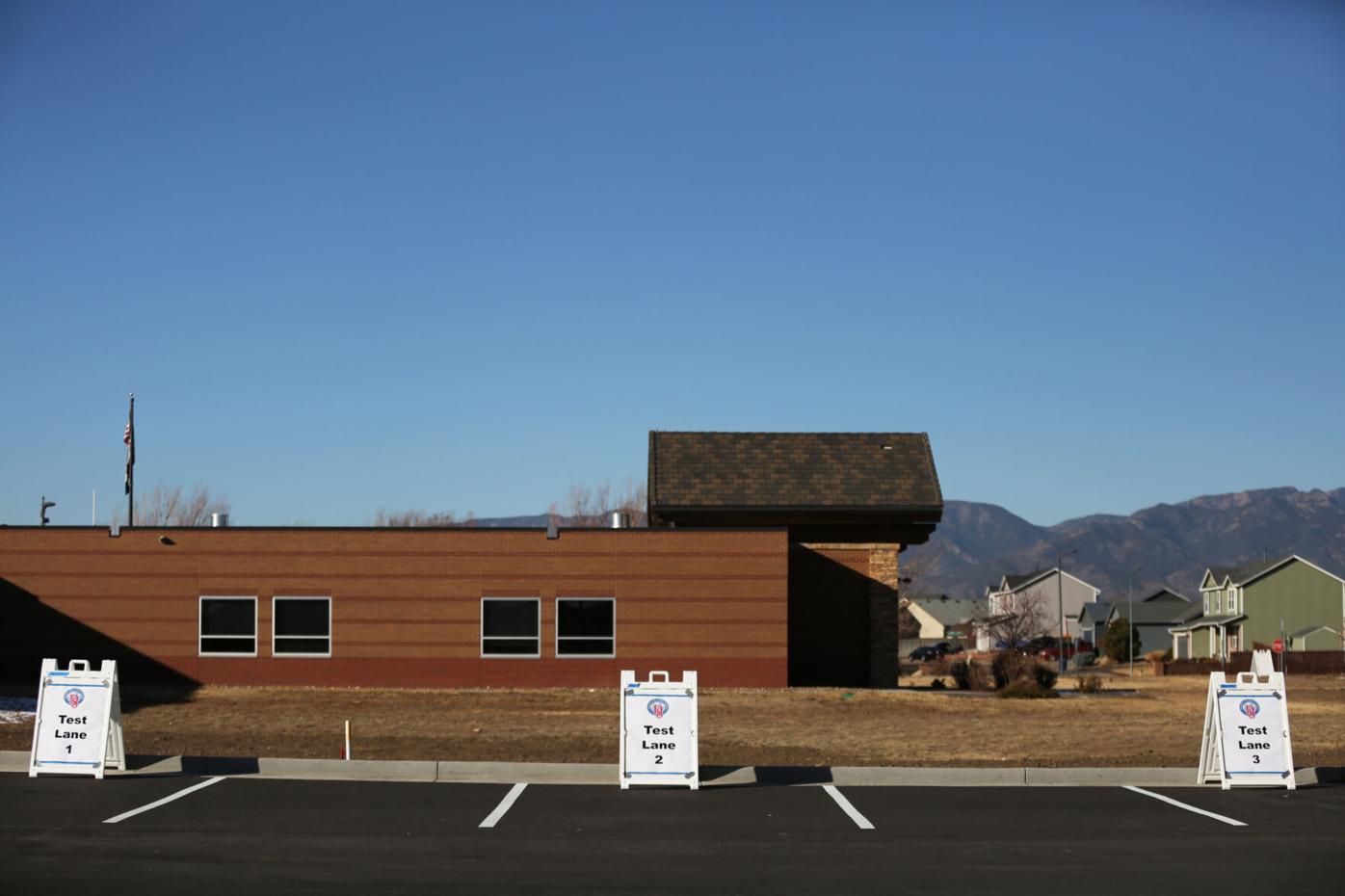 Fountain Fort Carson School District Deputy Superintendent Montina Romero combs through testing data on a laptop at Fountain Fort Carson High School in Fountain on Jan. 8, 2021. The high school is one of the district's testing locations, open to students and staff to get COVID tests. (Forrest Czarnecki/The Gazette)

A COVID test kit sits on a desk in the testing headquarters room at Fountain Fort Carson High School in Fountain on Jan. 8, 2021. (Forrest Czarnecki/The Gazette)

On-site COVID testing — touted by Gov. Jared Polis as a means to safely resume in-person learning — will soon be offered in schools that wish to opt in. For some Pikes Peak-area districts, it's already old hat.

Woodland Park School District RE-2 has been offering on-site testing since September; Fountain-Fort Carson School District 8 since late November. In both districts, school nurses collect samples, which are mailed overnight to a lab in Houston. Results are typically returned in 24-30 hours.

"From the beginning we've wanted to make sure we had as many resources as possible to help staff and families feel safe coming to school," said Montina Romero, Fountain-Fort Carson school district deputy superintendent. "Our school nursing team really had the attitude of 'whatever it takes.'"

The service is provided through COVIDCheck Colorado, which describes itself as a "social benefit enterprise" intended to help Coloradans "navigate the COVID-19 pandemic while keeping our economy and communities safe, accessible and open for all to enjoy."

Woodland Park offers the tests to staff only, while Fountain-Fort Carson offers it to any student, family or staff member. Representatives from both districts foresaw the benefits of such testing months ago.

"I didn't know what I was doing, I just called with kind of a desperate question," said Del Garrick, director of human resources for the Woodland Park district, who had heard school districts in the Denver metro had partnered with the organization.

Initially, the testing launched as a biweekly screening for staff, with school nurses rotating between district buildings administering the tests.

"Our school nurses volunteered to get involved," he said. "It's way out of typical school nurse duties, to put your life on the line like that."

Around October, illnesses began setting in — everything from allergies and the flu to COVID, Garrick said. The district then opened testing up to staff who were symptomatic or in quarantine, even if they had been recently tested.

So far, Woodland Park School District has sent off about 1,500 tests, Garrick said.

He credits testing as one of several factors that allowed the district to offer in-person learning "to at least some extent."

"We never went fully remote," he said. "It's certainly one of the mitigation strategies that really helped us."

At first, the school district paid COVIDCheck $10 per test, though grant funding received by the organization recently has meant the district doesn't owe a dime, he said.

"We really think it was a great investment, both for the physical well-being and screening, but also mental well-being," he said. "There's kind of a sense of security, one might argue ... something about knowing you're going to be able to check on your health every couple of weeks."

Woodland Park plans to continue to offer testing, Garrick said, though it may switch to oral swabs and also offer testing to symptomatic students. Each school now has two nurses offices: one for well individuals, and an isolation room, he added.

Fountain-Fort Carson offers the testing four days a week at four sites around the district: two on Fort Carson, and two in Fountain, offering options for those who can't or don't wish to drive to Colorado Springs.

"We just haven't put a lot of limits," Romero said. "We will test symptomatic or asymptomatic individuals.,"

The district has even offered testing "as an option for staff if they're planning to see a relative and they're concerned and want to make sure they're not infected."

Fountain-Fort Carson had so far run nearly 650 tests as of Friday, funded by grant money received by COVIDCheck Colorado. The district may also choose to offer at-home testing — via rapid-test kits that can be sent to schools or homes of students and staff, thanks to a partnership announced this week between the state of Colorado and BinaxNOW —  Romero said.

"We don't ask a lot of questions," she said. "We're really testing about anyone — student, staff or household member — who believes it's necessary."