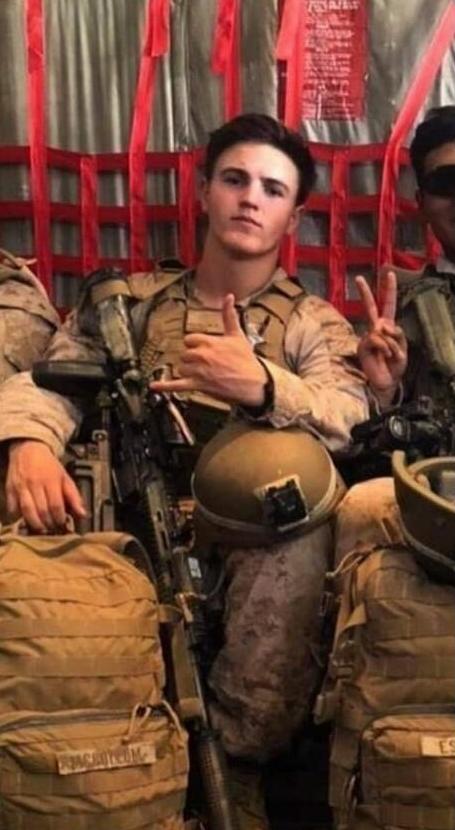 Lance Cpl. Rylee McCollum on his way to Afghanistan to help with the evacuation at the airport in Kabul. 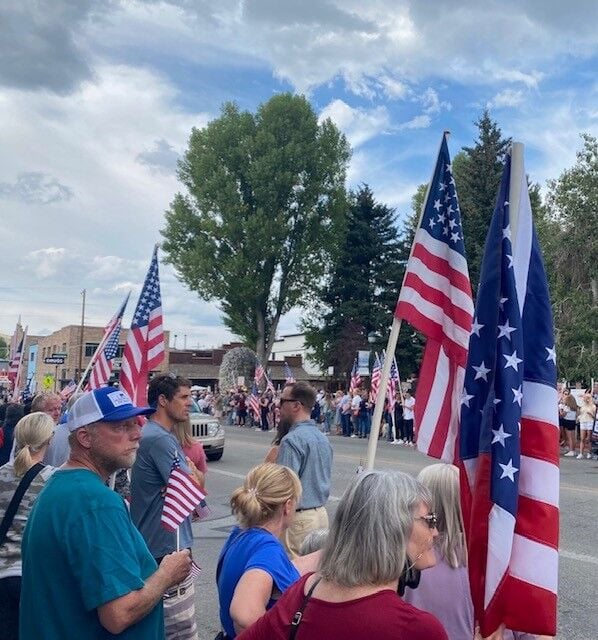 Thousands turn out to welcome Lance Cpl. Rylee McCollum home Friday to Jackson, Wyo. McCollum was killed with 12 other soldiers Aug. 26 at the airport in Kabul, Afghanistan.

Lance Cpl. Rylee McCollum on his way to Afghanistan to help with the evacuation at the airport in Kabul.

Thousands turn out to welcome Lance Cpl. Rylee McCollum home Friday to Jackson, Wyo. McCollum was killed with 12 other soldiers Aug. 26 at the airport in Kabul, Afghanistan.

Thousands of people lined the streets on Friday waving flags, cheering and wiping tears as a motorcade carrying Lance Corporal Rylee McCollum's remains made its way from Jackson Hole Airport through the winding mountain road into downtown Jackson, Wyoming.

McCollum's father, Jim, sisters Cheyenne and Roice and his pregnant wife, Gigi, were on the tarmac to see the casket arrive and be carried off of the plane by an honor guard of pallbearers from the Salt Lake City Inspector-Instructor Staff and Rifle Company F, 2nd Battalion.

"I caught myself smiling when Rylee was out of the plane and back in Wyoming. It is comforting to have him home," Jim McCollum told the Gazette.

Dignitaries including Wyoming Gov. Mark Gordon, U.S. Sens. John Barrasso and Cynthia Lummis, and U.S. Rep. Liz Cheney were on hand to honor McCollum, who was among those killed by a suicide bomber on August 26 at the Kabul airport.

Jim McCollum said he had heard from several of the Marines who were with Rylee in the minutes before he died.

"They told me Rylee didn't hesitate. They saw him pull at least 15 people to safety before he died ... just reached down and pulled them out. But that's who he was," said the elder McCollum.

Rylee McCollum, 20, graduated from high school in Jackson and was a champion wrestler from the age of 6 until he decided to join the Marines as a high school senior. Gigi McCollum is pregnant with their first child and due to give birth any day. The couple were married in Las Vegas last Spring just days before McCollum left with his unit for Jordan. McCollum and his unit got orders to help with the evacuations in Afghanistan three weeks before he was killed along with 12 other Marines.

Jim McCollum says he'll make sure that Rylee's child knows he was a hero.

"This is so humbling and overwhelming," he said.

Rylee's body was taken to a local funeral home to await a memorial service.

The 20th anniversary of Sept. 11, 2001, coincided with the end of the war that began as a result of the actions of the 19 al Qaeda terrorists, and the two have evoked an outpouring of emotions for veterans who served during the War in Afghanistan.