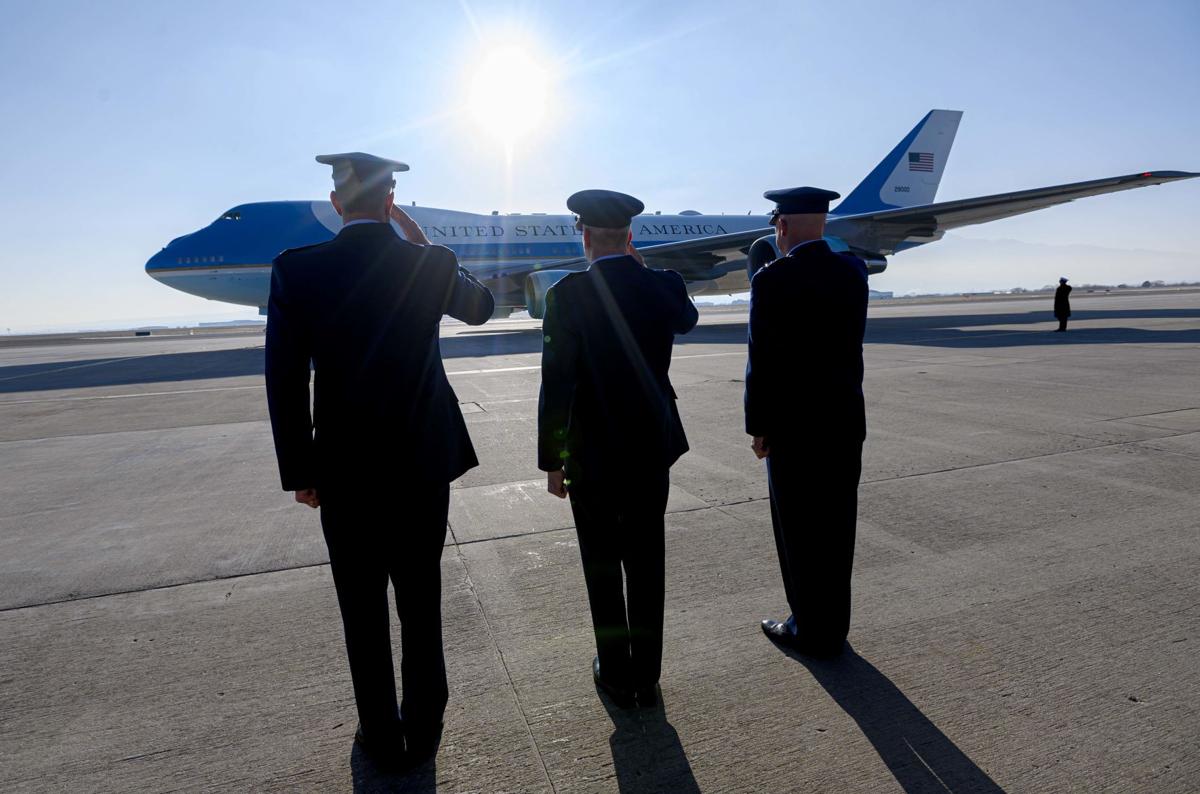 Air Force One with President Donald Trump on board arrives at Peterson Air Force Base Thursday, Feb. 20, 2020, in Colorado Springs, Colo. (The Gazette, Christian Murdock) 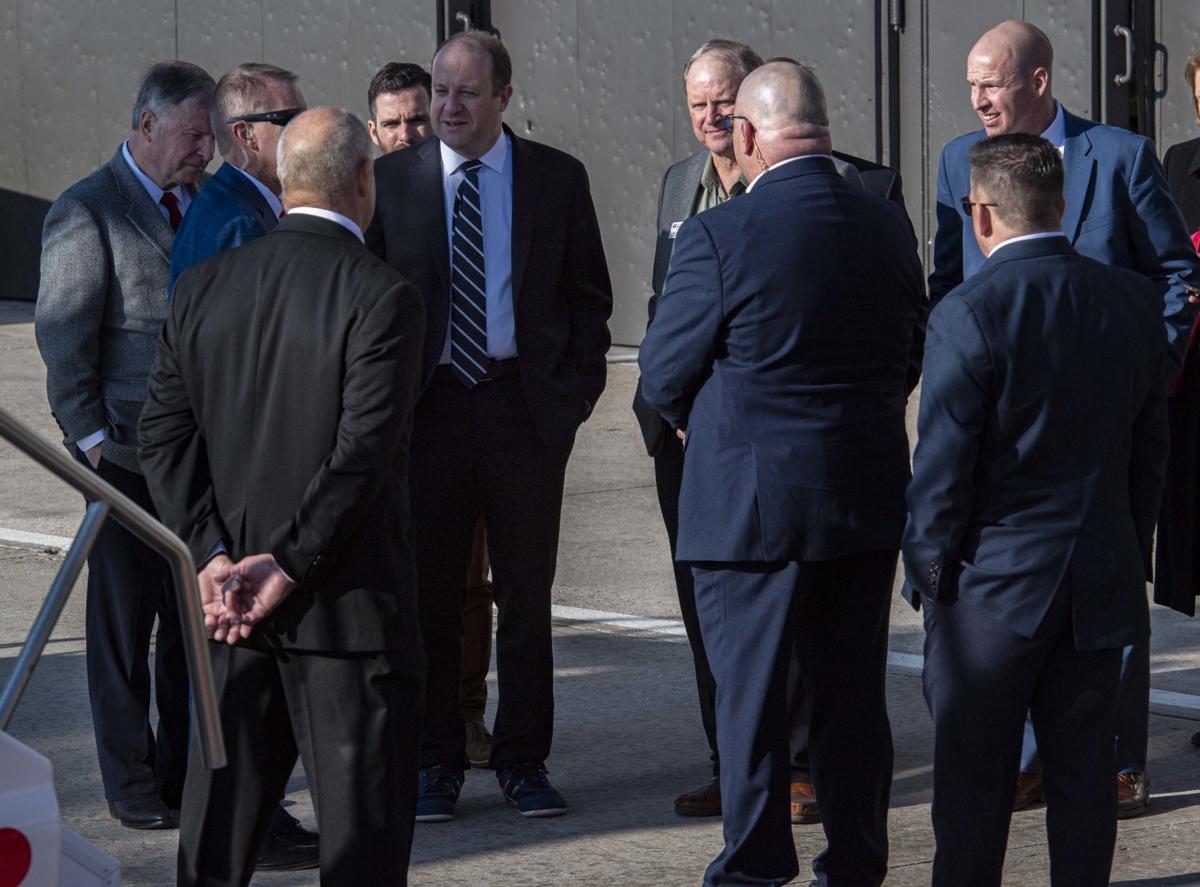 Colorado Gov. Jared Polis, in stripped tie, waits on the tarmac at Peterson Air Force Base to talk to President Donald Trump after he arrived in Air Force One Thursday, Feb. 20, 2020. (The Gazette, Christian Murdock) 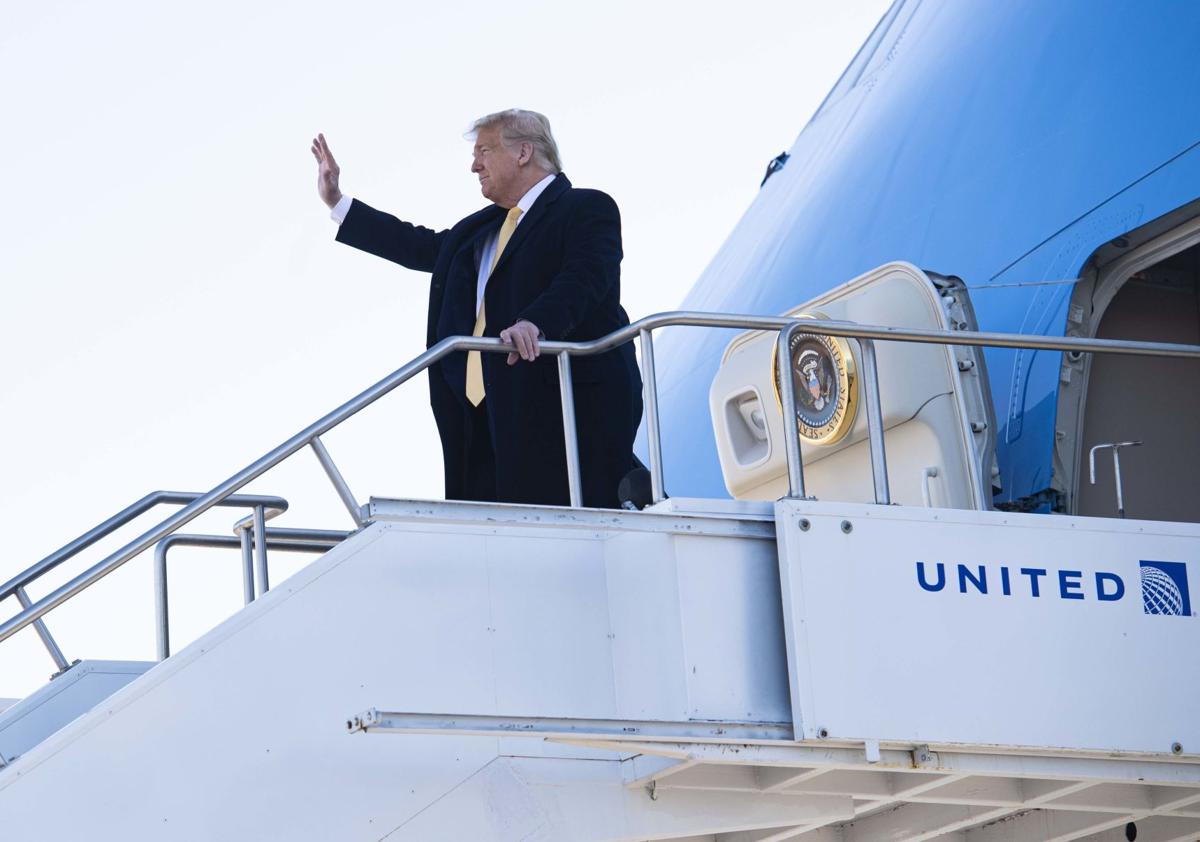 President Donald Trump waves to the crowd at Peterson Air Force Base as he exits Air Force One last week during his visit to Colorado Springs. 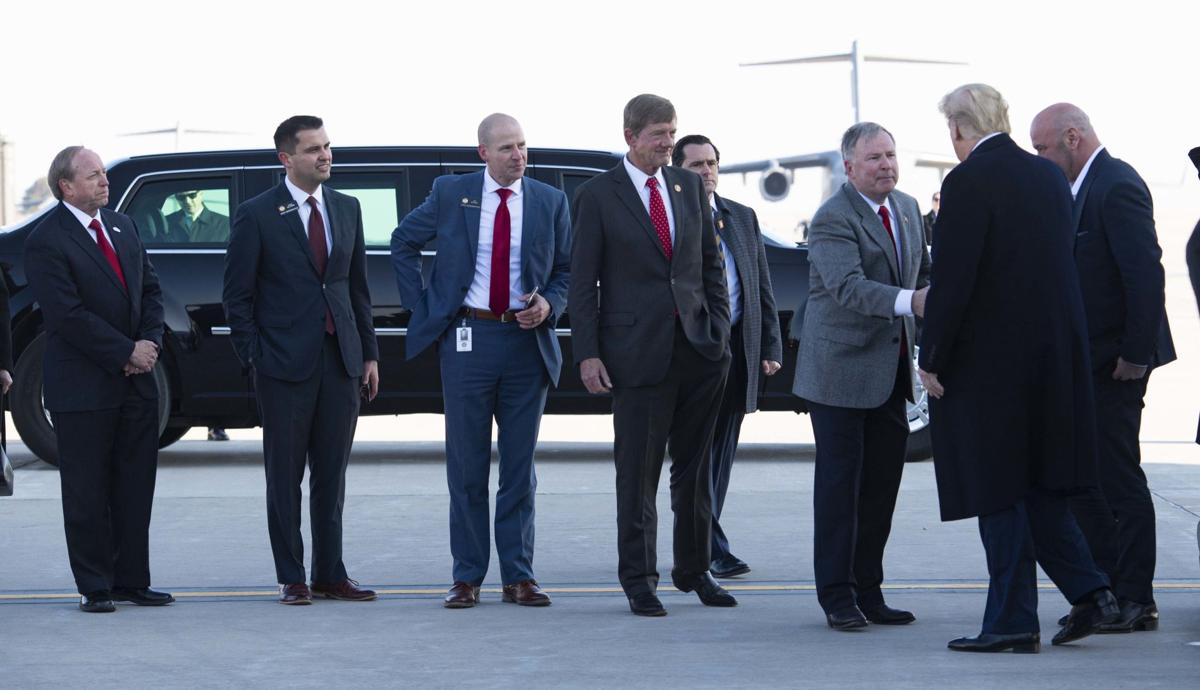 Air Force One with President Donald Trump on board arrives at Peterson Air Force Base Thursday, Feb. 20, 2020, in Colorado Springs, Colo. (The Gazette, Christian Murdock)

Colorado Gov. Jared Polis, in stripped tie, waits on the tarmac at Peterson Air Force Base to talk to President Donald Trump after he arrived in Air Force One Thursday, Feb. 20, 2020. (The Gazette, Christian Murdock)

President Donald Trump waves to the crowd at Peterson Air Force Base as he exits Air Force One last week during his visit to Colorado Springs.

Amid a 98-minute speech in Colorado Springs on Thursday, President Donald Trump threw more confusion into the long-overdue decision of where the military will house U.S. Space Command. And he did it with the shortest pronoun in the English language.

With that word, Trump told the public that the basing decision has moved from Pentagon committees to his desk. It’s a rare move and one most presidents have avoided, instead relying on Pentagon leaders to make basing decisions in an ostensibly nonpartisan process.

“I will be making a decision by the end of the year,” Trump said.

The decision has great weight in Colorado Springs, temporary home for the command, which oversees military efforts in orbit. Gov. Jared Polis jumped on Air Force One after it landed in Colorado Springs to twist Trump’s arm on the matter, and other Colorado leaders, from Mayor John Suthers to Republican U.S. Rep. Doug Lamborn, have joined the push.

The Air Force announced Colorado Springs as the command’s temporary home more than a year ago and pledged to have a final decision by May or June.

The Pikes Peak region emerged as a top choice for the command, because most of the military’s space infrastructure and more than half of the troops for the newly created Space Force are here. The other rivals for the command, Alabama and Florida, though, have kicked off huge lobbying campaigns to wrest the command away from Colorado Springs.

But as summer turned to fall, it became apparent that something weirder was going on.

The Pentagon was silent on the delay, and Space Command and the Space Force have been dodging press questions for months.

Rumors started among Colorado’s congressional delegation that politics were behind the issue.

Lawmakers have long pressured the Pentagon for preferential treatment. So, it’s no surprise that Alabama, with Republican U.S. Sen. Richard Shelby, who heads that chamber’s Appropriations Committee, has worked to muscle the command to Huntsville.

Instead, what’s surprising is that Trump essentially declared that the command’s basing decision will be handled by a politician rather than bureaucrats.

Past presidents have stayed away from that route for the same reason they avoid the Playboy mansion: It’s going to make a lot of people unhappy.

If Trump gives the command to Florida, which was initially dropped as a finalist by the Pentagon, the politicians in the losing states will have grounds to declare it a crass political move to gain votes and favor in the president’s home state.

And by delaying the decision, which under Trump’s timeline could come after November’s election, the president is impacting the lives of families in the Pikes Peak region. If the command stays here, military families and thousands of military contractor employees can comfortably put down roots.

But they’re not going to buy houses, and they’ll struggle to connect with Colorado Springs as long as the specter of an upcoming move looms. It hurts troop morale and the command’s effectiveness, and it deeply hurts families.

The last president who made decisions on bases in the Oval Office was Lyndon Johnson. Johnson gained friends by rewarding some states with troops but was reviled elsewhere for closing bases.

One particular decision cost Johnson and his Democratic Party dearly, and it happened in what was then a Democratic stronghold: Alabama. Johnson closed Brookley Air Force Base, a massive complex near Mobile, in a move that rewarded more troops to his home state of Texas.

And after Johnson dropped out of the 1968 race, Democratic nominee Hubert Humphrey was spurned by Alabama voters, who instead went for Dixiecrat George Wallace.

After the Johnson era, presidents shied away from basing calls. The nonpartisan Base Realignment and Closure Commission was established to give the commander in chief political cover when the Pentagon downsized.

And rewarding more troops to bases has been handled in the Pentagon, where announcements are accompanied by charts and graphs from bureaucrats and staff officers to explain why they did what they did.

Does Trump have the right to pick the new home for U.S. Space Command? Absolutely.

Will he now face political consequences for that action? Without question.

U.S. Space Command could spend another 10 months in limbo after President Donald Trump spurned a full-press lobbying effort from Colorado and …