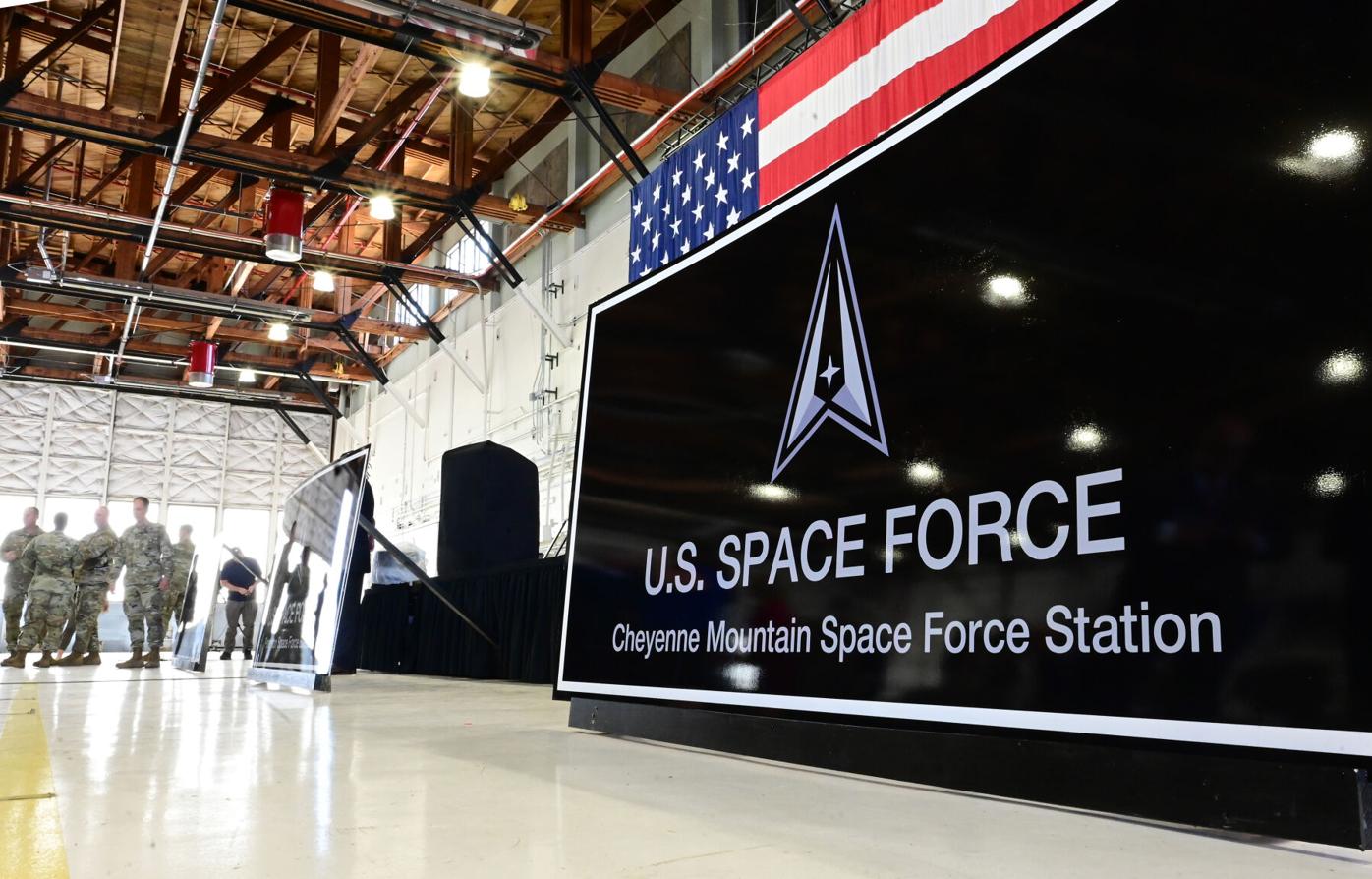 Three local military bases have changed their names to omit the word “Air” and add the word “Space.” A ceremony was held at Peterson Space Force Base name change as well as for Schriever Space Force Base, and Cheyenne Mountain Space Force on Monday, July 26, 2021. (Photo by Jerilee Bennett, The Gazette) 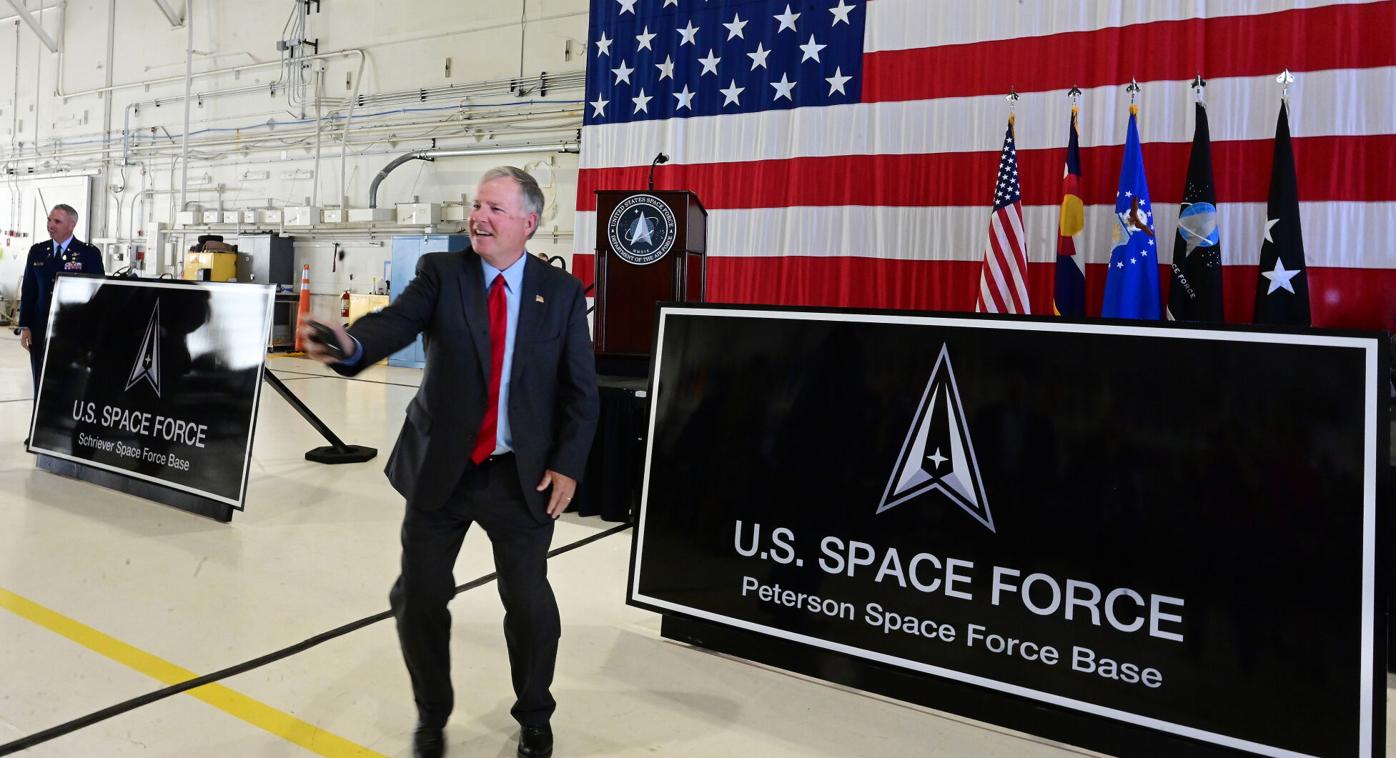 Republican U.S. Rep. Doug Lamborn takes selfies in front of a sign with the new name for Peterson Air Force Base.

A ceremony was held Monday at what is now Peterson Space Force Base to recognize the name change, as well as the changes to the names of Schriever and Cheyenne Mountain. 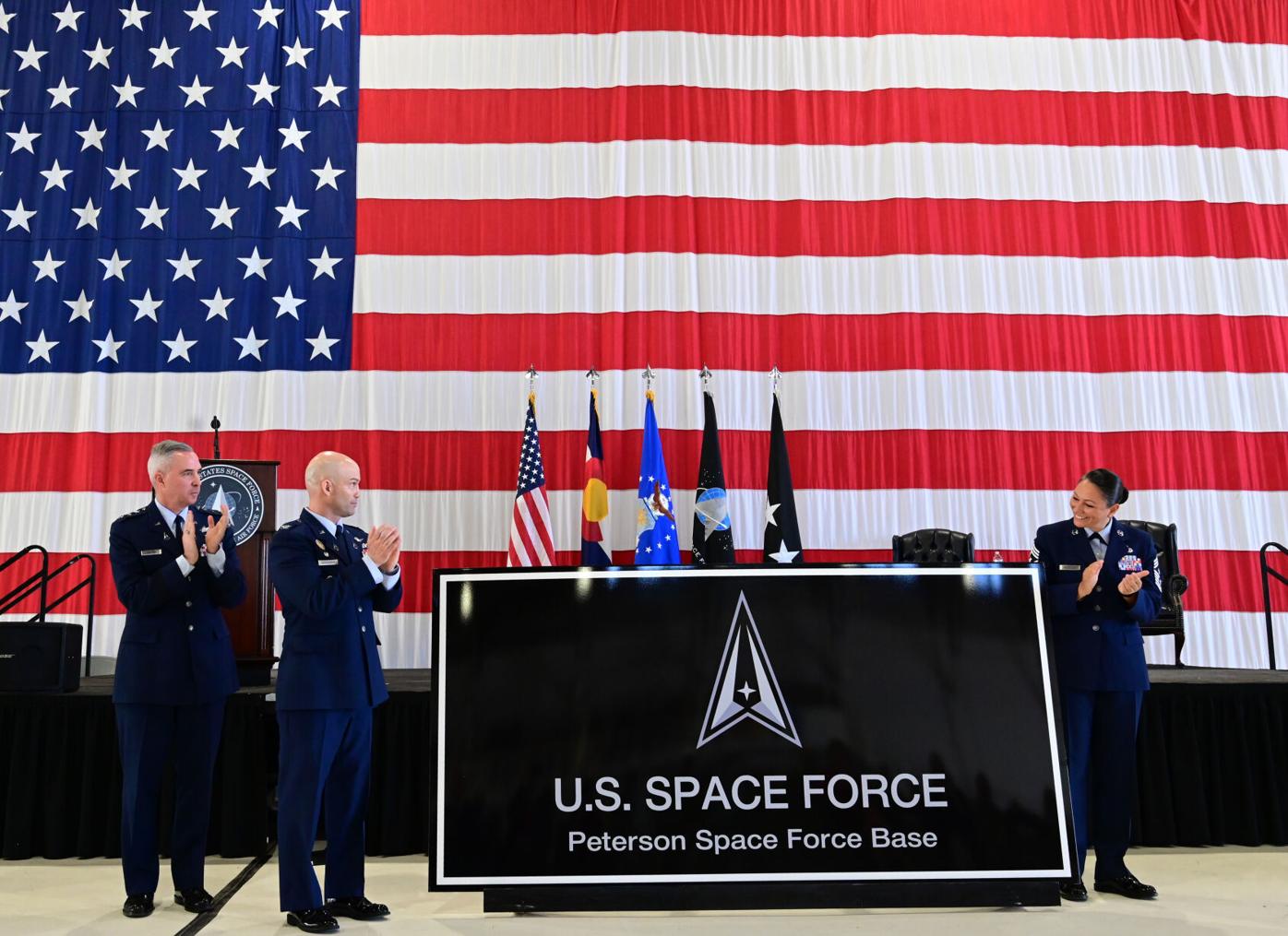 Three local military bases have changed their names to omit the word “Air” and add the word “Space.” A ceremony was held at Peterson Space Force Base name change as well as for Schriever Space Force Base, and Cheyenne Mountain Space Force on Monday, July 26, 2021. (Photo by Jerilee Bennett, The Gazette)

Colorado now has the largest contingent of military installations named for the new space service branch after a renaming ceremony Monday at Peterson Space Force Base.

“Those of us who are guardians and the airmen assigned to U.S. Space Force are fortunate to be living through this historic moment in our nation’s history, when we … grow, mold and shape the Space Force,” said Lt. Gen. Stephen Whiting, commander of Space Operations Command at Peterson Space Force Base. “We are a new service for a new era, and I can’t wait to see what the next several decades bring for our service and our nation in space.”

Space Force is the sixth and newest branch of the Armed Forces. It was established in December 2019.

It's the third name change for Peterson, which has been known as Peterson Field and Colorado Springs Army Air Base. It's the second new name for Schriever, which began as Falcon Air Force Base before getting named for Gen. Bernard Schriever, father of military space.

Colorado Springs Republican U.S. Rep. Doug Lamborn said he missed votes Monday in Washington D.C. to attend the “once in a lifetime event."

“It is a big day for Colorado Springs … for our national defense and for Space Force. When word gets out on what has happened here today, people from all over the country will realize that this is where Space Force is concentrated.”

Colorado has the largest contingent of bases named for the new space service. It is also home to Buckley Space Force Base in Aurora, Space Operations Command and the bulk of the Space Force's 13,000 troops.

Colorado Springs is the provisional home of U.S. Space Command — which oversees all military missions in orbit — through 2026. Former President Donald Trump announced in January that U.S. Space Command would be uprooted and moved to Huntsville, Ala., after 2026. But the federal Government Accountability Office and the Pentagon's Inspector General are reviewing the decision and Congress could reverse it.

“We still have the same high level of responsibility now, but to get the name caught up to the direction the Space Force is going is incredibly important. It represents all the hard work that America's sons and daughters are doing 24 hours a day, seven days week.”

“It establishes a culture and our own individual part of the Space Force,” Rockwell said.

Space Delta 6 is responsible for cyberspace operations and for assuring space access through a $6.8 billion satellite control network.

Peterson traces its origins back to World War II and May 1942, when Colorado Springs Army Air Base (Peterson) was established as an air support base, for, then, Camp Carson.

The base was renamed Peterson Army Air Base in his honor a few months following his death.

Schriever began in September 1979 when officials approved plans for the development of an installation to house an operations support center for NASA's space shuttle and backup control for satellite missions.

In 1998, the base was renamed in honor of Gen. Bernard Adolph Schriever, marking the first time an Air Force installation was renamed to honor a living individual.

Construction at Cheyenne Mountain began May 18, 1961, and it was fully operational in 1966. Its origins date back to 1956, when a commander suggested building an underground fortress to protect against vulnerable targets at the former Ent Air Force Base. Russians had proved their ability to launch nuclear weapons by launching Sputnik I.

A driver crashed through a planter and dented a gate in downtown Colorado Springs Tuesday afternoon, police said.