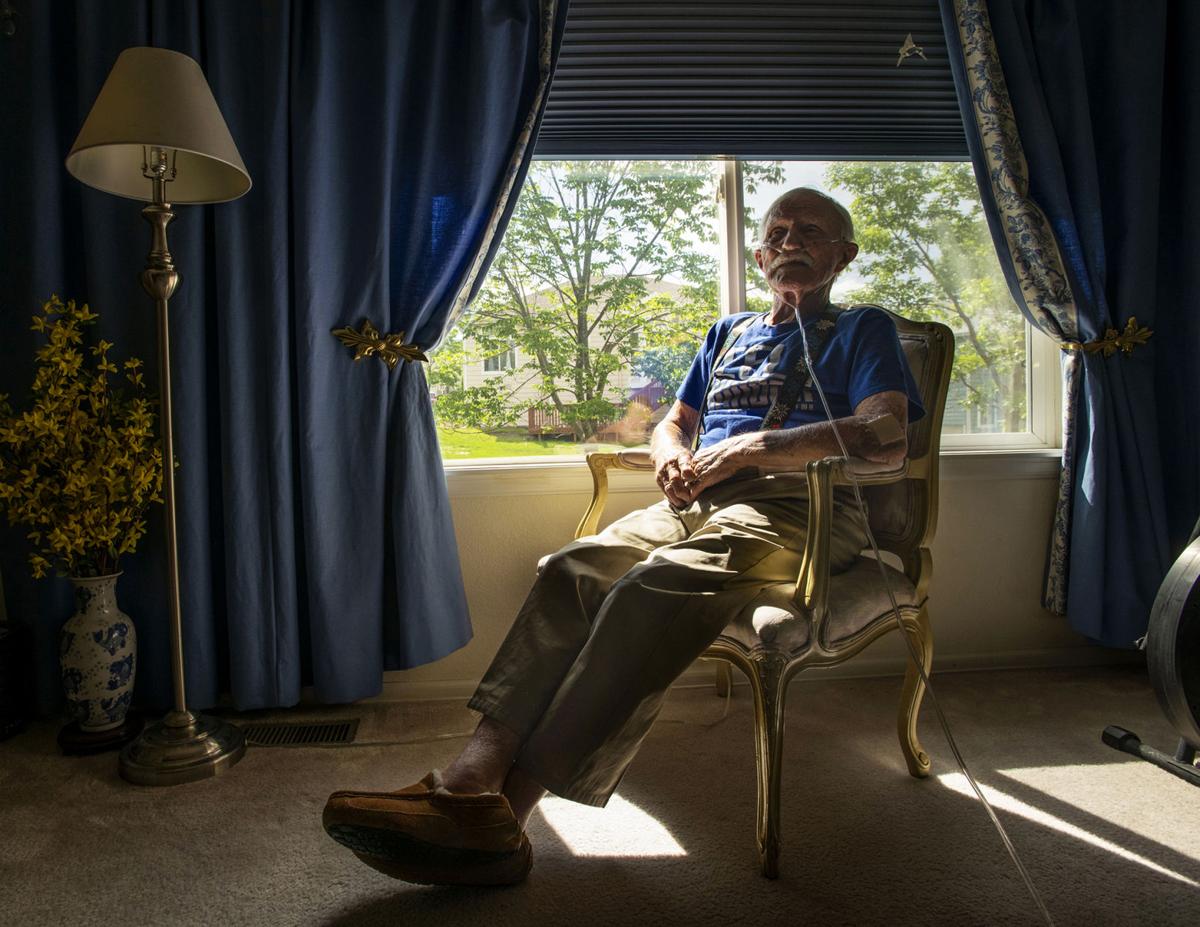 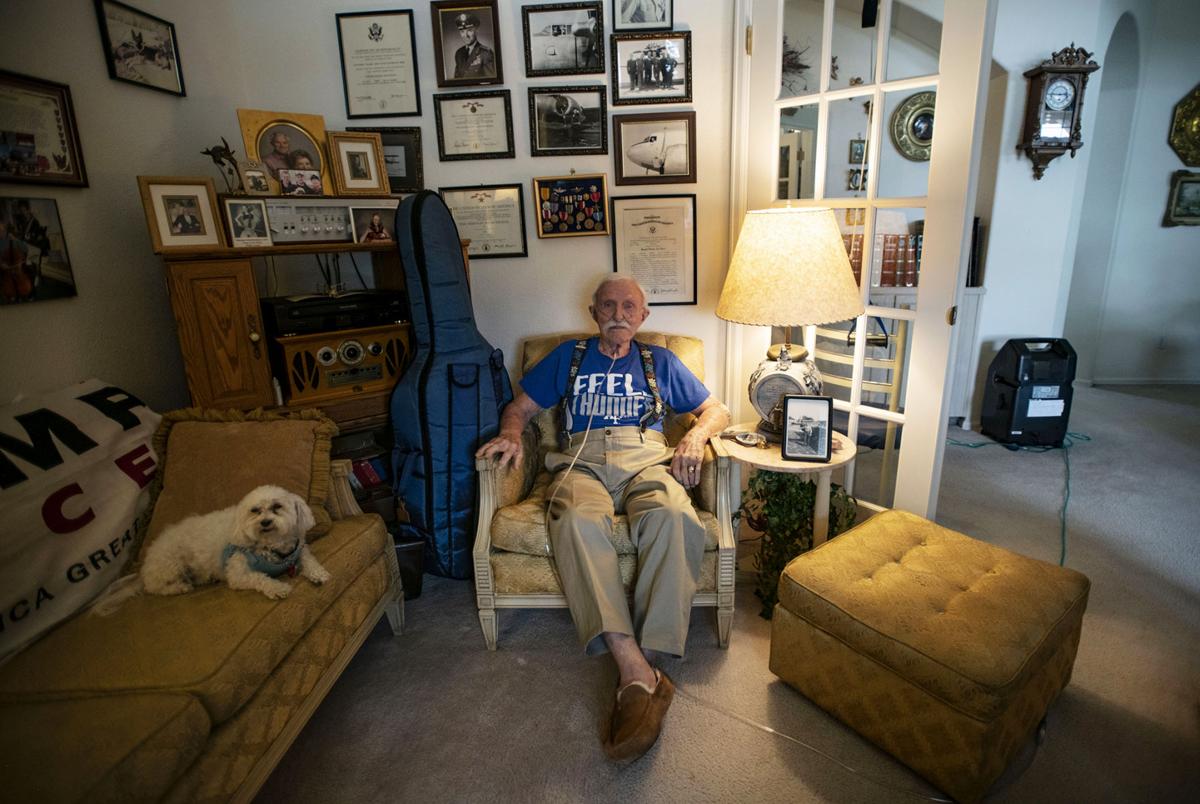 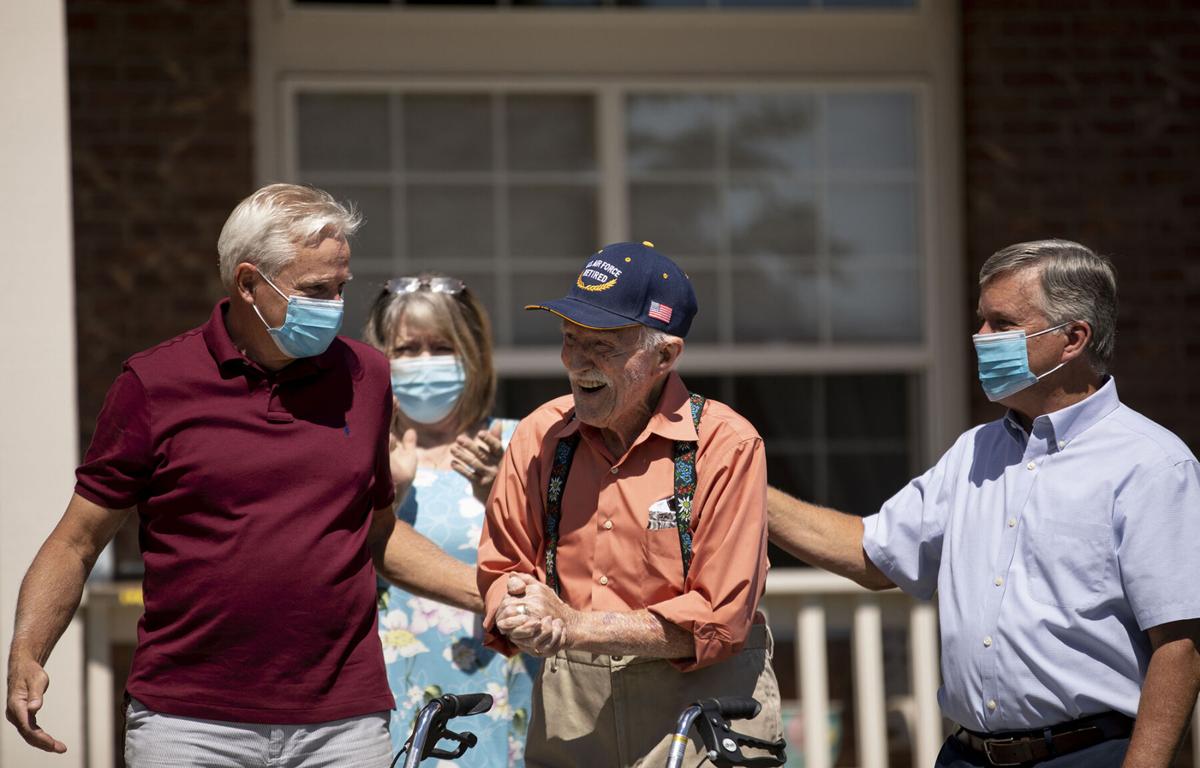 Retired Air Force Lt. Col. Egon Schottleutner gets a surprise visit from the Air Force Academy's Academy Winds band in celebration of his 100th birthday outside his home in Colorado Springs, Colo., on Wednesday, June 3, 2020. The six person band performed Happy Birthday and other military songs. (Chancey Bush/ The Gazette)

Retired Air Force Lt. Col. Egon Schottleutner gets a surprise visit from the Air Force Academy's Academy Winds band in celebration of his 100th birthday outside his home in Colorado Springs, Colo., on Wednesday, June 3, 2020. The six person band performed Happy Birthday and other military songs. (Chancey Bush/ The Gazette)

Things could have gone either way for Egon Schottleutner.

The blonde-haired, blue-eyed combat pilot who would later earn a Bronze Star was born in Germany in 1920, just a little over a decade before the Nazis would assume power.

The 100-year-old recalls tales of a sunny afternoon in Hamburg, where he was born, when his family exiting a theater.

Then, the shooting started.

His father leaned over to his mother and said, “I’m going to America,” he recounted.

“He wanted to get out of Germany because Nazi socialism was so strong,” Schottleutner said, recalling the movement that Adolf Hitler assumed leadership of in 1921.

“They were shooting people in the streets. It was that bad.

“That was the turning point in my life. If he hadn’t made that decision, no telling how I would have ended up.”

His family sailed to America on the Andania, a British passenger liner, arriving in Ellis Island in 1923 and living with a sponsor family.

In 1939, at the age of 19, he joined the Colorado Air National Guard out of Aurora, where he had been working as a brick layer at what would become the Veterans Affairs hospital in Aurora.

It was the beginning of a storied military career that would span two service branches, the Army Air Corps and the Air Force; three wars; three decades; and multiple jobs — including mechanic, pilot and linguist.

“I had a strange tour,” said Schottleutner, who turned 100 this month. “I had six serial numbers. Most have one.”

The memories that stand out the most to Schottleutner are perhaps the more mundane, from making airborne drops of his dirty clothes at a laundry facility, to aiding in the reconstruction of runways in occupied Germany.

“That was a high time for me,” he said. “I was talking to German admirals, big-time Nazis.”

During World War II his knowledge of German landed him a job as a linguist, which put him in a position to receive a two-day gallery pass to the Nuremburg trials. His bilingual status would also afford him the opportunity to do “spooky work” in multiple wars, including World War II and Vietnam.

“In South Vietnam, customs never heard of me, but I covertly crisscrossed their country for one year on the ground and in the air while clandestinely collecting air intelligence information against North Korea and Vietnam,” he recalled.

But no job could usurp his affinity of being a pilot. His love affair with planes began with a civilian pilot’s license. His time in the military repairing B-17s inspired him to take the written exam for pilot training, which he passed.

When it came to civilian license, “I soloed in eight hours,” he recalled. “So why couldn’t I pilot the Flying Fortress?”

“There ain’t nothin’ like it,” he said of flying. “I could hardly wait to get my hands on an airplane. Any time there was an airplane loose, I had it. I took off.”

When retired Air Force Lt. Col. Egon Schottleutner walked outside his Colorado Springs home June 3, leaning on his red walker, he had no idea what was in store for him.