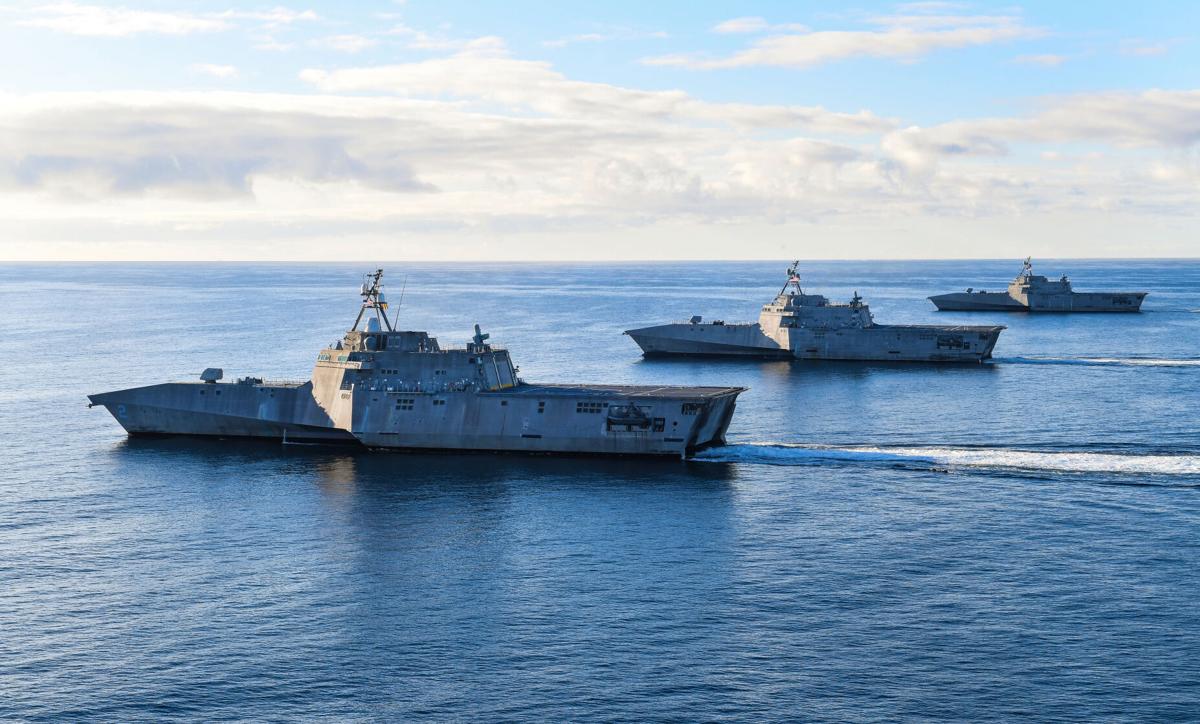 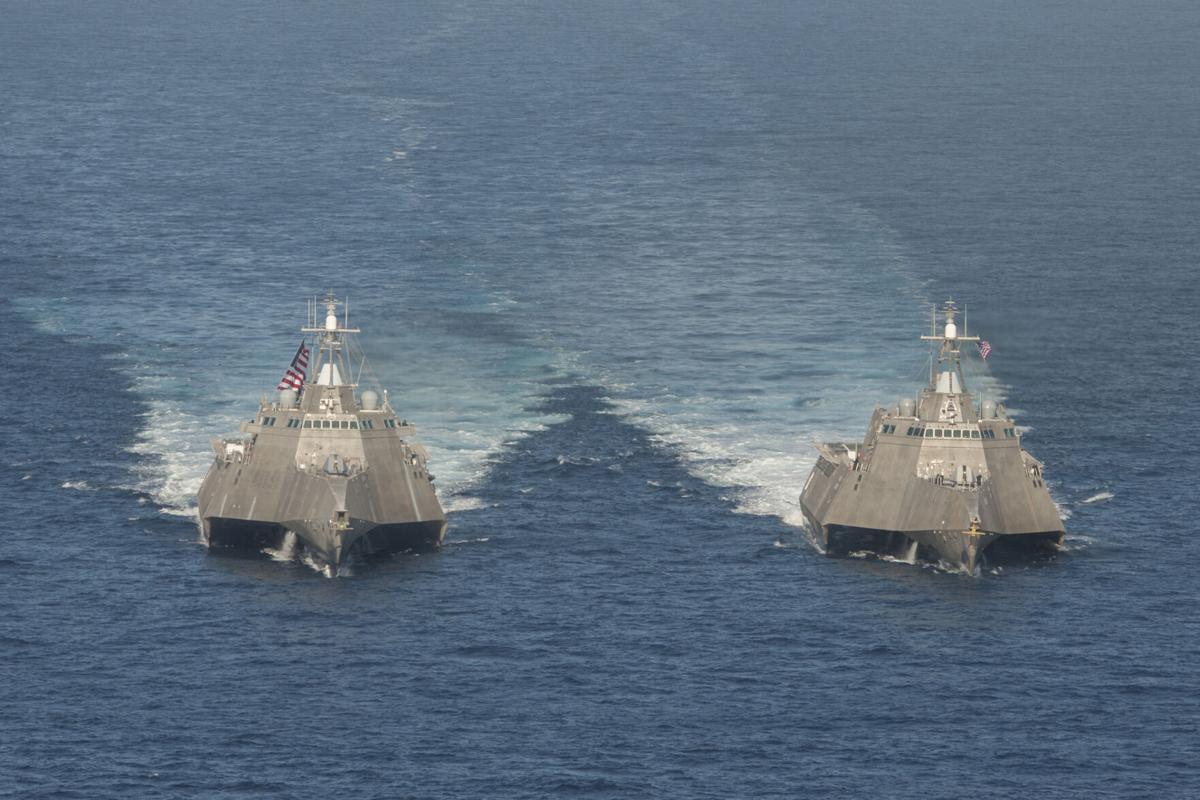 SAN DIEGO • Almost 15 years ago, the Navy christened the first of a new class of warship designed to fight the Global War on Terrorism. The so-called littoral combat ships would be fast and agile, operating close to shore against missile-firing boats and small submarines.

Today, the Navy has a new mission — or rather, has returned to its old mission, facing off against more capable warships deployed by China and Russia. And the service is still trying to figure out what to do with its $16 billion LCS fleet.

It doesn’t help that some of the ships have suffered embarrassing breakdowns in mid-ocean. Or that the Navy discovered recently that the transmission in one of the two classes of ships was defective and needed to be redesigned. And while Congress has eagerly funded construction of the two very different classes of ships, it cut funding from the mission modules needed by the ships to fulfill their missions.

That unfortunate combination explains the ignominious nickname assigned to the LCS by some sailors: Little Crappy Ships.

The Navy intends to spend an additional $61 billion to maintain and operate the ships, according to the Government Accountability Office. But at the same time, the service announced plans last year to retire four of the earliest ships beginning this summer, well ahead of the end of their projected service lives.

The Independence, the second ship of the LCS class, will decommission on July 31, followed by the first LCS, the Freedom, on Sept. 30, according to the San Diego-based Naval Surface Force Pacific. Plans to decommission the third ship of the class, the Fort Worth, and the fourth, the Coronado, were nixed by Congress in this year’s budget.

The Coronado only entered service in 2014. The ships, the Navy says, were designed to operate for at least 25 years.

The Navy said the money it saves in maintaining the first two ships will be put to better use elsewhere. Those ships, along with the Fort Worth and Coronado, are test platforms and are configured differently than newer littoral combat ships.

“To remain ahead of our competitors, particularly under fiscal constraints, it is important for Navy to carefully review our force structure regularly and divest of legacy capabilities that no longer bring sufficient lethality to the fight,” said Cmdr. Nicole Schwegman, a spokeswoman.

Schwegman said plans to decommission the Fort Worth and Coronado are on hold and the Navy has not yet made a decision on how to proceed.

When the Navy’s first littoral combat ship contract was awarded in 2005, the country was in the throes of fighting al-Qaida. U.S. troops occupied Iraq and Afghanistan and the Navy was looking for a vessel to operate close to shore. The ships were designed for automation and minimal manning — early on, the Navy planned to only put 40 sailors on board each ship, a number that has since expanded to 70.

In an unusual move, the Navy also elected to field two different versions of the ship from different shipbuilders — the steel-hulled 387-foot Freedom class, designed by Lockheed Martin and built by Marinette Marine in Marinette, Wis., and the 421-foot all-aluminum trimaran Independence class, designed and built by Austal USA in Mobile, Ala.

Both versions were meant to have the ability to go to sea with one of three interchangeable mission packages: anti-mine, anti-submarine or surface warfare.

In 2016, that modular model was abandoned, and the Navy said each ship would be dedicated to one of those three mission configurations.

“The Navy is not getting what they expected to get out of LCS at this point,” said Shelby Oakley, who oversees the GAO’s work on Navy shipbuilding.

The ships have had issues with their power trains. To achieve their high speed — sprinting as fast as 40 knots, or 46 mph — each ship has four engines, two diesel and two gas turbines, and is pushed through the water jets. In January, the Navy stopped accepting Freedom-class littoral combat ships after discovering a flaw in the ship’s transmission.

Testing is underway in Germany for a fix to the issue and the Navy is still working on a plan to install the fix on ships in the fleet, Schwegman said.

The Navy’s Independence-variants are based out of San Diego. All but two of the Freedom variants operate out of Mayport, Fla.; the Freedom and the Fort Worth are based in San Diego.

The differences continue inside the skin of the ships.

On the Kansas City — commissioned in San Diego last year — the bridge more closely resembles that of the fictional starships than a traditional Navy ship. Two pilot’s seats reminiscent of aircraft command the bridge. The ship’s commanding officer, Cmdr. Christopher Brusca, explained that the officer of the deck drives the ship by controlling both the power and direction of the ship’s four water jets with a dial, rather than a helmsman steering with a wheel. The ships have no rudders.

Key members of the crew are all based on the bridge, including the engineering watch officer, tactical action officer, fire controlmen and operations specialists.

The ship also has very few crew spaces and no living quarters below its waterline, meaning the risk of flooding from collisions or battle damage is relatively low — something unique to this variant, Brusca said.

The ship also lacks the steep, often slippery ladder-wells found on other vessels; sailors transit an actual staircase between the decks.

The trimaran hull gives the ship another notable advantage, Brusca said: it only sits about 14 feet deep in the water, meaning it can get closer to shore than most ships.

One of the issues with littoral combat ships is their lack of firepower. Combined with the aluminum hull of the Independence variants, concerns about survivability persist.

In 2019, the Navy installed the Naval Strike Missile on the San Diego-based Gabrielle Giffords, and it has since added the 100-mile-range anti-ship missiles to three more ships.

As a training vessel, the Kansas City does not yet have the missiles, Brusca said.

“An LCS that didn’t have those missiles? Maybe not very threatening in the open seas,” Brusca said. “Now that those missiles are on, you better pay attention to where the LCSs are and that we’ve got a lot of them.”

Littoral combat ships are able to launch and recover both manned and unmanned helicopters from their rear flight decks.

The decision to retire the first littoral combat ships was seen as yet another example of the Navy’s poor post-Cold War shipbuilding strategy.

Another class of cutting-edge ship in San Diego harbor — the stealth destroyers Zumwalt and Michael Monsoor — have no ammunition for their main armament, a gun that was supposed to shoot rocket-assisted shells. The shells became too expensive when the class was cut from 30 ships to three — again, partly because the Zumwalt class’ mission changed. Once optimized for fire support close to shore, now the class is being transitioned into a missile-firing role.

The main problem with littoral combat ships, according to GAO watchdogs, is the way the Navy went about developing and purchasing the vessels. The technology on the ships was being developed at the same time as the ships were being constructed.

“LCS is certainly one of those programs ... that was set up with a high-risk approach,” Oakley said. “And the outcome was reduced quantities, reduced capability, increased cost, schedule delays — all those things that you don’t want to have happen that happen all too frequently.”

Oakley said she’d recently embarked on a destroyer and noticed all the littoral combat ships sitting idle at Naval Base San Diego as they were leaving.

“All you’re seeing is LCS after LCS after LCS just sitting there, doing nothing,” she said. “So when you think about the stresses on the current fleet and all the things you hear about ships being run much longer (and) much harder than we expected ... having the LCS fleet and many of them just sitting there not accomplishing what they should be accomplishing really compounds that issue.”

Diana Maurer, who has been monitoring the LCS program since the beginning for the GAO, stopped short of calling the program a boondoggle.

“I think the simple way to answer whether this is or is not a success is just to look at the fact that the Navy is in the process of buying an entirely new class of ships — the frigate — because of shortfalls in the LCS,” Maurer said. “I think the thing that is most troublesome is ... who answers for the millions, the billions that have been left unused?”

Maurer said that the Navy wasn’t really able to try the ships before buying them. “The Navy had to kind of abandon that because the initial costs started being too high.”

Operation costs are also high with littoral combat ships. Because the ships are minimally manned, much of the maintenance and repair work is performed by expensive government contractors who have to travel to perform their jobs, the GAO said. The Navy also lacks technical data to maintain several systems, the report said.

Adm. Mike Gilday, the chief of naval operations, said the Navy is looking for ways to shift some of that maintenance to sailors in an interview with Defense News this month.

However, the manning levels on the ship could limit how much is shifted and that the Navy could adjust the manning on board to meet that need, Gilday said.