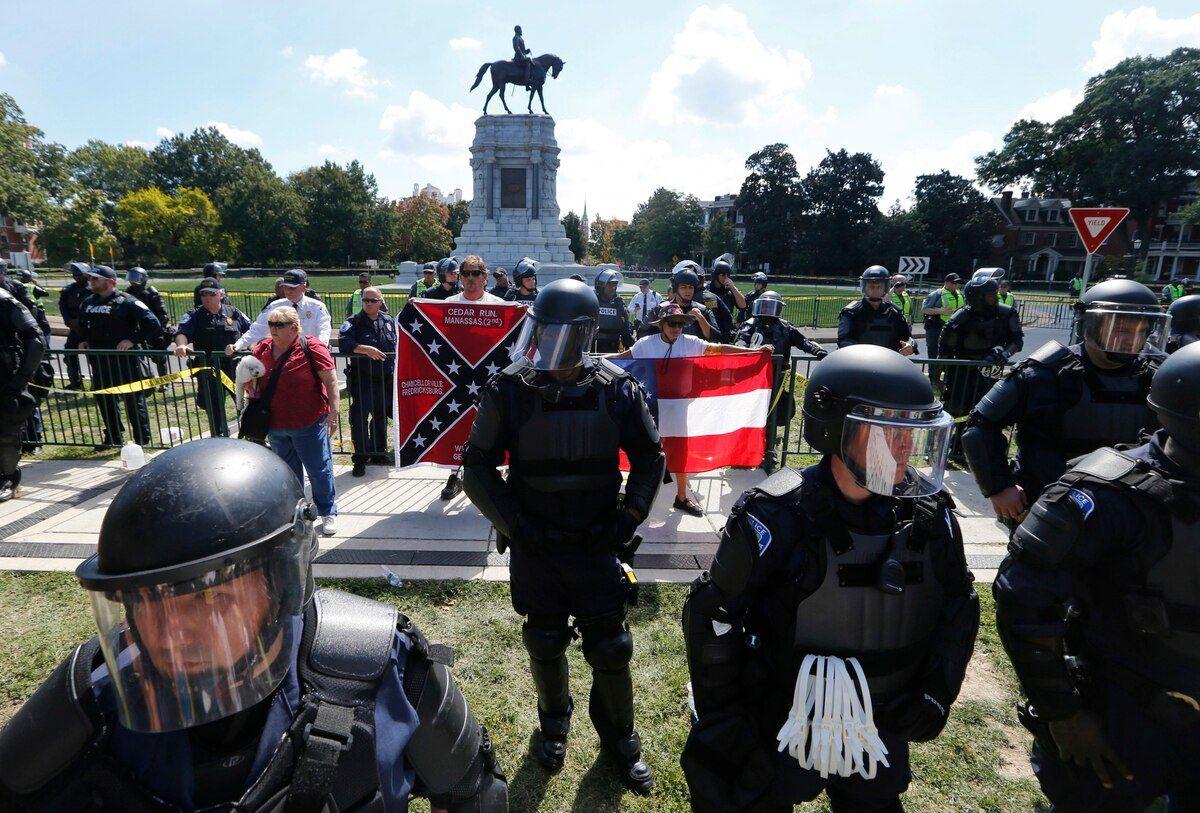 EDS NOTE: OBSCENITY - An image of George Floyd is projected on the base of the statue of Confederate General Robert E. Lee on Monument Avenue, Monday, June 8, 2020, in Richmond, Va. The statue has been the focal point of protester over the death of George Floyd. Virginia Gov. Ralph Northam has ordered the removal of the statue.

EDS NOTE: OBSCENITY - An image of George Floyd is projected on the base of the statue of Confederate General Robert E. Lee on Monument Avenue, Monday, June 8, 2020, in Richmond, Va. The statue has been the focal point of protester over the death of George Floyd. Virginia Gov. Ralph Northam has ordered the removal of the statue.

WASHINGTON — Abandoning decades of resistance, the Pentagon signaled Monday that it is open to stripping the names of Confederate heroes off Fort Hood and nine other Army posts, including one named for the rebels’ top general, Robert E. Lee.

Defense Secretary Mark Esper added his voice to the shift hours after Army Secretary Ryan McCarthy’s office said he was open to the idea.

The announcement came two weeks into nationwide demonstrations against police brutality and racism, and backlash against President Donald Trump’s initial push for a military response to quash the protests.

“The secretary of defense and secretary of the Army are open to a bipartisan discussion on the topic,” said Lt. Col. Emanuel L. Ortiz, a spokesman for the Army.

As recently as three months ago, McCarthy said the Army would not follow the lead of the Marine Corps when it banned Confederate symbols as part of an effort to root out white supremacy in the ranks and to end ongoing offense to black personnel.

Pressure has built on the military, and on states and cities, since the May 25 death of George Floyd in Minneapolis, where a police officer pinned Floyd’s neck to the ground with his knee for nearly nine minutes.

Fort Hood, the largest U.S. military installation in the world, is named for Gen. John Bell Hood of Kentucky, a West Point graduate who lost the use of his left arm at the battle of Gettysburg, fighting for the Confederacy, and later his right leg at the Battle of Chickamauga.

“Things are moving in the right direction,” said Roosevelt Huggins, a past president of the Killeen Branch of the NAACP, and a retired command master sergeant in the Army. “We understand it and the reasoning for the Army now wanting to revisit the conversation. … Now is the time to do it.”

Roosevelt was stationed at Fort Hood during his Army career, and said that he has “always been aware of who the military installation was named after.”

Despite long-festering complaints, the Pentagon has resisted such change, and the issue has become a cultural and political flash point.

In late February, the Marines announced a ban on public displays of Confederate paraphernalia, underscoring the shift last Friday with fresh guidance.

“The Confederate battle flag has all too often been co-opted by violent extremists and racist groups whose divisive beliefs have no place in our Corps,” the Marines said. “This presents a threat to our core values, unit cohesion, security, and good order and discipline.”

And it’s one of 10 Army installations, all in the old South — Virginia, North Carolina, Louisiana, Georgia and Alabama — named for Confederate generals, a fact that has long rankled civil rights leaders and black soldiers serving their country at sites named for warriors who fought, among other things, to keep their ancestors enslaved.

— Fort Benning in Georgia, named for one of that state’s leading advocates of secession.

— Fort Bragg in North Carolina, home of the famed 82nd Airborne Division, named for a West Point graduate who fought for the South.

— Fort Polk in Louisiana, home to the Joint Readiness Training Center, which trains soldiers for overseas deployment. Lt. Gen. Leonidas Polk fought under Bragg before he was killed in 1864 as the Union marched on Atlanta.

The League of United Latin American Citizens, led by Dallas lawyer Domingo Garcia, has prodded the Army to rename Fort Hood for Sgt. Roy Benavidez, a legendary Mexican American Green Beret who survived an especially rough battle during the Vietnam War in 1968, saving eight comrades despite heavy enemy fire and his own severe injuries. President Ronald Reagan awarded him a Medal of Honor in 1981.

In Central Texas, where Republican Rep. Roger Williams of Austin is defending a district that includes Fort Hood, his Democratic challenger quickly lauded the Army’s newfound willingness to address the issue.

“Those in open rebellion to the United States over the ability to own slaves do not deserve places of honor,” tweeted Austin lawyer Julie Oliver, noting the calls to rename Fort Hood to Fort Benavidez.

U.S. Rep. Mac Thornberry of Clarendon, former chairman of the Armed Services Committee and now its senior Republican, said he prefers to leave decisions about naming installations to the Pentagon “and kept out of the political process,” an apparent reference to a provision in the latest defense bill that passed the House with a ban on naming ships or bases after any Confederate leader.

But Thornberry said, “I welcome Secretary McCarthy and the Army looking at this issue.”

In 2017, clashes between white supremacists and counterprotesters in Charlottesville, Va., sparked a similar national conversation about monuments, schools and military bases named for Confederate heroes.

“We named a U.S. military base for a Confederate, someone who fought to destroy the United States,” Riakos Adams, secretary of the Killeen chapter of the NAACP and a 22-year Army veteran, said at the time. “It doesn’t make any sense.”

Other Army posts named for Confederate generals include Camp Beauregard, a training site for the Louisiana National Guard. Gen. Pierre Gustave Toutant Beauregard, another West Pointer who renounced his commission in the Union Army, led the defense of Charleston, S.C. The shelling of Fort Sumter on April 12, 1861, by troops under his command marked the start of the Civil War.

Virginia’s Fort Lee, outside the state capital of Richmond, which also served as capital of the Confederacy, honors Gen. Robert E. Lee, the South’s top general and the Union’s adversary at the battles of Gettysburg and Bull Run and other bloody sites in a war that claimed 750,000 lives on both sides.

Two weeks after Floyd’s death in Minneapolis, all members of the Richmond City Council have pledged to remove Confederate statues that tower above Monument Avenue downtown. Virginia Gov. Ralph Northam, a Democrat, had already announced a plan to remove a Lee statue from the historic boulevard.

After the Charlottesville clashes, Texans went through a wrenching debate about public displays that honored Confederate heroes. Dallas and dozens of other cities in Texas and other states reassessed statues and memorials, some of them erected during the Jim Crow era as a rebuttal to demands for equal rights.

Dallas Mayor Eric Johnson, then a Democratic member of the Texas House, was among the elected black officials in Texas pressing for the state to set aside such symbols.

But memories of Hood himself have faded, the name transforming into an eight-decade-old habit with no particular baggage.

“The name doesn’t remind soldiers of the Confederacy, the name reminds people of the men and women who have trained here,” retired Army Col. Ralph Gauer, a white Bell County resident, said in 2017. “That includes spectacular black units, like the 761st tank battalion.”

That all-black tank unit distinguished itself in combat during World War II, when the Army was still segregated.

Pentagon allows personnel in Colorado, 38 other states to pack up, move