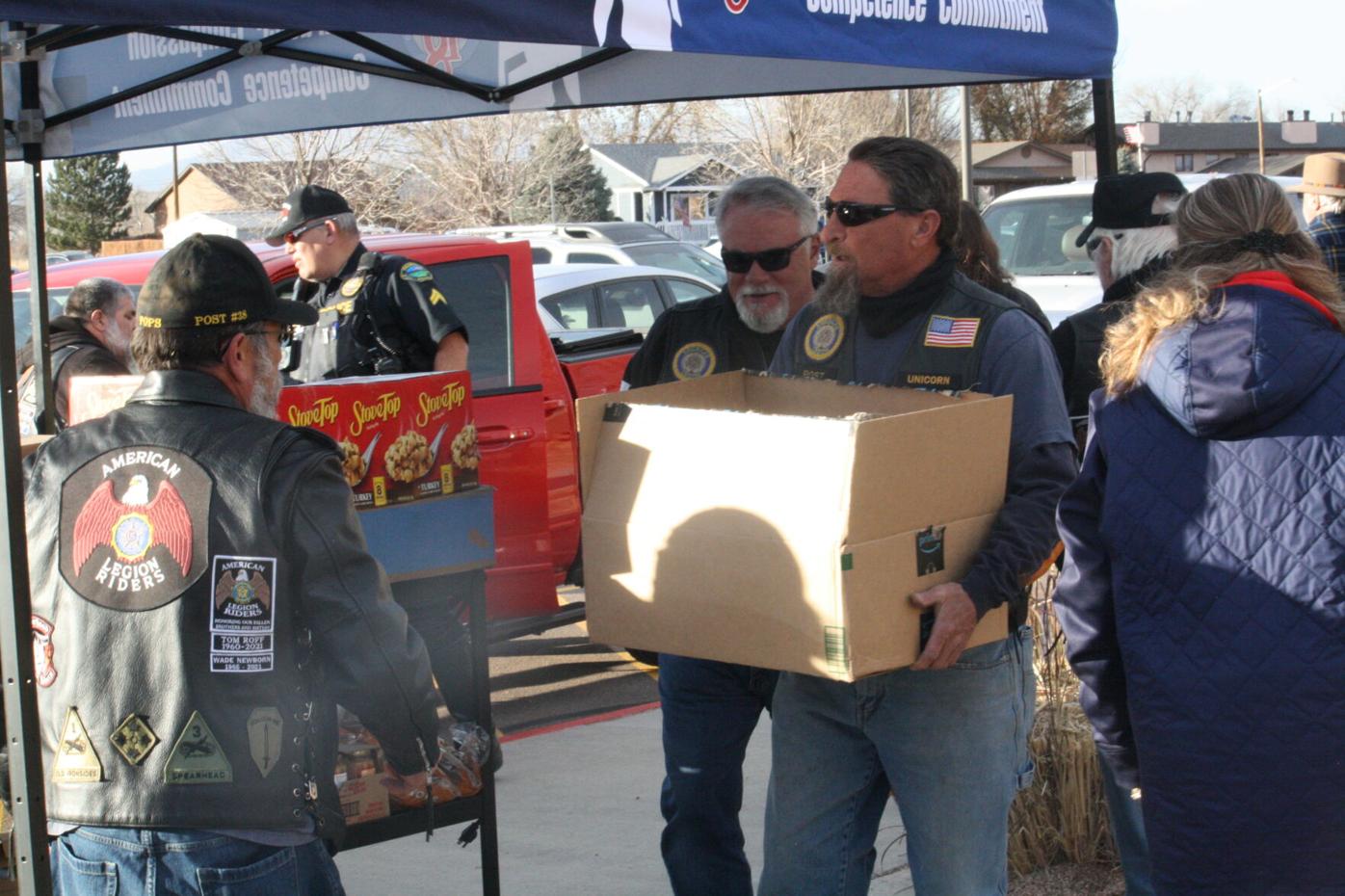 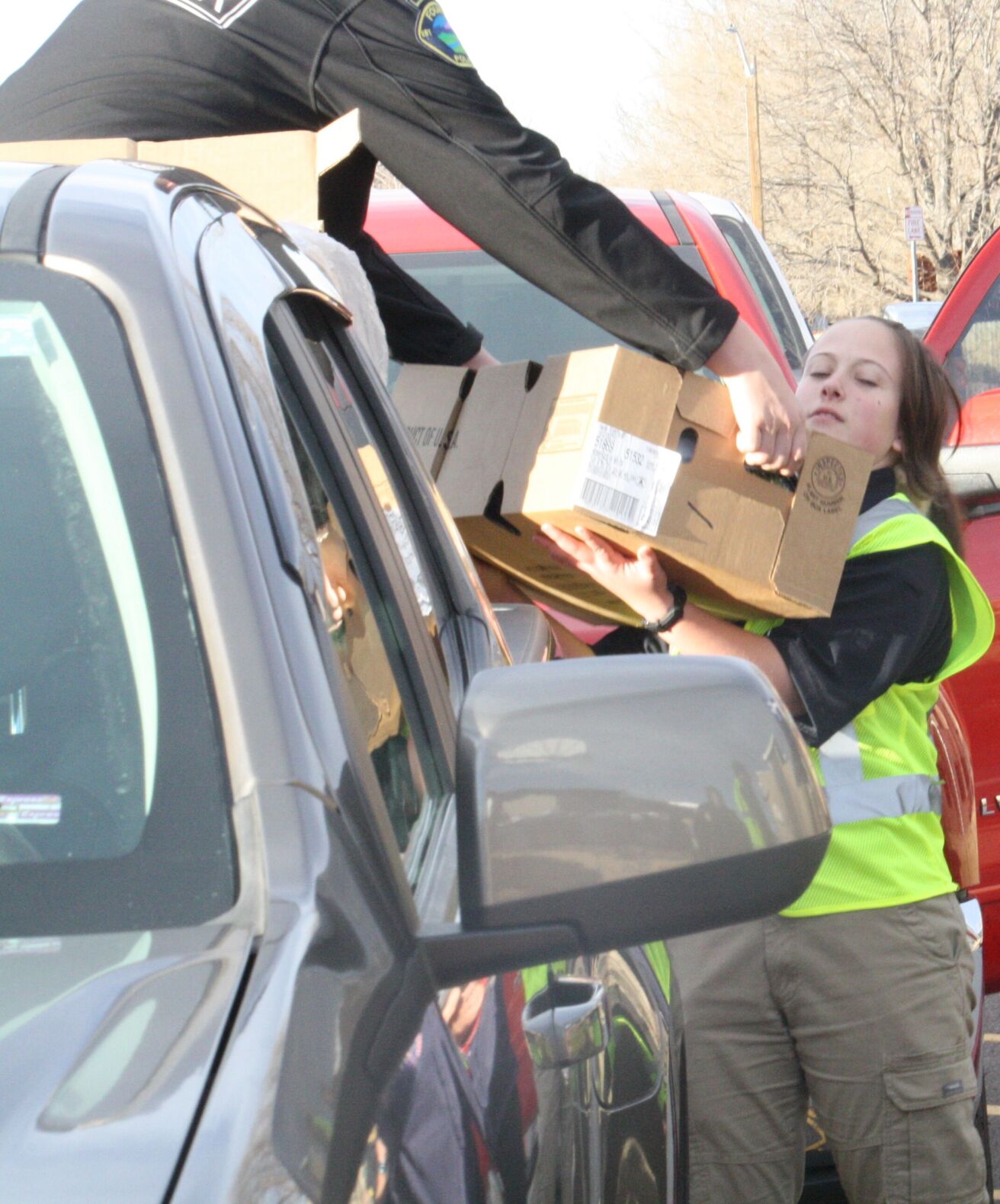 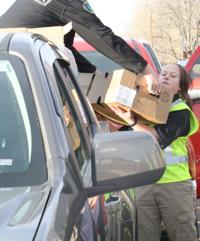 A volunteer loads a box of food into a vehicle during a food giveaway at the Welte Education Center in Fountain on Thursday.

A volunteer loads a box of food into a vehicle during a food giveaway at the Welte Education Center in Fountain on Thursday.

Students and staff from Fountain-Fort Carson School District 8, Fountain police officers, and members of the American Legion joined forces on Thursday to help hundreds of district and military families have a happier Thanksgiving holiday.

The volunteer group distributed nearly 400 holiday meals in a drive-through food giveaway at the Welte Education Center in Fountain. Each participating family received a Thanksgiving meal with all the trimmings, including a turkey, stuffing, corn, and potatoes - free of charge.

Several members of American Legion Riders Chapter 38, armed with dozens of turkeys, arrived at the center in a motorcycle convoy and quickly got to work, helping put meals together before the families began to arrive. The veteran biker group had been conducting their own holiday food drive for several years before teaming up with the District 8 crew.

“We partnered with American Legion so we could serve more families as a unit, because they were already serving the community,” said social worker Promis Bruno, who coordinated the event. “We’re happy to have this partnership.”

Volunteers said the group is battling to fulfill a nutritional need that affects a significant portion of the Colorado population. According to a recent survey by Hunger Free Colorado, about one in every three Coloradans are food insecure, meaning they don’t have steady, predictable access to nutritious food. Additionally, economists and agriculture experts say that nearly every Thanksgiving food item – from the turkey, to the stuffing, to the pie – will be more expensive this year than in 2020.

“I feel the community at large, without a better word, has gotten poorer,” said Tim Means, director of American Legion Riders Chapter 38. “With inflation, people are hurting.”

Bruno said food scarcity in the Fountain area is exacerbated by the fact that much of the region is considered a “food desert,” meaning many residents don’t have nearby access to healthy food.

“A lot of people in the Fountain community live a good distance from the nearest grocery store,” Bruno said. “For a lot of our families, there’s a barrier to transportation, and that makes it difficult to get to where the food is.”

Families who signed up for the giveaway were able to receive their holiday meal without even getting out of their cars. They simply needed to drive up and open their trunk or rear door, and the volunteers did the rest.

“This is the most rewarding part of my job, providing supplemental food to families who need it,” said Bruno. “It’s not a one-man show. It takes a lot of coordination.”

District students worked side-by-side with bearded, leather-clad bikers to sort, arrange, and deliver meals. Some students were there to receive community service credit. Others, like Dominik Nikpourfard, simply wanted to help families have a satisfying Thanksgiving.

“Everybody should have a good meal at Thanksgiving, and I like helping people,” said Nikpourfard, a freshman at Fountain-Fort Carson High School. “This is the right thing to do.”

2021 holiday events in and around the Colorado Springs area

Second Lt. Anthony D. Wentz, a student pilot killed Friday morning in what Laughlin Air Force Base in Texas is calling a mishap between two tr…