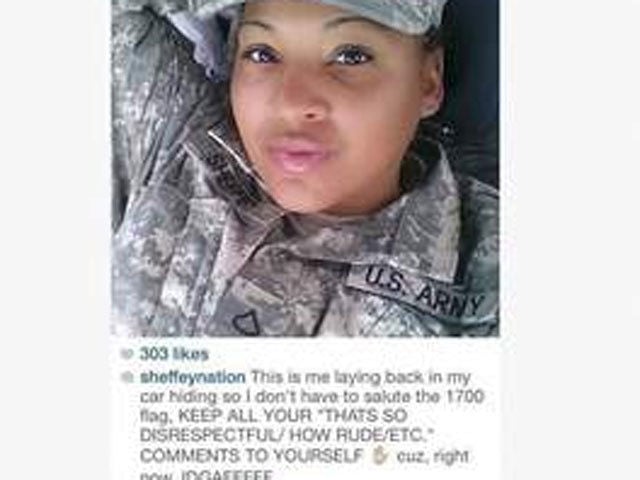 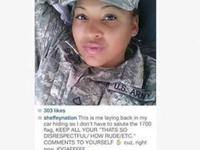 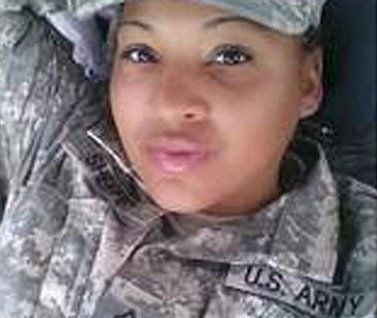 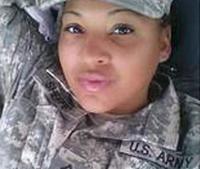 Fort Carson leaders launched an investigation into a "selfie" photo of a soldier posted online with a note that said she was hiding in her car to avoid saluting the flag. The soldier's Instagram image went viral Tuesday, drawing a storm of criticism.

Pfc. Tariqka Sheffey, of Fort Carson's 43rd Sustainment Group put the image on her Instagram account with a caption that read, "This is me laying back in my car hiding so I don't have to salute the 1700 flag, KEEP ALL YOUR 'THATS SO DISRESPECTFUL/HOWRUDE/ETC.' COMMENTS TO YOURSELF cuz, right now, IDGA FFFF (acronym for I don't give a 'expletive')."

Fort Carson officials say soldiers caught not saluting during the 5 p.m. retreat ceremony for the lowering of the American flag are subject to an "on the spot correction" - essentially a loud, one-sided discussion with a sergeant.

It's one of two events per day that require soldiers to stop what they're doing - even pull over and get out of their cars - to salute the flag in an act of tradition and military courtesy.

But Sheffey took the issue to a different level with her social media post. A quick Google search returned thousands of Internet entries for the quartermaster soldier. She was pilloried in hundreds of Twitter posts and thousands of Facebook comments.

Her picture went around the globe, drawing as much, or more, social media attention than Defense Secretary Chuck Hagel's Monday proposal to cut the Army's roster to pre-World War II levels.

The Army, alerted by complaints over the photo Tuesday, reacted at the highest levels. Fort Carson held a news conference with one of its most senior colonels in response to media attention.

The Army is taking the incident seriously and has launched a probe that could result in discipline, said Col. Heidi Hoyle, special assistant to the 4th Infantry Division commander.

"A soldier is required to salute," Hoyle said.

At worst, the incident could lead to a court martial for insubordination or failure to obey regulations. If convicted for such crimes, a soldier could face up to two years in prison.

Hoyle said she couldn't discuss specifics of the case because the investigation was underway.

Fort Carson sources said the incident had drawn scrutiny at the highest levels - a sign of Pentagon concern.

The salute is a custom held in great regard by the military as an exclusive greeting between warriors. Officers and top civilian leaders get salutes.

At the beginning of the day as the flag is raised at reveille, and at the end during retreat, the salute is given to honor the nation they serve.

"The customs and courtesies are the way we start each day and end each day," Hoyle said.

Still, Sheffey is far from the first private to avoid standing at stiff attention to salute the flag. In some circles of the junior enlisted ranks, hiding from the retreat formation is seen as a form of sport - one of few options of mild rebellion available to troops who live strictly regimented lives under the watchful eyes of their corporals and sergeants.

"I've seen soldiers that looked at their watch and, as soon as it was getting close to retreat, would duck inside of a building to avoid the formation," admitted retired Command Sergeant Maj. Terrance McWilliams, who served as Fort Carson's top enlisted soldier.

Wes Clark, who began his Air Force career as an enlisted airman and retired as a two-star general, said some of his young comrades would go to great lengths to avoid officers, crossing the street or hiding to avoid the required salute they would render and the commanding stare they might receive.

But Sheffey's post may be the first salute-dodging to gain national notoriety.

"I think the dumbest thing was posting it on social media," McWilliams said.

This is the third incident within two weeks to bring troops under scrutiny for photographs posted on social media that went viral and sparked outrage.

Several Wisconsin National Guard members were suspended from funeral honors detail last week after an image posted on social media showed them posing around a casket covered with the U.S. flag.

An Air Force sergeant also was the subject of an investigation after a three-year-old photo of her kissing a Prisoner of War-Missing in Action symbol surfaced online.

The military is stuck with social media because soldiers don't surrender all of their free speech rights when they put on the uniform. They are limited in their ability to endorse candidates, criticise all levels of government and can be disciplined for obscene material.

But the Army's biggest concern in its social media handbook is operation security - preventing information that could be used by enemies from appearing online.

"Photos and videos can go viral quickly," the Army instructs troops. "Closely review them before posting to ensure they don't give away sensitive information which could be dangerous if released."

Hoyle said the Army is working to train troops to use common sense on social media.

"We expect them to maintain and uphold the standards," she said.

According to an Army Times report, Sheffey followed up with a video on Instagram Tuesday to express regret for the photograph, but stopped short of an apology, saying, "I seriously just want to say thank you to everybody who stood up to me today, like seriously. That s*** to me was not that serious. I am not a disrespectful soldier and I really appreciate you all."