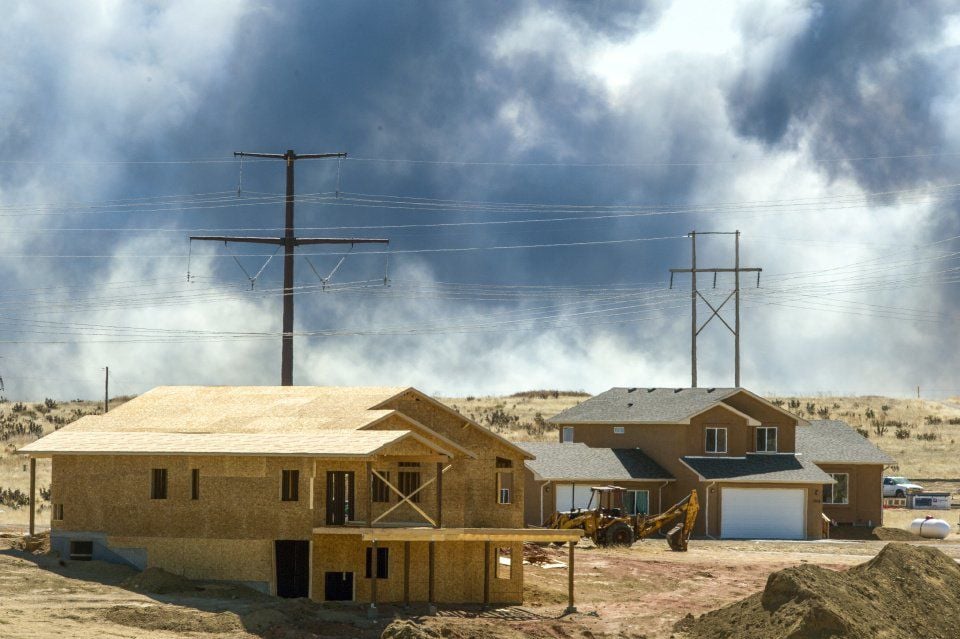 Smoke from the Carson Midway wildfire billows behind homes in Hanover in March. Training exercises at nearby Fort Carson were blamed for starting the blaze. 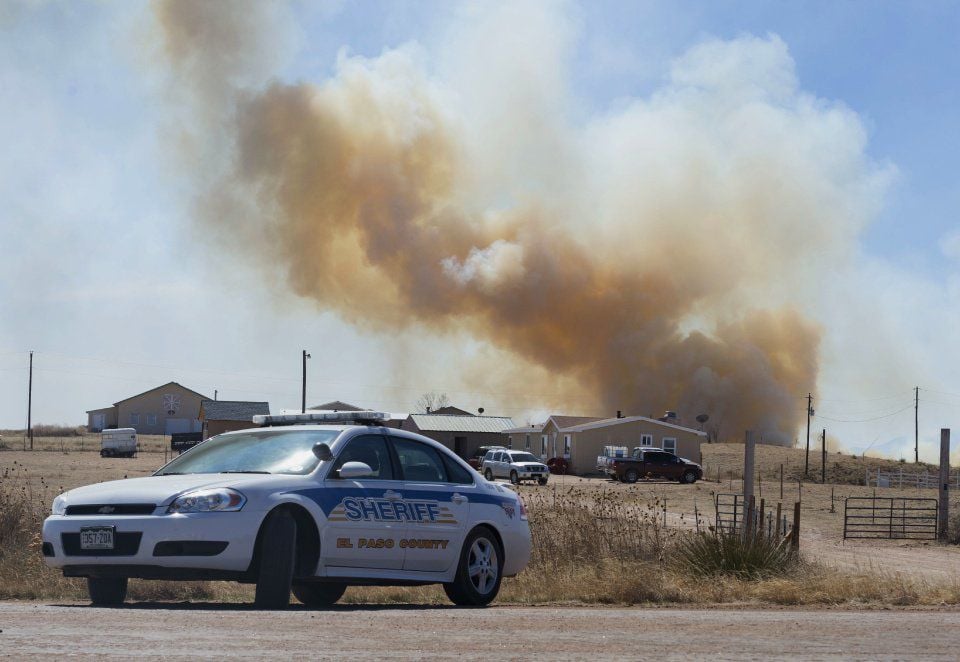 An El Paso County sheriff's car sits on the side of the road as firefighters, law enforcement and other service members help to battle a wildfire, named the Carson Midway wildfire, in Hanover, Colo., Friday March 16, 2018. (Dougal Brownlie/The Gazette via AP)

Smoke from the Carson Midway wildfire billows behind homes in Hanover in March. Training exercises at nearby Fort Carson were blamed for starting the blaze.

An El Paso County sheriff's car sits on the side of the road as firefighters, law enforcement and other service members help to battle a wildfire, named the Carson Midway wildfire, in Hanover, Colo., Friday March 16, 2018. (Dougal Brownlie/The Gazette via AP)

Colorado’s wildfires and floods are key components of a new Defense Department report highlighting the impact of climate change on military facilities.

While the Trump administration has questioned whether climate change is real, with the president tweeting this month that winter storms debunk the work of a generation of scientists, the Pentagon fears that wildfires, drought and floods could affect military operations.

A key example is the fires that started on Fort Carson and spread east into a civilian neighborhood last year.

“In March 2018 two related wildfires broke out in Colorado during an infantry and helicopter training exercise for an upcoming deployment,” the report says. “Later determined to be due to live fire training, gusty winds and dry conditions allowed the fire to spread, reaching about 3,300 acres in size, destroying three homes, and causing the evacuation of 250 homes.”

The report found that Peterson and Schriever Air Force bases and Cheyenne Mountain Air Force Station are vulnerable to fire because of climate change. The nation’s underground mountain command post is also vulnerable to floods, the report said.

President Donald Trump expressed his doubt about climate change this month as a winter storm lashed the East Coast.

“Be careful and try staying in your house,” Trump wrote on Twitter. “Large parts of the country are suffering from tremendous amounts of snow and near record-setting cold. Amazing how big this system is. Wouldn’t be bad to have a little of that good old fashioned global warming right now!”

But the president is confusing weather with climate, said Andreas Prein, a physicist at the National Center for Atmospheric Research.

Weather changes quickly, while climate researchers look at trends over decades or centuries, Prein said. Those studies have convinced Prein that it’s getting hotter quickly.

“You can see now we have much more frequent warm winters,” he said.

Those warm winters are shrinking snowpack in the Rockies and leaving the plains with more rain than snow. They also are lengthening the wildfire season, making blazes like the one on Fort Carson far more common.

The Pentagon report said all bases in the Pikes Peak region are at risk due to fire.

Prein said the climate is also creating more severe rainstorms, causing more flooding in the Rockies. That was on display in 2013, when a storm dropped more than a foot of rain on Cheyenne Mountain in a few hours. The deluge caused a massive mudslide, which closed the primary entrance to the underground complex.

The military invested millions in a flood mitigation program for the site, which houses critical military computer systems and is designed to be a bombproof wartime headquarters for the North American Aerospace Defense Command and missile defense troops. The Pentagon said the mountain is still vulnerable to flooding, though.

For every degree of temperature increase, he said, the capacity of clouds to hold moisture increases by 7 percent. It’s a symptom of a changing climate, Prein said.

“If you look at very heavy rainfall, you see it more frequently,” he said.

The Pentagon’s report found that the majority of its 79 most critical bases are at risk in the changing environment.

“The effects of a changing climate are a national security issue with potential impacts to Department of Defense missions, operational plans, and installations,” the report said.

Oversight of the Arctic falls squarely on the U.S. Northern Command in Colorado Springs, which has kept a wary eye on melting polar ice for more than a decade. The command is responsible for keeping watch on air and sea lanes leading to the continent to prevent attack.

Retired Air Force Gen. Gene Renuart, who led Northern Command from 2007 to 2010, said the problems in the Arctic remain a key concern.

A sea lane across the top of North America has opened in a region once locked by ice, Renuart said.

“As more water is navigable, there is more potential for competition for vital resources — fishing, oil and natural gas exploration, and in today’s world military intrusion from nations like China and Russia,” he said.

In recent years, Russia has run massive Arctic exercises to show off its ability to make war in the extreme north. A number of explorations of the new passage by ships from China have been reported, and that nation could benefit greatly from a shorter sea lane to Europe.

“This has huge implications,” Renuart said.

The military has pushed for more Coast Guard icebreakers and more ice-capable warships to deal with the new channel and is sending more submarines north.

On issues faced by local bases, the military has not sat on its hands.

Fort Carson has launched a massive effort of controlled burns this winter to remove dry brush. A similar effort has taken place on Cheyenne Mountain, which also has a new system of channels to redirect water in the worst rainstorms.

Retired Army Col. Bob McLaughlin, who served as Fort Carson’s garrison commander from 2009 to 2012, said the work to pursue green power and mitigate fire risks wasn’t necessarily focused on climate change. But the Army did want to set an example for the rest of the community on caring for the environment.

“It was all about being good stewards of the environment and setting the example of what right looks like,” he said.

The report found that Peterson and Schriever Air Force bases and Cheyenne Mountain Air Force Station are vulnerable to fire because of climate change.

Commission punts on whether women should face draft

A national commission looking at military and public service has reached no firm conclusions on one its top issues: whether women should be su…