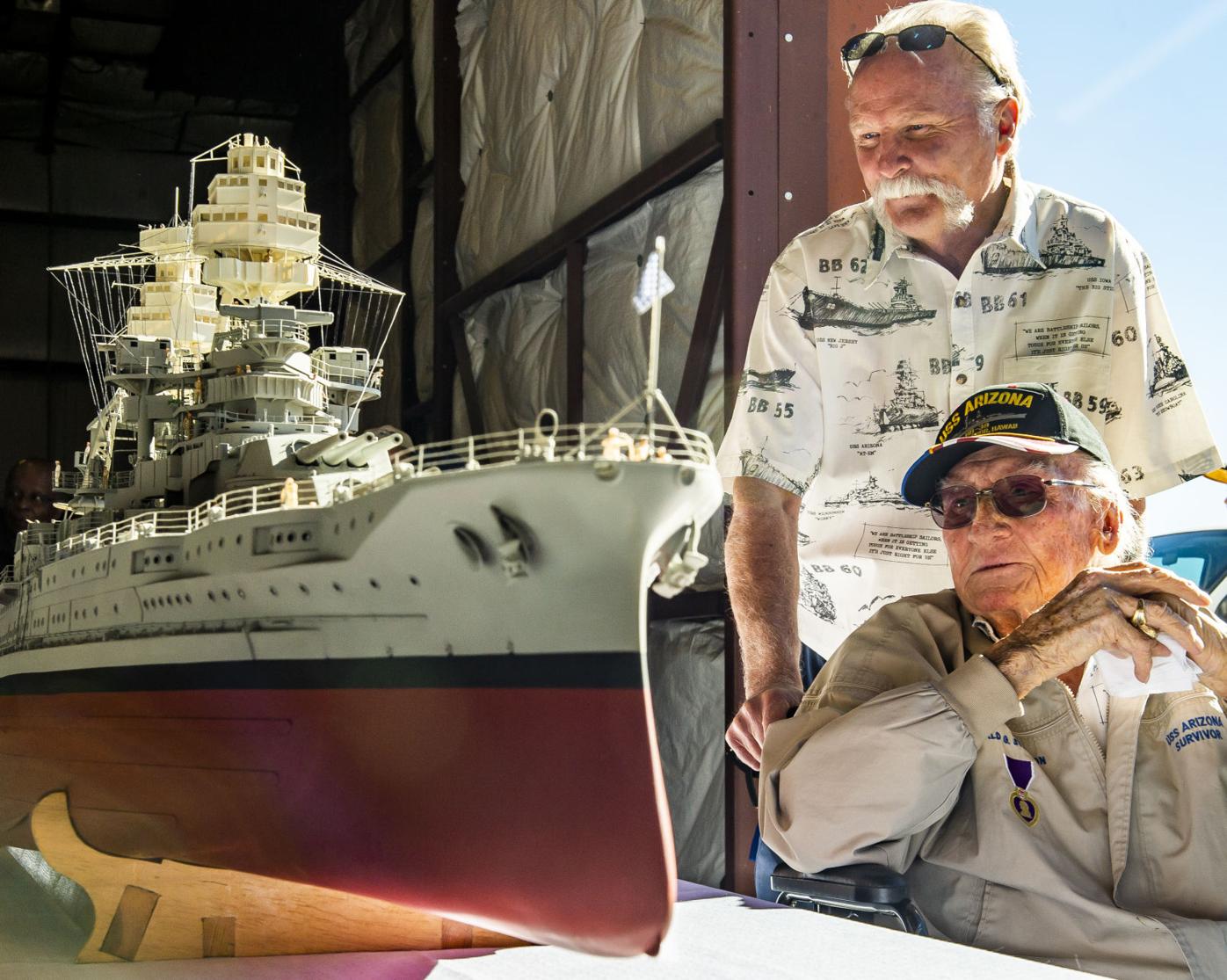 USS Arizona survivor Don Stratton and son Randy admire the craftsmanship of Jozef Szydlowski who created a 1/72nd scale model of the WWII battleship that was presented at the National Museum of World War II Aviation in 2019 in Colorado Springs. 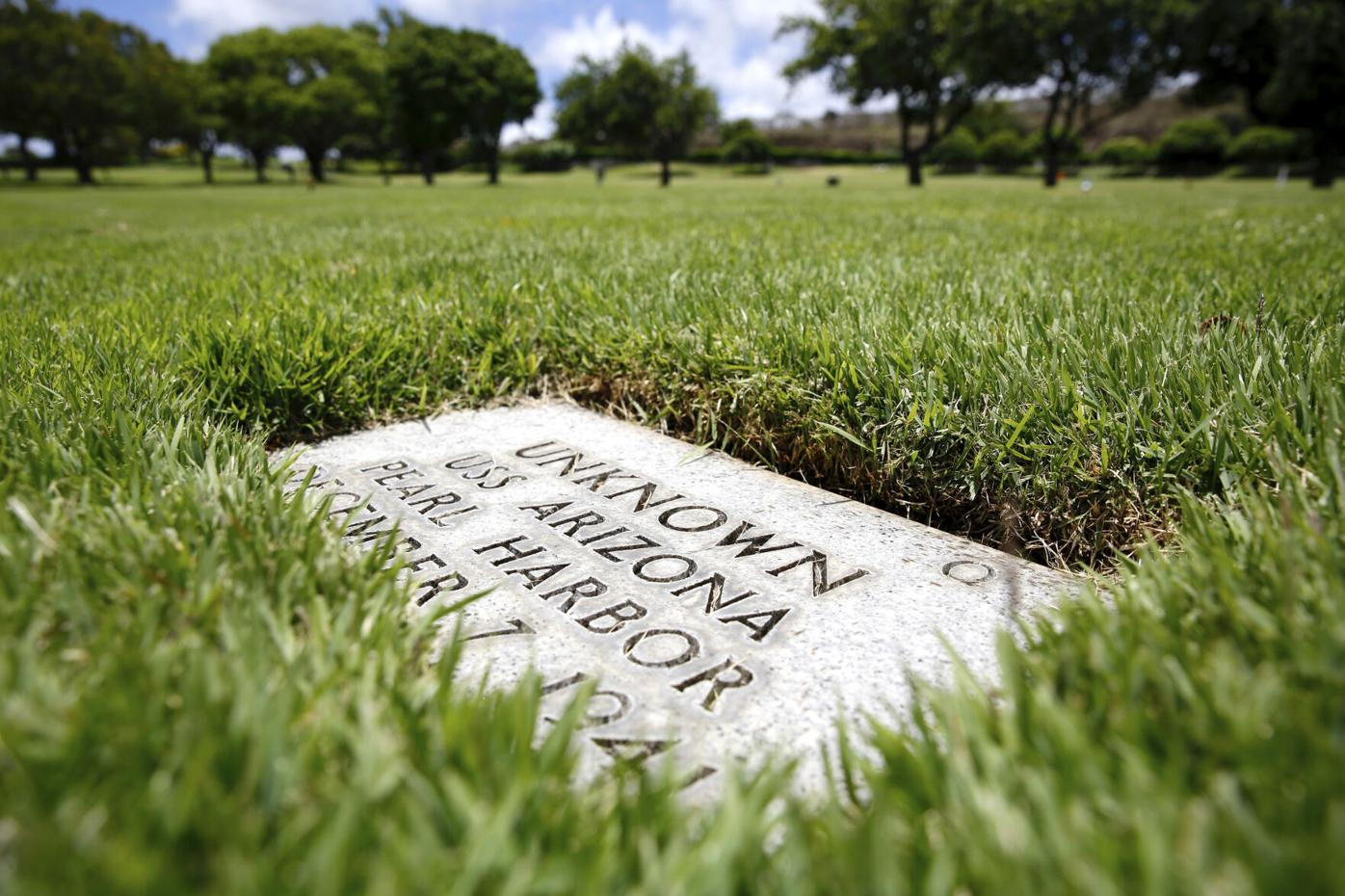 A grave marker for an unknown casualty from the USS Arizona is shown at the National Memorial Cemetery of the Pacific on Thursday, July 15, 2021 in Honolulu. Advances in DNA technology have allowed the U.S. military to exhume and identify the remains of hundreds of sailors and Marines buried as unknowns from the bombing of Pearl Harbor, decades after the 1941 attack that launched the U.S. into World War II. But the Defense POW/MIA Accounting Agency, which is responsible for locating and identifying missing servicemen and women, says it won’t be able to do the same for those from the battleship that lost the most men that day: the USS Arizona. (AP Photo/Caleb Jones) 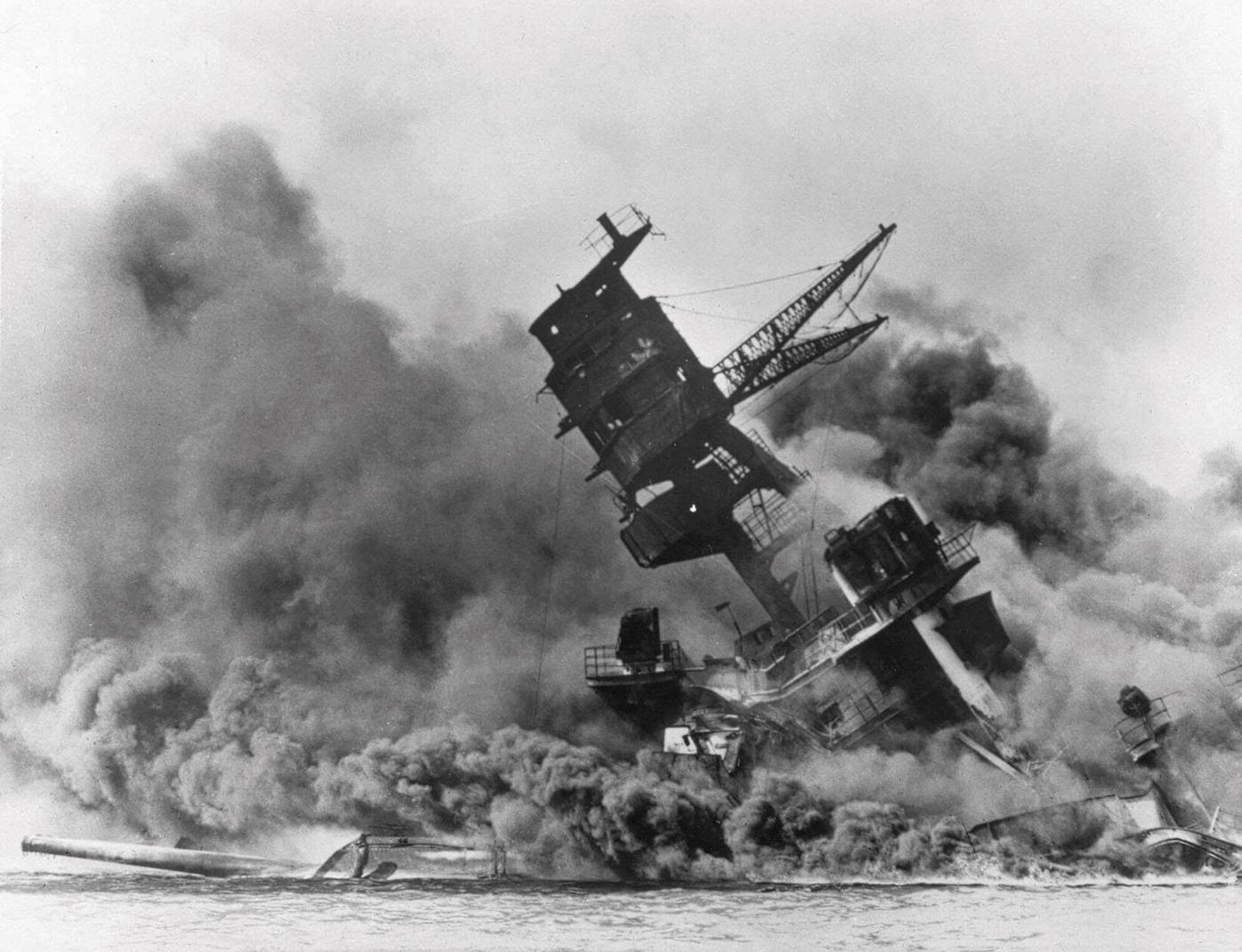 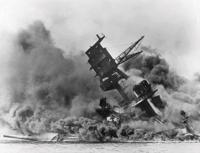 Smoke rises from the battleship USS Arizona as it sinks Dec. 7, 1941, during a Japanese surprise attack on Pearl Harbor, Hawaii. 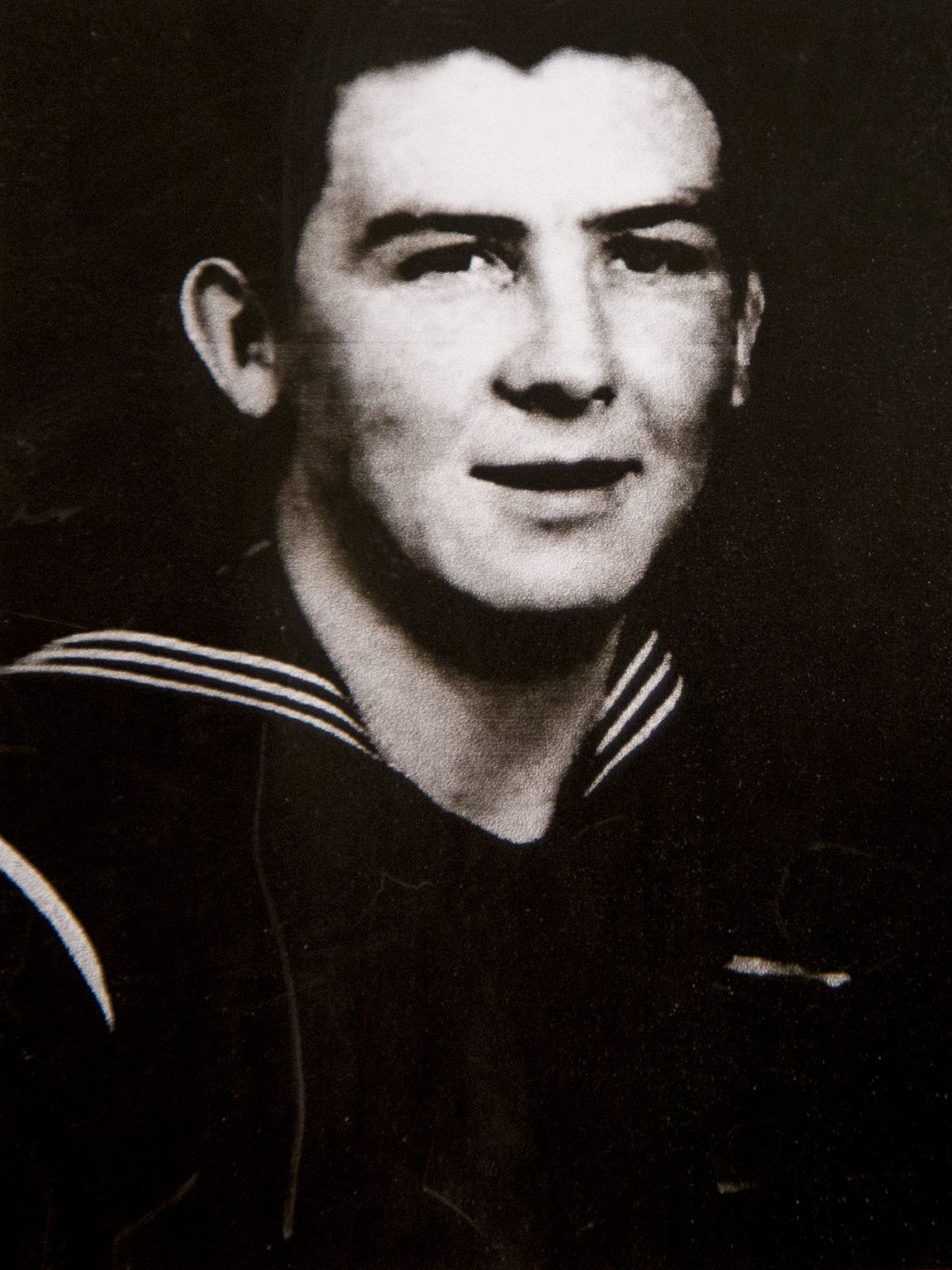 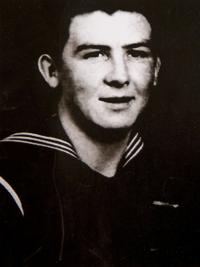 Donald Stratton’s enlistment photo. Stratton was one of the survivors of the Dec. 7, 1941, Japanese aerial attack on the Navy base at Pearl Harbor, Hawaii. More than 1,100 crew members died on the USS Arizona. 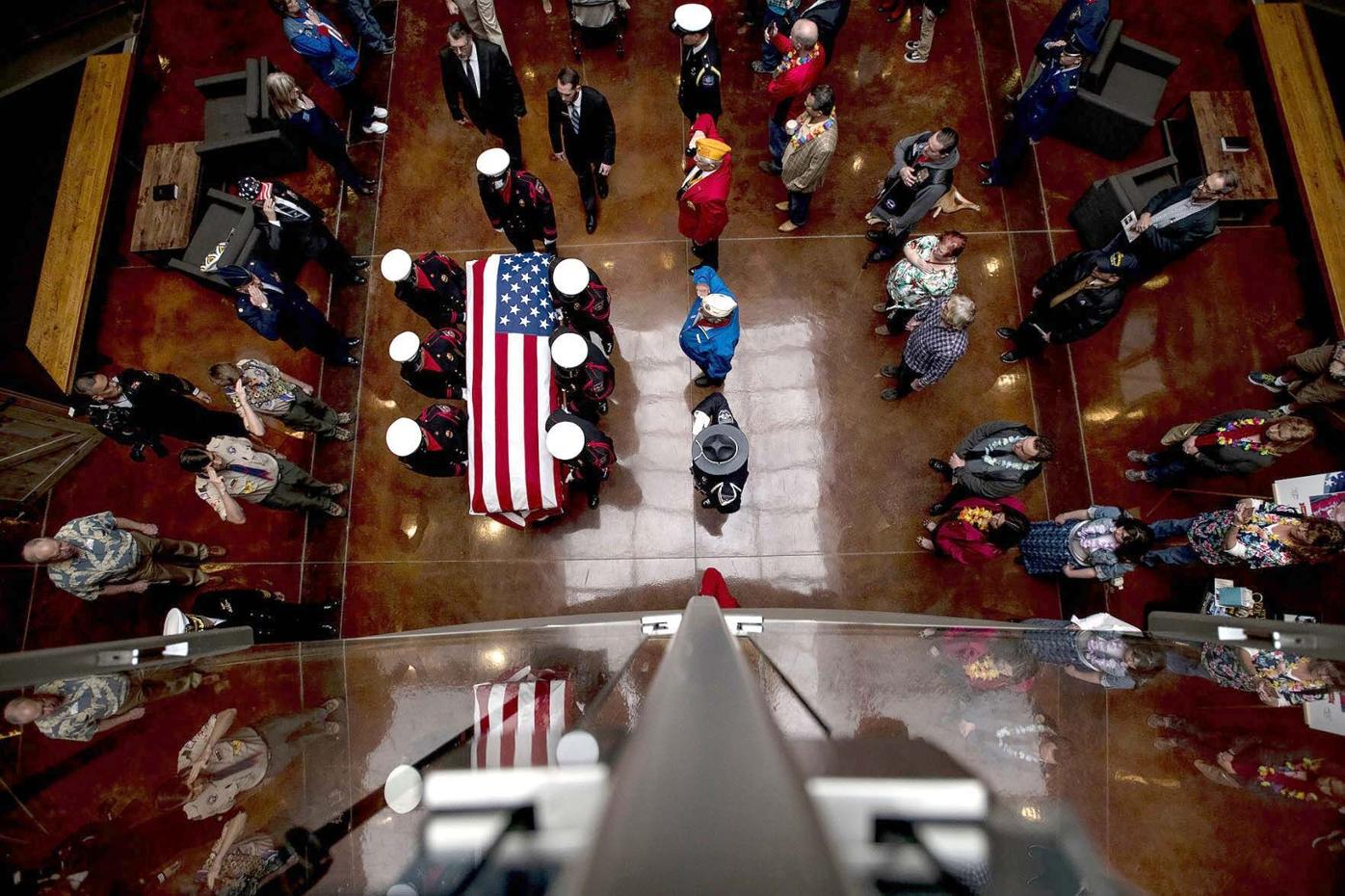 Honor guard members carry the casket of WWII veteran Donald Stratton into the chapel during a memorial service held at the Rocky Mountain Calvary Chapel on Feb. 29. Stratton was a survivor of the USS Arizona during the Dec. 7, 1941 Japanese attack on Pearl Harbor.

USS Arizona survivor Don Stratton and son Randy admire the craftsmanship of Jozef Szydlowski who created a 1/72nd scale model of the WWII battleship that was presented at the National Museum of World War II Aviation in 2019 in Colorado Springs.

Honor guard members carry the casket of WWII veteran Donald Stratton into the chapel during a memorial service held at the Rocky Mountain Calvary Chapel on Feb. 29. Stratton was a survivor of the USS Arizona during the Dec. 7, 1941 Japanese attack on Pearl Harbor.

A Colorado man is determined that human remains from the USS Arizona are DNA tested and identified after a Pentagon agency in February suggested exhuming 85 gravesites marked “unknown” and entombing the dead in the sunken battleship at Pearl Harbor.

Randy Stratton — son of Donald Stratton, who survived the surprise attack the morning of Dec. 7, 1941, aboard the USS Arizona despite suffering burns to more than 60% of his body — wants descendants of the deceased to decide what happens with the remains. And because of the actions of Rep. Doug Lamborn, R-Colorado Springs, that may be a possibility.

Lamborn added an amendment to the National Defense Authorization Act earlier this month proposing that all USS Arizona unknowns buried at the National Memorial Cemetery of the Pacific at Punchbowl Crater in Honolulu be identified.

Lamborn is also asking that the Defense POW-MIA Accounting Agency — which is tasked with locating, recovering and identifying deceased military personnel from war zones throughout the world — allow assistance from the private sector to identify the dead.

Lamborn is confident the amendment has strong support, and he doesn’t expect any problems on the House floor.

“I hope this brings closure to the families,” he said.

When the USS Arizona was hit by a bomb that ignited the ship's own forward ammunition magazines, temperatures reached as high as 8,000 Fahrenheit — three times that of lava — cremating most of the crew, Jay Blount, a spokesman for the Pearl Harbor National Memorial, told TIME Magazine in 2019. Of the 1,512 crew, 1,177 died, including more than 900 who went down with the ship and are entombed.

When the Defense POW-MIA Accounting Agency received pushback about the idea of entombing the USS Arizona unknowns, the organization decided not to try to identify them at all, according to Stratton, who said that created more problems, since the agency had already identified unknowns from other ships, including the USS Oklahoma, another casualty of the Pearl Harbor attack.

That’s when Stratton, who recently moved from Colorado Springs to Castle Rock, reached out to Lamborn.

“When you say no man left behind, Doug Lamborn took that to heart and made sure that the family members are going to be able to see their loved ones honored,” Stratton said.  His father, Donald Stratton, died in February 2020 at the age of 97.

If COVID-19 regulations allow, Stratton and other family members plan to be at Pearl Harbor this December for the 80th anniversary of the bombing.

He also plans to visit the National Memorial Cemetery of the Pacific.

“We are going to tour all the unknown graves and talk to them personally and let them know that they are going to be coming home soon,” Stratton said.

Earlier this year Stratton posted on Twitter asking if anyone knew anything about DNA. He quickly heard back from George Heinrichs, CEO of ANDE Corporation in Longmont.

After hearing what Stratton was attempting, Heinrichs said the company — which makes rapid DNA testing units roughly the size of a microwave that produce results in under two hours — would gladly help. And he offered to help free of cost.

“When I heard the story of the people who served on the USS Arizona that they weren’t identified yet, it just seemed crazy to me,” Heinrichs said. “We will offer our technology and resources to get it done because I believe we owe it to them.”

ANDE Corporation’s equipment was used by the military to quickly identify Abu Bakr al-Baghdadi, leader of Islamic State of Iraq and the Levant, in 2019 when he blew himself up.

Their equipment was also used to help identify the more than 80 people who died in Paradise, Calif., in late 2018 during the Camp Fire.

“Normally, that process, if they do it at all, takes years, particularly with remains that have been burned at the temperatures of that fire,” Heinrichs said. “Using our technology, we can process the remains and give you an ID.”

Identifying sailors and Marines from 80 years ago is possible, but it requires digging up the remains and comparing them to family DNA samples, which will need to be collected.

“I think we have a high probability of identifying the remains that are there,” Heinrichs said. “And if we’re diligent in getting the reference database built with family members, hopefully we’ll be equally successful identifying all the exact individuals.”

In the past few days, Stratton said numerous county sheriff's offices have volunteered to collect DNA samples once this initiative really gets going.

But for now, Stratton can be reached at www.facebook.com/ussarizonasurvivor or ussarizonaunknowns@gmail.com.

Heinrichs said ANDE Corp. is looking at ways to ensure privacy for those who provide DNA samples.

“I’m excited to get this done,” Heinrichs said. “This will warm my heart.”

NASA astronaut, Vietnam veteran and 1964 Air Force Academy graduate retired Col. Fred Gregory was honored by his alma mater Thursday with an a…