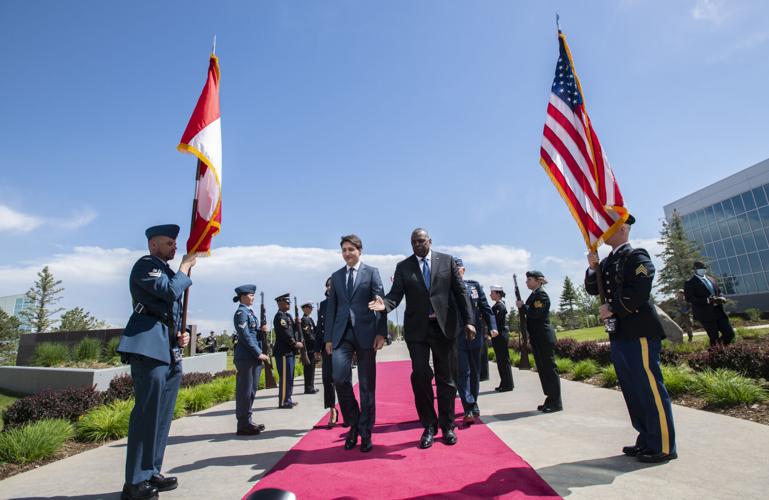 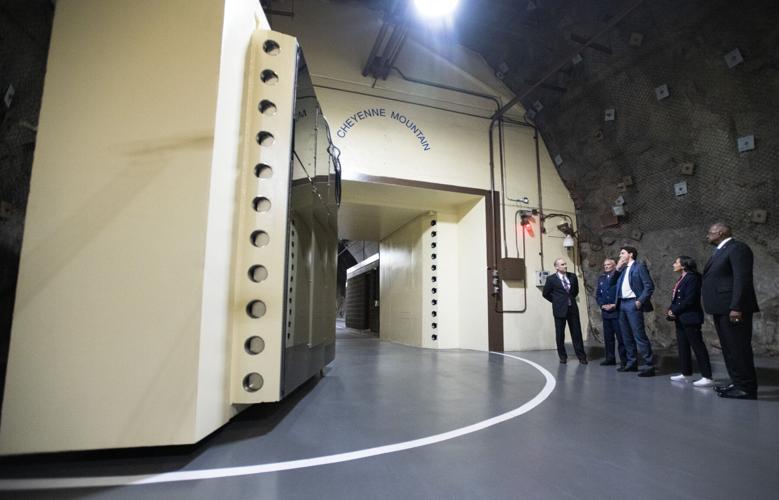 Canadian Prime Minister Justin Trudeau, third from left, watches the bomb doors inside the Cheyenne Mountain Complex open and and close while touring the mountain with U.S. Secretary of Defense Lloyd Austin, right, Canadian Minister of Defense Anita Amand, second from right, and Gen. Glen VanHerck, left of Trudeau, during a visit to Colorado Springs Tuesday, June 7, 2022. Lead Engineer Steve Galayada, left, was giving the tour of the mountain. (The Gazette, Christian Murdock) 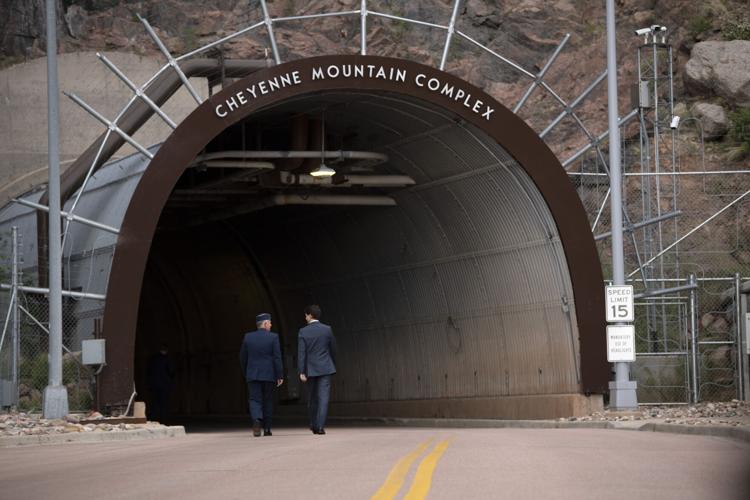 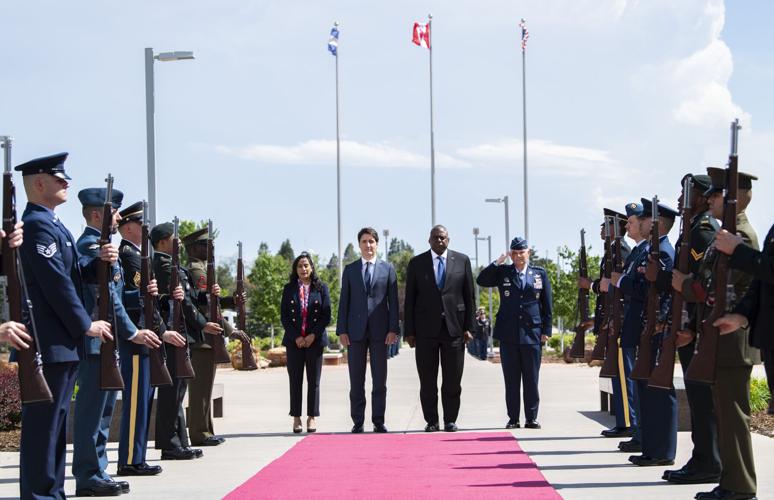 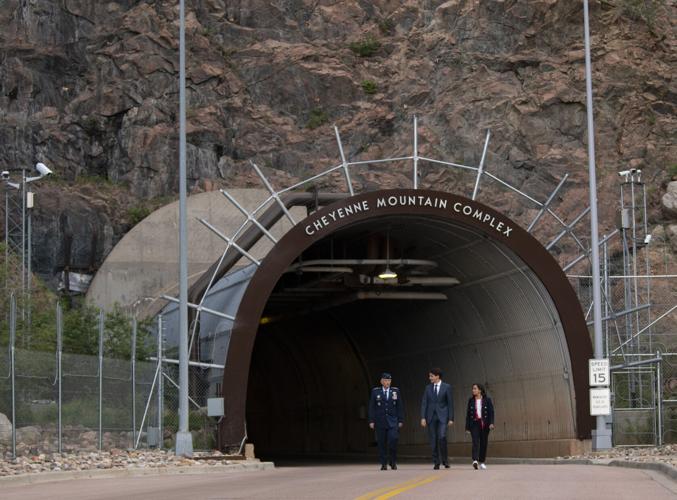 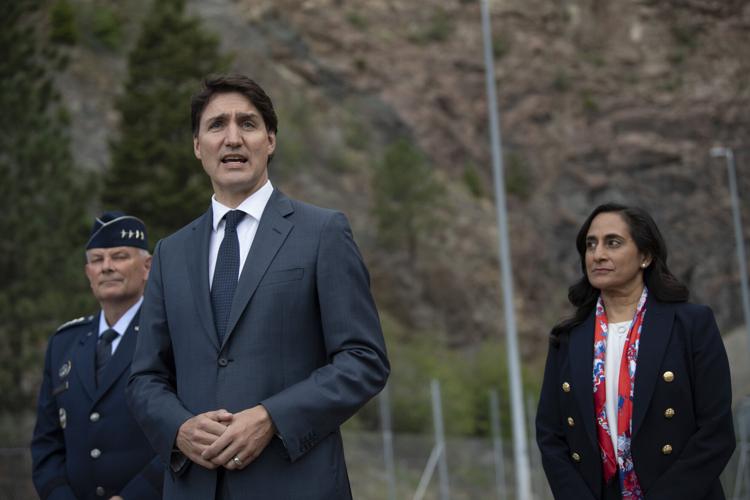 Canada’s affable Prime Minister Justin Trudeau rubbed elbows with top military brass at Peterson Space Force Base in Colorado Springs Tuesday and got down to business when the entourage traveled to Cheyenne Mountain Space Force Station in the late afternoon.

At NORAD, the joint United States and Canadian North American Aerospace Defense Command buried deep in the mountainside, the table was laden with talk of modernizing the center’s military warning and control systems.

“We’re seeing a time where the world is shifting rapidly, whether it’s new threats or new technology, and it’s important to work closely together,” Trudeau said to media after he toured the Cheyenne Mountain operation, built to withstand invasive attacks.

Canada and the U.S. struck an agreement to establish NORAD in 1958 and in 2006 renewed the deal, adding maritime warning to its mission of aerospace warning and control.

NORAD is now headquartered at Peterson Space Force Base, along with U.S. Northern Command, which was established in 2002 to focus on homeland defense following the Sept. 11, 2001, terrorist attacks.

As part of its function, NORAD tracks any missile launches around the globe, including in the Russian war in Ukraine, which began Feb. 24 and has no imminent end in sight. NORAD provides warning of ballistic missiles that threaten North America, and Northern Command can intercept such weapons, a senior NORAD defense official said.

NORAD remains unique in the world and vitally necessary to protect Canada and the U.S., Trudeau said.

“It’s the only place where two countries come together under a joint committee to protect our territories,” he said, after meeting with NORAD and U.S. Northern Command officials.

The last Canadian prime minister to visit NORAD was Pierre Trudeau, Justin Trudeau’s father, who came in 1977, according to the Canadian government.

Since taking over in August 2020 as NORAD’s top leader, VanHerck has emphasized enhancing domain awareness and developing software sharing and other joint efforts to deter threats, the senior NORAD defense official said.

Discussions at NORAD focused on shared priorities for continental defense and modernizing systems, Anand said in addressing media at the entrance to the Cheyenne station on the westside of Colorado Springs.

Under a 2021 agreement between the U.S. and Canada, issues that are being studied and improved include surveillance, domain, situational awareness, threats, command and control, and research and development, she said.

“The role of NORAD and our role in defense is to ensure the safety and security of our citizens,” Anand said.

That includes a new generation of hypersonic missiles being developed that pose a more challenging threat because they travel at high speeds and low altitude, can maneuver throughout flight and potentially can carry nuclear warheads.

Canada plans to build a new over-the-horizon radar system in the Arctic for long-range aerospace surveillance to detect such threats, which would become operational in 2028, government leaders have said.

“We have a number of initiatives on the table right now with the United States,” Anand said, “and will come out shortly with a plan to modernize.”

The trip is a big deal, said Ann-Clara Vaillancourt, lead spokesperson for the prime minister’s office.

“We’ve had a very friendly and strong relationship with NORAD since the alliance started,” she said.

“In the past two years, it’s been important to strengthen the relationship with the innovations and the equipment to carry us forward.”

Analysts have said that is short of its NATO commitment. The amount represents 1.5% of the country’s gross domestic product, while the agreement calls for spending 2% of GDP.

Pomp and circumstance of Trudeau’s stopover included an Honors Ceremony at the headquarters of NORAD and Northern Command at Peterson Space Force Base, in which soldiers, sailors, marines and airmen lined up to greet the Canadian dignitaries with music and a formal welcome.

Defense Secretary Austin met with groups of local service members at Peterson, NORAD and Northern Command, telling them not everyone can do their job and commending their “sacrifice, energy and commitment they exhibit.”

“When you deploy to Romania, Georgia or Poland, you are the example of what we’re all about,” he said at Peterson Space Force Base.

Trudeau is en route to Los Angeles to participate in the ninth Summit of the Americas, which President Joe Biden is hosting to discuss priorities such as climate change, gender equality, Indigenous rights and the war in Ukraine.

Colorado veteran gets second chance thanks to breakthrough IT training program

Quasey Vinson gave his kindergartner a taste of a faraway place. “Could you possibly mix pineapple juice with apple juice?” he asked the waitress.