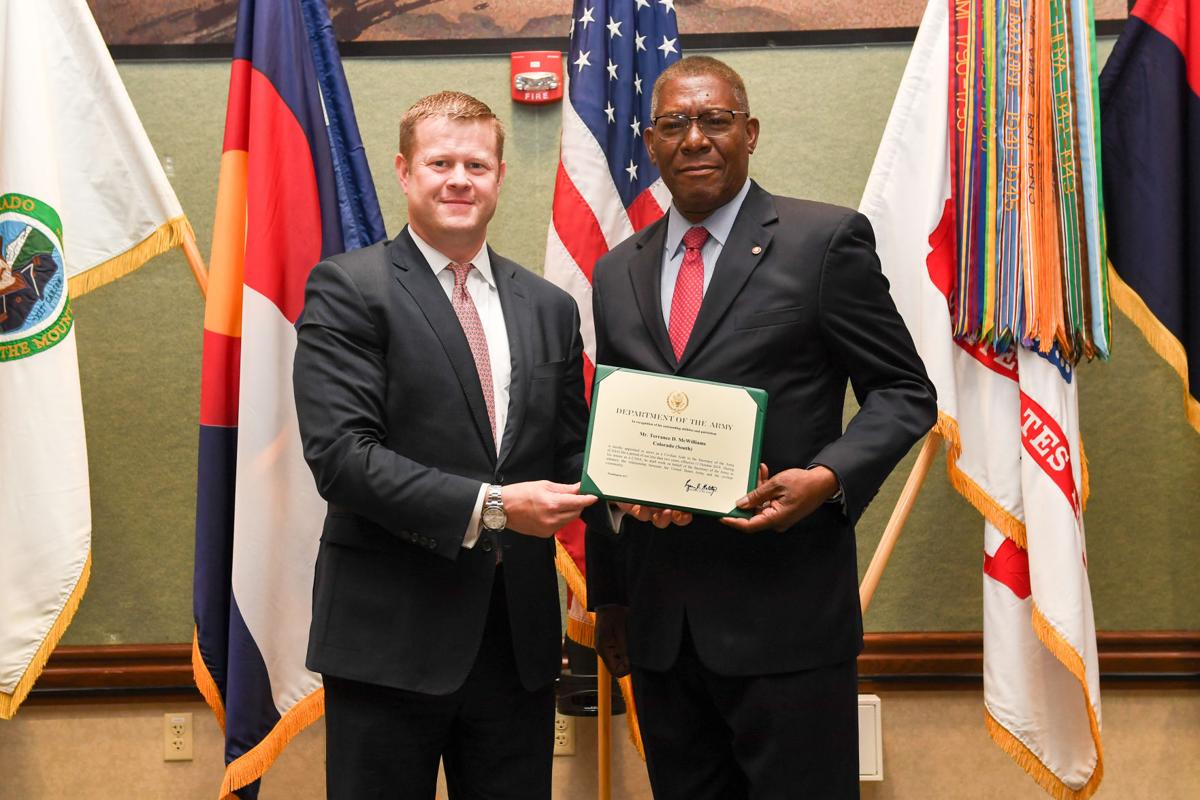 Secretary of the Army Ryan McCarthy presents a certificate to Terrance McWilliams,

who is representing Colorado as his civilian aide. 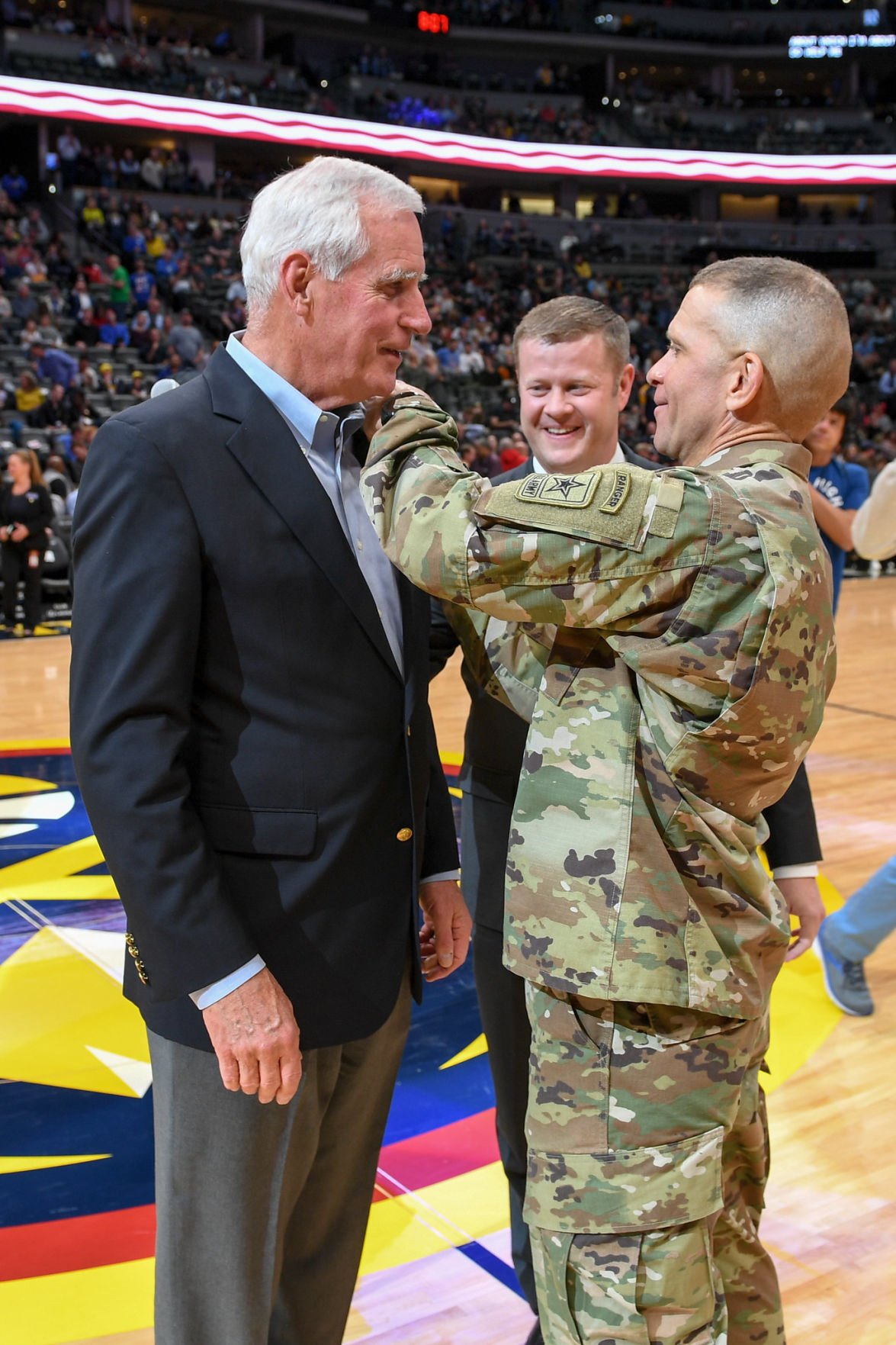 Pete Coors as a civilian aide

at the Pepsi Center in Denver

Secretary of the Army Ryan McCarthy presents a certificate to Terrance McWilliams,

who is representing Colorado as his civilian aide.

Pete Coors as a civilian aide

at the Pepsi Center in Denver

The Army’s top civilian leader picked a pair of Colorado residents to be his civilian aides this month, making a command sergeant major and a beer baron his top advisers on issues in the state.

From Denver comes Pete Coors, a one-time Senate candidate and scion of the family that founded Coors Brewing in Golden.

“It is my distinct privilege to welcome Peter and Terrance to the program,” Army Secretary Ryan McCarthy said in an email. “Both are true influencers in the state of Colorado who will make immediate impacts for the Army and our soldiers from day one.”

McWilliams served as Fort Carson’s top enlisted soldier from 2002-07, the early years of the wars in Afghanistan and Iraq. In uniform, he was a tireless advocate for troops, pushing quality-of-life initiatives and ensuring that the families of deployed soldiers got the help they needed.

He learned to care for troops over a 30-year Army career that included service in the 1991 Persian Gulf war with the 3rd Armored Cavalry Regiment. He took that dedication into civilian life.

McWilliams traded in his uniform for a suit and tie as the top military advocate for the El Pomar Foundation. At that charity, McWilliams helps direct money to programs for troops and their families.

McWilliams was sworn into his new post by McCarthy during a ceremony at Fort Carson.

“I’m extremely honored to be selected as a civilian aide to the secretary of the Army for Colorado, and humbled to once again work alongside the great men and women of the U.S. Army,” McWilliams said.

Coors, who joined the family business after earning a master’s degree from the University of Denver in 1970, helped grow the family beer brand into a national powerhouse and guided the company through its merger with Molson.

He was sworn in by McCarthy at Denver’s Pepsi Center.

Coors is chairman of the board of the combined Molson Coors Brewing.

But Coors has always been about more than beer. He is known for his charitable work in Denver, including leadership in the Denver affiliate of Boy Scouts of America.

“Service has always been important to my family, whether it is service to our country or within the community,” Coors said in a statement. “I have a special passion for soldiers and veterans, and am grateful the secretary has afforded me the opportunity to serve.”

McCarthy hopes Coors and McWilliams can help the Army solve one of its most vexing problems.

Amid a booming economy, the service is having an increasingly tough time attracting soldiers to fill its ranks. The Army fell well short of its 2018 recruiting goals and was only narrowly meeting its downsized goal for 2019.

Civilian aides, McCarthy said, “are a valuable asset in the community and help make a difference by moving the recruiting needle.”

That means McCarthy wants Coors and McWilliams to make a pitch to civic and community groups to get more people to push kids toward military service.

Getting youths into uniform isn’t easy in Colorado these days.

First, Army standards barring those who are overweight, undereducated or have a criminal record mean that less than a third of Colorado kids can make the cut.

Second, unemployment in Colorado is running near 3%, meaning civilian employers are clamoring for kids who might otherwise wind up in the military.

And with the state’s minimum wage at $11.10 per hour, flipping burgers might seem like an attractive alternative to sleeping in a tent in Afghanistan.

The Army, though, is unwilling to lower its recruiting standards to fill out rosters.

“The Army is open for business and we’re looking for the best of the best,” McCarthy said.

​Senior cadet Jayden Glover already has her name on a pile of awards at the Air Force Academy for her prowess in the pool with the women's swimming team. But she's added one more in an entirely different venue: a patent application that could revolutionize how the military builds rockets.