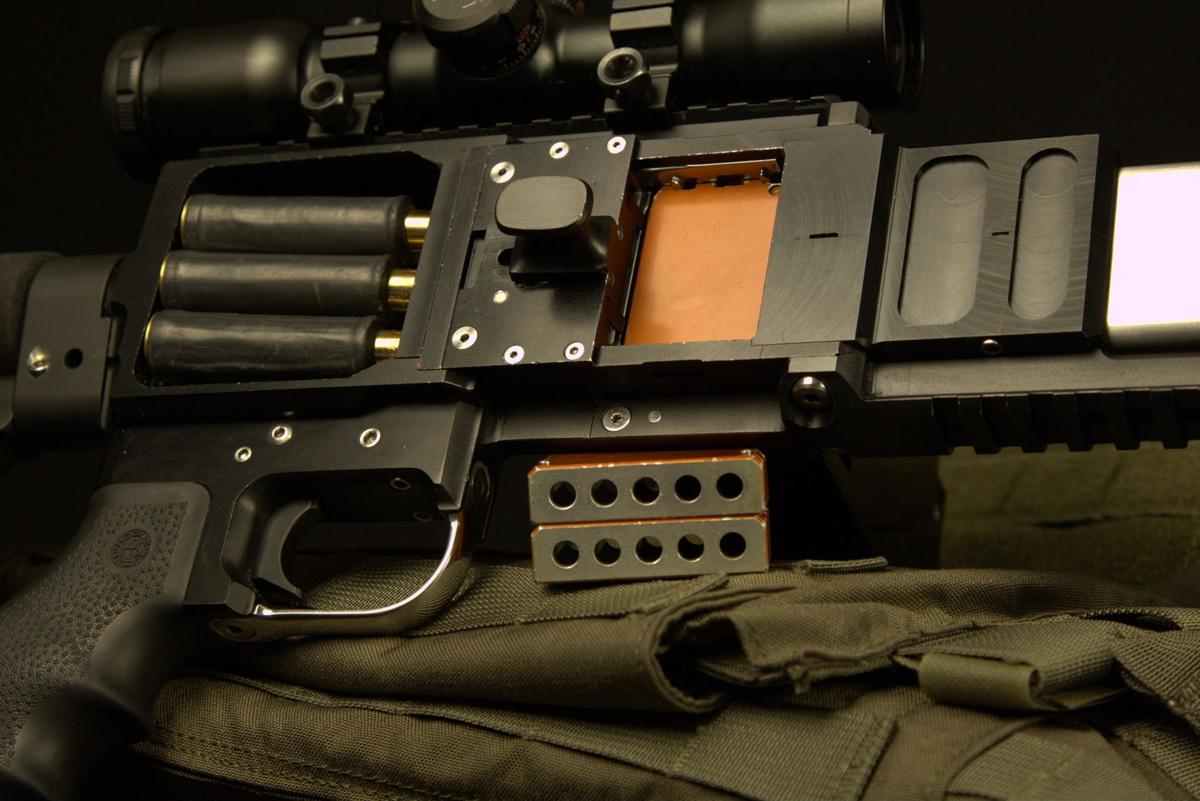 The “ribbon gun” can fire multiple rounds at once. 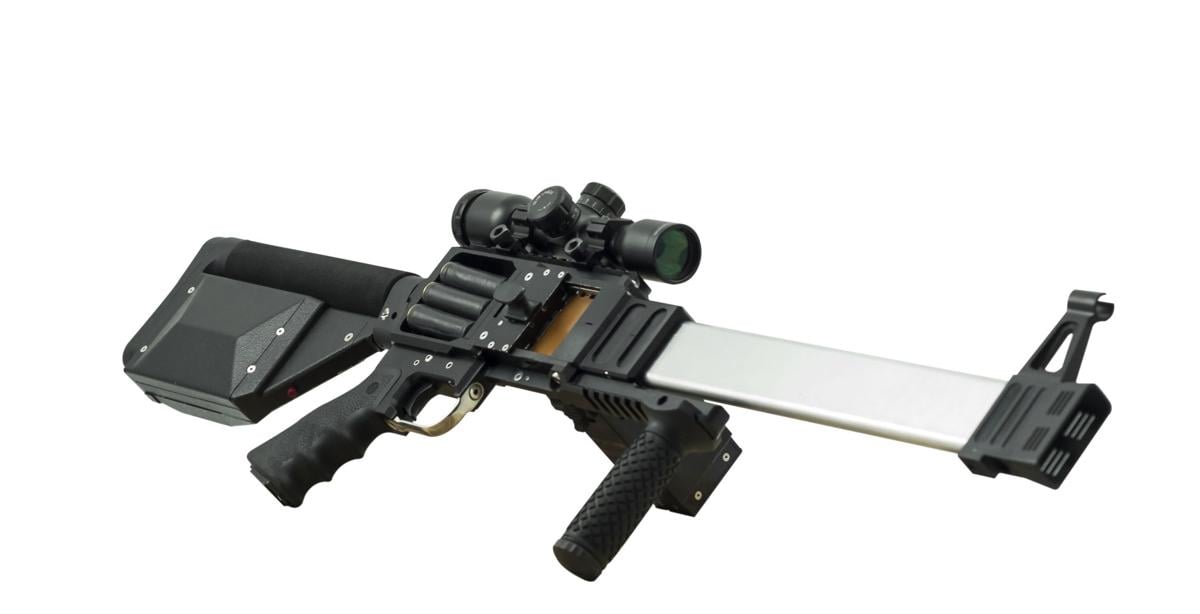 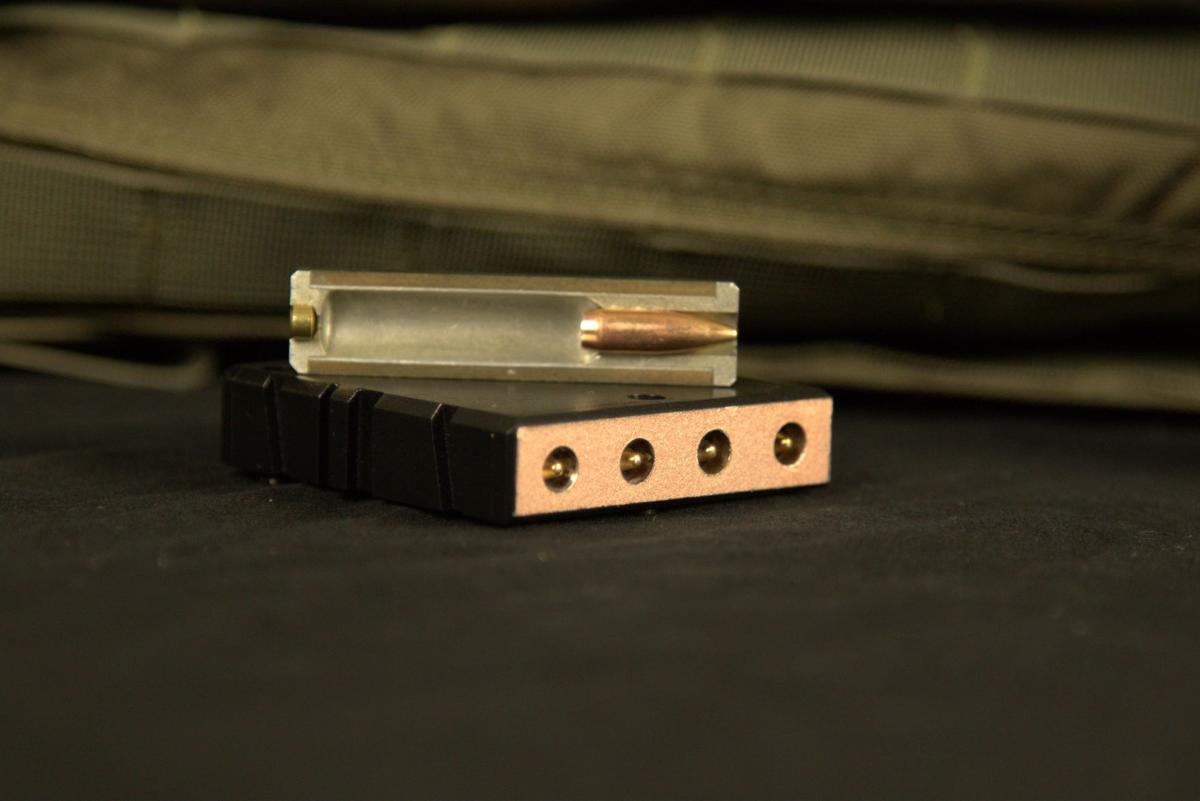 The “ribbon gun” includes a new style of ammunition with bullets encased in a four-round block rather than individual casings. (FD Munitions)

The Army adopted its battle rifle in 1963 and has spent 55 years looking for a replacement for the M-16 and its variants.

They might have found it in Martin Grier’s Colorado Springs garage. Grier, a self-described inventor who has worked at a local bed and breakfast, built the new “ribbon gun” with a hobbyist’s tools. It looks like a space-age toy drawn by a fifth-grader.

But goofy origins and cartoon-looks aside, this could be the gun of the future. The Army is studying Grier’s gun and has ordered a military-grade prototype.

- MORE MILITARY COVERAGE: Headlines and analysis from around the Pikes Peak region and beyond.

The specifications are incredible, four 6 mm barrels cut side by side within one steel block. New ammunition blocks fired by electromagnetic actuators that could theoretically give the weapon a firing rate of 250 rounds per second.

And then there’s the feature no soldier would turn down. “It’s called a power shot,” Grier said.

That’s the shotgun feature of this sniper-shot, machine-assault gun that can send four bullets simultaneously whizzing toward an enemy at more than 2,500 mph.

It isn’t science fiction. He’s built the gun and patented the technology behind it. Now his garage-based company, FD munitions, is hoping the Army will buy it.

“A multibore firearm, with several bores within a single barrel, could potentially exhibit many of the advantages of a multibarrel design, while reducing the size, weight and complexity disadvantages,” Grier wrote in his 2016 patent application.

He got the idea in the 1990s after a day of shooting a .22-caliber rifle with his kids.

Modern weapons aren’t that far removed from the ones used by George Washington’s army, Grier says. They use a mechanical firing mechanism that’s prone to failure. And from muskets to the AK-47, they fire one bullet at a time.

“What if a rifle could fire more than one bullet at a time and be tied to the tools of the electronic age?” he wondered.

His first invention changed the ammunition. Rather than a single shell casing, his bullets are encapsulated in blocks.

In a block with four rounds, each round is aligned with a barrel. Grier prefers to call them “bores,” because all of the barrels are in a single piece of metal.

The second invention is behind the bullet. In other rifles, the trigger is connected to a mechanical trigger pin, which fires the gunpowder and sends the bullet flying.

In his weapon, the trigger is an electronic switch that sends a signal to an electromagnetic actuator behind the block of bullets. The four bullets in the block of rounds each has its actuator. That means you fire the rounds individually or simultaneously.

Selecting the “power shot” option fires all four bullets at once.

Getting this to work requires a new kind of machining to get the four rifle bores lined up. In a traditional weapon, this is accomplished with technology that would be familiar to 19th-century blacksmiths — a drill.

With Grier’s gun, the barrels are cut by electricity that runs between a pair of electrodes through a thin wire. The high-tech method offers an incredible degree of precision thanks to computer control.

The first rifle, which weighs about 6½ pounds, slightly less than the M-16, hasn’t been cheap. Grier has poured more than $500,000 of his savings and investment by others into the working prototype.

But by having a functioning weapon, he has drawn a lot of attention.

Grier has been asked to create a prototype to Army specifications for testing. The Army will run the rifle through its paces to determine if his idea is worthy of the battlefield.

Grier said he finds motivation for the weapon in every attack on U.S. troops overseas. While the U.S. owns the skies and has satellites and missiles that are beyond compare, American troops have few advantages in a stand-up rifle fight.

“Our guys have the same junk weapons as our adversaries,” he said.

But Grier’s ribbon gun, which can work even if one of the four barrels fails, will change that, he said.

“I want to give them a Clint Eastwood kind of edge.”

Getting the weapon in the hands of troops could take years. The Army’s requirements are backed by grueling tests.

The last rifle that was seen as a possible replacement for the M-16 family of guns was tested for six years before the program was canceled in 2008.

The Army found that the XM-8, despite its high-tech looks, offered few advantages over the weapons troops have carried since Vietnam.

Grier is convinced that his weapon is so revolutionary that it will overcome Army foot-dragging.

“This is the future,” he said.

And he’s not apologizing for the rifle’s humble origins in a Colorado Springs garage.

“All the best stuff comes out of somebody’s garage,” he said.

A Fort Carson brigade will go from shoe leather to wheels in a shift that will add about 200 soldiers to the post.