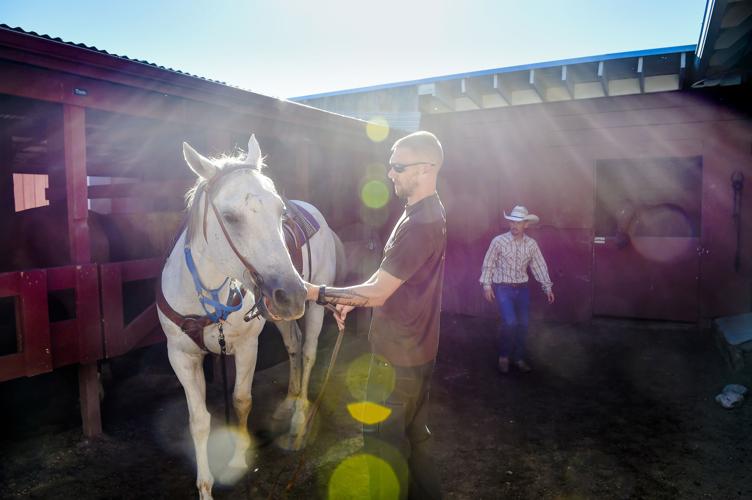 Air Force TSgt. Scott Nicholson, left, readies his horse for a ride during a therapy program with the Wounded Warrior Project at the Air Force Academy Thursday, July 23, 2015. Michael Ciaglo, The Gazette 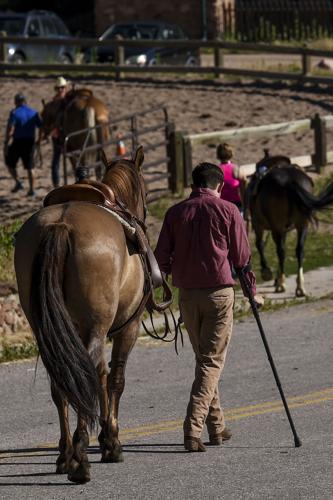 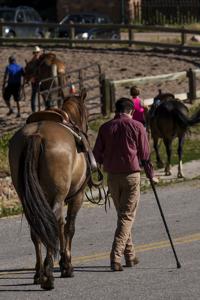 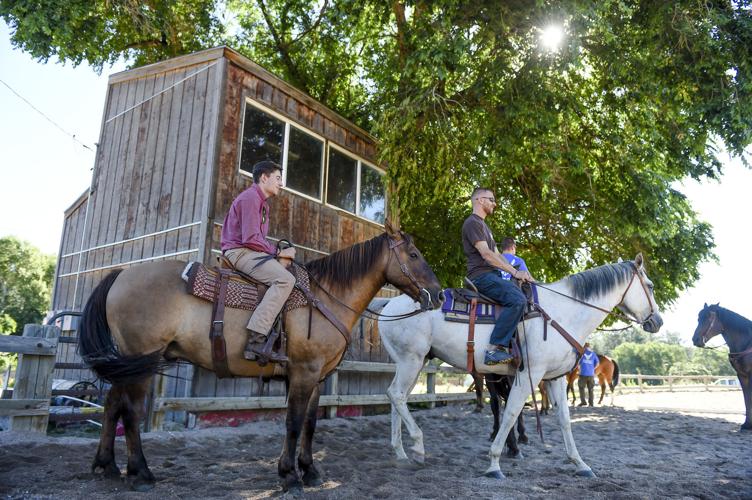 Riders with the Wounded Warrior Project prepare to head out on a therapy ride with horses at the Air Force Academy Thursday, July 23, 2015. Michael Ciaglo, The Gazette

Air Force TSgt. Scott Nicholson, left, readies his horse for a ride during a therapy program with the Wounded Warrior Project at the Air Force Academy Thursday, July 23, 2015. Michael Ciaglo, The Gazette

Riders with the Wounded Warrior Project prepare to head out on a therapy ride with horses at the Air Force Academy Thursday, July 23, 2015. Michael Ciaglo, The Gazette

Wounded, injured and ill airmen sat tall in the saddle last week as they rode through an Air Force Academy program designed to give them a key healing ingredient.

The San Antonio-based Air Force Wounded Warrior Project sent 40 airmen and retirees in need of that confidence to Colorado Springs for a week of riding at the academy's equestrian center, where four-legged therapists helped them trot through their troubles.

The center has worked with wounded troops for years. The center's director, Billy Jack Barrett, said there's something about a horse that gives troops perspective. They learn what they're capable of doing despite their injuries.

That healing power is what drew the Air Force's program for wounded troops, which runs the camps for the airmen and covers expenses, to pick the academy for its annual summer camp.

"We know the equestrian center has success," said Shawn Sprayberry, spokesman for the program that falls under the Air Force Personnel Center.

Retired Staff Sgt. Travis Johnson didn't think he could canter or gallop before he traveled to the academy for the camp. Back surgeries to mend his broken spinal bones has hobbled the former civil engineering airman.

But that pain fades quickly as horse and rider hit the trails.

"It takes your mind off everything," he said.

The mental part of healing is tougher than mending broken bones, Sprayberry said. Wounds heal, but troops still grieve for the lives and careers forever changed.

During the camps, he said, the wounded airmen test their limits and push each other to recover.

"We call it healing together," Sprayberry said.

Johnson said the wounded troops found kinship during the camp but didn't talk about their wound and limitations.

"We talked about how much we are progressing," he said.

With O'Neil at 6 feet 6, getting a horse for him was a tall order. The equestrian center put the security forces retiree atop a draft horse big enough to saddle his bulk.

The two giants showed a gentleness for each other, an obvious affection.

That hulking horse, O'Neil said, did something for his post-traumatic stress that doctors and drugs have not.

"It's breaking that barrier I have been up against for five years," he said.