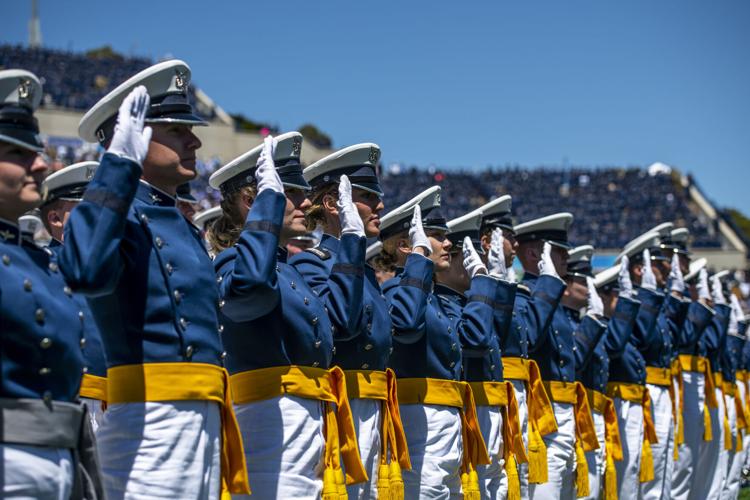 Cadets raise their right hands and take an oath during the U.S Air Force Academy graduation at Falcon Stadium on Wednesday, May 25. 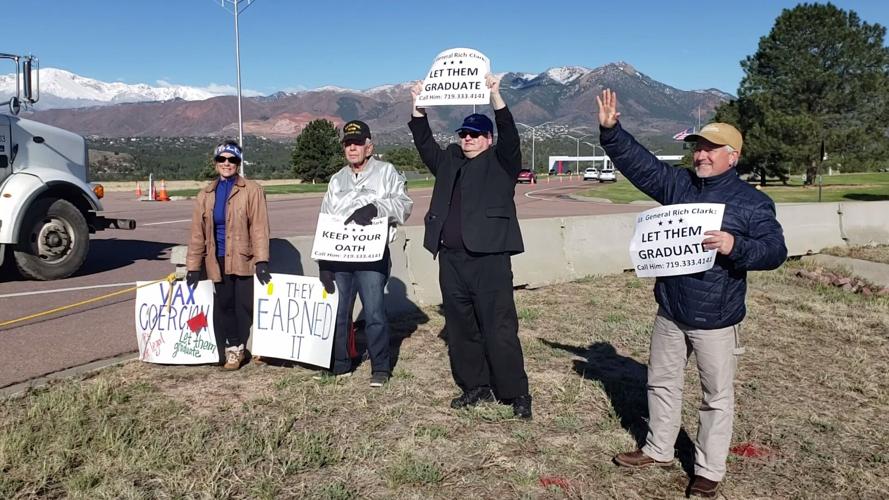 Protesters stationed along the road leading to the south entrance of the U.S. Air Force Academy on May 25 show support for senior cadets who refused COVID-19 vaccinations.

Several Air Force Academy cadets are named as plaintiffs in a lawsuit filed Wednesday in South Carolina that seeks a temporary restraining order and preliminary injunction against the Department of Defense's COVID-19 vaccine mandate.

The cadets face potential disenrollment, and some may be required to repay the cost of their education, the suit alleges. That cost could number in the hundreds of thousands, The Gazette previously reported. The cadets are among 24 plaintiffs listed in the suit that include active-duty service members and cadets from other military service academies.

One cadet listed as a plaintiff was one of a group of three cadets who did not receive the vaccine before graduation in May. Though the Air Force allowed the cadets to graduate on condition that they will receive the vaccine within a specified time, they did not receive their commissions and were not allowed on the field at Falcon Stadium for the graduation ceremony itself, according to officials with the Air Force.

The lawsuit alleges that plaintiff has been placed "into no-pay post-graduation status." Furthermore, the suit says the cadet had to postpone his wedding, because cadets at service academies cannot get married.

John Michels of the Federal Practice Group, one of the attorneys for the plaintiffs, cites 1107a of the United States code and 6200.02 of Department of Defense instructions to argue that the COVID-19 vaccine cannot be administered involuntarily to military personnel without their informed consent because it is under emergency use authorization from the Food and Drug Administration and is not fully licensed by the administration.

President Joe Biden has the authority to issue a blanket waiver that would deny service members the right to informed consent but he has not done so, Michels said.

Michels said he saw parallels between this case and one he was counsel to in 2004 when the anthrax vaccine was similarly mandated. He contended then that under federal law and Department of Defense instruction, the vaccine could not be administered without informed consent. District Judge Emmet Sullivan imposed a permanent injunction on the mandate in October 2004.

The lawsuit also contends that despite religious freedom protections in the U.S. Constitution and the Religious Freedom Restoration Act of 1993, hardly any religious exemptions have been approved.

The lawsuit alleges that the Air Force has received 13,376 requests and subsequent appeals for religious accommodations and has only approved 118.

Air Force Academy officials issued the following statement when asked about the lawsuit:

"The U.S. Air Force Academy is unable to comment on ongoing litigation."

Editor's Note: This story has been updated to clarify statements on approval of Air Force Academy religious accommodation requests and senior …