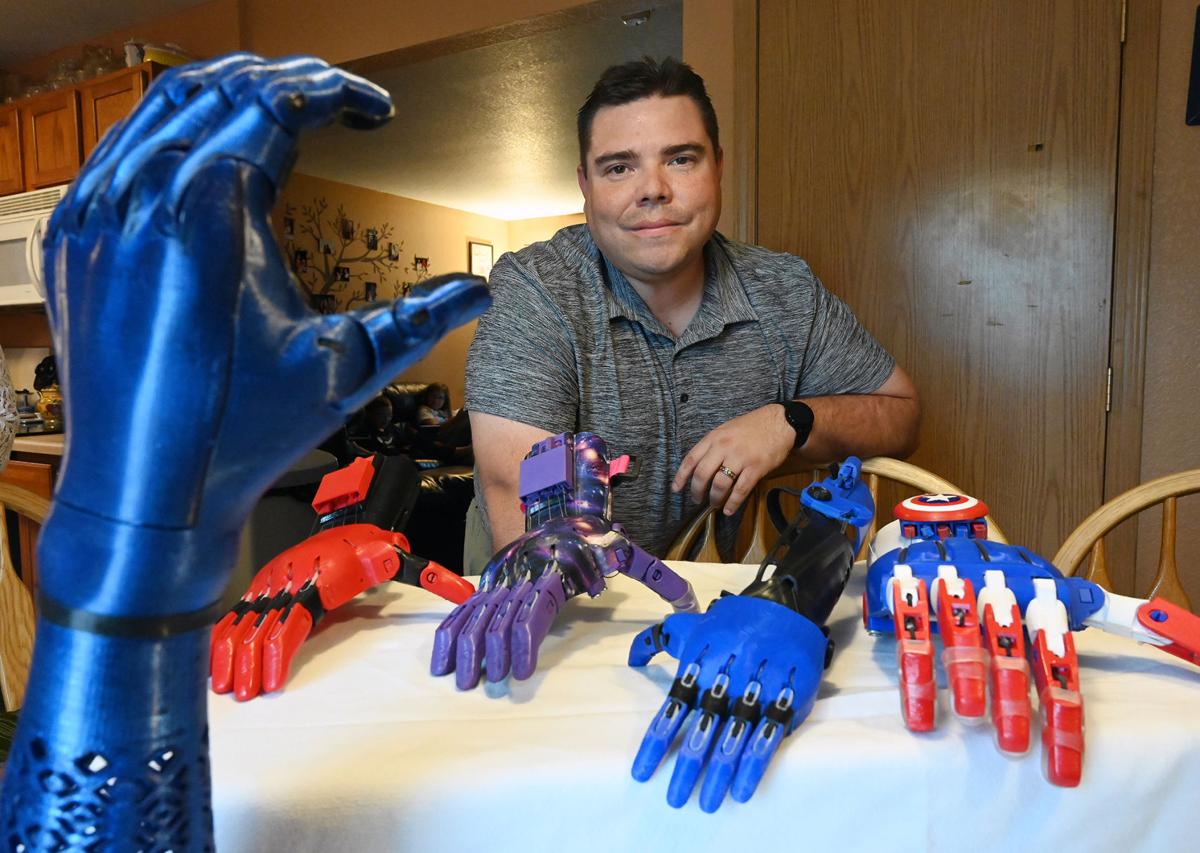 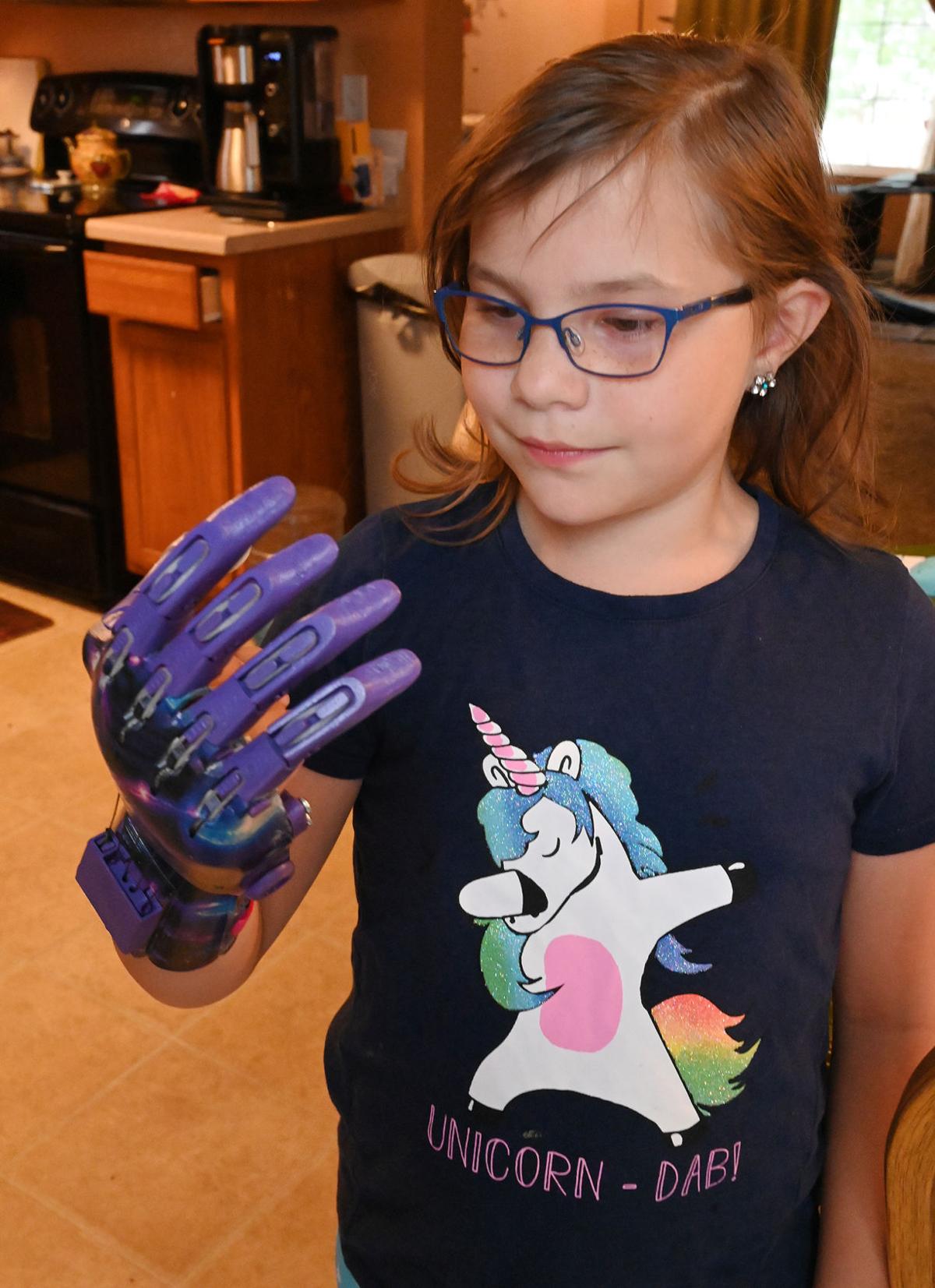 Veteran Dakota Welch's ministry, Creation Station, provides free 3D prosthetic hands to children who need them. His daughter Lizzie models one of the hands that he made. 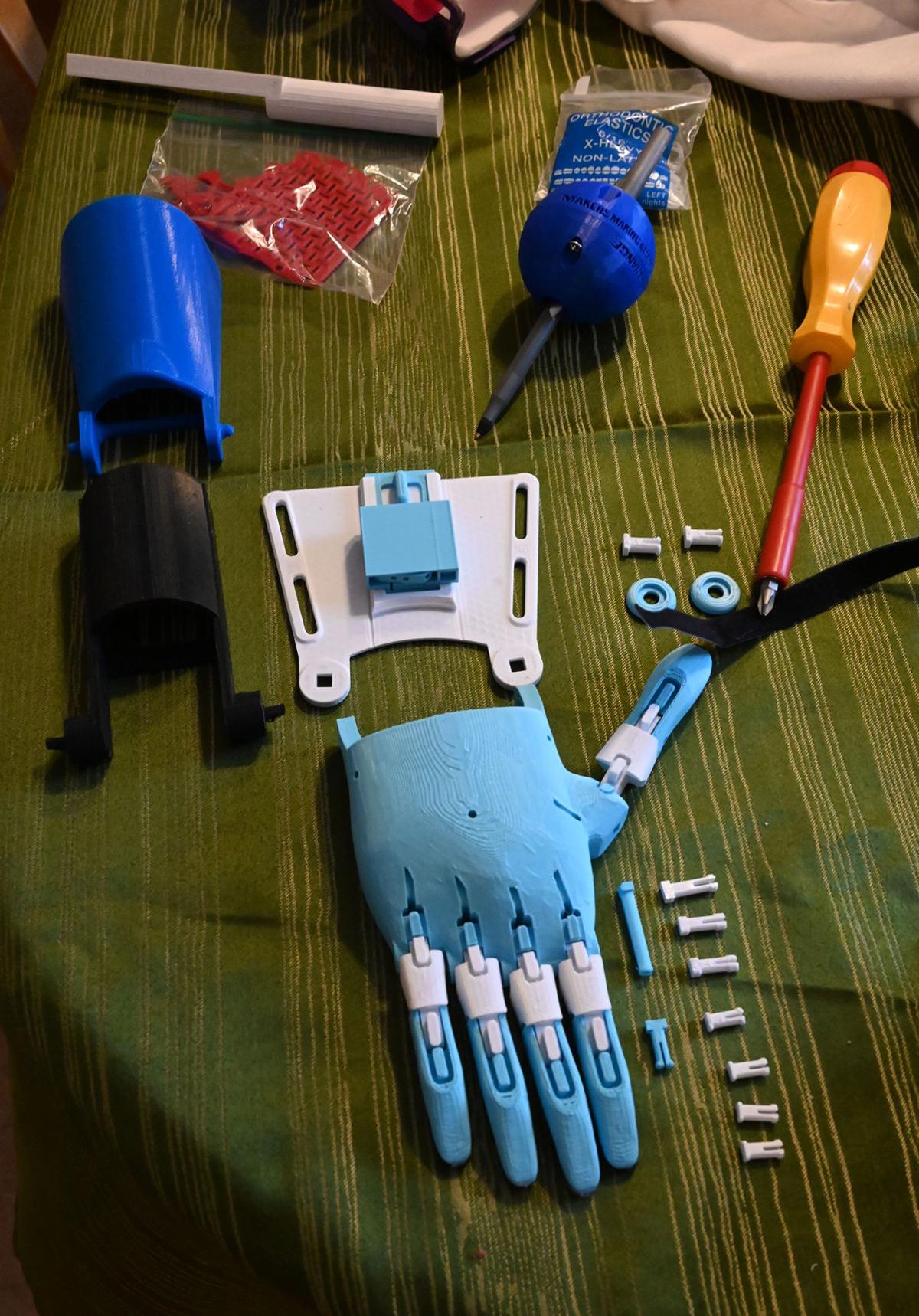 Veteran Dakota Welch's ministry, Creation Station, provides free 3D prosthetic hands to children who need them. Welch has been working on this hand for a little girl in Kansas.

Veteran Dakota Welch's ministry, Creation Station, provides free 3D prosthetic hands to children who need them. His daughter Lizzie models one of the hands that he made.

Veteran Dakota Welch's ministry, Creation Station, provides free 3D prosthetic hands to children who need them. Welch has been working on this hand for a little girl in Kansas.

Charities are known for giving hand-outs, and hands-up, to those in need. Dakota Welch's simply gives hands.

To those born without hands, or who lost them because of an accident, there are few greater gifts.

"Tommy got to grab a toy for the first time using his new prosthetic hand," said Welch, who operates the faith-based nonprofit Creation Station with his wife, Mandy, out of his Colorado Springs home. "Mom was overfilled with joy. There were tears."

Creation Station is part of a global network of "digital humanitarians" who use open-source code and 3D printing equipment to create functional prosthetics.

In the case of Creation Station, the recipients are usually children because veterans are usually able to obtain what they need through the Veterans Administration, said Welch, an Army veteran and member of Calvary Fellowship Fountain Valley.

The nonprofit started two years ago, growing out of his burgeoning interest in 3D printing and desire to do good.

The normal cost of a non-functioning prosthetic arm is upwards of $10,000 — $50,000 for a functioning one, and $100,000 or more for a robotic arm, Welch said, adding that insurance companies are often hesitant to pay for fully functional prosthetics.

"The options for a mom and dad are pretty slim, especially to spend $10,000 just like that on something they'll outgrow in a year or two," he said.

Instead of facing that kind of expense, parents seeking a prosthetic limb for their child can submit their request to E-NABLE, where volunteers like Welch apply to help. Parents are allowed to pick their volunteer.

If they choose Welch, they'll find themselves matched with someone who does his best to create a limb that fits a child's personality.

"I've printed out themed prosthetics — Iron Man, even a Paw Patrol-themed one for a kid in California," he said.

The cost to Creation Station? An average of just under $300 per functional limb and about 25 hours of time.

The limbs not only allow the children to more easily navigate the world, but to better fit in with their peers, Welch said, adding he sees spikes in requests right before back-to-school and ahead of Christmas.

"Bullying is a huge thing that pretty much all parents I've talked to have shared," he said of those he's worked with. "Kids really want to have some kind of normalcy in their life. Obviously this is not a God-given limb they could be born with, but this will help them cope and to be accepted by other kids.

"Now they can do high-fives, first-bumps, write their name."

Welch's next goal is to produce a working 3D robotic arm for a child in need. He's also working with the Colorado School of Mines in Golden to have weight-bearing leg prosthetics produced at no cost to families — a time-consuming project Welch, a working father, said he can't tackle alone.

He also used his 3D printer to produce about 150 visors that hold protective shields for first responders during the coronavirus pandemic. He's open to making more if the need arises.

He and his wife have a lot on their plate, between work, parenting and running their charity, but "we're trying not to stress about it," he said.

"For the most part, it's been faith all around, giving it up to the good Lord and laying it at his feet," Welch said.

Those wishing to learn more about Creation Station and/or contribute can visit creationstation3d.com.

The script was flipped, in her estimation.