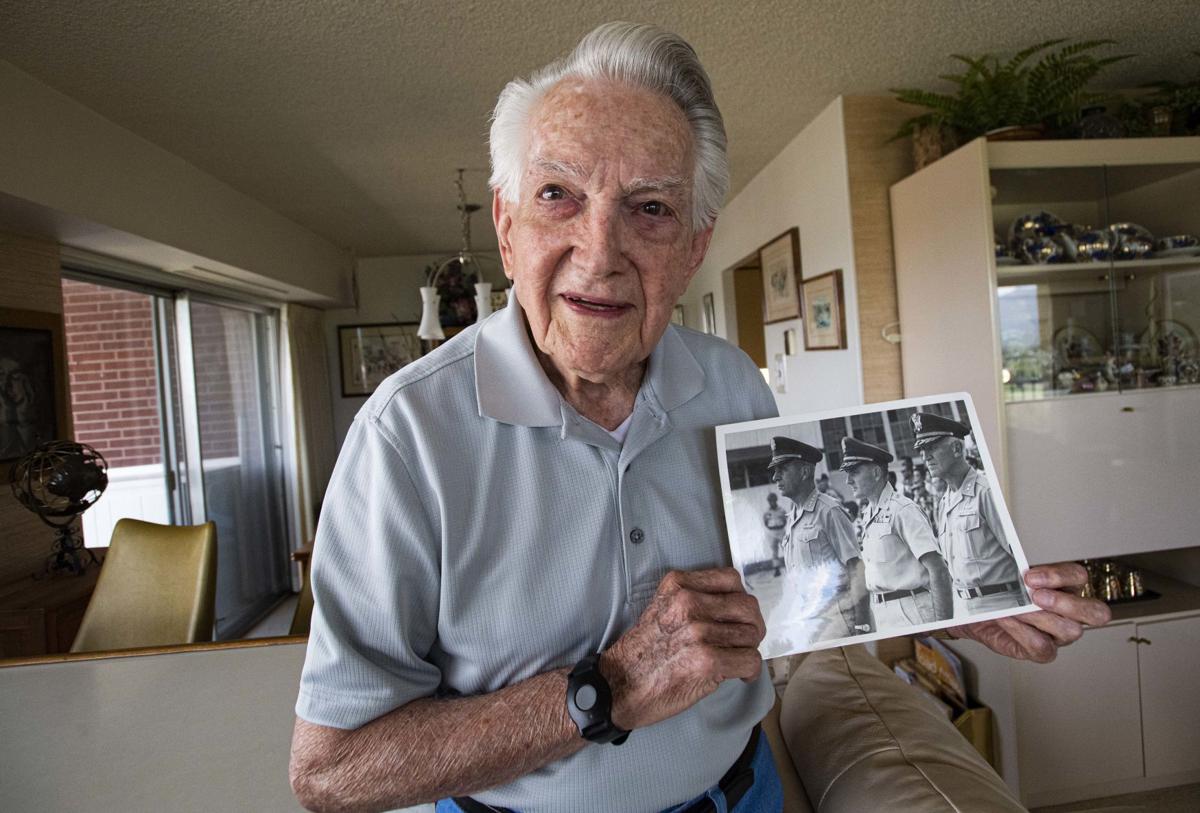 Phil Allman, 97, hold a picture of himself, center, in 1969 during the Vietnam War. Allman served in the Navy during World War II, the Korean War and Vietnam War before retiring in 1969. Allman, pictured Thursday, July 9, 2020, now lives in Colorado Springs. (The Gazette, Christian Murdock) 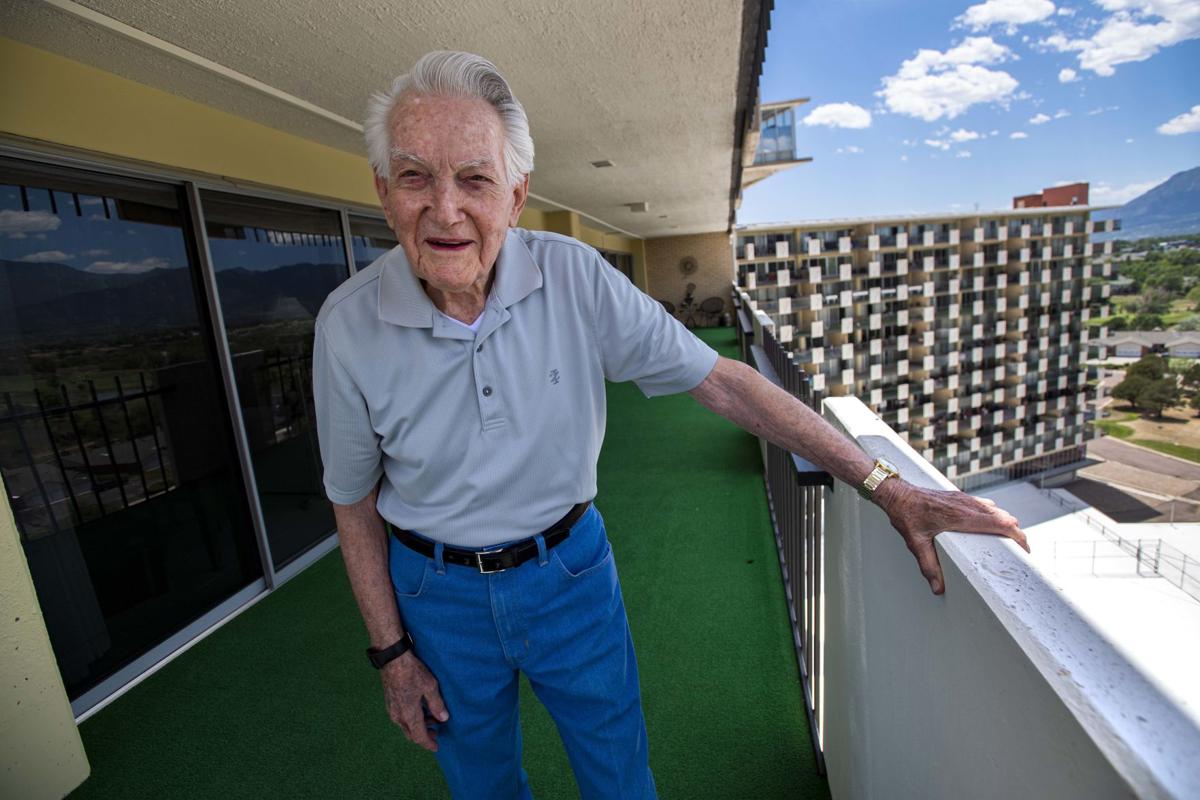 Phil Allman, 97, pictured on the balcony of Colorado Springs condo, enlisted in the U.S. Navy after high school in 1942 and served until 1969 through World War II, and the Korean and Vietnam wars. He was on the light aircraft carrier U.S.S. Cabot during World War II. (The Gazette, Christian Murdock)

Phil Allman, 97, hold a picture of himself, center, in 1969 during the Vietnam War. Allman served in the Navy during World War II, the Korean War and Vietnam War before retiring in 1969. Allman, pictured Thursday, July 9, 2020, now lives in Colorado Springs. (The Gazette, Christian Murdock)

Phil Allman, 97, pictured on the balcony of Colorado Springs condo, enlisted in the U.S. Navy after high school in 1942 and served until 1969 through World War II, and the Korean and Vietnam wars. He was on the light aircraft carrier U.S.S. Cabot during World War II. (The Gazette, Christian Murdock)

When Phillip Allman, Jr., graduated high school in 1941, he had his sights set on two things.

The Birmingham, Ala., native wanted to become a pilot. And his country, at war, needed them.

"The first thing I did was went to recruiting for Naval Air," the 97-year-old Colorado Springs resident, a retired lieutenant colonel and college professor, recalls.

He was accepted as a naval aviation cadet, but it wasn't to be.

"I got airsick too often, and they figured I was not set to board a plane," he said. "I washed out."

Instead, Allman was chosen to work in aviation ordinance, arming planes. He was assigned to the USS Cabot and would spend nearly two years on the ship, eventually reaching Japan, where his ship would make "major strikes" on all islands.

The Independence-class light aircraft carrier would set a record for the longest sustained operations in the Pacific, and its planes would become some of the first to drop napalm bombs.

The ship's 21 months at sea were not smooth sailing, literally or figuratively.

Among his most harrowing moments: kamikaze attacks and typhoons.

"We were hit by kamikazes, right next to the station where I was on the ship. That annihilated part of the port side," he said, adding that many crew members were lost.

The typhoons had the potential to be just as deadly. He recalls one in particular that took out every plane on the flight deck and damaged most on the hangar deck.

"These typhoons were so terrific — they were just back and back, and up and up," he said. "Most people — even old salts, so called — they were sick."

The queasiness that disqualified Allman from service as a pilot posed a problem at sea, as well — he became so ill that his weight dropped to under 100 pounds. But, he says, "I broke out of it."

The Cabot eventually needed repairs. Allman and the crew returned to the shipyards in San Francisco, in the spring of 1945. The Navy, preparing for the invasion of Japan, had engineered a new bomber — the PB4Y-2 — and was looking to train crew members.

The planes were "basically a different form of the B-24s, which the Army had for years — one of the best ones," Allman recalled.

He was sent to Norman, Okla., for technical training, and then to aerial gunnery school in Jacksonville, Fla., in preparation to serve on one of the new models.

"The Japanese, we knew, were going to fight to the very end," Allman said. "That was the situation at that time. Roosevelt died at the end of the war, and Truman took over. Harry said we're not going to see those terrific deaths of American forces.

"And then here's this big bomb that went off."

Allman got word that the war was over while training in Jacksonville, perhaps on the radio or through advance information. He can't quite recall.

But he'll never forget the energy of the moment, and its implications.

"It was just so much — people cheering, and thinking about, 'What am I going to do now? I can do things in my life.'

"It was just a fantastic feeling that after all this time, you're free again."

And he got his World War II love story, to boot.

He had met his future wife, Daisy, while in Oklahoma. When "the war was over on Aug. 15, 1945, I invited her to come to Jacksonville, and said, 'Let's get married.' No kidding.

The two were married a week later.

And he would claim what was his, using the GI Bill — penned into law by Roosevelt in 1944 — to complete a master's, then a doctoral degree — accomplishments that set him up to teach a variety of subjects, including environmental science and geography, at universities in multiple states.

"The greatest thing this nation has ever had is a GI Bill for veterans," Allman said.

His advice to young service members: "Put your heart and soul into it, and the biggest thing is stay with it, at least through your basics," he said, tears collecting in his eyes.

"Get the college qualification under the GI Bill. That's it. Get a good education, be a good American citizen."

Evelyn French had her sights set on becoming a teacher.