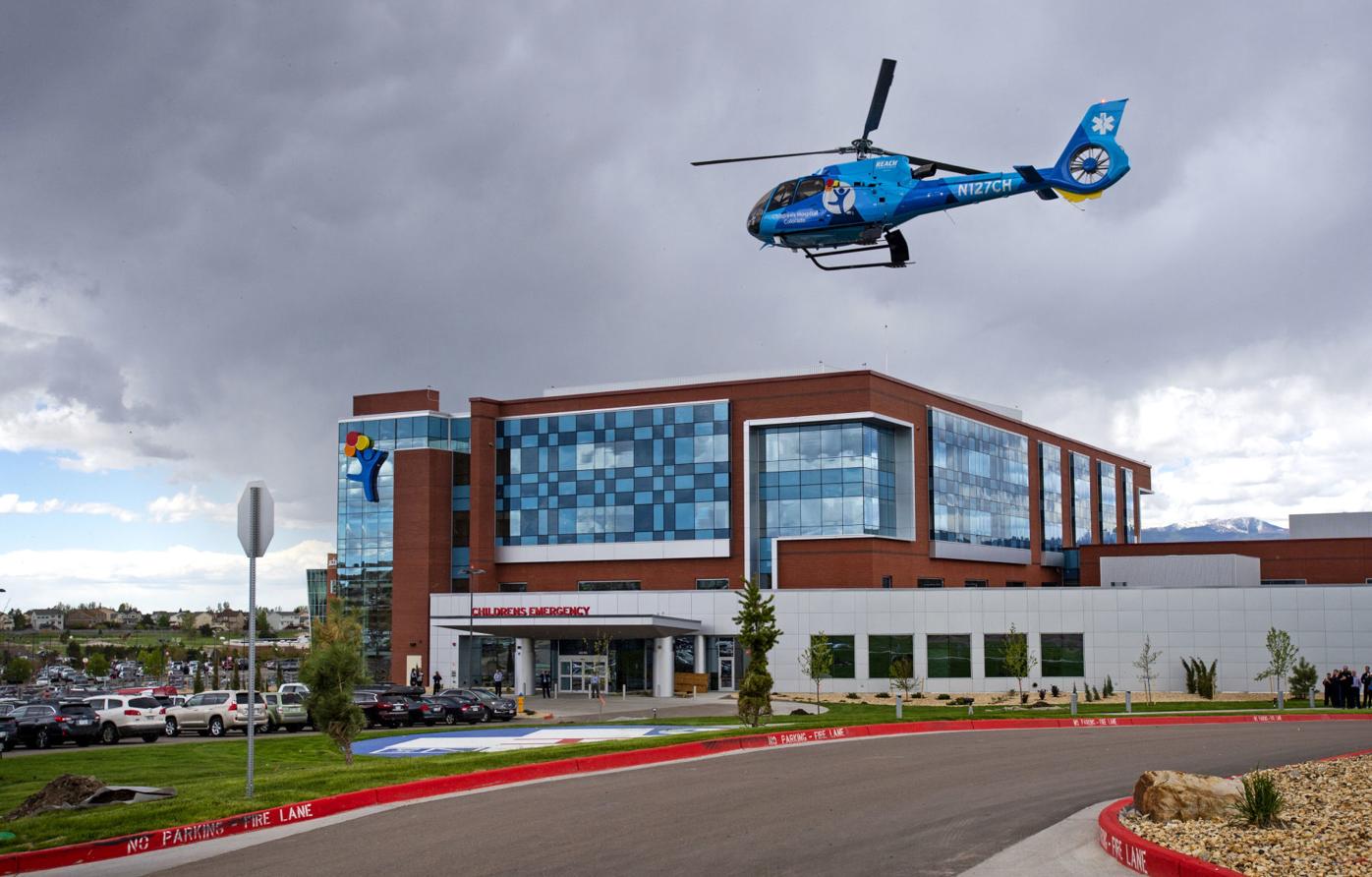 Children’s Hospital Colorado broke ground in 2019 on a clinic in the Briargate area that offered pediatric behavioral health care and other services. 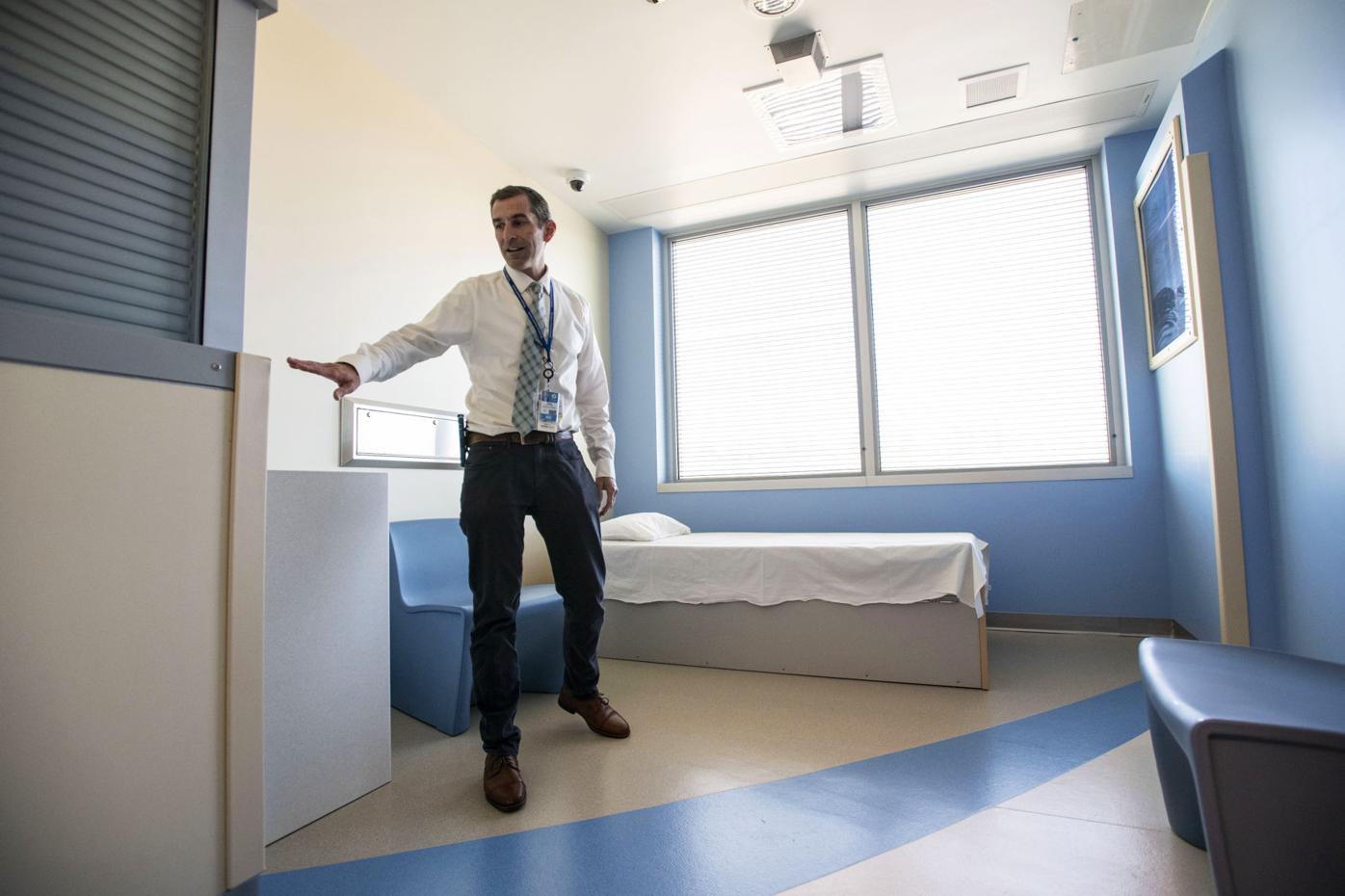 Dr. David Listman pointed out safety features in one of six exam rooms of the behavioral health unit during a tour of Children’s Hospital Colorado in Colorado Springs’ emergency department in 2019, when it opened.

Children’s Hospital Colorado broke ground in 2019 on a clinic in the Briargate area that offered pediatric behavioral health care and other services.

Dr. David Listman pointed out safety features in one of six exam rooms of the behavioral health unit during a tour of Children’s Hospital Colorado in Colorado Springs’ emergency department in 2019, when it opened.

Pediatric medical specialists expected to see a wave of children needing acute mental health care as the pandemic continued beyond what anyone imagined, and schools struggled to stay open.

But they didn’t necessarily think there would be a tsunami.

“While kids did fairly well initially in the pandemic, the cumulative stress of schools (closing or adopting a hybrid model) and not being able to do the things they normally do has sort of come to a head,” said Dr. Mike DiStefano, chief medical officer and emergency room physician for Children’s Hospital Colorado in Colorado Springs.

“To say that anyone predicted it to this degree — I don’t think anyone anticipated the volume we’re seeing now,” he said.

Across the Children’s Hospital Colorado system of 16 urgent, emergency and specialty locations, a record number of kids are coming to emergency departments for behavioral health needs, officials said.

Systemwide, there was a 72% increase in behavioral health emergency visits from January through April over the same time period in 2019. That includes a 90% increase in April 2021, compared with April 2019.

In fact, the situation has reached the level of a bona fide pediatric behavioral crisis, Raymond said, including in Colorado Springs.

“Since January, the community has turned up the dial, and there’s a palpable difference from a psychiatric perspective and the emergency department,” DiStefano said.

From January through April, Colorado Springs recorded a 145% increase for behavior health visits to the emergency department compared with the first four months of 2020. For the month of April, the local numbers tripled over 2020.

Because the hospital has not experienced a proportionate increase in medical cases, officials believe the huge spike in mental health cases is “all related to the social stressors kids are going through and the lack of accesses they’d normally have in school,” DiStefano said.

Many kids who arrive at the local Children’s emergency department with a behavioral health problem have either attempted suicide or are thinking about it, DiStefano said, while others display out-of-control or aggressive behavior. The latter is occurring more frequently, he added.

All are a danger to themselves or others, he said.

Most patients are from El Paso County, where teen deaths by suicide doubled in 2020, according to coroner’s office reports. The county has had the highest teen suicide rate in the state in recent years.

The hospital, which opened in 2019 in Briargate, does not have an in-patient psych ward but has six beds in the emergency department built specifically for behavioral health patients to be evaluated, stabilized and treated in the short-term.

Some are referred to in-patient stays in Colorado or out of state, depending on the availability of beds, Raymond said.

The current wait for in-patient placement ranges from days to months, Raymond said.

Beds for younger children, those 8 or 9 years old, are especially difficult to find, he said, as many community behavioral health providers don’t accommodate those ages.

But this year, the need has been steady and consistent, DeStefano said, instead of ebbing and flowing.

“For behavioral health, the system has been taxed,” he said. “The cycle of relief hasn’t been there lately.”

Children waiting for in-patient bed openings stay in the emergency behavioral health beds at the hospital because they aren’t safe to return home and need direct supervision and skilled care, DiStefano said.

When those beds for mental health patients fill up, traditional hospital beds for kids are prepared to accommodate behavioral health clients, he said.

The situation is challenging Raymond said, in terms of staffing as well as for the kids and their families.

But, “It’s happening at a more frequent clip,” DiStefano said.

Some children can get on a path to returning to their daily lives with outpatient therapy and soon will have another option in town.

The need for expansion became apparent soon after the system opened the new Children’s Hospital in Colorado Springs in 2019, Raymond said.

An outpatient pediatric behavior health program in Colorado Springs that was put on hold last year due to the pandemic relaunched in February as part of a new location for Children’s at 2375 Telstar Drive, Raymond said.

The emphasis on crisis response efforts, while important, have in part caused a revolving door of children with chronic mental illness continually being placed for brief stays in psychiatric hospitals without the ability to access aftercare or adequate preventive resources, Raymond said.

The 25,000-square-foot facility will break ground in the fall, Raymond said, and when completed, will provide a behavioral health program that will offer daytime treatment as well as partial inpatient hospitalization.

Children will be able to return home to sleep and be with their families while receiving daytime therapy, Raymond said.

The center also will provide physical and occupational therapy and treatment for children who have behavioral and physical issues associated with autism spectrum disorder.

The combination outpatient/inpatient program for mental health treatment is expected to help prevent situations from reaching crises, like a suicide attempt or physical altercation with family, Raymond said.

Toward the end of creating an integrated approach to children’s mental well-being, a resiliency program has expanded to five school districts in El Paso County and 11 schools.

The program teaches sixth graders on the cusp of entering their teen years and facing physical changes as they mature, online bullying, social stressors and academic pressures how to handle such challenges in healthy ways.

Behavioral health navigators and coaches work with students, and school-based nurses are trained to provide intervention, if necessary.

Preliminary data shows the idea is working, he said.

Once the hospital has validated that the model demonstrates its anticipated impact, the program will expand and be replicated, Raymond said.

A psychiatric nurse is another new addition to Children’s Hospital Colorado in Colorado Springs, to work with emergency department patients along with behavioral health counselors and specialists.

“We didn’t know how busy we’d be when we first opened,” DiStefano said. “Last year, we realized there’s a huge need, so we changed the care model to focus on a specialization, instead of a typical ER model.”

He expects the demand for mental health emergencies in children to decrease as society returns to life as it was known pre-pandemic.

But, “It depends on how we come out of the pandemic,” he said.

One of DiStefano's concerns is that the multitude of stressors on children has fractured their resilience to the point that they’ll be unable to adequately bounce back on their own.

Precisely the reason for the yet-to-open outpatient and partial inpatient facility, Raymond said.

“Behavioral health, mental health has had a stigma associated with it for far too long,” Raymond said. “Is the demand going to go down? I’d argue that it’s not going to, but if we do the right things, the demand will be in more appropriate things, like outpatient care.

“We need to make sure our kids have the tools they need that doesn’t necessitate a crisis.”

This ongoing series from The Gazette delves into Colorado’s broken mental health care system. In this series, a team of Gazette journalists investigate the gaps in care for children, for veterans, and for the community at large. The series also focuses on solutions that might come as state officials and community leaders sharpen their focus on what for many is a vicious cycle of despair and ruin.