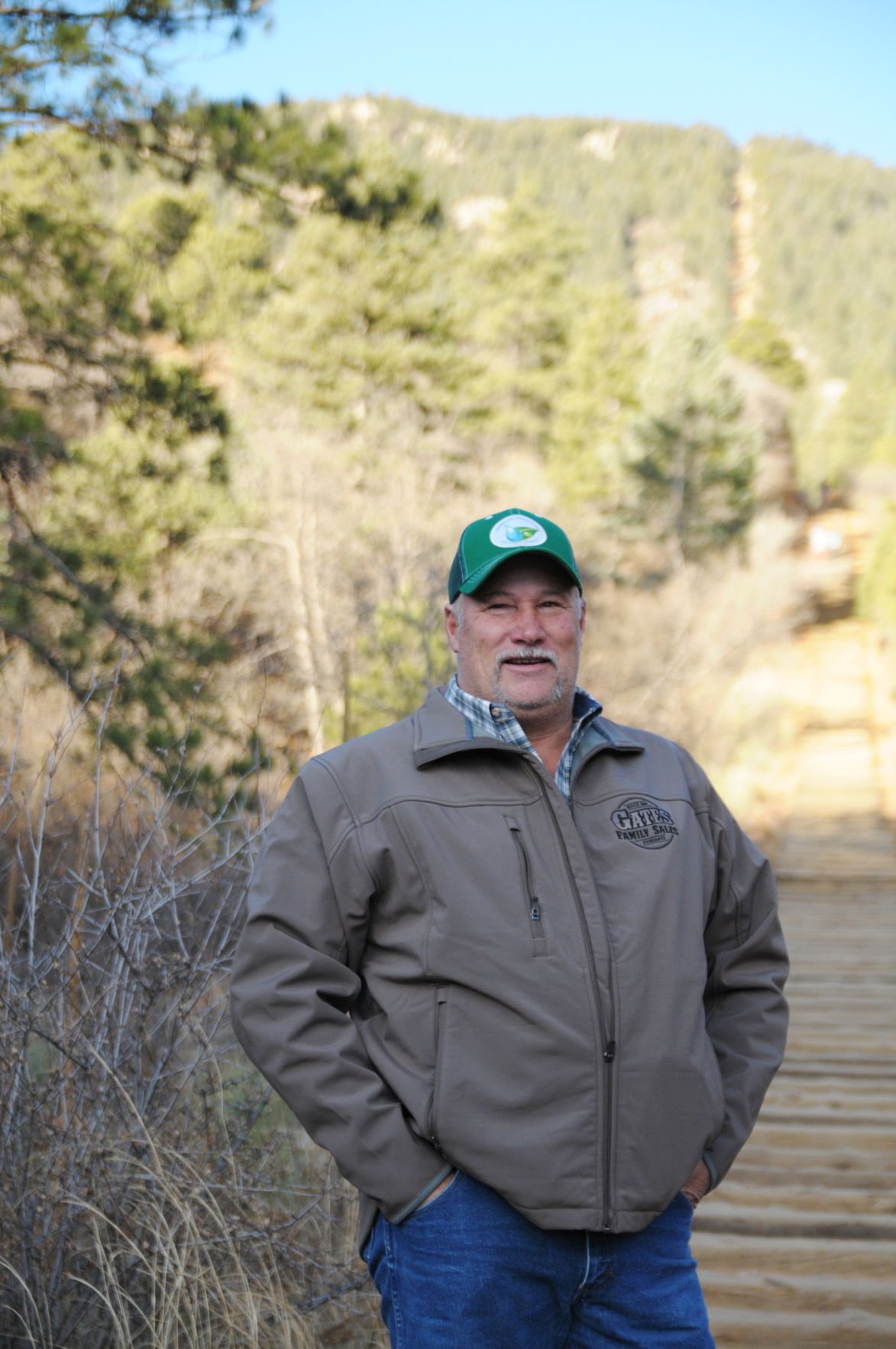 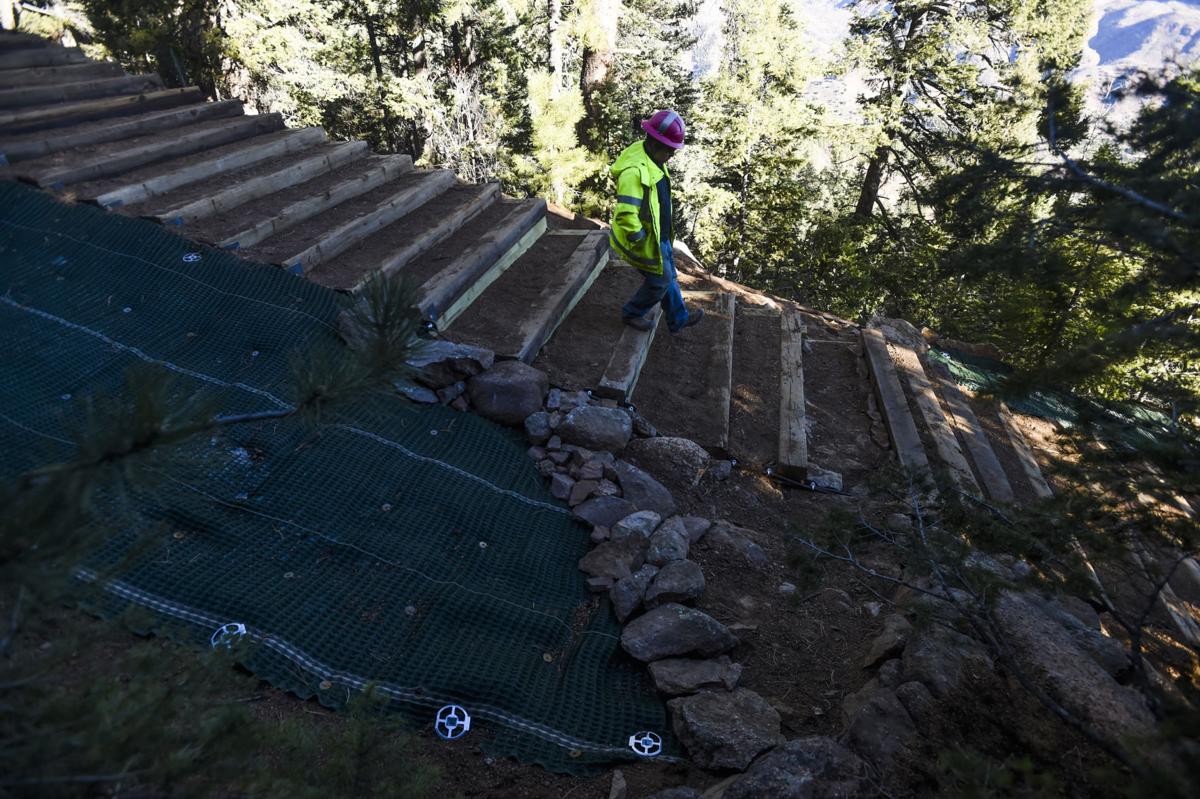 Hugo Benitez walks past improvements he and other workers from Timberline Landscaping have made to the upper reaches of the Incline trail on Friday, November 17, 2017. New timbers, anchor cables, new retaining walls and drains and erosion netting were added to the trail. (The Gazette, Nadav Soroker)

Hugo Benitez walks past improvements he and other workers from Timberline Landscaping have made to the upper reaches of the Incline trail on Friday, November 17, 2017. New timbers, anchor cables, new retaining walls and drains and erosion netting were added to the trail. (The Gazette, Nadav Soroker)

Manitou Incline enthusiasts celebrated the official reopening of the trail Friday after a third and final round of repairs - and Timberline Landscaping celebrated the successful completion of a job like no other.

"Every job has its own complexity, but nothing quite compared to that one there," says Timberline owner Tim Emick.

With every job, Emick's goal is to "create a little bit of heaven" - whether that's sweating through 2,000-plus feet of elevation gain in a mile, relaxing by a fire pit in the backyard or enjoying the holiday season with a spectacular display of lights.

Emick joined Todd Even in starting Timberline in 1982. Emick, then 21 and with a ranching and farming background, says he enjoyed the work from the start - doing landscapes, building retaining walls, being outside. When Even left at the end of 1991, Emick became the sole owner. It was a starting-over period, Emick says, coming out of a serious downturn that had seen Colorado Springs labeled as the foreclosure capital of the country.

Over the years, the company has had to cope with other tough times, including the Great Recession. To survive and thrive, "we've worked to diversify our company as much as we could over the years," Emick says.

In 1997, for example, Timberline added commercial snow removal. It was a true baptism by fire - or by snow - as its first job was helping to dig out from the blizzard of October 1997, which paralyzed the city.

"We dug out places that had been socked in for over a week," Emick says. With that first job, Timberline was not the primary contractor but networked with others in the snow removal business. Since then, "we've grown to probably one of the largest snow removal contractors in the city of Colorado Springs."

In 2001, Timberline added Christmas decor to it services. "We design it, install it, we maintain it, we take it all down," Emick says.

Another new arena: trail construction, added in 2006 or so.

Whether building or repairing trails, "we love that part of the industry," Emick says. "The people who work for us just love to be in the outdoors; they can't stand to be in an office or behind a computer."

Timberline has done construction or repairs on the Ute Pass Trail, University Park Trail and Red Rock Canyon Open Space trails, among others, and its work hasn't been limited to Colorado Springs. Over the summer, Timberline built a trail in Chautauqua Park in Boulder - "a high-profile job" that Emick says was "very challenging."

But not as challenging or high profile as Timberline's work on the Incline.

"It has given us a higher name recognition, that's for sure," Emick says. "Some of the people who call in will say, 'If you built a retaining wall up there, you can build one in my backyard.'"

Timberline had to bid for each phase of the multimillion-dollar contract. "The whole thing going in," Emick says, "was it had to be a win, win, win - a win for the city, a win for the public, a win for Timberline. And it was."

The logistics set the job apart. "You're right there above Manitou, a quarter mile from the street, but yet you're worlds apart because you can't carry the materials up there on your back, so you have to fly them in with a helicopter that runs you above $3,000 an hour. So you better have everything down just right."

The labor was tough on the workers, "but they loved the physical job," he says. "There wasn't a single guy who quit on the job."

Many of the workers - up to two-thirds of the crew - were H-2B workers from Mexico. The government program allows foreign workers to come to the United States to work in temporary, nonagricultural services or labor. Timberline has used the program since 1999, Emick says, "because we just cannot find people here. It's not that we're looking for a cheap labor force; it is that there is no labor force." A labor shortage plagues the construction industry along the Front Range, he notes.

Timberline's work on the Incline has been award-winning; the company was named Grand Award Winner by the National Association of Landscape Professionals for its Phase 1 work. Among other awards over the years, Timberline also has been honored by the association twice for having "the most landscape industry certified individuals on a team."

Timberline's workforce varies depending on the summer, hitting about 160 at the peak during the summer and about 75 now.

"One of the things that we do is, we really believe in and invest in our people," Emick says. "Continuing education for them, we're real big on that."