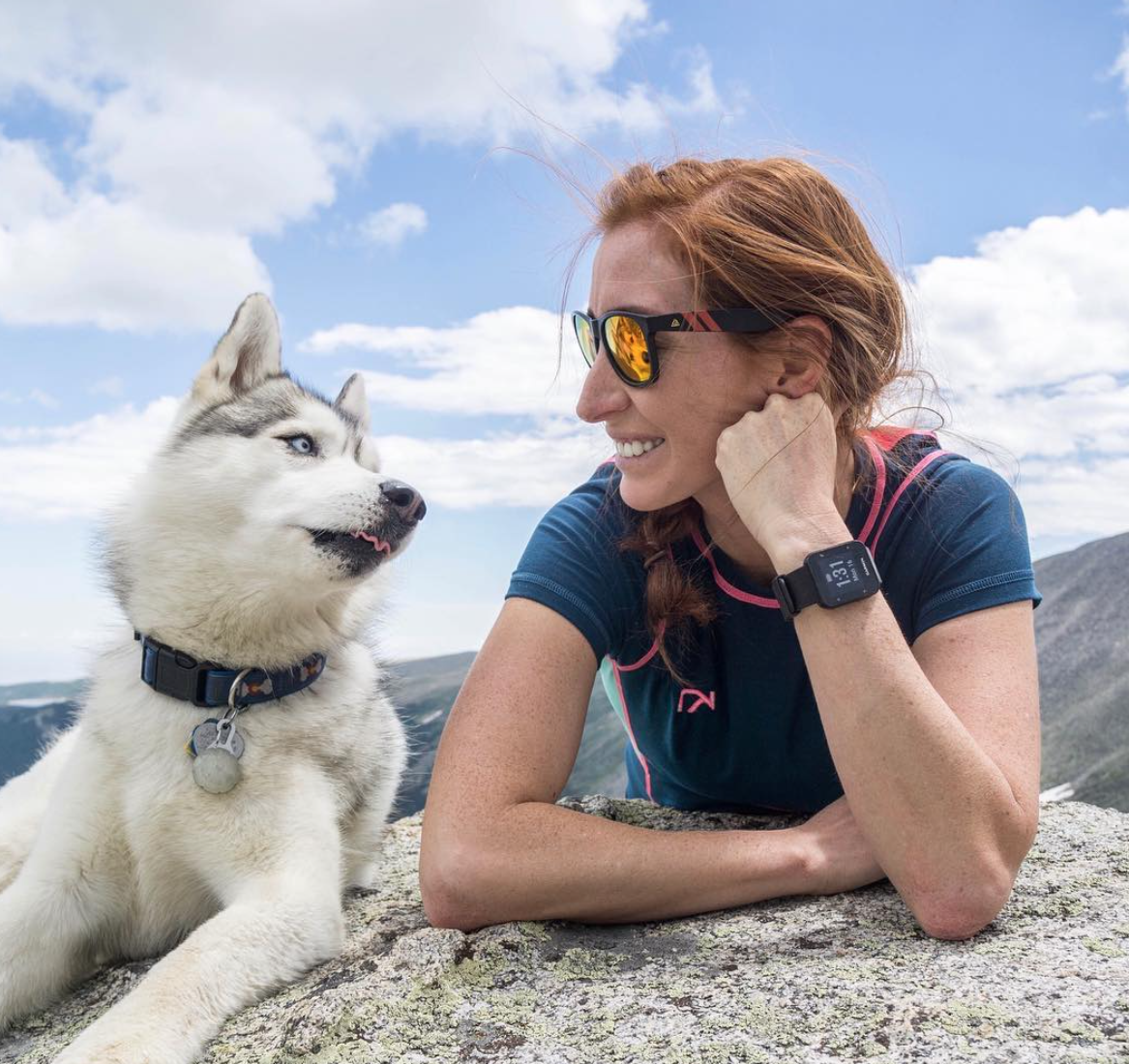 Left: Ellie Briggs and her dog, Loki, climbed all of Colorado’s 14ers together. 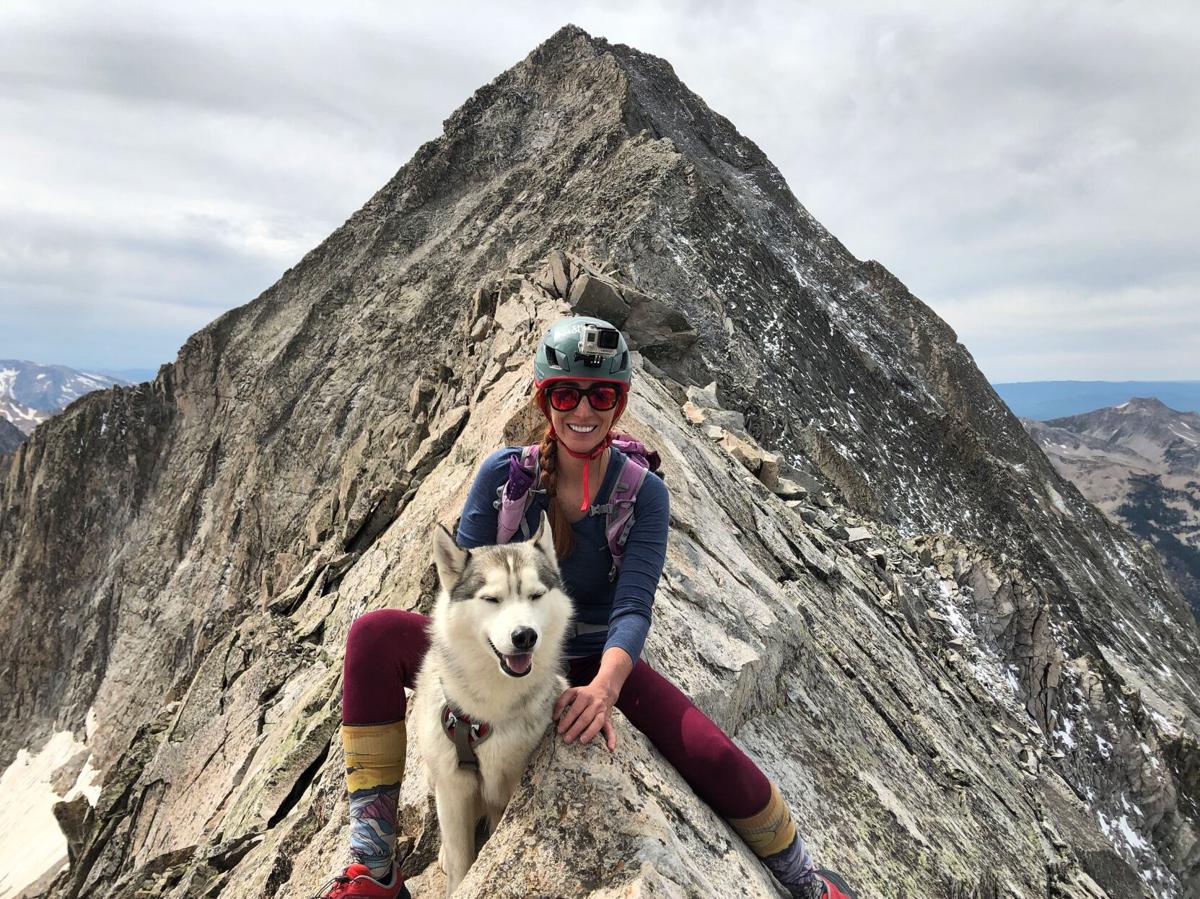 Ellie Briggs and her dog, Loki, pose on Capitol Peak, which marked their last fourteener in Colorado. In pictures on peaks, Loki often looks like he’s smiling. As he traverses difficult terrain, it looks almost like he’s dancing. Briggs found Loki through Craigslist. “It was love at first sight for both of us,” Briggs said. 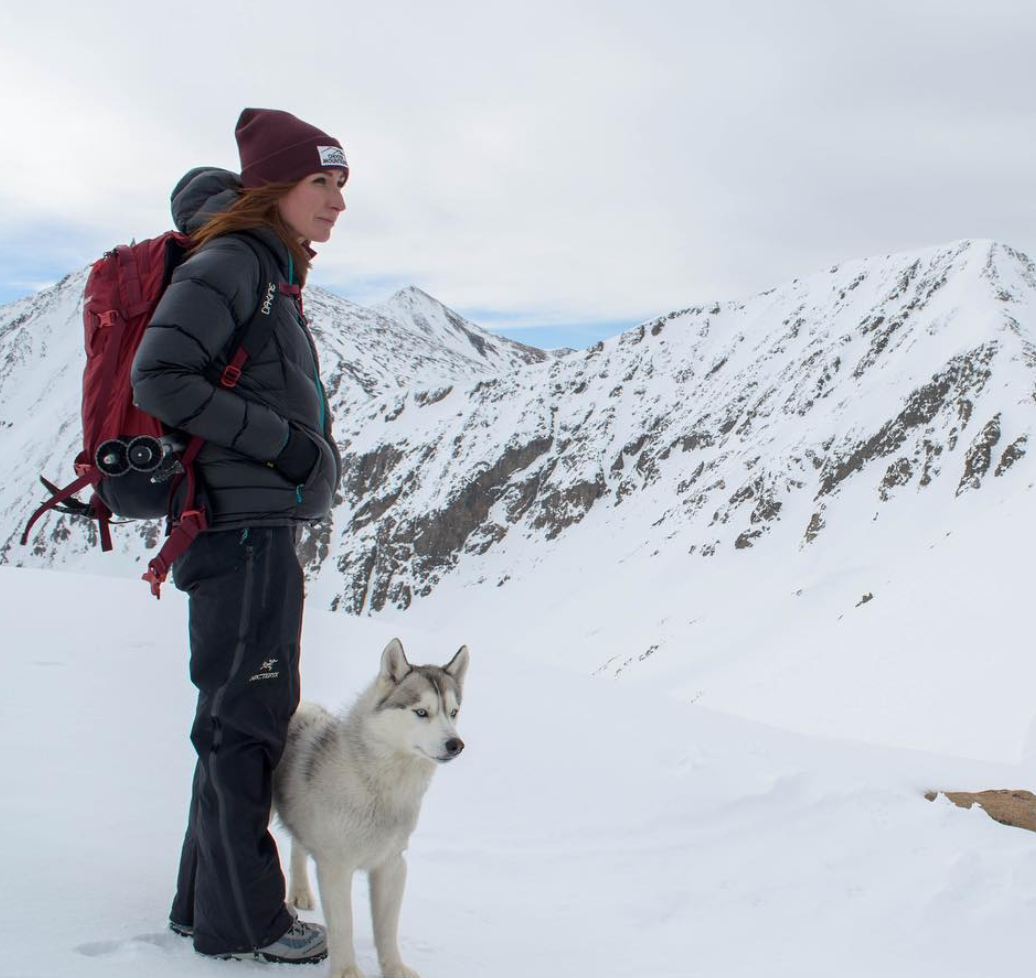 Above: Ellie Briggs stands with her dog and hiking partner, Loki, during one of their adventures. 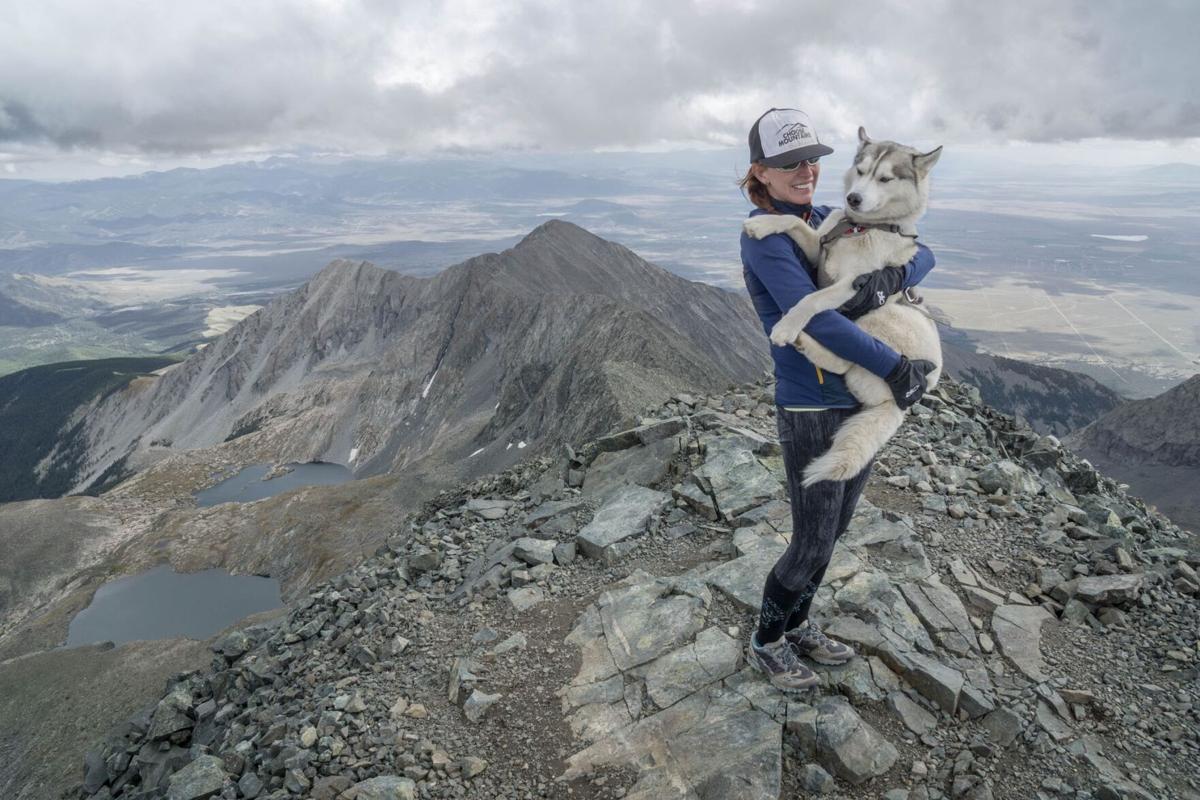 Ellie Briggs and her dog, Loki, pose for a photo after one of their hiking adventures. Together, they’ve summited all of Colorado’s 58 14ers. 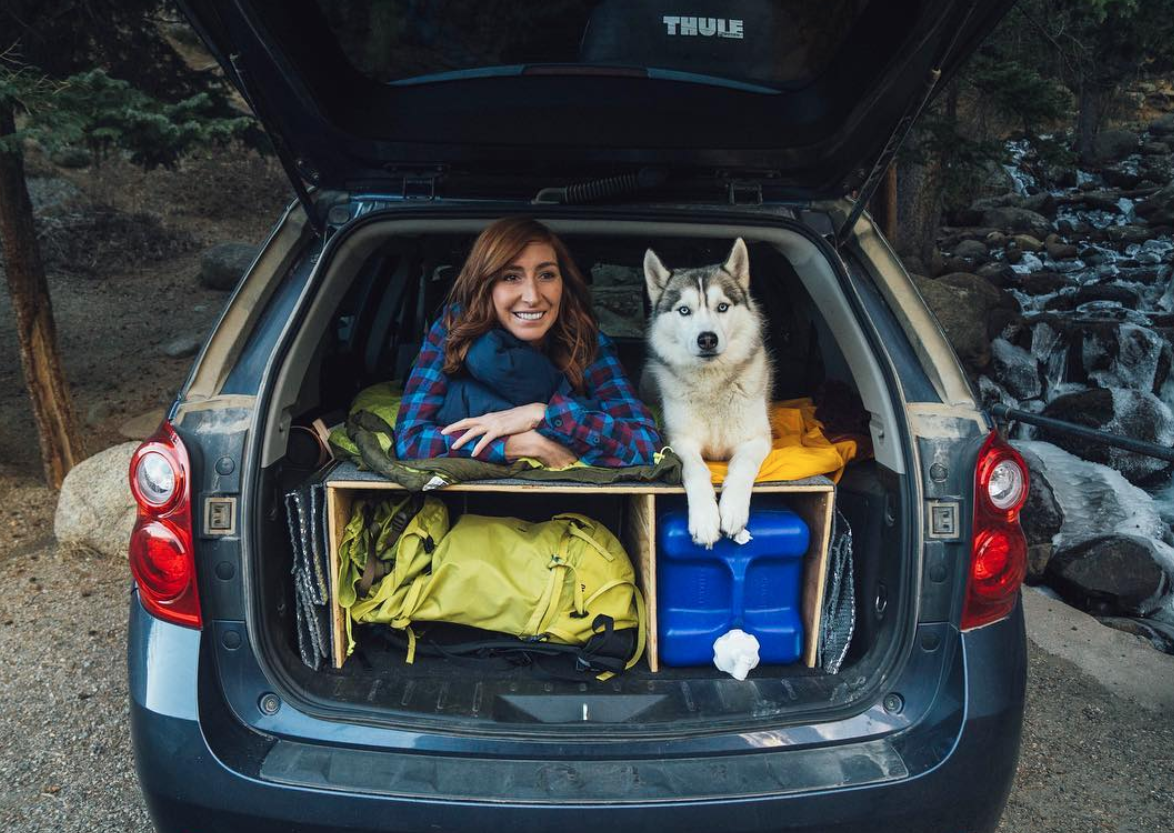 Ellie Briggs refers to her dog, Loki, as more of a hiking partner than a pet. 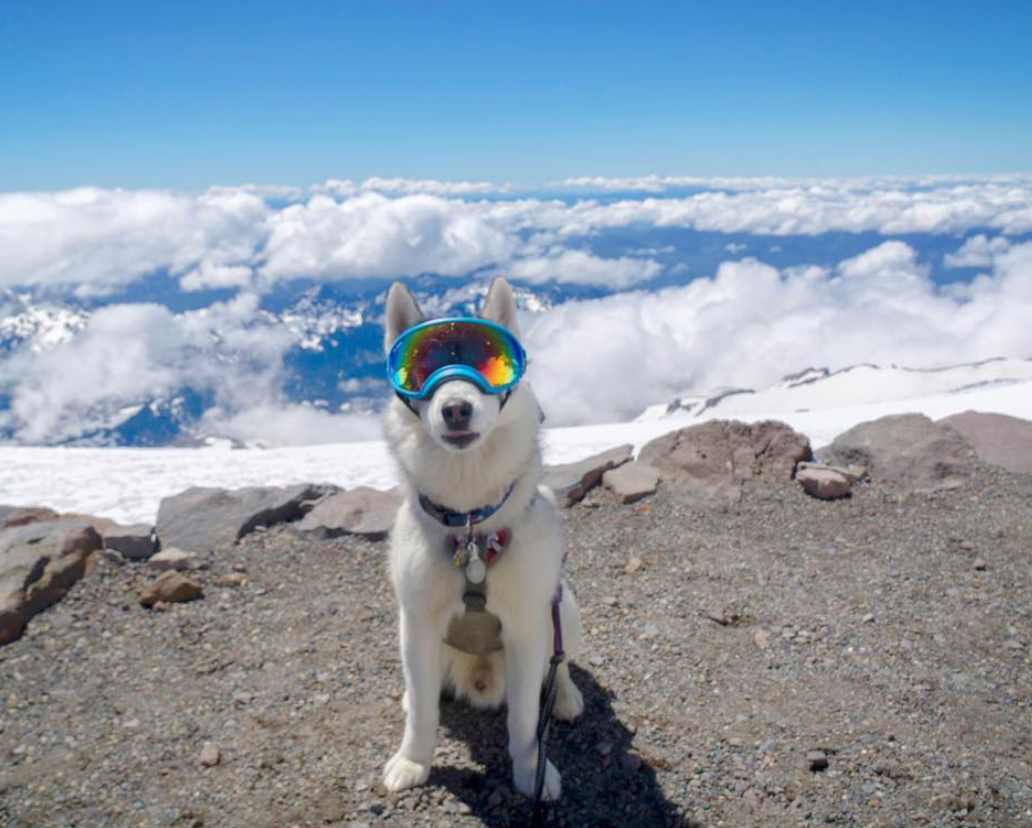 Loki, a Siberian husky, has climbed all of Colorado's 14ers. He's believed to be only the third dog to ever do so.

Left: Ellie Briggs and her dog, Loki, climbed all of Colorado’s 14ers together.

Ellie Briggs and her dog, Loki, pose for a photo after one of their hiking adventures. Together, they’ve summited all of Colorado’s 58 14ers.

Ellie Briggs refers to her dog, Loki, as more of a hiking partner than a pet.

Ellie Briggs had done it. She climbed the daunting Capitol Peak, marking the end of her life-changing, eight-year journey to climb all of Colorado’s fourteeners.

But Briggs, who lives in Littleton, didn’t make much of a fuss. She cared way more that he had done it. “He” being her Siberian husky, who Briggs considers more of a climbing partner than a pet.

She also says he saved her life.

So that’s who got the praise on her Instagram post following the feat: “Loki the dog has summited every 14er in Colorado!”

Loki is only the third known dog to do that. Briggs knew that was a big deal. That they had made history.

And, as Briggs wrote at the time, they almost didn’t even try.

By 2018, the pair had checked off all but one of Colorado’s 14,000-foot peaks. Briggs purposefully left Capitol for last — because she found it to be terrifying — and then bailed on an attempt due to high winds.

She had a full year to prepare for another Capitol attempt. And to worry about Capitol. Every time she thought about Capitol, her heart would race. It was the mountain that made headlines in 2017 for killing five climbers in a six-week period.

“Enough is enough,” she thought. “How much is our life worth?”

She wrestled with that question before arriving at the “simple answer that of course our lives are worth far more than some dumb pile of rocks.”

Then there was the longer answer.

There had to be a reason that she and Loki had worked so hard and trained so much for years. They had built trust in each other and perfected techniques and commands.

And there had to be a reason Loki — the dog Briggs serendipitously adopted from a Craigs-list ad — enjoyed mountaineering so much. In pictures at peaks, Loki often looks like he’s smiling. As he traverses difficult terrain, it looks almost like he’s dancing.

Loki is also unusually built, as far as huskies go, for the challenge. He weighs only 40 pounds and has an obedient and mellow temperament.

There was a reason, for sure, that Briggs started all this. Before she found herself on her first fourteener in 2012, she didn’t hike at all. She wasn’t outdoorsy. After a new friend invited her along, Briggs wore new hiking shoes she bought for $35 and a Hollister sweatshirt.

When she got to the top of Mount Elbert with Loki, Briggs felt a high like she had never known.

Just months prior, Briggs was at the lowest point of her life.

At 30, she had just parted ways with her college boyfriend, an on-and-off relationship that Briggs describes as tumultuous. She endured years of verbal abuse and physical abuse.

Breaking up didn’t make the pain go away.

“Going through the process of being verbally abused over and over again, it chips away at you little by little,” Briggs says. “I lost sight of who I was. I lost literally all of my friends. When that ended, I didn’t have a personality of my own.”

She hit a breaking point. She wasn’t eating or showering.

“I felt really alone,” she says. “I had nothing. I had nobody, no friends, no boyfriend. I had isolated myself and pushed everyone away.”

And she kept hearing the word her abuser called her: worthless.

Briggs’ mother and brother came to visit and they insisted she get help.

So she started seeing a therapist, who eventually suggested Briggs get a dog to keep her company and active.

She searched Craigslist and saw a photo of Loki, who a family had rescued from a puppy mill. She sent a message and was luckily the second of 400 people to reach out.

“It was love at first sight for both of us,” Briggs said.

The therapist had another suggestion for Briggs. Make some human friends.

She took a chance and went to a happy hour she found on meetup.com.

Walking into the bar was “so scary,” she recalls.

“I wasn’t confident,” she said. “I was shy. I wasn’t sure if people were going to be able to deal with all the baggage that I had.”

She found a seat next to two women. They hit it off. They asked Briggs to join them on a fourteener.

After “the suffer fest” of climbing, she was hooked.

“I really got bitten hard by the fourteeners bug,”she said. “That’s all I wanted to do from then on.”

And she didn’t want to do them without Loki.

Briggs says some climbers have slammed her for bringing a dog along, saying it’s not safe and will encourage others to bring dogs onto dangerous hikes. Briggs assures them that Loki is highly and specifically trained for the task.

“Most dogs shouldn’t be doing these hikes,” Briggs said. “It’s a little controversial. But that’s not a good enough reason to not do it.”

For the most part, Loki is a welcome sight.

“People are so psyched,” she said. “It’s the last place you’d expect to see a dog. But to see him in action, it’s amazing.”

Because she’s always hiked with Loki, the two things — hiking and hiking with Loki — have fused into one thing in Briggs’ mind.

Today, she’s far from her 30-year-old self. She wakes up and wonders, “What are we going to do today?” Whatever challenge she and Loki decide on, she feels confident they can accomplish it.

“This has shown me who I am and who I am supposed to be,” Briggs said. “I was able to take a bad situation and turn it into something beautiful.”

On her Instagram, you’d be hard-pressed to find a photo that doesn’t include Briggs and Loki. Her summit photos show a woman with a wide smile and a sense of peace, earned after miles of hard hiking and letting her mind run.

“At the end of a fourteener, I feel completely renewed,” she said. “I feel like a whole new person.”

Loki might feel the same. He’s known to lie down at the summit and take in the view. He lifts his nose up in the air and lets the wind blow over his face.

In one snowy photo, they’re both standing and staring in the distance. Together, they share the same expression. It’s a look of determination.

For a caption, Briggs found a quote that fit the look. It fit her — no, their —story, too.

“Some thought she slipped into madness for the way she changed,” she wrote. “She thought it was madness to live the life she once did.”

Above 14,000 feet on Colorado's Crestone Peak, Josh Collman wasn't feeling quite right. He felt exhausted that morning of Aug. 13, 2017.

HE’S DONE IT!!!!! LOKI THE DOG HAS SUMMITED EVERY 14ER IN COLORADO!! I knew for a long time that I wanted to save Capitol Peak for our #14er finisher. For one thing, I was terrified of this mountain. After the deaths of 5 climbers in 2017, I began to question if my ambition was overshadowing my better judgement in taking Loki up such a dangerous mountain. I wouldn’t have been nervous to go alone, but to climb it with a dog? NOBODY DOES THAT. At what point do I draw the line and say, “Enough is enough. How much is our life worth?” I wrestled with that question over and over. The simple answer is that of course our lives are worth far more than some dumb pile of rocks. But the more complicated answer is that given everything we’ve done leading up to this point - all the years spent building up confidence and trust in each other, perfecting techniques and learning the safest ways to move over different terrain, dangling him from a rope and making him take whippers to simulate belayed falls - it’s all been for a reason. Yes, we were ready. I just needed a human partner that I could trust with my dog’s life, and luckily, that was a no brainer. 7 years ago @Korrenade took us up our very first 14er, Mt. Elbert. She’s a strong, methodical climber who thrives on over-preparedness as much as I do, and I knew that she would treat all three of us with equal importance. It seemed only fitting that she be there as we summited our last 14er as well. This last weekend we backpacked in to Capitol Lake for our final attempt. In the early hours of September 15th, under calm winds and a brightly lit moon, we began our bid for the summit. The day couldn’t have been more perfect. Everything came together as we slogged up the grassy slope to the first ridge, traversed southeast across rocks and snow, then climbed the talus field to K2. Loki showed no fear as we meticulously crossed the knife edge, and from there we were cheered on to the summit from every party we encountered. A HUGE congratulations to my favorite climbing partner and best friend, Loki Eddison, for this monumental achievement in Colorado mountaineering history! I love you to the highest mountain and beyond. 💗⛰