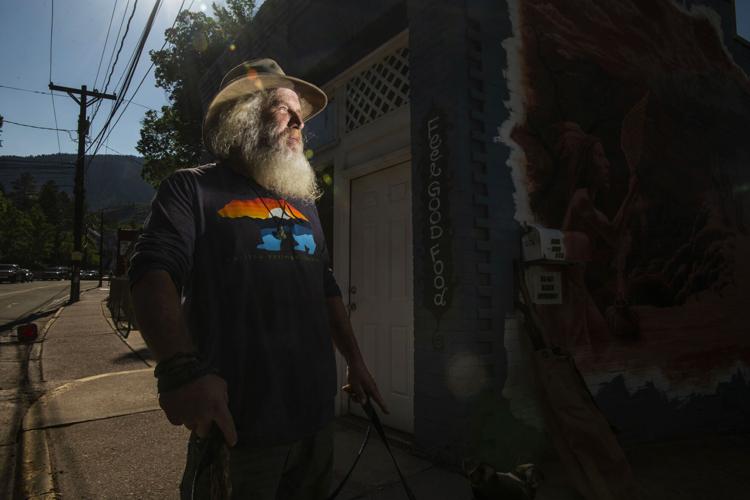 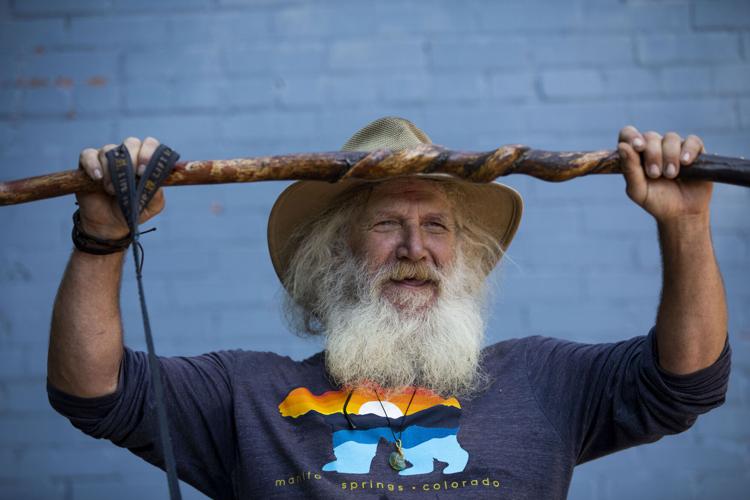 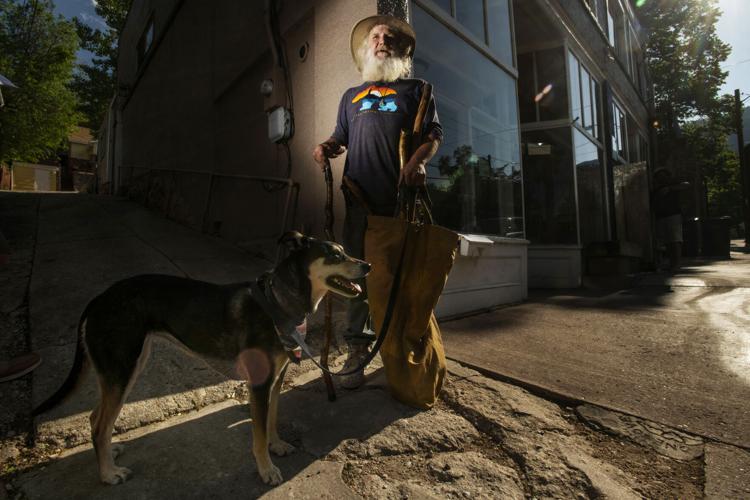 Dave Cutshaw, 63, aka “Mountain Dave,” poses for a portrait with his dog, Sage, in Manitou Springs. 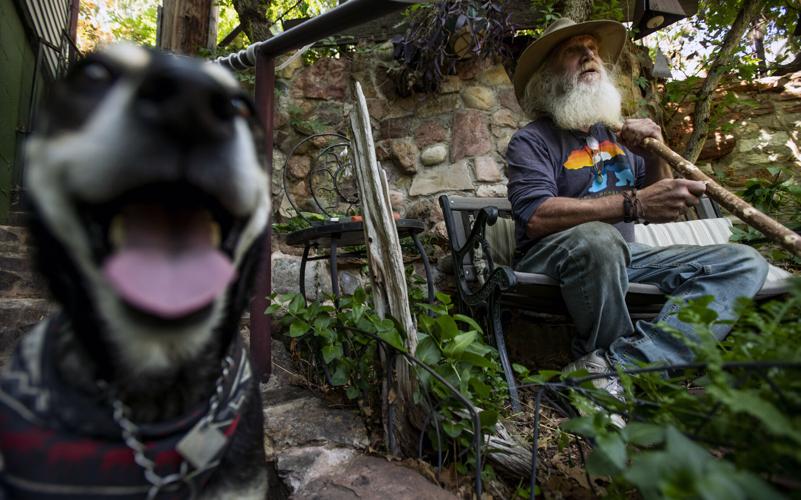 Dave Cutshaw works on carving a walking stick with his dog Sage nearby at his home in Manitou Springs. 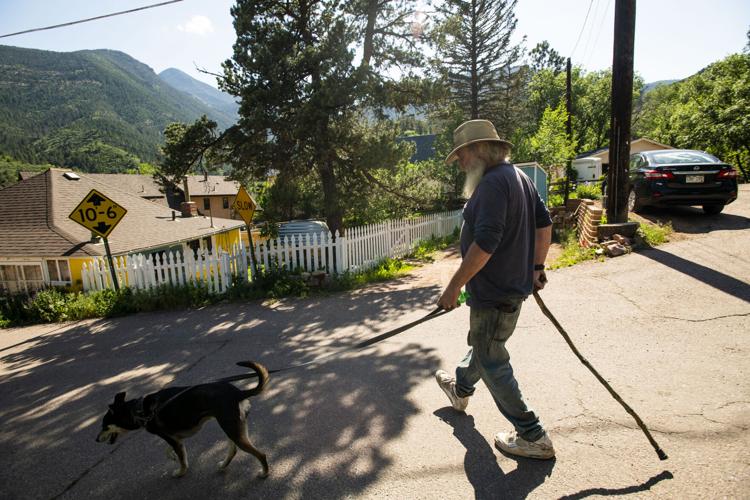 Dave Cutshaw’s best friend is his dog, Sage. “She is a sweetheart,” he says. “So eager to please.” 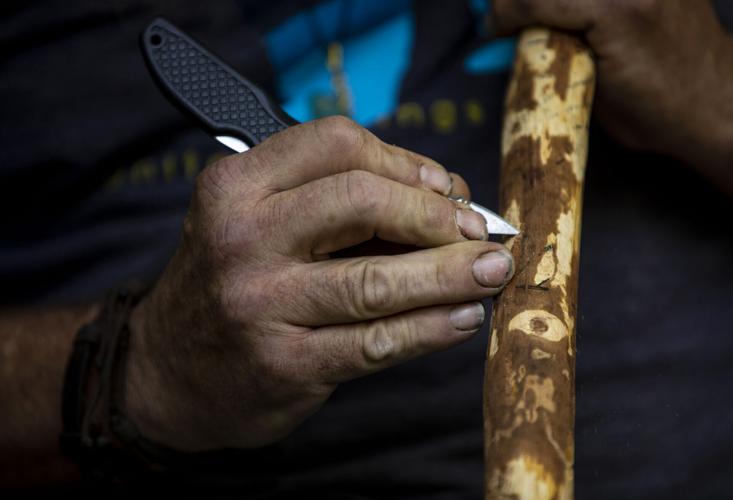 Dave Cutshaw, known as “Mountain Dave,” works on carving one of his locally famous walking sticks. 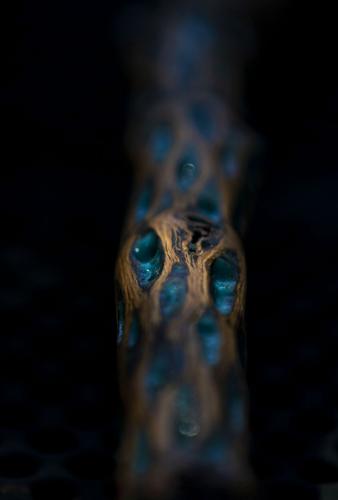 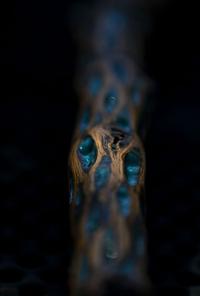 A walking stick with turquoise powder crafted by Dave Cutshaw. 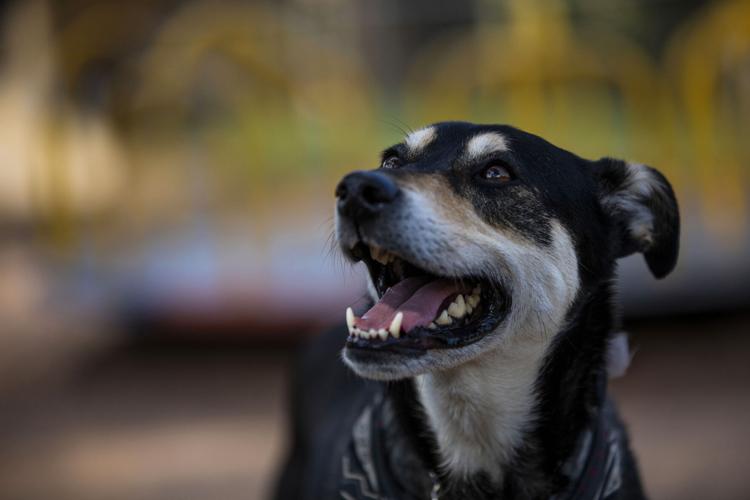 Sage smiles in Manitou Springs on June 8, 2021. Dave Cutshaw, 63, known as “Mountain Dave,” and his dog Sage are seen as mascots of Manitou Springs. (Chancey Bush/ The Gazette) 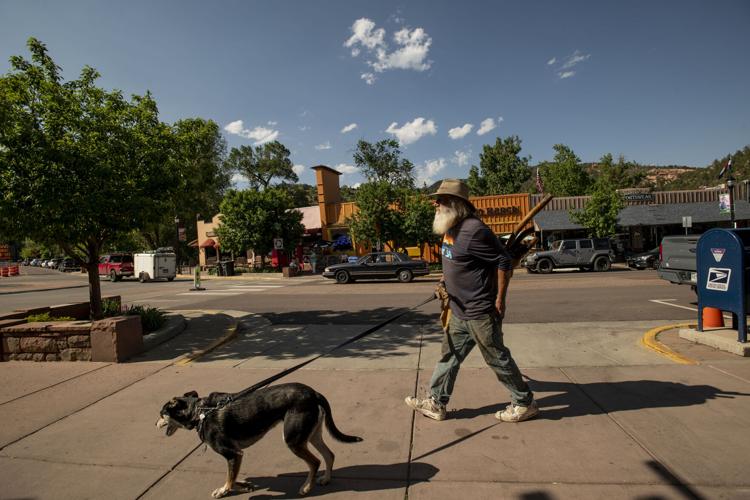 Dave Cutshaw and his dog, Sage, are a well-known pair in Manitou Springs. “I think he embodies the old Manitou feel,” one local says of Cutshaw. 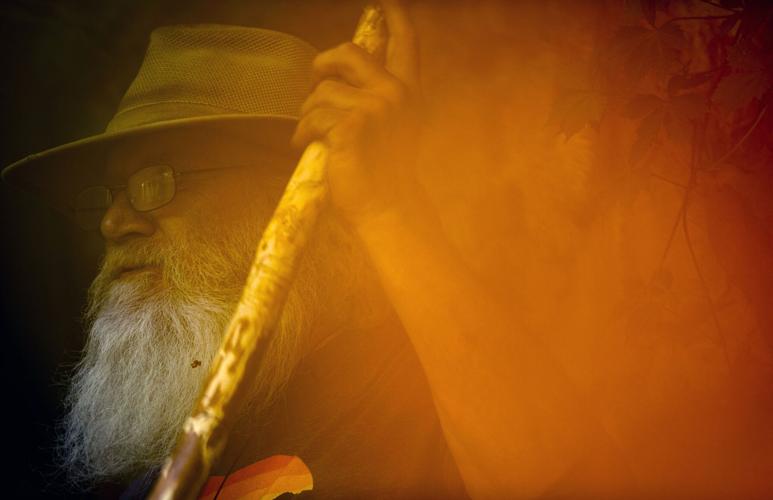 “I’m just not the type to sit down and be told what to do, have a 40-hour workweek and all this,” says Dave Cutshaw. 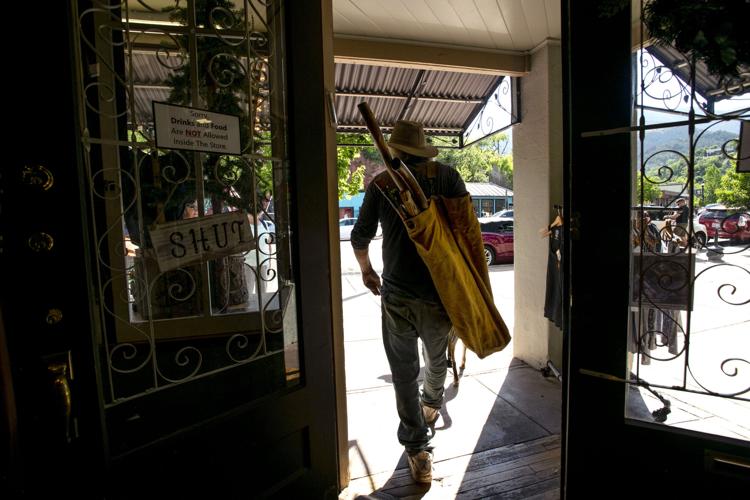 Dave Cutshaw, 63, known as "Mountain Dave," exits Mountains West with his dog Sage and bag full of walking sticks in downtown Manitou Springs on June 8, 2021. Cutshaw collects and carves unique walking sticks that have become locally famous and sells them at the Mountains West store. (Chancey Bush/ The Gazette) 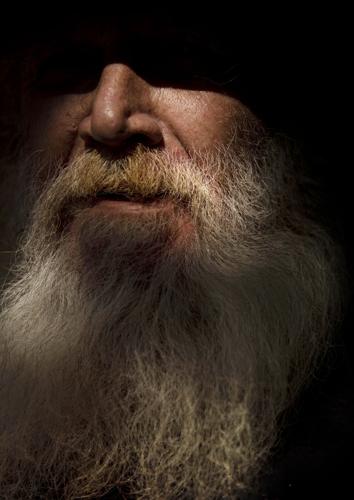 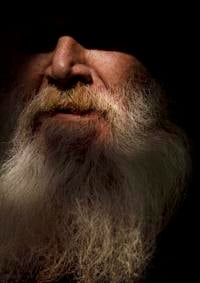 Dave Cutshaw, 63, aka “Mountain Dave,” poses for a portrait with his dog, Sage, in Manitou Springs.

Dave Cutshaw, known as “Mountain Dave,” works on carving one of his locally famous walking sticks.

A walking stick with turquoise powder crafted by Dave Cutshaw.

Sage smiles in Manitou Springs on June 8, 2021. Dave Cutshaw, 63, known as “Mountain Dave,” and his dog Sage are seen as mascots of Manitou Springs. (Chancey Bush/ The Gazette)

Dave Cutshaw and his dog, Sage, are a well-known pair in Manitou Springs. “I think he embodies the old Manitou feel,” one local says of Cutshaw.

“I bet you’ve had some adventures,” she says to the dog, Sage.

Everybody knows Sage around town. Everybody loves Sage. The police — having come to know Cutshaw as they come to know any character living in the surrounding hills — tend to give Sage treats.

“Sage and the guy,” jokes the owner of the shop down the street, Carlos Real. “That’s what we call him, just the guy.”

The guy, too, has become something of a mascot here in the town proud of its quirks.

Cutshaw is the subject of paintings, his whole aesthetic backdropped by colorful storefronts and evergreen slopes irresistible. Once, he saw a painting of himself displayed beside one of Charles Rockey, the Gandalf-looking resident who was the face of Manitou before his death in 2019.

Cutshaw says he could’ve cried at that moment, seeing the paintings side by side. “I said, OK, that’s an honor right there.”

And it’s an honor for him to meet any and every stranger who stops to say hello.

He’ll just be sitting, playing his guitar alongside Sage, when some tourist wants to take a picture. He’ll just be roaming around town, the nice bag he found in a dumpster slung over his shoulder and stocked with his handmade walking sticks, when tourists scramble for their phones, as if scrambling to get a photo of a passing ghost.

They see Cutshaw as a mascot. An embodiment of this odd place.

“I think he embodies the old Manitou feel,” says a longtime local, Kristi Kahtava. “That sort of hippie, carefree spirit. He represents old Colorado in a way. You know, a lot of rich people have come here and joined the rat race. But he came here for the mountains.”

That’s what she learned when she met him about four years ago. Cutshaw was still somewhat new to town, but he quickly made a name for himself. His walking sticks were gladly accepted at Mountains West, where Kahtava is a manager.

Mountain Dave became more than a vendor at the shop.

She knows her town as having “a dark underbelly,” as having mysterious wanderers with mysterious intentions. While living in a tent in the local woods, Cutshaw came to know these types. He knows when it might be a good time to play his guitar by Mountains West, keeping watch for his friends inside. He’ll walk them to their cars at the end of the day.

Cutshaw has a roof over his head now. He rents a place high in the hills, where there’s a garden growing wildflowers, ferns and marijuana, and here he’ll spend afternoons shaping, sanding and polishing timber into walking sticks. He has a truck now. Driving it through town sometimes garners glares and snide remarks from people less fortunate, people he used to know on the streets.

One gives him a look now. “Must be nice to have friends,” the man says.

To which Cutshaw smiles and says nothing back. He mutters under his breath later: “Sure sucks you don’t.”

The bosses at Mountains West became friends. They don’t take any cut on the $60 walking sticks; they give it all to Cutshaw, who started selling them years ago “just to get food in my belly,” he says.

Another business owner down the street became a friend. Real has relied on strangers needing a quick buck to haul sculptures in and out of his shop every day.

“A lot of people come in and tell me they want work and need help and this and that,” he says. “Well, it takes just one day to know.”

Real found Cutshaw to be different. This was what John Touchstone found, too. The building contractor moved to Manitou in 2016 and met Cutshaw.

“He may have been homeless, but he wasn’t putting his hand out to anyone,” Touchstone recalls. “I would see him hike up the street in the morning to hike into the mountains, and then return with 10, 15 blank sticks in the afternoon, then the next day he would be carving, sanding, staining and selling sticks.”

He learned Cutshaw spent much of his life working construction. Touchstone asked if he’d take some work. He found Cutshaw to be gracious and honest, a man who’d work until his back gave out.

Touchstone became a friend. As did the landowner who offered Cutshaw rent once he worked up steady funds through the walking sticks and Social Security. As did the man who cut Cutshaw a deal on the truck. As did the woman who set him up with Sage.

Cutshaw has made a lot of friends. He credits them for saving him.

When he settled in Manitou five years ago, “I was ready to die,” he says. “I was depressed and miserable.”

Better to die in these mountains than back home in Missouri, he figured. Back home, he says he saw his mother through a six-year battle with cancer. It was a “heart-wrenching” period, he says.

Then he says he sold the house and everything else he could to cover the medical debt that had racked up. Then he packed a bag and boarded a Greyhound to Colorado, to the land that captivated him in his youth.

He was a teen in 1974 when he remembers first coming to Manitou. He and a buddy left everything behind in Missouri and pitched a tent in the mountains. They’d go back home, eventually.

And this set the stage for the life that followed. When he wasn’t in trouble for getting caught with pot, Cutshaw would be in and out of Missouri between wanderlust-tugging trips around the country. Colorado was one place he kept coming back to. He’d pick up work where he could — “to get enough gas to get down the road,” he says.

He never could settle down. That’s what his mom always told him.

“I’m just not the type to sit down and be told what to do, have a 40-hour workweek and all this,” he says.

“You know, my daddy went to work every day, five or six days a week, and he was miserable. I said to myself, I don’t wanna be like that. I wanna see the world. I wanna experience things. Can’t be a slave to society.”

He couldn’t be a bum either, he knew. Upon arriving to Manitou, he was adamant about showing people he wasn’t that.

“You could never call Dave homeless. He chose to be in the mountains,” Kahtava says. “That was his dream, and he followed that dream while he was getting stable. He’s done that, and I’m really proud of him for that.”

“We’ve become quite the name around here,” he says. “Apparently, Manitou needed a mountain man.”

And how could he leave all of these friends? His best friend, of course, is Sage.

GREENWOOD VILLAGE • The view from the parking lot is stunning, how the massive Pindustry towers over everything around it. So is the view when…