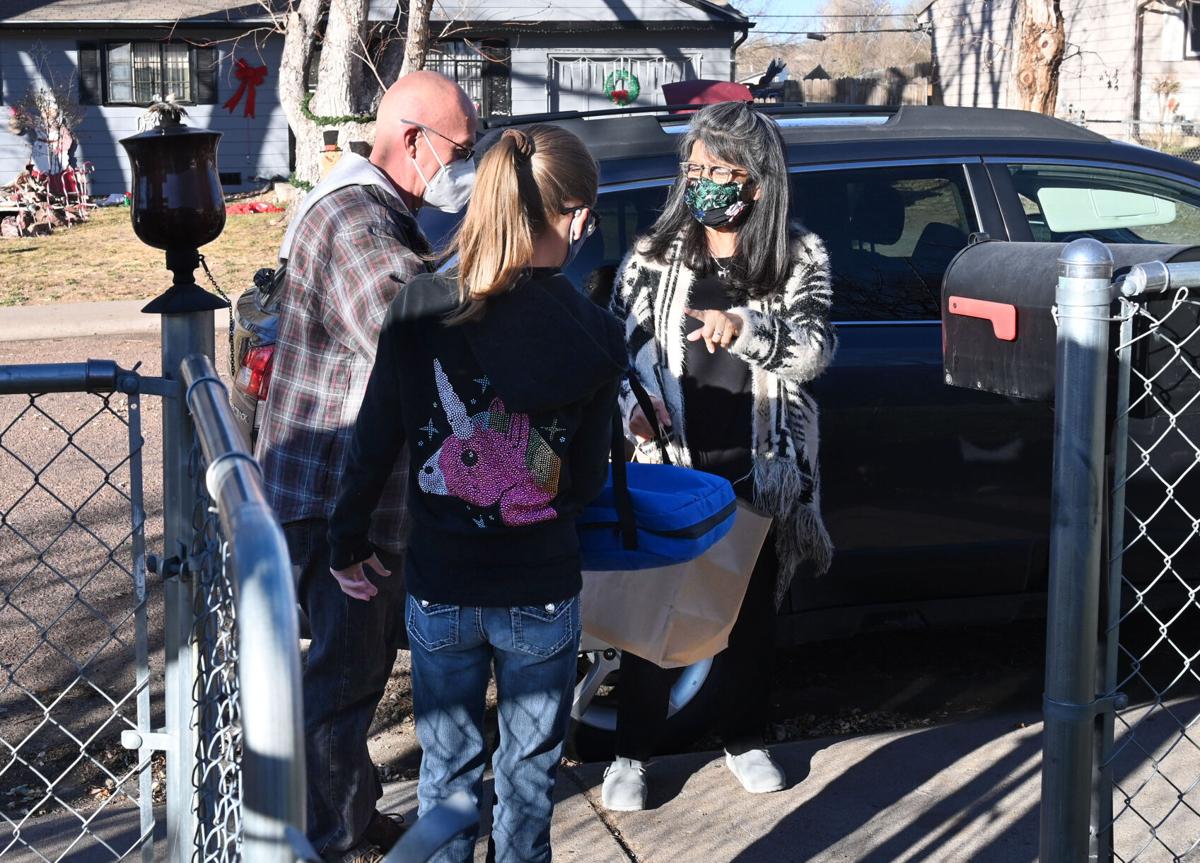 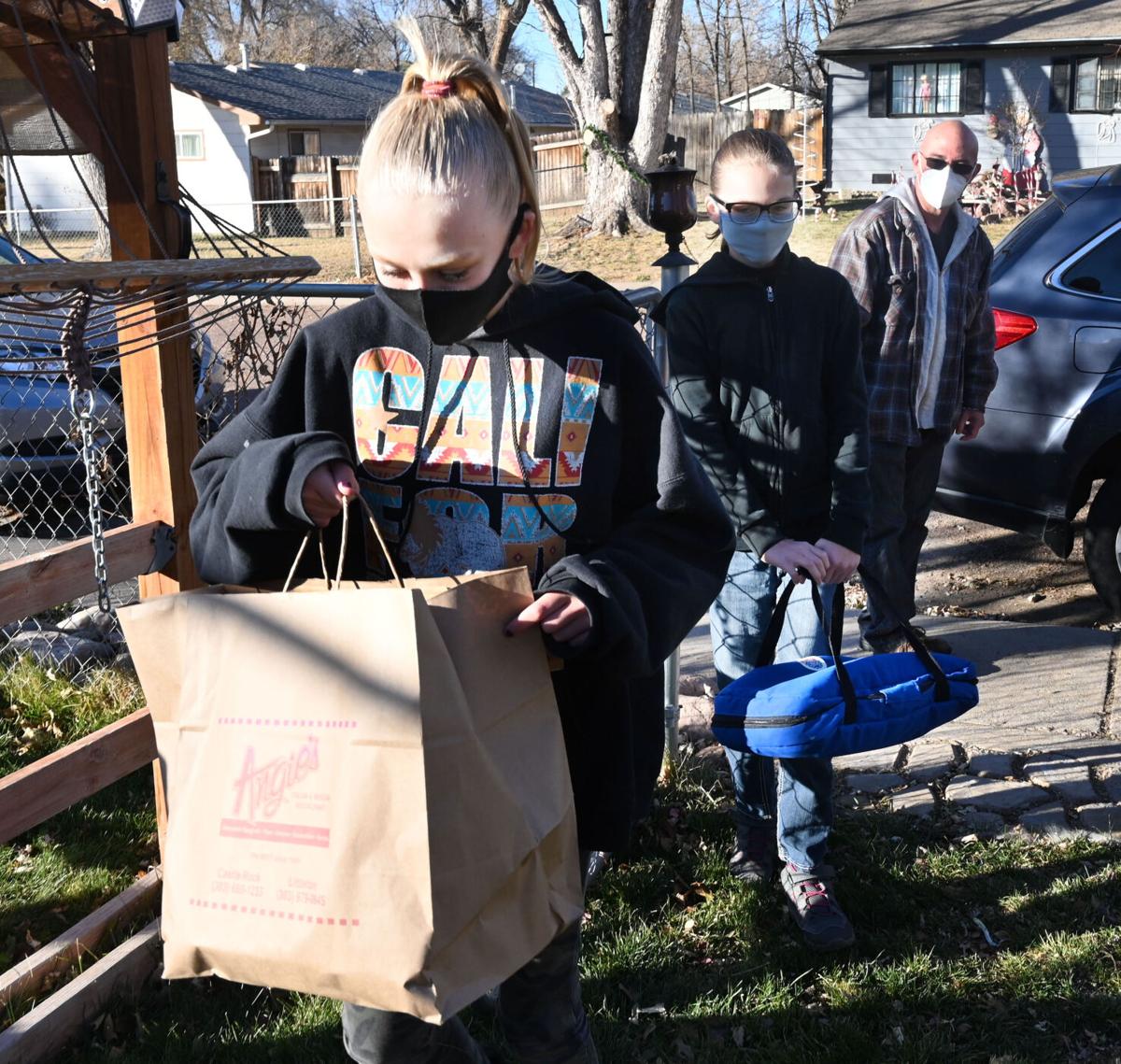 One of the kids takes a peek at the goodies as Annette Falkman delivers dinner to the Escalante family as part of the Families Together program. 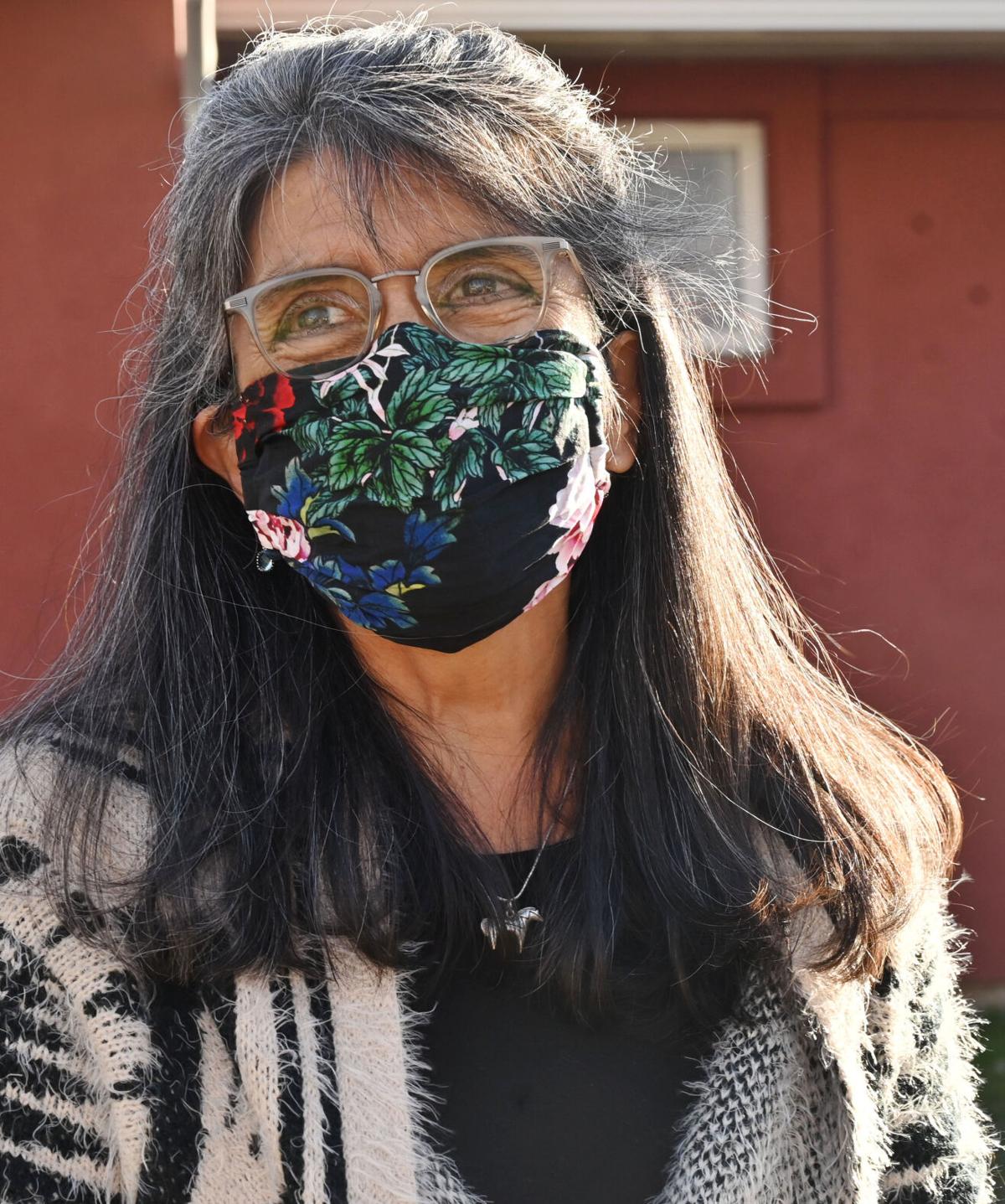 Annette Falkman started as the Escalantes’ Families Together neighbor in May. When a notice seeking volunteer neighbors for Families Together popped up on her Facebook page in April, she thought it sounded perfect. “This was something that I could do, and I love doing it,” Falkman said.

One of the kids takes a peek at the goodies as Annette Falkman delivers dinner to the Escalante family as part of the Families Together program.

Annette Falkman started as the Escalantes’ Families Together neighbor in May. When a notice seeking volunteer neighbors for Families Together popped up on her Facebook page in April, she thought it sounded perfect. “This was something that I could do, and I love doing it,” Falkman said.

When Lelia Escalante was in her 20s and raising two kids, she wasn’t doing it alone. She had her mom, and a solid network of family and friends to provide practical and emotional support. There were certainly moments when she felt overwhelmed and isolated, but the feelings weren’t a defining state.

She’s 51 and dealing with the painful effects of fibromyalgia and arthritis; there’s a cyst in her hip and surgery in her future. Her mom is now in her 80s, her old support group scattered. Escalante and her husband, John, 54, are again parents, this time to five of their grandchildren, who range in age from 11 to 17.

A few hours respite is a blessing. A few days off, more like fantasy.

“I thought there would be more help, but with the kinship grandparents, once DHS (Colorado Dept. of Human Services) is out of it, it seems like there aren’t a whole lot of resources or options,” said Escalante, of Colorado Springs.

The children’s adoption was finalized in October 2016. The last time the couple had a “vacation” from 24/7 parenting duties to five siblings, all of whom have varying degrees of emotional trauma, was more than two-and-a-half years ago, when the woman who’d previously fostered the two boys took all the kids for five days.

“When she dropped them off, she was like, ‘Never again,’” said Escalante, with a wry laugh.

But the woman also had a suggestion. She wanted to connect Escalante with a local agency, Families Together, that pairs adoptive and foster families with trained “neighbors,” who deliver a monthly meal and the kind of personal support and connections the system does not.

What might seem like a small gesture — food once a month, an adult conversation with a compassionate friend who truly understands her situation — have helped pull her through, especially during the pandemic shutdown.

“It’s been a rough year. There used to be six hours a day I’d get a break, when they were at school, but now there’s home-schooling … and I am feeding and cooking, every day, three times a day and two snacks, for five kids,” Escalante said. “It is just so wonderful to not have to do that one time. I love it. The kids love it. Honestly, Families Together has been a lifesaver and the only thing I found that’s out there to help us.”

Hope and Kyle Forti founded the nonprofit in 2017 to help bridge the gaps — and get beyond the red tape and bureaucracy — they’d experienced as foster parents.

“We said, let’s humanize this and bring it into what I would want somebody to give my sister if she was across the country and struggling with postpartum depression,” Hope Forti said. “These are the families that might not even get formal support from the formal child welfare system, but need it.”

The nonprofit — founded as Foster Together, before expanding to also serve adoptive, reunified and kinship families — was starting to gain traction, and a widening pool of volunteers, when 29-year-old Kyle, a popular local political consultant, was killed in a helicopter crash in Kenya on March 3, 2019.

Hope’s family and friends immediately mobilized. Despite her despair, Hope says the time granted her a painful, and powerful, perspective about what it takes for a family to survive a crisis.

Most importantly, that it can’t be done alone.

“My mom moved in, my grandma moved in; my sister’s been here off and on. I don’t think we had to cook for, like, two months and I still have somebody who brings me dinner once a week. That’s what people do when tragedy happens,” Forti said.

That’s exactly the kind of support she hopes her nonprofit can provide.

“I am constantly telling people that Families Together would not still be running if I didn’t have the social capital that kept my family running so that I can do this,” said Forti, a mother of two. “This organization is not here because I’m amazing, it’s because I have a community around me who are literally doing what I am trying to build for other families who need it. That’s my inspiration for doing this. I don’t think anybody should be alone through something difficult.

“We can say to them … with a warm meal and a friendly note and a text that says hey, checking in on you. You’re literally not alone.”

That message is a critical one in a depressing year of pandemic closures and social anxiety unseen in generations.

“I don’t think there’s any question that families in our community have historically felt isolated and that sense of isolation has been magnified during coronavirus,” said Ned Breslin, president and CEO of Tennyson Center, a Springs-based agency that since 1904 has provided services to Colorado’s most vulnerable, neglected and abused children.

According to the CDC, social isolation and family stress are two major indicators of neglect or abuse at home. During the pandemic, and with school closures and remote learning, moms are having an especially tough time, Breslin said.

The moms his agency works with didn’t have it easy to begin with.

“The burden of this virus has really gone on moms disproportionately,” said Breslin, whose agency also operates a residential facility and therapeutic K-12 school. “They feel frustrated with the kind of on again, off again schooling they’re experiencing. I think every effort we make to create community around families that are feeling those things is good for those families, and frankly good for Colorado.”

After partnering with Forti and Families Together for several years, Tennyson recently announced an official merger with the nonprofit meant to expand the social welfare reach of both groups, at a time of unprecedented need.

Because of the new relationship with Tennyson, Forti said that the families being served by Families Together are able to get counseling services, thus support that’s a “much more holistic package.”

Tennyson’s families, in turn, get “neighbors.”

“The addition of Families Together to our existing offerings brings a human element, a friend element, whatever you want to call it, to a relationship that is really important to families whose anxiety has spiked throughout this pandemic,” said Breslin. “It’s particularly welcome now, because these families feel shut in, they feel their options are limited. There’s now that connection, that real relationship. In a very short time, this has become a key component to their success.”

Families Together vets, trains and matches volunteers with “self-identified, isolated families” throughout Colorado, including around 50 in the Denver area. Volunteers deliver meals, groceries or care packages — traditionally, in person, but now under pandemic safety guidelines — and are encouraged to forge a bond with their families by regularly sending “encouraging notes” or talking on the phone.

Pairings officially last about six months, but often lead to relationships that endure. Escalante still talks on the phone with her original volunteer neighbor, who regularly sends gift cards to help out with groceries.

The benefits aren’t confined to recipients of the program’s goodwill, said Annette Falkman, who started as the Escalantes’ Families Together neighbor in May.

Falkman had been donating her time in person in the community before the pandemic, but when things started to shut down and the true risks became known, she didn’t want to do anything that might compromise the health of her 96-year-old father, who lives with her and her husband, Craig, who has COPD.

“Both of them are at high risk, but I still wanted to do something to continue helping out, something that I could do during COVID but still be safe,” said Falkman, who’d previously done social work and served as a resource for families.

When a notice seeking volunteer neighbors for Families Together popped up on her Facebook page in April, she thought it sounded perfect.

“This was something that I could do, and I love doing it,” Falkman said. “Most of my career has been working with teens. I know teens, and I love teens, so I’m always trying to think of what kids would want to eat.”

In the past, she’s brought pizza and fried chicken, and made some casseroles. On this Wednesday in November, it’s Mexican food with mole sauce, plus salad and store-bought cookies.

“I don’t always love to cook, but I love to cook mole,” Falkman said. “My brother came today and I made a big batch of mole, and just had a fun day in the kitchen. I love that this gives me the chance to share that.”

For more about Families Together and Tennyson Center for Children in Colorado Springs, visit familiestogether.co

Serving as both inspiration and reminder, there’s a saying among the staff and volunteers at the Springs Rescue Mission in Colorado Springs: