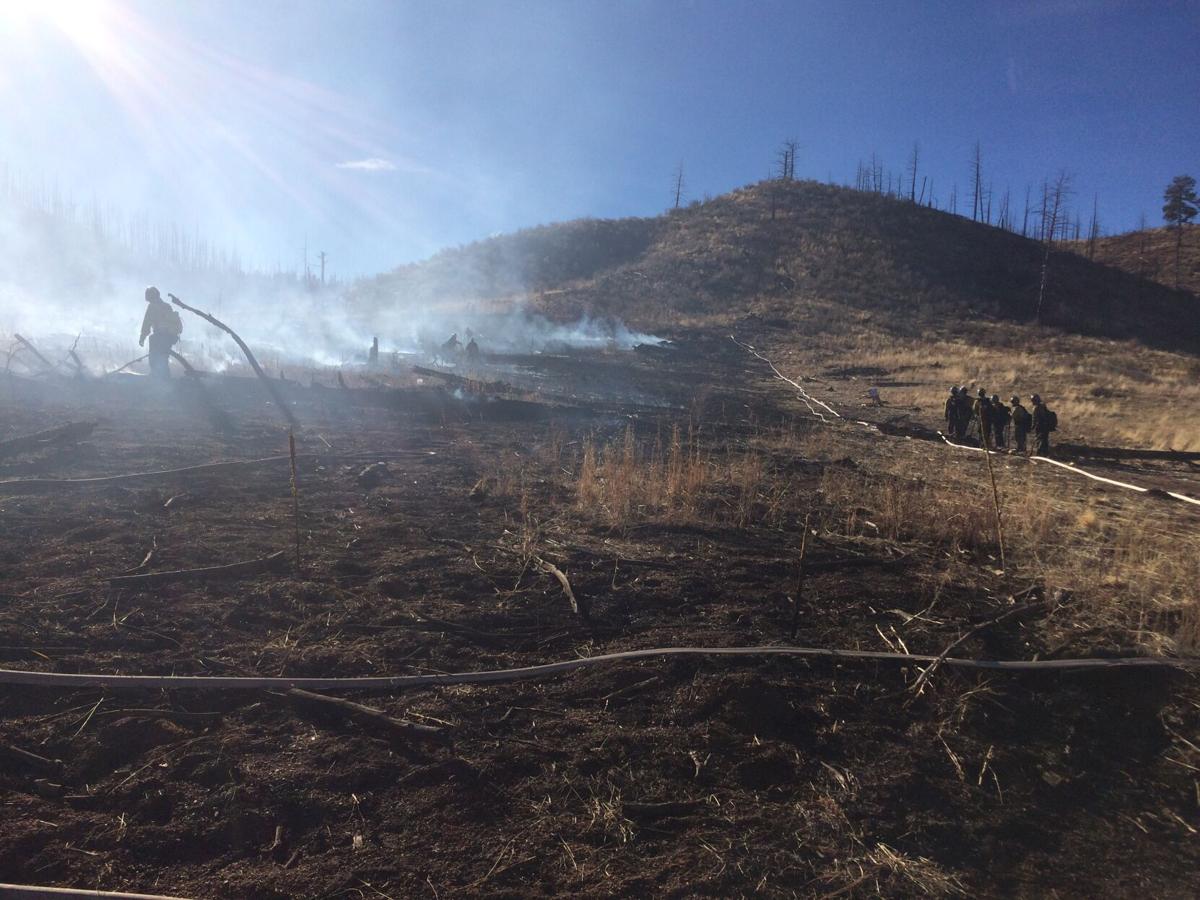 Crews put out a fire at the area known as Turkey Tracks off Colorado 67 north of Woodland Park. Fire has been one increasing concern with increased target shooting at the area. 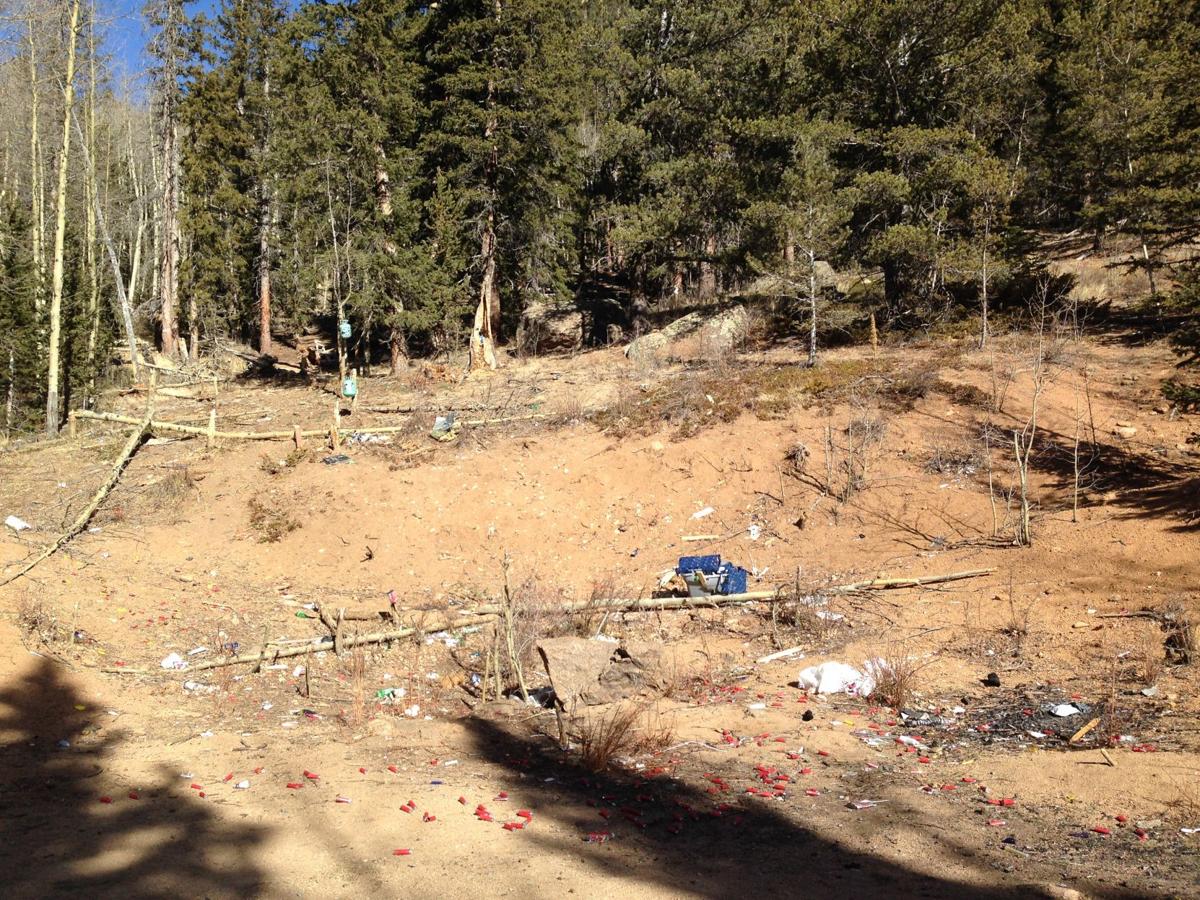 Evidence of improper shooting practices along Gold Camp Road in Pike National Forest. Bullet casings and targets litter the ground and trees stand destroyed by shooting, some whittled down to stubs.

Crews put out a fire at the area known as Turkey Tracks off Colorado 67 north of Woodland Park. Fire has been one increasing concern with increased target shooting at the area.

Evidence of improper shooting practices along Gold Camp Road in Pike National Forest. Bullet casings and targets litter the ground and trees stand destroyed by shooting, some whittled down to stubs.

Last summer, the volunteer fire chief overseeing lands along the Teller and Douglas county line received word of "dragon's breath" in a place of frequent trouble.

"I'd never heard of it," Steve Brown recalled. "It's like a shotgun that shoots fire out."

Crews extinguished yet another blaze on the grassy hills of the U.S. Forest Service area known as Turkey Tracks, off Colorado 67 north of Woodland Park.

It is an area that has grown increasingly popular for target shooting. That has come with fires — the Forest Service reportedly responded to five in the first seven months of 2020 — and heightened fervor among locals.

Some nights "sound like a battle going on," Brown said.

Said Gary Bieske, who lives about 1 1/2 miles from the area and runs a cabin resort: "We're supposed to be out in the middle of nowhere, and sometimes all we can hear is guns going off."

But noise isn't atop the fire chief's fears.

Homes, roads, trails and campsites are in potential range of stray bullets, Brown said. "My biggest concern is health and safety."

As it is for the Forest Service, which at the start of this year announced a broad effort to control gunfire at Turkey Tracks and all across Pike National Forest.

The plan includes banishing sites where reports of "close calls" have mounted along with trash and obliterated trees — sites such as those along Gold Camp and Rampart Range roads. All the while, the idea is to designate ranges for the activity legally permitted on federal grounds.

Turkey Tracks is listed as one candidate for development.

That's partly for the current demand of the area, said Pikes Peak District Ranger Oscar Martinez. He also spoke to the "fairly large opening" and sloping backstops within this tract of the Hayman burn scar.

"The geography and terrain there actually do make it fairly amenable," Martinez said.

E-bike 101: What to know as electric cycling moves to Colorado Springs trails

Bieske worried about a funnel effect. "They'll come to Turkey Tracks instead of being spread out on the national forest," he said. "So it's gonna be that much more of an impact on us locally here."

"The way I've been talking about it is the old West and the new West," Martinez said.

The "new West" Turkey Tracks, he said, would have the kind of organization and facilities that shooters would expect at other formalized ranges.

Some have wondered about an arrangement similar to Manitou Lake, another recreation site along Colorado 67 that the Forest Service leases to a concessionaire, which staffs, gates and charges fees for upkeep. The concept could "be on the table," Martinez said.

Brown granted "probably 80%" of Turkey Tracks shooters are safe and responsible — "and then 10% or 20% are just there to go crazy."

Enforcement is needed, the chief said. "I've always found if you don't supervise an area, you get what you deserve."

As a one-of-a-kind ski area in Colorado closes on its first full season, operators continue to sound optimistic about the years ahead.