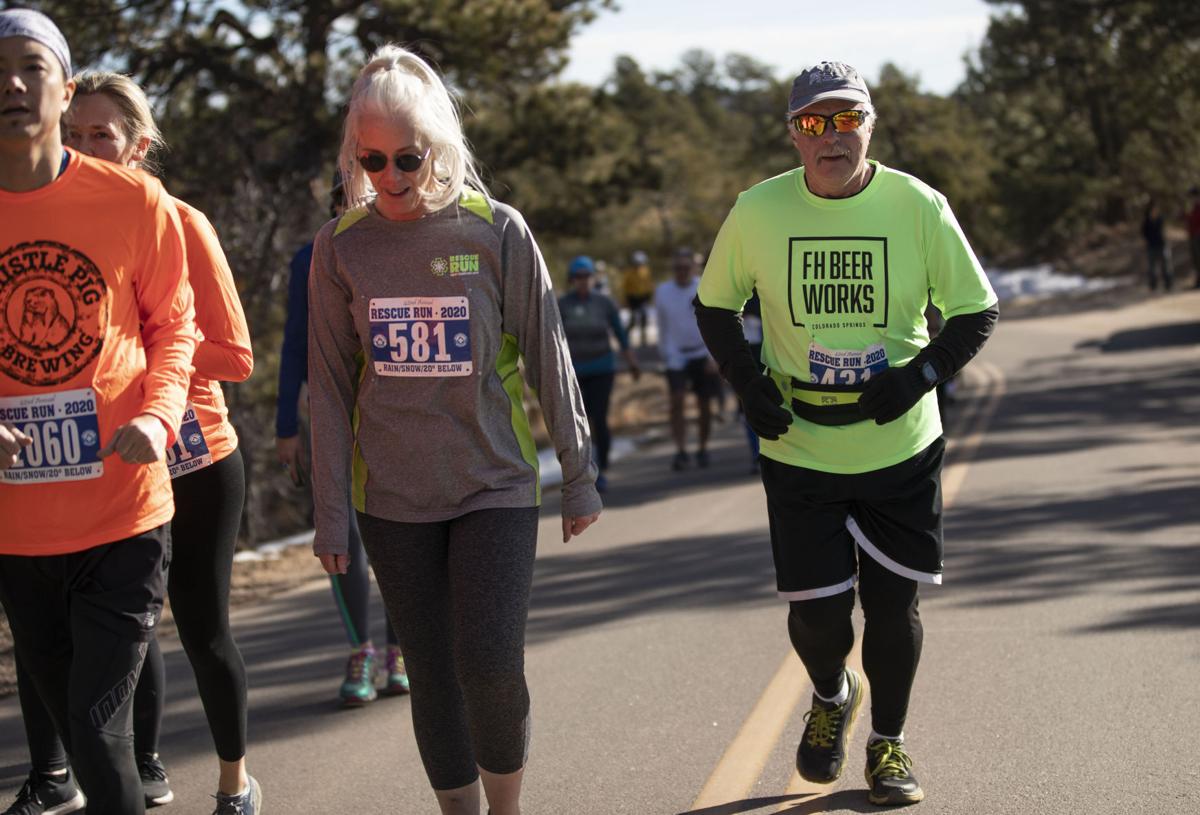 Wayne Heilman, right, competes in the 5K event during the 2020 10K and 5K Rescue Run, benefiting the El Paso County Search & Rescue, at Palmer Park in Colorado Springs on Jan. 1. The race began what Heilman hopes to be a full schedule of racing in 2020. He had a heart attack in September. 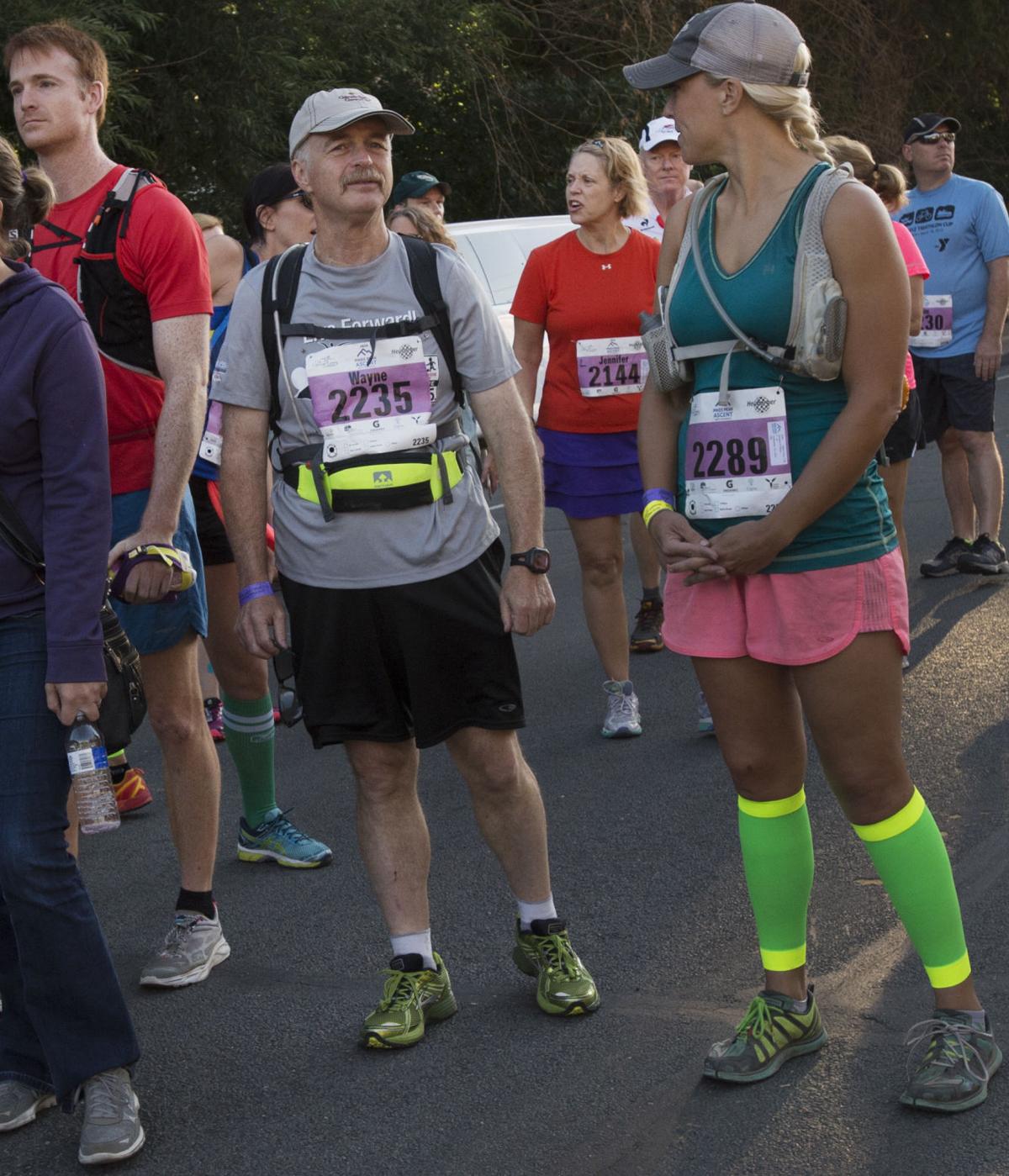 Gazette reporter Wayne Heilman waits for the start of the 2015 Pikes Peak Ascent race from Manitou Springs to the top of 14,115-foot Pikes Peak. Heilman is back running after surviving a heart attack in September.

Wayne Heilman, right, competes in the 5K event during the 2020 10K and 5K Rescue Run, benefiting the El Paso County Search & Rescue, at Palmer Park in Colorado Springs on Jan. 1. The race began what Heilman hopes to be a full schedule of racing in 2020. He had a heart attack in September.

Gazette reporter Wayne Heilman waits for the start of the 2015 Pikes Peak Ascent race from Manitou Springs to the top of 14,115-foot Pikes Peak. Heilman is back running after surviving a heart attack in September.

I had most of the classic symptoms of an impending heart attack, but barely saw it coming.

As a runner for the past seven years, I was in denial that what I was feeling was angina. Simply put, I thought I was too healthy to have a heart attack. That clearly wasn’t true and there are plenty of good examples to better runners who suffered fatal heart attacks due to lack of symptoms or failing to recognize the warning signs.

I’m thankful I wasn’t one of them. I had been feeling acute pain radiating down my left arm, shortness of breath and dizziness for two weeks, but blamed it on overdoing weight training in the wake of a 2018 shoulder surgery. By the day before my heart attack, I admitted to myself it was angina and called a cardiologist friend, who set me up for a stress test two days later.

I didn’t make it that far — I had my heart attack the next day, Sept. 29. My friend told me to go to the emergency room if I felt angina at rest. That didn’t happen until about 10 to 15 minutes before the heart attack (during a sermon at church). However, I didn’t go directly to the hospital as I should have. Instead, I went downstairs to hang up my choir robe and put away my music before climbing the stairs to go home.

I needed help to make it up the last few stairs and into a chair. It was clear at that point that I needed immediate medical attention. I yelled for fellow choir members to call 911, and the church security guard, a retired Army medic, immediately began providing aid until the EMTs arrived five minutes later.

I remember focusing on breathing so I didn’t stop breathing or lose consciousness. The EMTs kept asking me my name and age, presumably to keep me awake and not because they didn’t already know the answer. We arrived at Memorial Hospital Central quickly (the trip seemed longer than it was) and the cardiologist on duty, Dr. Chris Manhart, told me I had a 100% blockage of the left anterior descending artery (known as the widowmaker).

I was wheeled up to the cardiac catherization lab within an hour of the heart attack and Dr. Manhart performed an angioplasty and put in one stent coated with blood thinner drugs to keep the artery from becoming blocked again.

The relief was immediate, but I didn’t realize it until the anesthesia wore off; I was pretty groggy until late in the day (my heart attack happened just after noon).

I realize how lucky I am to still be alive. The widowmaker nickname comes from the fact that a blockage of the left anterior descending artery is often fatal. I had several risk factors that contributed to my heart attack — heredity (my father had a blockage in the same place two years ago); poor diet (too much fat, sodium and high-cholesterol foods leading to being overweight); and stress (both at work and at home).

But I also had a few positive factors that helped me survive — I was generally healthy because I run (and knew how to breath even when it is difficult) and I got care quickly (I was in the cardiac catherization lab in less than an hour).

My wife, Donna, pointed out how lucky I was in the hours after my heart attack. She pointed out that had I not withdrawn from the Pikes Peak Ascent due to skin cancer surgery (the surgeon was concerned about the wound reopening during training), my first symptom of heart trouble might have been a fatal heart attack during the race. Looking back, I realize my training for the Ascent was regressing, likely because of the blockage. My first symptom likely was that I struggled in the summer of 2018 while climbing Quandary Peak (I have done 11 other 14ers).

I was ready to take on recovery almost immediately — I took a short, unauthorized walk that night. I immediately started walking in my neighborhood and was up to 10,000 steps a day by the time I started cardiac rehabilitation on Oct. 18. That didn’t come without a scare — I took a wrong turn near my neighborhood and ended up on a steep hill that triggered chest pain before I turned around. That taught me to boost my distance and intensity bit by bit and not by leaps and bounds as I am prone to do. I also made a mistake boosting my distance from 3 to 5 miles in a Dec. 1 run and spending time in a hot tub (which nearly caused me to pass out due to low blood pressure).

I was jogging lightly within a week or so of cardiac rehab and ran my first post-heart-attack race on Nov. 2 — the 2-mile Nielsen Challenge in Monument Valley Park. I would run a second race, the 3.1-mile Turkey Trot Predict, three weeks later. Both were approved by my cardiac rehab therapists, who didn’t have many concerns about my recovery and took me off the EKG monitor after about two weeks.

I finished cardiac rehab on Dec. 23 and I am back running with the Garden of the Gods Social Runners twice a week and Roscoe’s Runners once a week. I am up to 3.5-5 miles per training session and am able to run up virtually all hills in Garden of the Gods Park (I haven’t run many trails this time of year because we start at 6 a.m. and I don’t want to run trails in the dark, even with a headlamp).

I plan to run a full schedule of races in 2020 with my FH Beerworks Brewer’s Cup team; I started with the Rescue Run on New Year’s Day. My big goal — I am entered in the Colorado Springs Half Marathon on Sept. 26 (three days before the first anniversary of my heart attack) and I am hoping to run it in a time that will requalify me for the Pikes Peak Ascent (I missed a qualifying time in 2017 by just 28 seconds, but I didn’t need it since I had completed the Ascent in 2015 and 2016). I’m betting that I will be pretty emotional at the finish line whether I make that goal or not.

Health-themed classes, lectures and events in and around Colorado Springs.