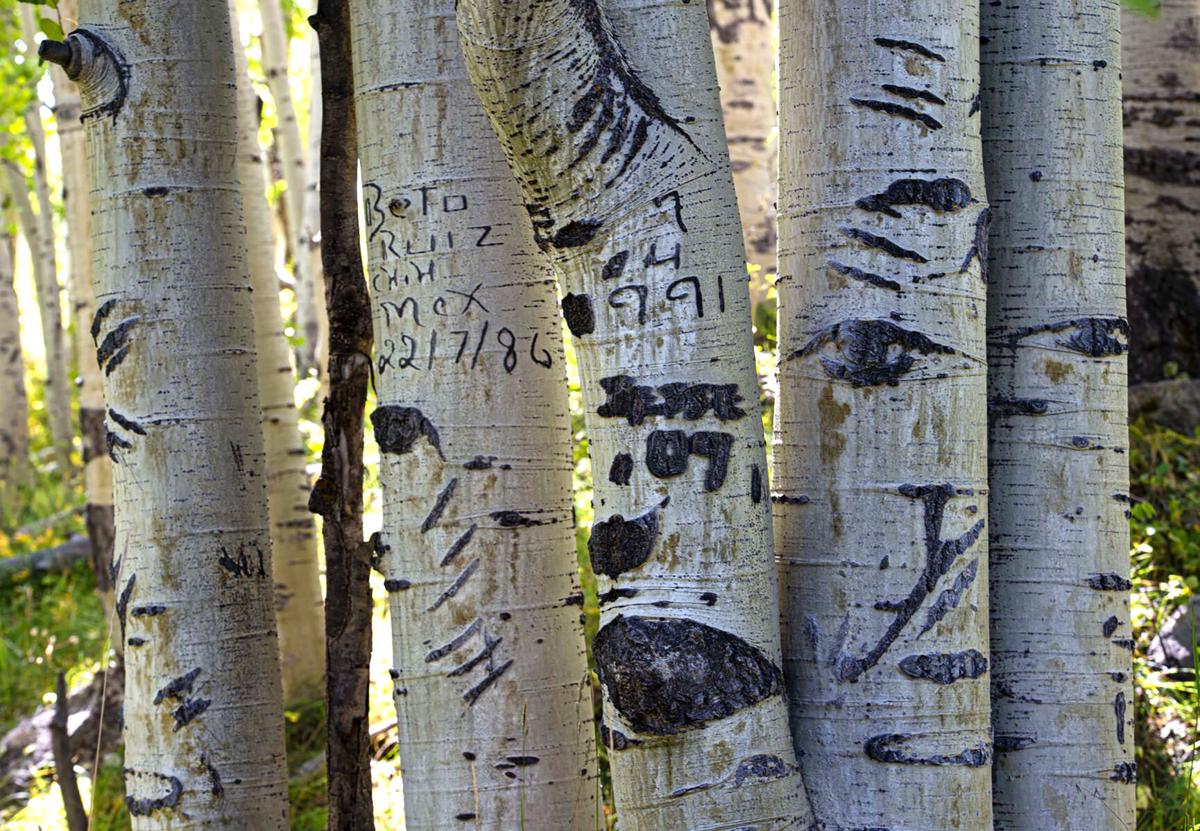 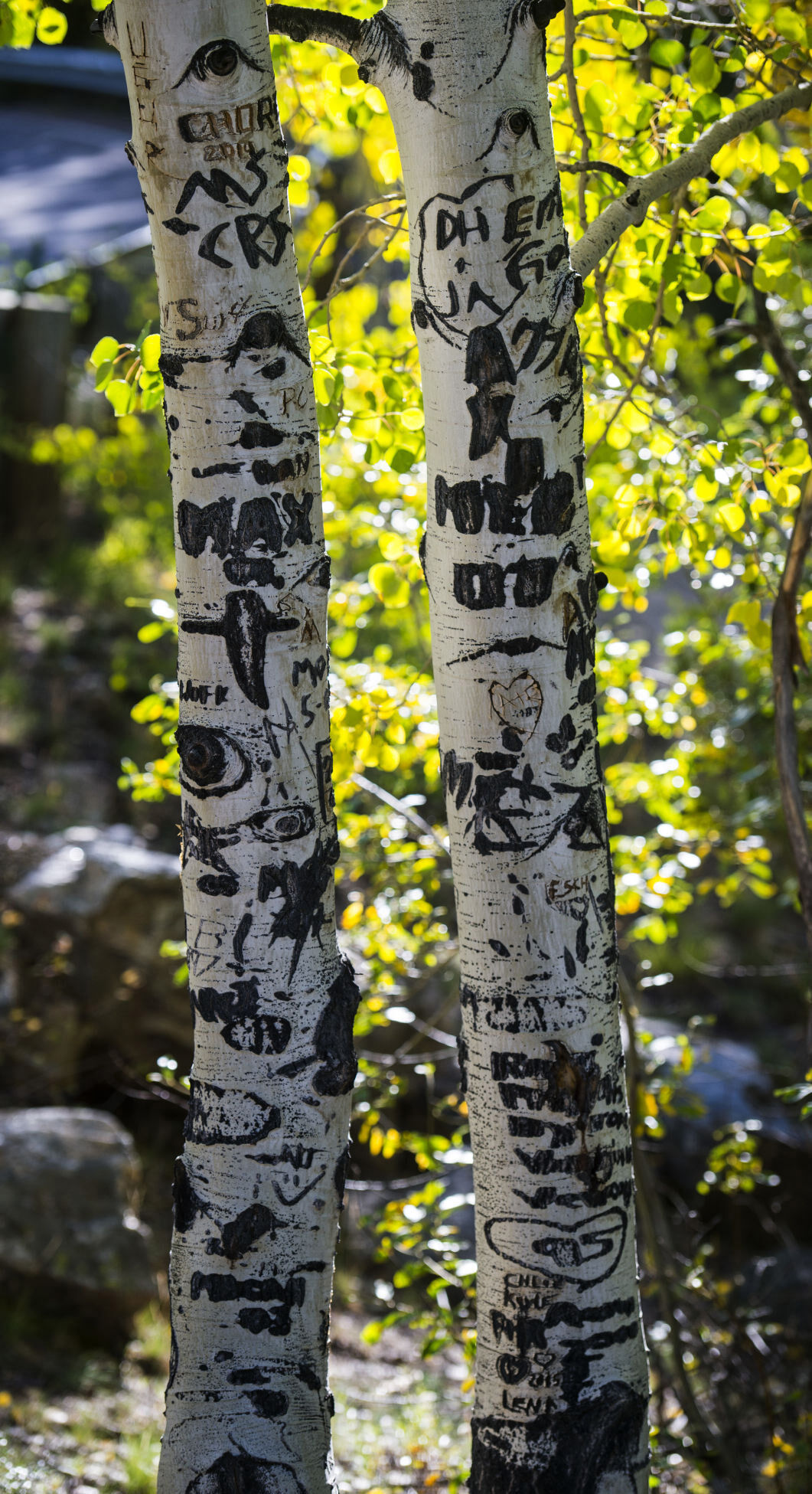 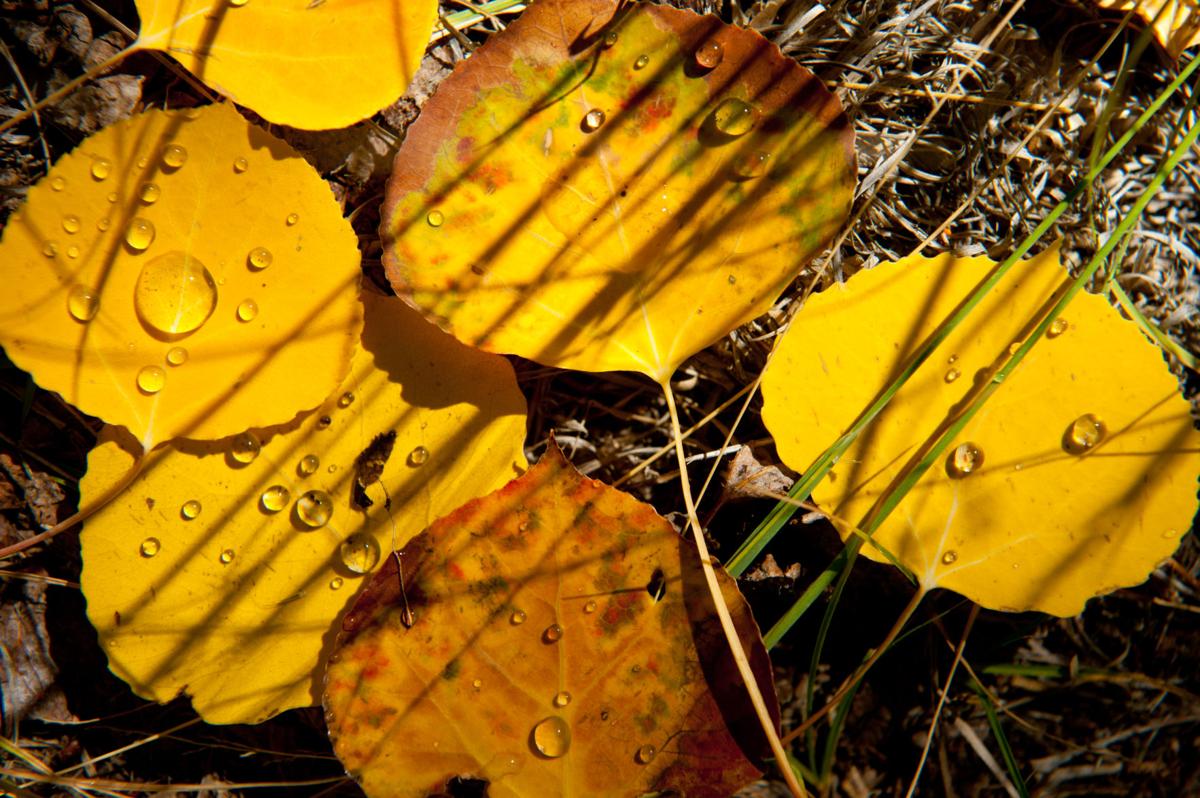 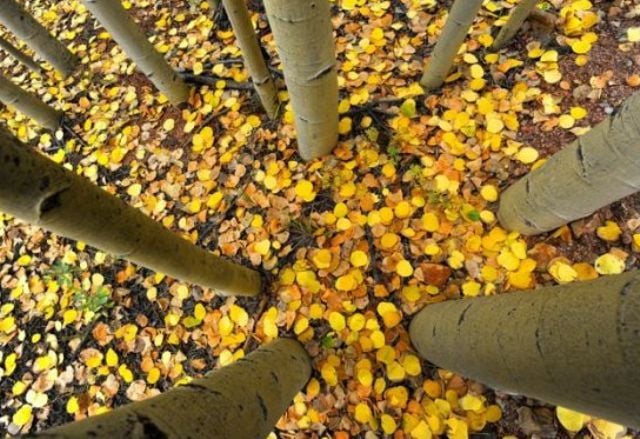 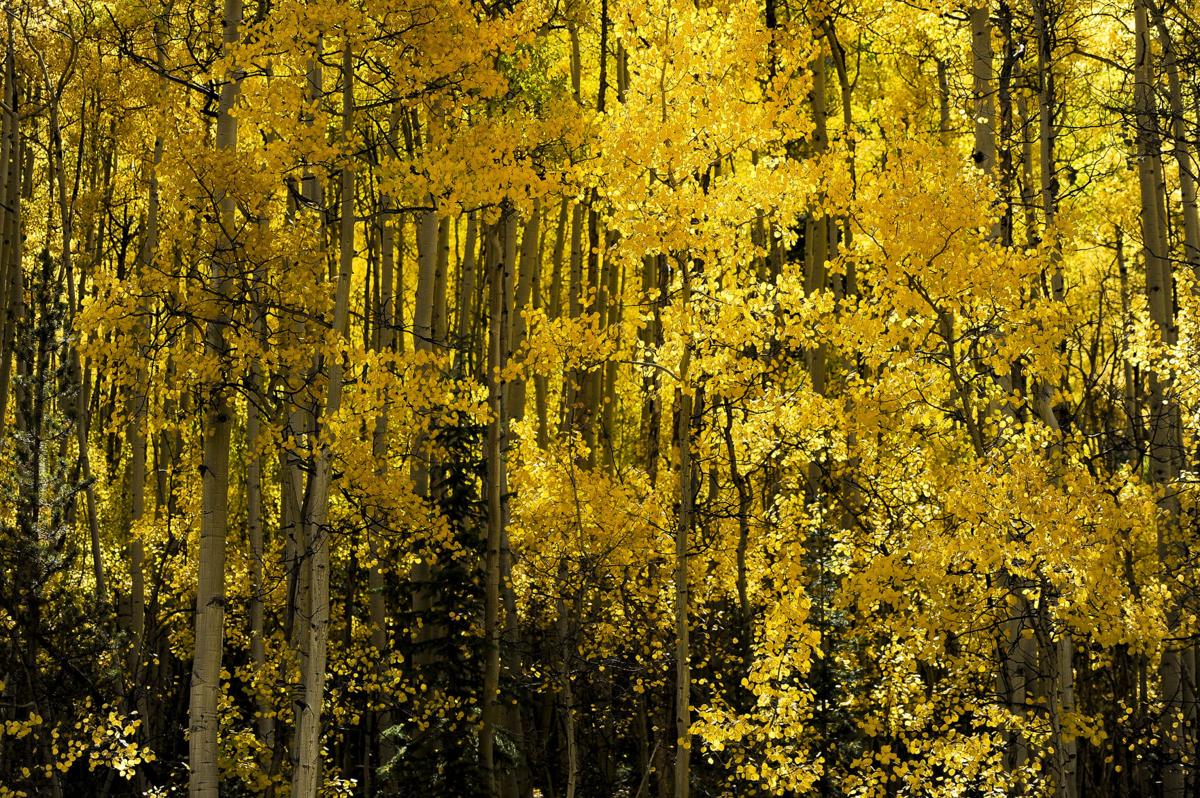 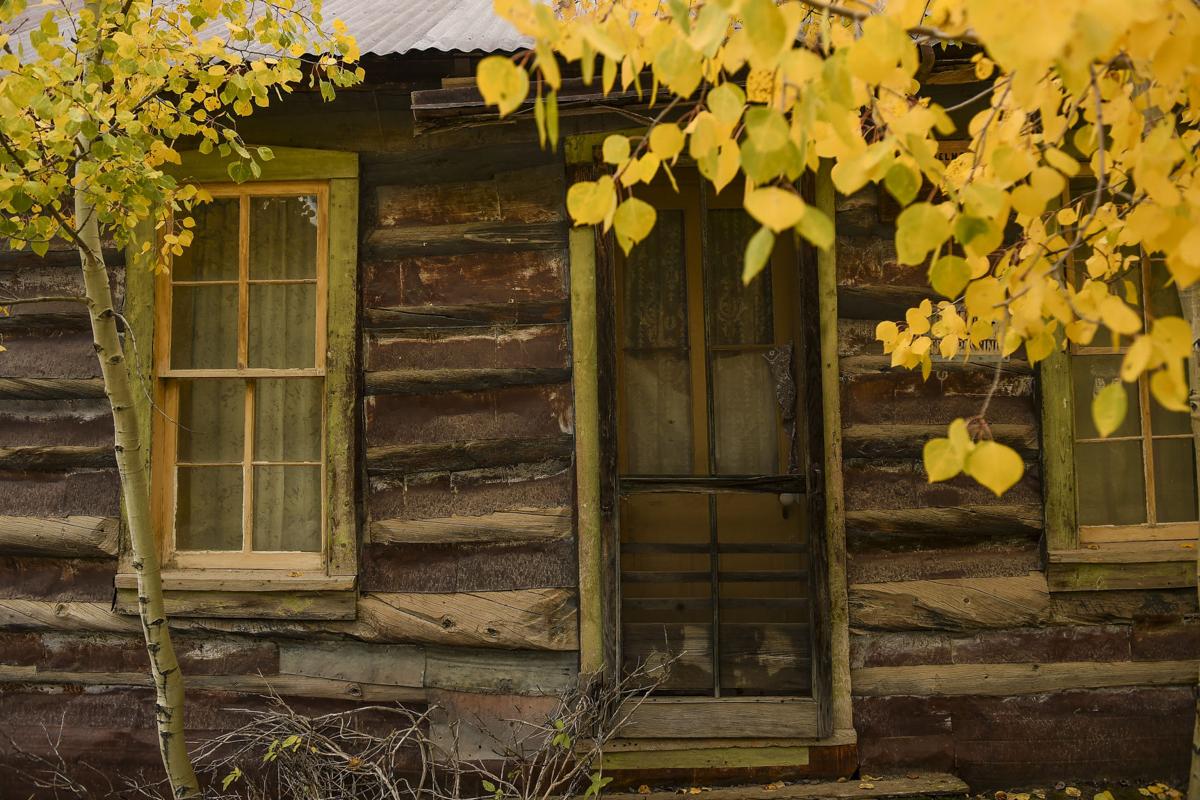 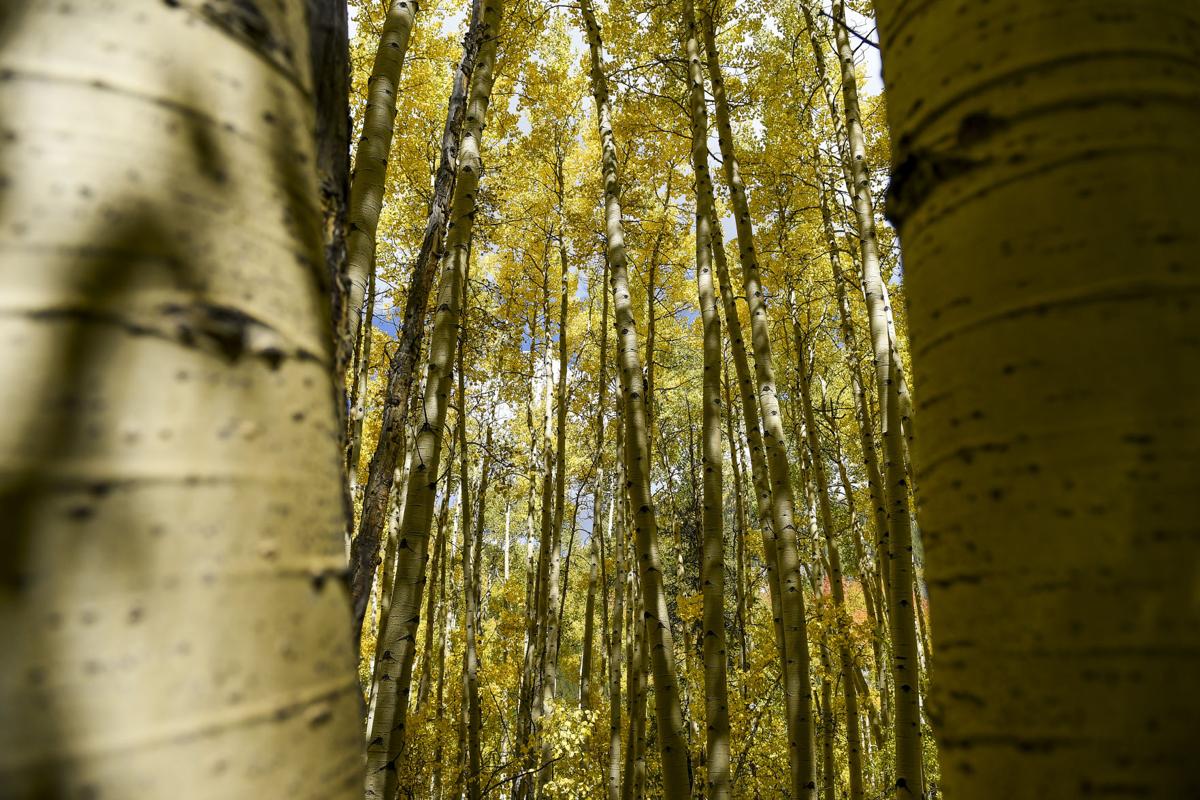 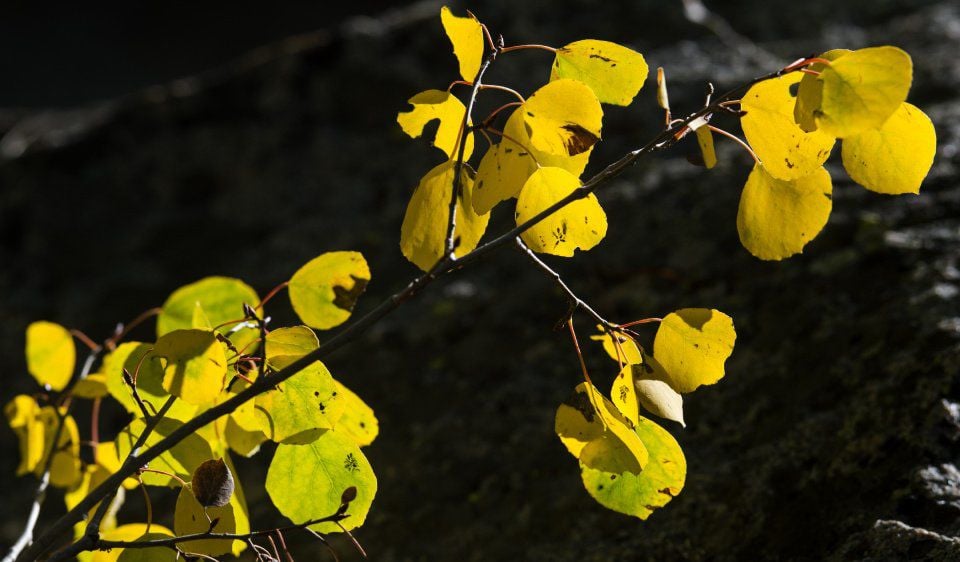 To carve an aspen tree — to take a blade to the trunk for the sake of your initials, for example — is to do harm. Harm to a being with a life expectancy much like our own: 100 years, if we’re lucky.

To leave your mark, “it may sound cool,” says Dan West, an aspen expert with the Colorado State Forest Service. “But that tree might not survive because of what you’re doing.”

A cut to the human arm is a possible portal for infection. Same for an aspen tree. Though the risk might be greater in aspen, considering “aspen are one of the most diseased and infected trees in North America,” West says.

Otherwise, yes, a wound to our body is much like a wound to Colorado’s favorite tree of autumn.

On our travels to behold the golden displays, we’ve all seen it. Gashed groves. White bark disrupted by black scars that look nothing like nature’s doing.

Paul Rogers, director of the Western Aspen Alliance based at Utah State University, came by this one once. A harsh revision was made — an “X” over “Megan” and a message above: “MEGAN IS A SKANK.”

“It didn’t work out over time, their relationship, apparently,” Rogers says.

But the advocate scientist cares not for such drama. Nor do the trees care for our drama and whatever vain impulses lead us to scarring their skin.

Aspen bark is not like the bark of a pine tree or Douglas fir or any other conifer. These white trunks don’t have that protective, rough shield. Maybe you’ve noticed even your fingernail can penetrate, easily breaking that green layer of chlorophyll, which is scrumptious to many creatures, including a slew of beetles.

Along with them, there are other invaders.

“Aspen have a lot of pathogens out there ready to eat them at a moment’s notice,” says Jonathan Coop, a professor of biology, environment and sustainability at Western Colorado University.

An opening in the bark is an opening for fungi. There the fungi might make a home while the aspen skin does what human skin does in defense: the bark closes itself.

“By closing that wound over, if there are any fungal spores inside, all that does is seal the fungus inside the tree,” West says. “And then the tree might end up with a canker.”

We know the pesky and painful canker sores in our mouth. Aspen trees know other cankers. The sooty-bark canker is fatal among the elderly. The cryptosphaeria canker has been found to be deadly as well.

The black canker presents itself “often with flaring,” reads a 2011 U.S. Forest Service report, which includes a photo example: a splayed trunk, as if the victim of a shotgun. Another photo attached to the report shows a cytospora canker and what appears to be red blood pouring around it.

But there are far bigger threats to aspen than our human tendency of cutting.

There is, for one, our tendency of baking the climate with greenhouse gases. Scientists have pointed to global warming for an influx of pests and pathogens and for this century’s sudden aspen decline, marked as an historic moment of widespread mortality.

Also, across the Rocky Mountains, there are massive swaths that “elk have been hammering winter after winter,” Coop says. And “the bigger issue is the elk are also browsing the sucker shoots,” he says, meaning the young. “They can prevent those stands from regenerating.”

It’s something Rogers at the Western Aspen Alliance has dedicated much of his professional time to. “This is the situation at Pando,” he says, referring to what is considered the largest aspen organism in Utah and anywhere else.

“If every (aspen) that comes up is getting eaten to the ground or the top is getting eaten off, it never progresses. And over time, you start to see generations drop out where you just have the mature trees and don’t have anything else to replace it. That’s the situation that many places in the West are in now.”

It’s a threat to the larger ecological balance of the region; aspen account for some of the most biodiverse forests out there, benefiting a vibrant array of plants and animals.

And “it really is a human problem,” Rogers says.

Solving it will take not only wildlife managers but owners of public and private lands, he says. He says it will take teamwork. It will take investments and sacrifices. “Management that we’re not used to,” Coop says.

As it is to solve our climate crisis, it will take caring. Caring more than we have apparently.

How to preserve aspen leaves

1. Gather leaves on a sunny day, after the dew has dried. Choose leaves with no blemishes.

2. Press your leaves shortly after gathering, before they dry out.

3. Place leaves between two layers of paper towels and then press them between two large books. Repeat this, depending on the number of leaves you have gathered.

4. Stack the books with the leaves pressed between.

5. After two days, change the paper towels and restack the books, allowing the leaves to press another five to eight days.

6. Mount the dried leaves in a photo album or between acetate or cellophane sheets.

• Use the light at sunrise and sunset to backlight the trees and help you catch sunlight glittering on the leaves.

• Use blue sky with some white or gray clouds for contrast.

• Use a tripod. Be patient.

• Try close-ups of leaves and bark.

Aspens make up about 20% of Colorado’s forests and usually are found between 6,900 feet and 10,500 feet in elevation.

Here are a few suggestions for areas to explore from the safety of your own vehicle:

• If a long road trip is out of the question, stay local and enjoy the drive up Old Stage Road in southwest Colorado Springs, an old logging route with a rich history and a wealth of aspens. Four-wheel drive is a plus, but passenger vehicles will be able to make it a good distance.

To get there: From Interstate 25 south of downtown, take exit 138, Circle Drive. Go west and Circle Drive will become Lake Avenue. At The Broadmoor hotel, take the traffic circle onto Lake Circle, which becomes Portales Road. Veer right onto Mirada Road, which wraps to the west, becoming West Cheyenne Mountain Boulevard, then Old Stage Road.

Within a few hours’ drive:

• Few will forget an autumn tour of the Highway of Legends Scenic Byway in southern Colorado, though getting there will be a time investment. Head south on I-25 to Walsenburg, then head west on U.S. 160 and branch off on Colorado 12 at La Veta. The 82-mile route will return you to I-25.

• Enjoy the lovely route between Breckenridge and South Park via Boreas Pass at 11,492 feet. Take Forest Service Road 33 from U.S. 285 at Como in Park County or Boreas Pass Road in Breckenridge.

• For another classic, head to Kebler Pass near Crested Butte. Head west out of Crested Butte over County Road 12, an improved dirt road, and be surrounded by aspens and breathtaking vistas. At Colorado 133, you can head north toward McClure Pass for more or return the way you came. For a shorter day, stick to Colorado 135 between Crested Butte and Gunnison.

• Independence Pass, one of Colorado’s higher paved roads, provides sweeping views of aspens. Colorado 82 is normally open until Nov. 1 but could be closed early because of weather.

Utah has claim to largest aspen clone, but maybe it's in Colorado