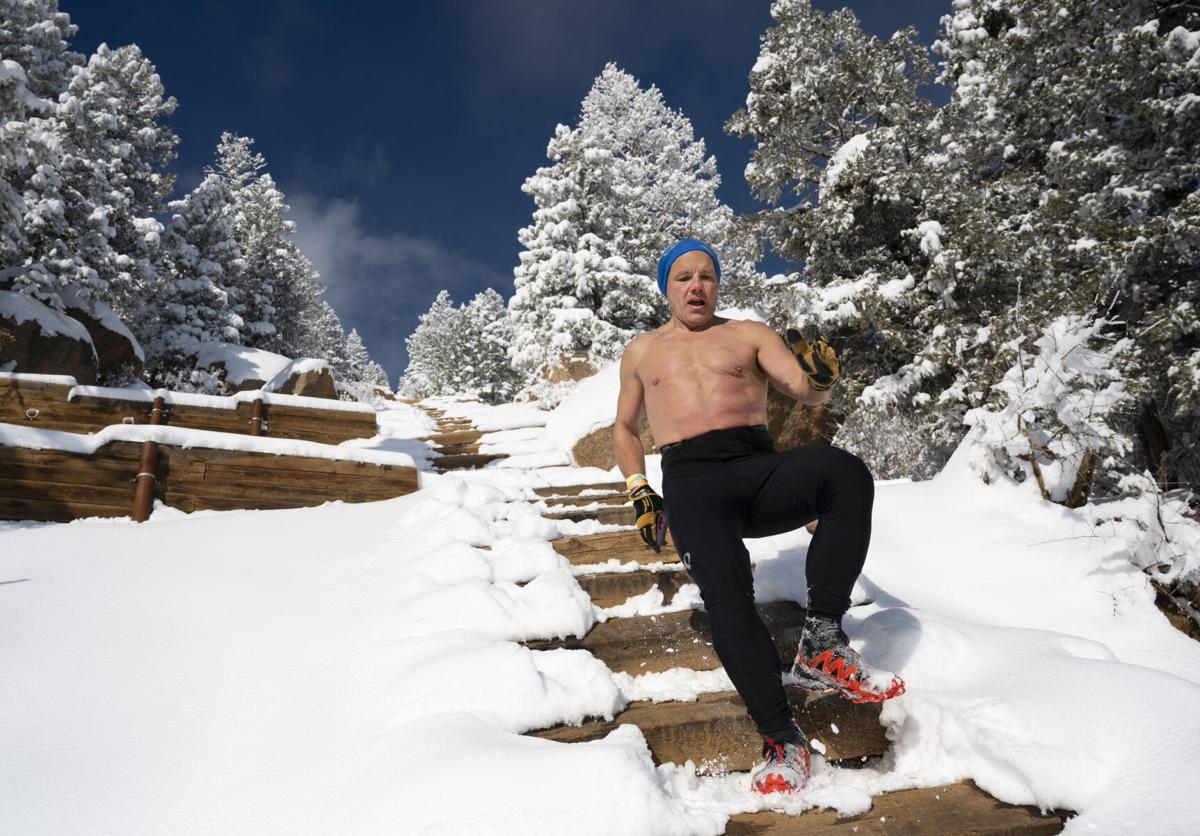 Bob Stuka, also known as Crazy Bob, races down the Manitou Incline on Thursday morning last week. Stuka says he has the record for the 2,000-foot descent in 7 minutes and 35 seconds. 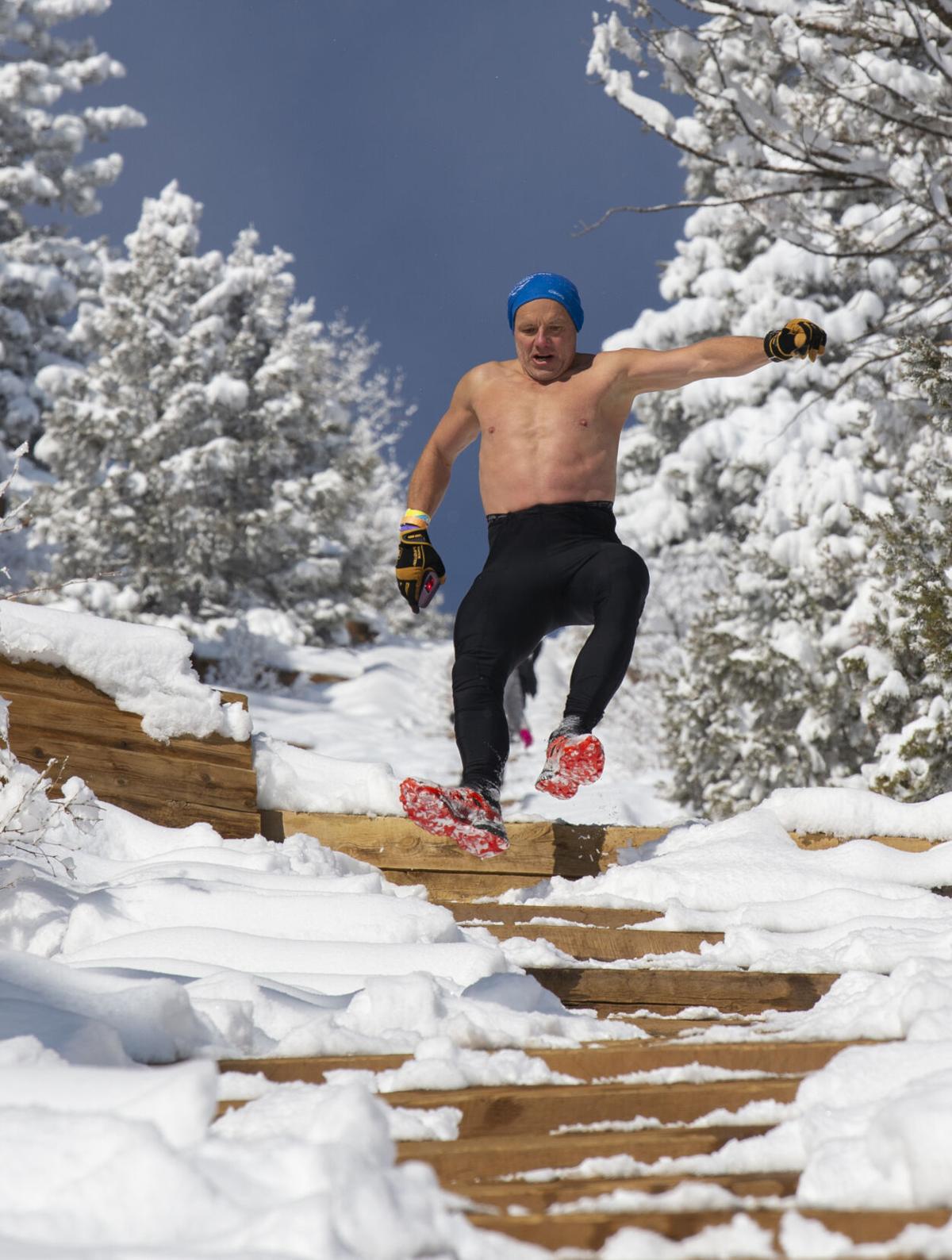 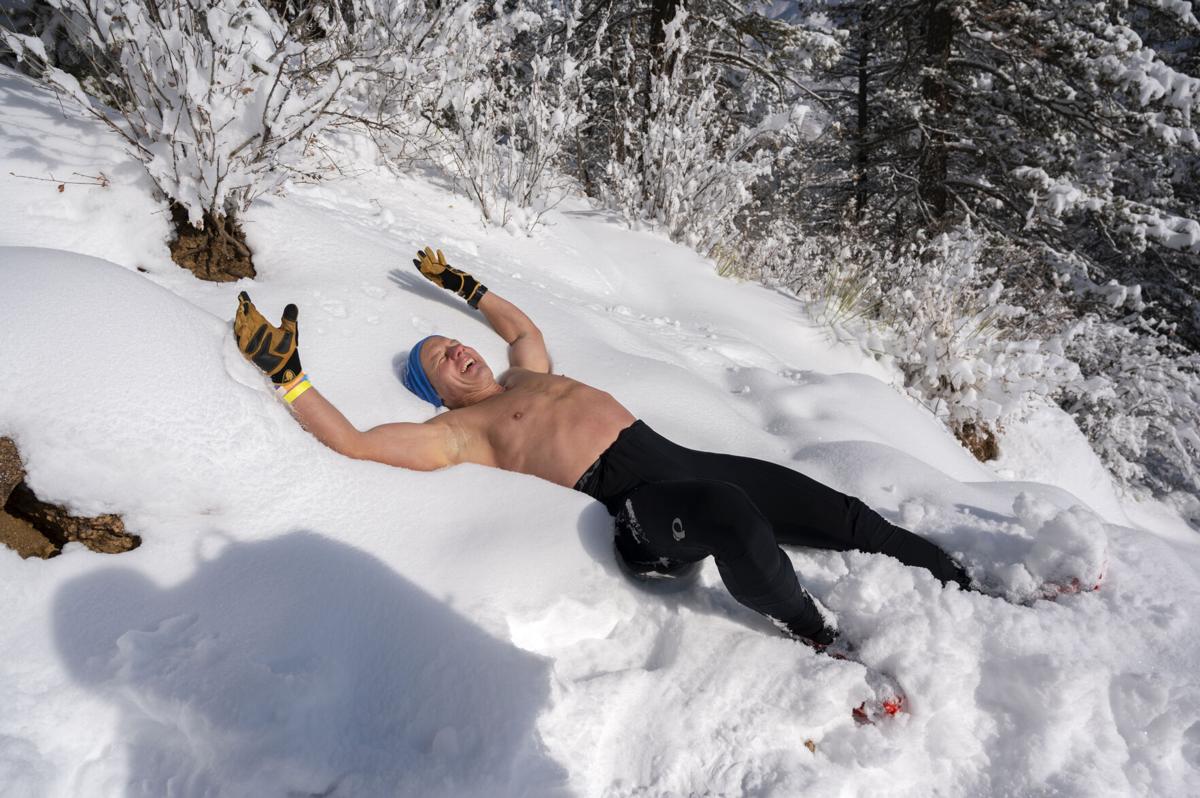 Bob Stuka, also known as Crazy Bob, cools off in the snow after stopping half way down the Manitou Springs Incline to talk to other hikers Thursday morning, Feb. 18, 2021. Stuka says he run the 2,000-foot decent in 7 minutes and 35 seconds. (The Gazette, Christian Murdock) 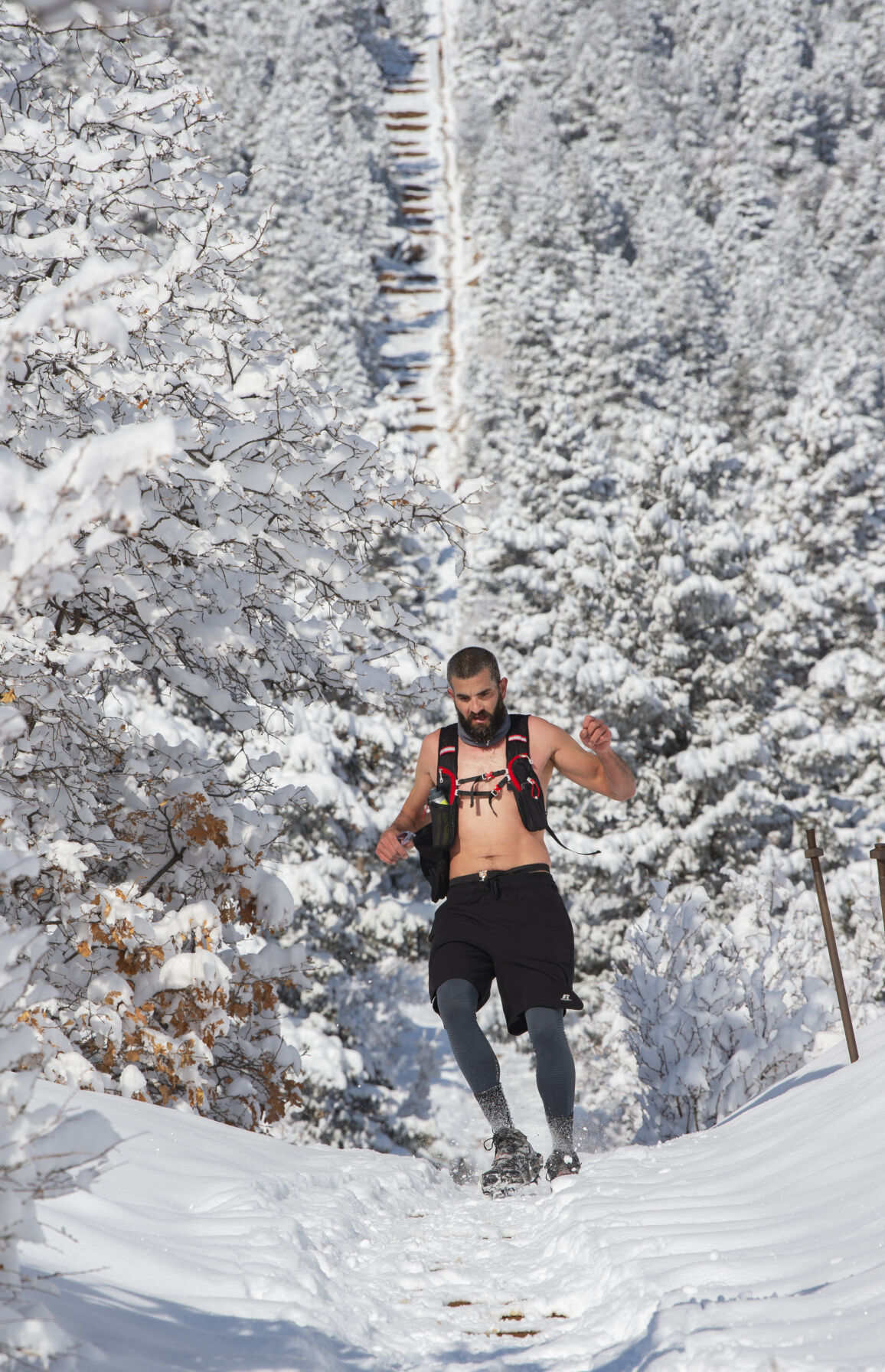 A hiker runs down the Manitou Springs Incline in the snow on last Thursday. Most people who climb the Incline hike down the safer route Barr Trail, but others race down the steps with an average grade of 40% and parts as steep as 68%. 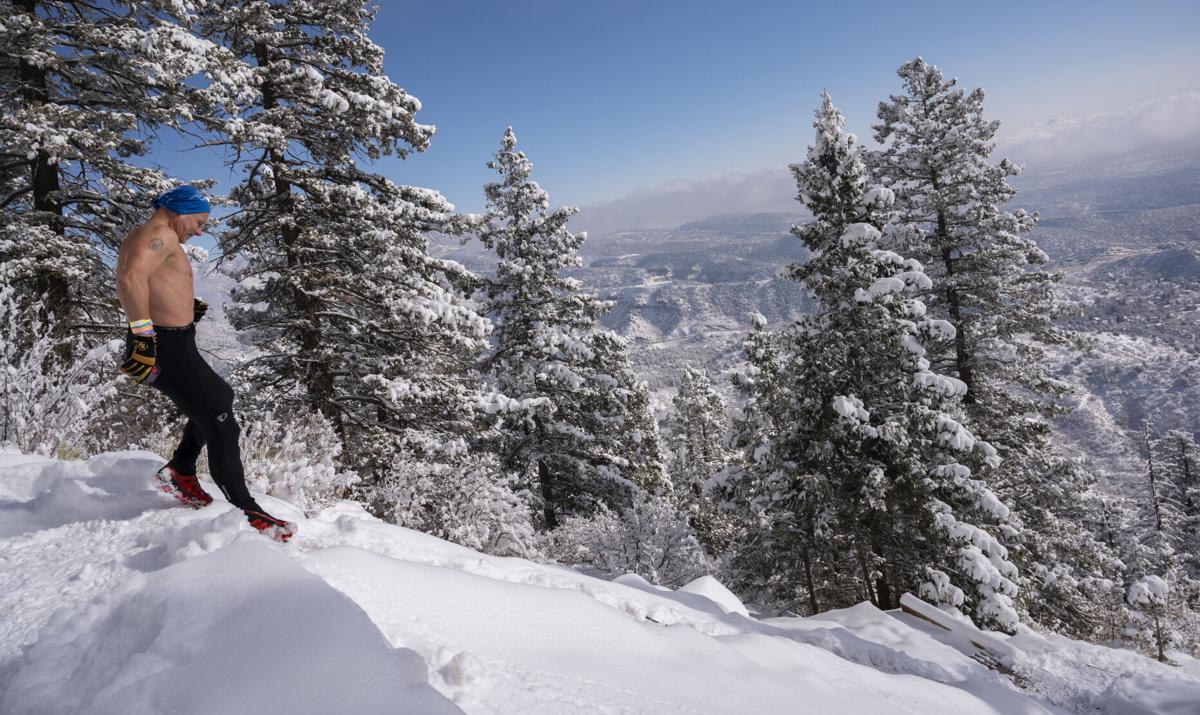 Bob Stuka races down the Manitou Incline past the bailout trail. 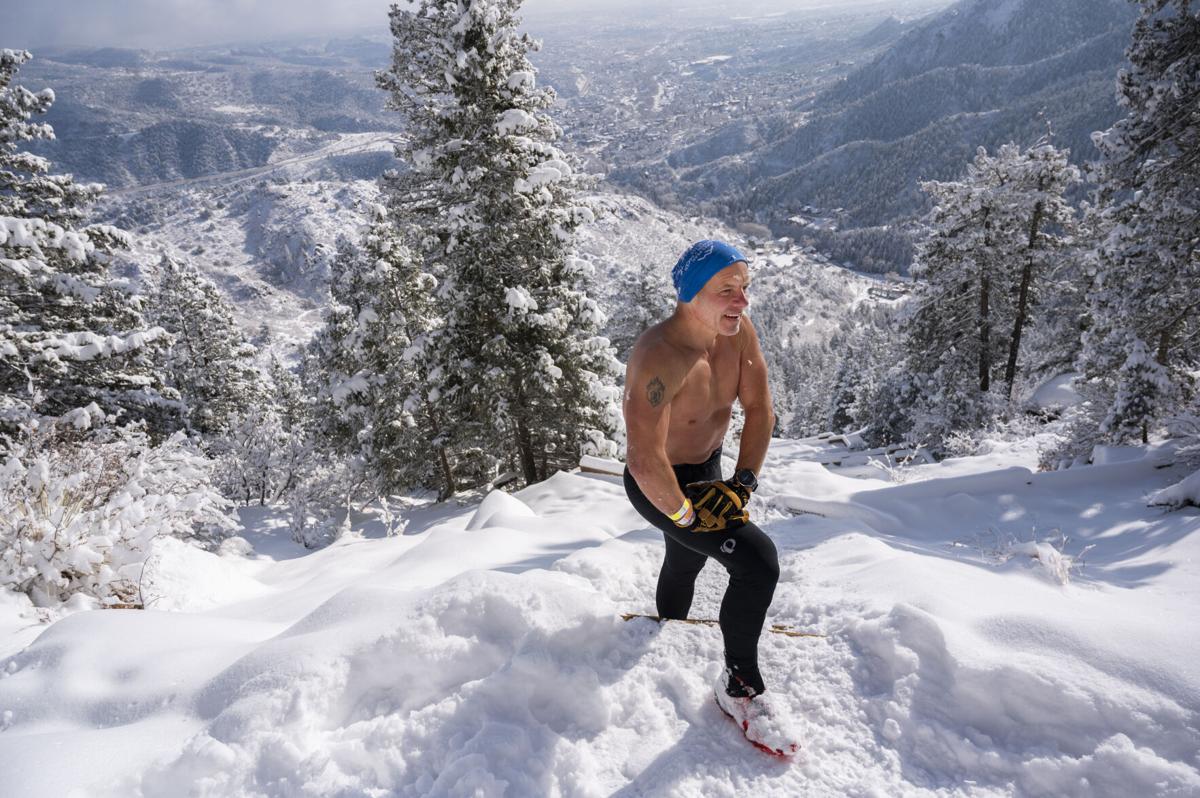 A shirtless Bob Stuka, also known as Crazy Bob, stops at the bail out trail to talk to other hikers while descending the Manitou Springs Incline Thursday morning, Feb. 18, 2021. Stuka crashed running the 2,000-foot descent and injured his ankle. He says his ankle is about 95 percent now. (The Gazette, Christian Murdock)

Bob Stuka, also known as Crazy Bob, races down the Manitou Incline on Thursday morning last week. Stuka says he has the record for the 2,000-foot descent in 7 minutes and 35 seconds.

Bob Stuka races down the Manitou Incline past the bailout trail.

A shirtless Bob Stuka, also known as Crazy Bob, stops at the bail out trail to talk to other hikers while descending the Manitou Springs Incline Thursday morning, Feb. 18, 2021. Stuka crashed running the 2,000-foot descent and injured his ankle. He says his ankle is about 95 percent now. (The Gazette, Christian Murdock)

Editor's note: This story has been corrected to reflect the record for most Incline trips in a year.

In the fall, Bob Stuka — also known as “Crazy Bob” for running shirtless no matter the weather and for a fast-trotting foreign accent heard all around the mountain — was dashing down the Manitou Incline when he slipped and tumbled.

“It was like a double flip,” he says. “And after that, my ankle looked like an elephant leg.”

He proceeded to hop down the spine of timber steps on one foot. “What a workout!” he recalls climbers remarking. “And I say, “‘It’s not just a workout!’”

Stuka considers himself back to 95% strength. And, yes, he’s back to running down the Incline — an act not uncommon. But Crazy Bob takes it to an uncommon level.

He claims a record on the Pikes Peak region’s steepest, most popular yet cultish trail: a downhill time of 7 minutes and 35 seconds. For perspective, people casually and carefully stepping down might take anywhere between a half-hour and an hour.

Where vertigo might grip newcomers atop the 2,768th step, Stuka is among a small group of fitness fanatics who see the next challenge and a thrilling bonus after the burning ascent. They’re like kids at the crest of a roller coaster.

“It’s your reward for going up,” says the salt-and-pepper bearded aficionado. “It’s the best part of it for sure.”

But Dunavin wants to make himself clear, echoing a warning of Stuka and the fellow fleet-footed: “I wouldn’t recommend anybody just go and run down.”

The Incline’s managers and advocates advise no one does. Reads one of the posts at the base: “Recommended: UPHILL ONLY! Please use Barr Trail for your descent.”

But for as long as the Incline has been used for extreme exercise — since the 1990s, after the former funicular railway ended — so it has attracted downhill renegades.

“We understand there is that niche,” says Scott Abbott, the city of Colorado Springs’ regional parks, trails and open space manager, representing the Incline’s owning entity. “It’s not a hard rule or law, but we do emphasize safety and our uphill recommendation.”

The return on Barr Trail spans a switchbacking 3-plus miles, not conducive to the efficiency that many regulars desire. They crave laps on the Incline, up and down, up and down. The trail breeds obsession, luring a driven bunch back every day in their chase for faster times and more trips to add to their annual total. (Though, the calendar year record of 1,825 appears untouchable, set in 2019 by a diabetic man who put his life on the line).

Many are like Stuka, getting in two or three laps in the dim morning hours before work. This early window is essential to downhill runs, they say, as are weekdays in the winter, by far the Incline’s least populated season.

Snow and ice be damned; nothing spikes on shoes can’t handle, they say. They have a clear path for takeoff.

“Of course I care for the people and myself,” Stuka says. “So it must be very early in the morning, to make sure nobody is there or hardly anybody. Of course I want to be careful for everybody.”

Bill Beagle hopes so. He’s the president of Incline Friends, the official stewards who keep a note about trail etiquette at the Incline’s base. It reminds of the yield-to-uphill courtesy. “Everybody play nice,” it implores. “Be courteous and careful and together enjoy the great resources we have.”

Speedy downhill traffic has “never risen to a level of serious concern,” Beagle says. “I’m not hearing any issues or complaints about it.”

But it’s easy for Beagle to imagine “a bowling ball” scenario, someone crashing into oncoming climbers. As a ski instructor, Beagle draws an easy comparison with the slopes: “It’s not just about you. It’s about others around you.”

And though she’s not aware of any downhill outcome worse than broken ankles and wrists in her two decades on the Incline, it’s easy for Jill Suarez to imagine worse.

For the city of Colorado Springs-employed patroller in the area, her concern is equal along Barr Trail.

“That’s where the majority of issues come from,” Abbott says.

The shaded corridor’s tendency to pack ice along with its rocks and roots and sheer length create more hazards, Suarez maintains. “Especially with the amount of runners and the competitive nature” of the Pikes Peak Ascent and Marathon, she says.

That’s why Suarez began skipping down the Incline in the first place, she says — she saw it as safer than running down Barr. But very few should see it that way, she says.

“When we run down the Incline, we’re trying not to do it in front of visitors, because I think it encourages a very unrealistic view of what it actually entails. It takes years and years of experience.”

It takes not only strength and balance but also rhythm, runners say. They describe an awareness of how precisely steps are arranged and certain cadences that go with them — like a dance.

They talk of “cat-like reflexes.” It’s no wonder one of the fastest is known as “the Ninja.” And a good ninja is as agile as he is concentrated.

“It’s definitely not forgiving if you’re not focused really hard,” says another one of the Incline’s descending speedsters, Daniel Sternthal.

He knows, having sprained ankles like Crazy Bob. It’s the cost of the thrill, downhillers say. And of the competition.

Stuka says he recently heard from the next-fastest, seconds away from his record.

“He sends me a text message a couple of weeks ago: ‘I’m ready for you,’” Stuka says. “I know what he means.”