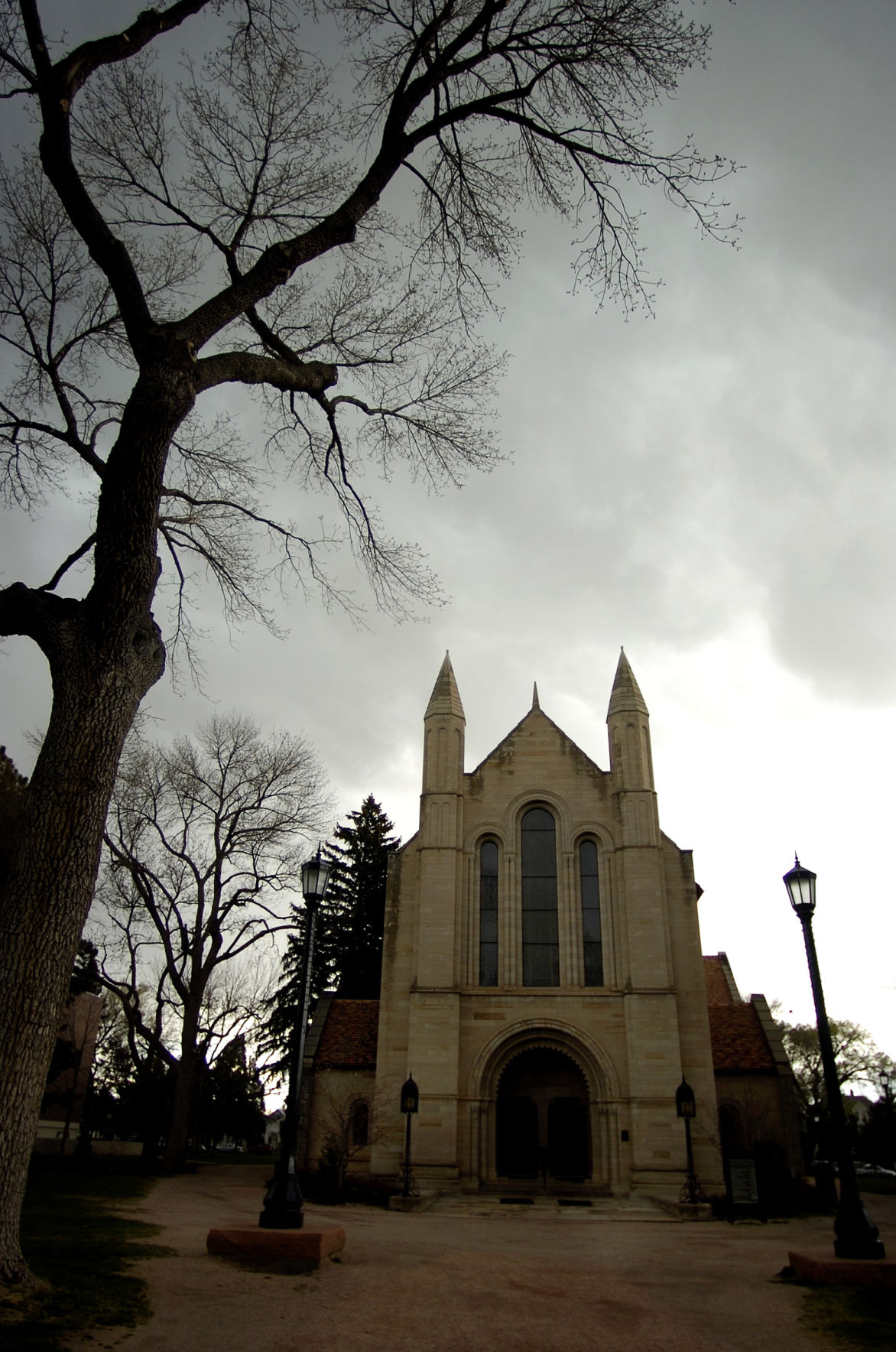 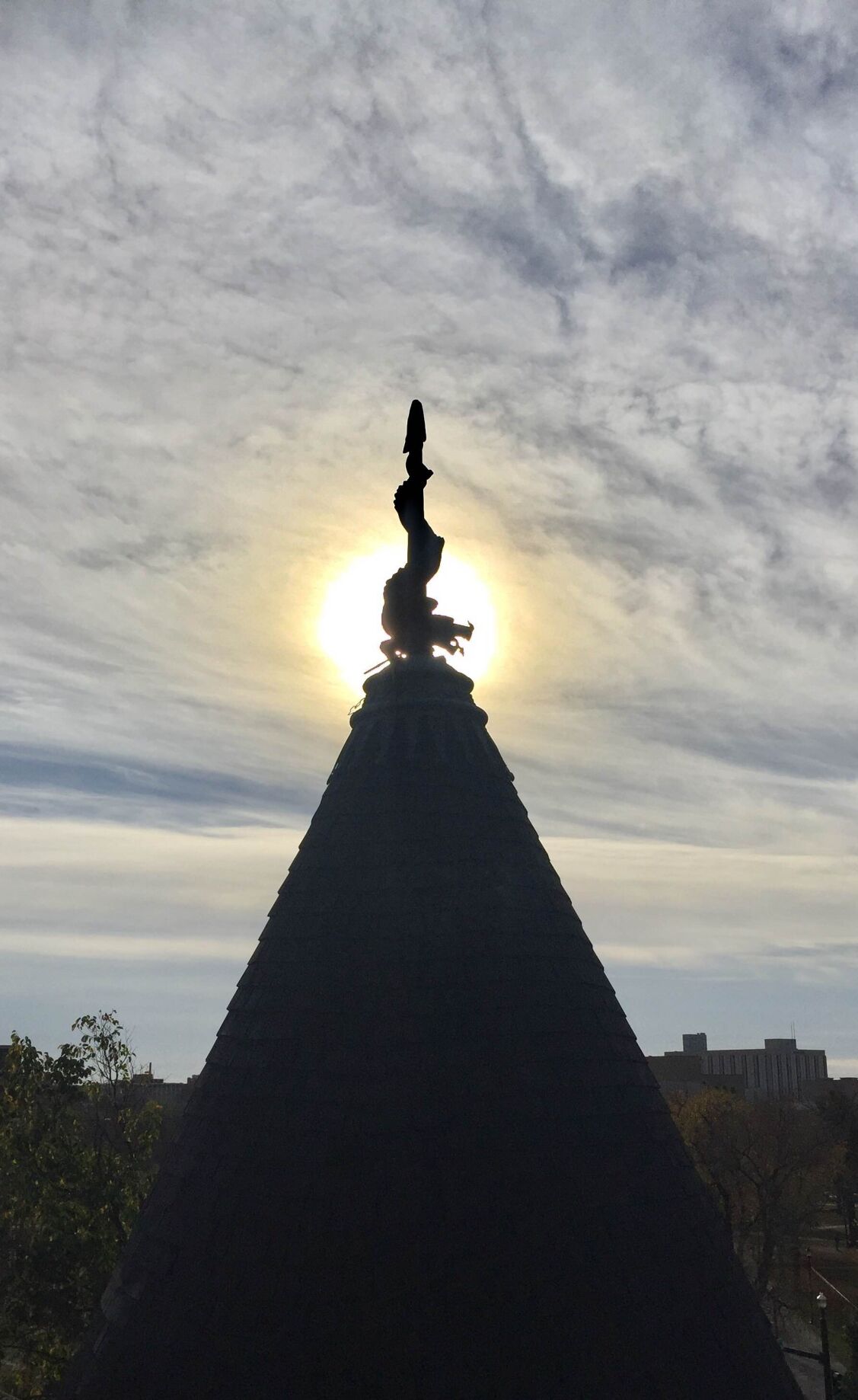 A dragon finial perches atop the El Paso Club in downtown Colorado Springs. 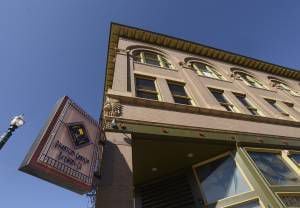 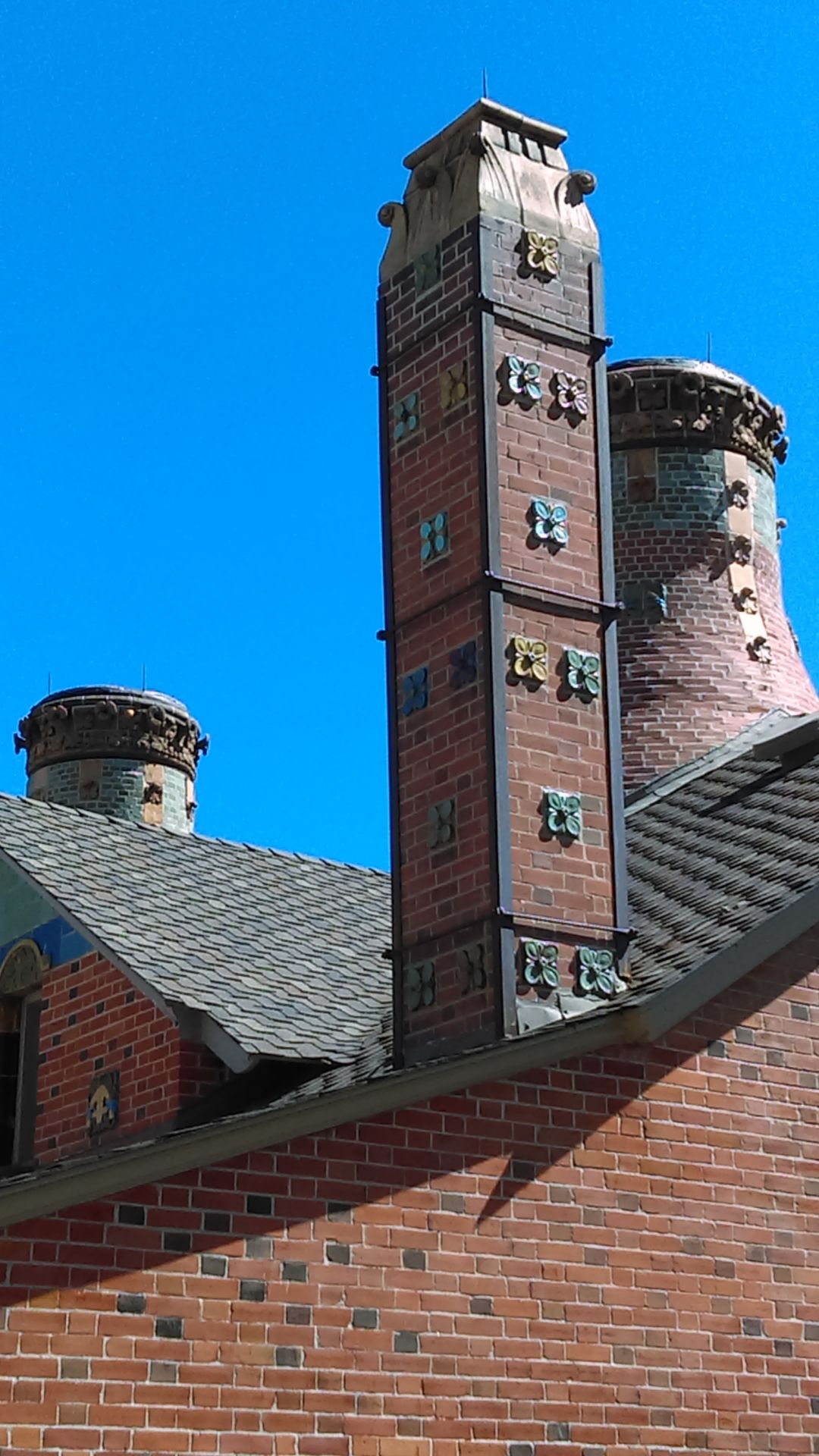 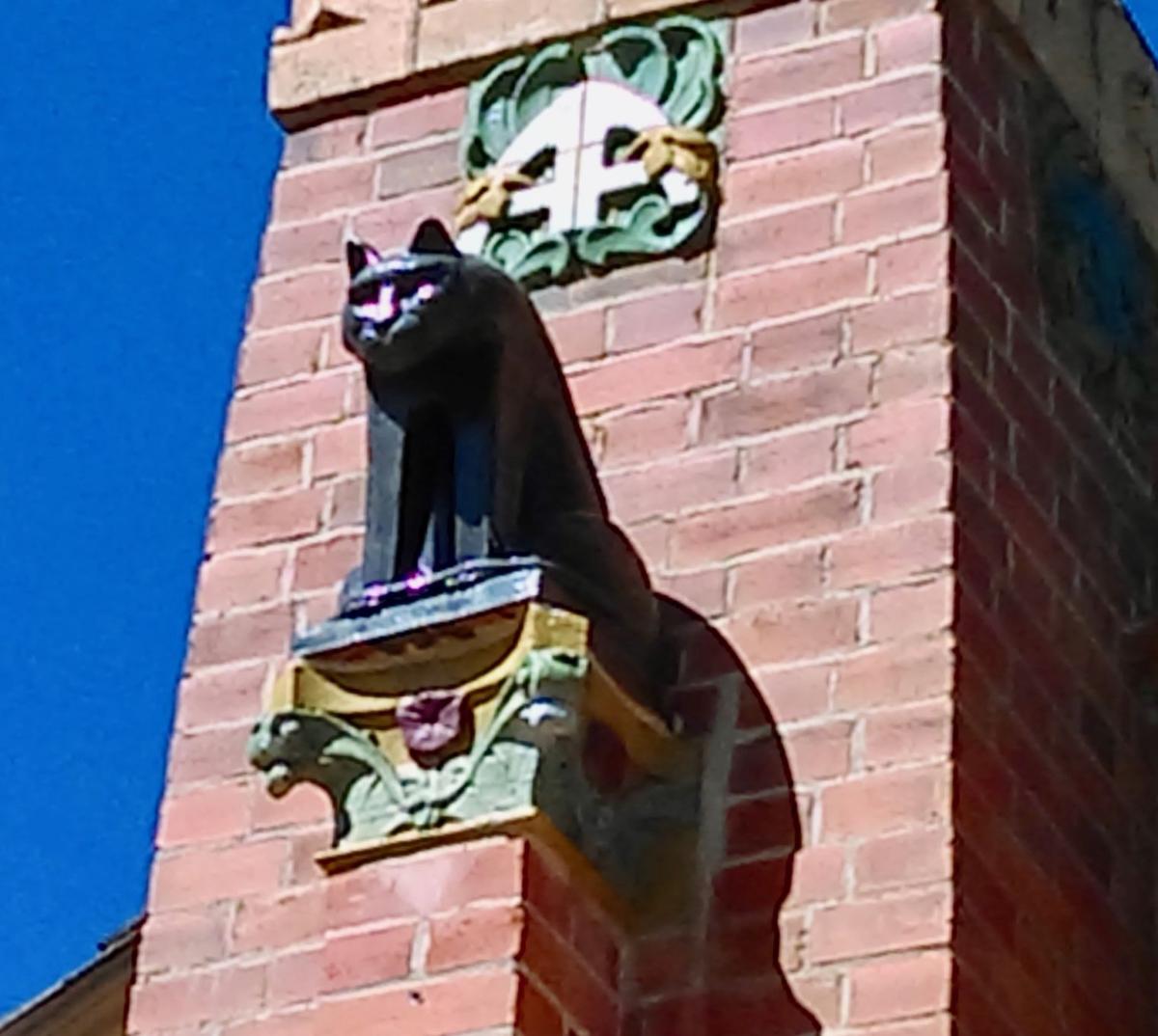 On the east side of the Van Briggle Pottery Co. building hovers a black cat designed by Anne Van Briggle, Artus Van Briggle’s wife, and one of her assistants.

A dragon finial perches atop the El Paso Club in downtown Colorado Springs.

On the east side of the Van Briggle Pottery Co. building hovers a black cat designed by Anne Van Briggle, Artus Van Briggle’s wife, and one of her assistants.

Slow down and look around as you travel the streets of our fair city.

For there are hidden architectural gems to be found in the Pikes Peak region. Have you really looked at the exterior of the Colorado Springs Pioneers Museum on Tejon Street as you hurry past?

The magnificent building, built in 1903 as the El Paso County courthouse, sports keystones of American Indian faces, angelic figures and leaves and ferns carved into the building.

This and other spots, mostly around downtown, are remnants of our past. And like some wise person said, you have to know the past to understand the present.

“Colorado Springs had to think about and use architecture you might not see in a typical Western town to create a sense of place,” says Colorado Springs Pioneers Museum Director Matt Mayberry.

“We did use architecture as a community-building device. It was part of who we were in terms of making this a livable and attractive place for us to move to. Architecture played a role along with the landscape in doing that.”

The century-old building now serves as facilities services administration for Colorado College. Built in 1908 as a memorial to the artist Artus Van Briggle, who died from tuberculosis in 1904, creators wanted to show off all the products they could produce at the Van Briggle plant on Nevada Avenue, including tiles, terra cotta and decorations. From its founding to 1968, the building served as a pottery factory and produced thousands of pieces of ceramic art and architectural works.

“It’s a Dutch type of architecture. It’s very beautiful and unique compared to potteries in the U.S.,” says George Eckhardt, who’s worked for CC as campus planner in facilities services for 37 years. “It’s the most unique one when it was in operation. The big kiln stacks on top are unique.”

A gargoyle also lurks here. His two fangs have fallen out, though, so he’s a much less imposing creature these days. Created by the Nevada pottery show, he went on the building around 1907-1908.

Sculptor Robert Garrison created the two monstrous creatures for the Norman Romanesque-style building. One is on the south face of the morning/pilgrim chapel and the other is on the east face of the tower. The sculptures are based on a timber wolf and a mountain lion because Garrison thought animals found in the region would be more appropriate.

The popularity of gargoyles grew during Gothic periods — the 1300s, 1400s and High Middle Ages, says Miller. And the word gargoyle is based on the sound they make. They sit on the eaves of the roof and are used as drainage pipes. A tube in the mouth carries rain water off the building and away from its foundation.

“You’re a stonemason, carving saints and tracery for windows,” says Jane Miller, an adjunct instructor in the architecture and interior design departments at Pikes Peak Community College. “Someone says we need to get water away from the foundation and need you to carve something. Stonemasons could go nuts a little bit and be more creative. They would use demons or mythical animals, like an elephant. They had no idea what an elephant looked like, so they would make it up.”

Drive by the Queen Anne mansion built in 1883 for James Hutchison Kerr, the historian for the El Paso County Pioneers Association and a Colorado College professor, and check out the scaly mythological beast’s arrow-shaped tail lifted to the sky.

“It’s (dragon finial) one of these decorative features you often see over time, especially in this era at the turn of the last century, that were added to architecture to be distinctive,” Mayberry says.

The El Paso Club, the oldest private club west of the Mississippi River, moved into the house in the late 1890s.

Tom Hardin, the club’s general manager, refers interested parties to a portion from Marshall Sprague’s book about the men’s club, “A Century of Friendship”: “Two experts of finials, professor Roger Aiken of Colorado College and professor Robert Judson Clark of Princeton University agree that the design might signify the determination of the dragon to guard the male sanctum.”

There also could be another more pragmatic reason for the finial.

“Finial means the top pointy bit of something,” Miller says. “It could also be a lightning rod. A lot of old buildings have lighting rods.”

One of the city’s most distinctive buildings stands downtown. The restored structure is lush with interesting and somewhat hidden artistic flourishes, unless you know what you’re looking for. There are the Art Nouveau-inspired ferns and leaves carved into the facade of the exterior stone walls. Cherubs are big here. They hold a banner above the main entrance and cherub-like faces decorate the big iron lamp posts by the museum’s entrance. On the north and south sides of the building are water fountains with lion heads for spigots. Also of note are the 38 keystones on the outside of the building, each one showcasing a different American Indian face.

“This building had a couple of different inspirations,” Mayberry says. “It’s Italianate, meaning inspired by Italian architecture. There’s a lot of Italianate structures in Colorado Springs. It was a common style at the time this was built. It’s marked by big overhanging eaves on the roof and high arched windows. The building is Neoclassical, marked by columns and classical columns in the building.”

Even if you didn’t know its official name, you’ll recognize the classic symbol of a wand or staff with two serpents twined around it. In Greek and Roman mythology it was said to be carried by the messenger god Hermes or Mercury.

The 1904 building originally housed the city’s public health department, and the caduceus, now symbolic of the medical profession, was carved into the structure. Living in the Springs was widely sought after for those struggling with their health.

“At that time that was a big part of what the city was about,” Mayberry says. “It was a healthy destination for people. We prided ourselves on that.”

The 1901 Cheyenne Building, which now houses the downtown brewery, was named after Cheyenne Mountain and Chief Two Moons of the Cheyenne Indian Tribe, who now watches as you enter and exit. The structure originally served as an office building that served the Chicago, Rock Island and Pacific Railroad. The bottom floor was for business, while the second and third floors contained sleeping rooms for railroad employees. From 1909 to 1963, the building became a hotel. The restaurant opened in 1993.

Here you’ll see a bulging brick wall mounted onto the exterior stucco wall of the building. The city of Colorado Springs commissioned artist Ken Williams to create the abstract sculpture created from bricks fired into a mix of geometric shapes. It debuted in 1986. You can see it by going online to cspmstoryofus.com. Click on the letter “P” for public art and locate it on the map.

“When that building was built they designed it to have artistic relief,” Mayberry says. “It’s a modern piece. It’s not representative of a person or anything.”

John Redmon has always loved music and always done music on the side. Then when he lost his job at 40, it was time to chase his dream.