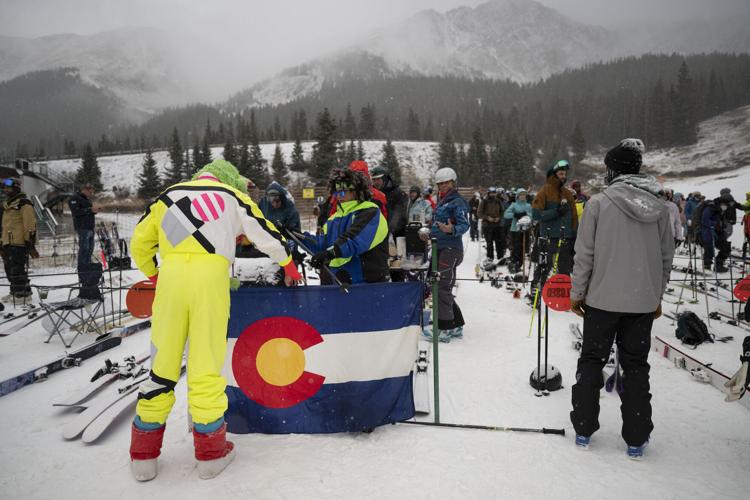 Darren Droge hangs a Colorado state flag on the barrier while he and others wait in line for the Black Mountain Express lift to open during opening day at Arapahoe Basin Ski Area on Sunday, Oct. 23, 2022, near Dillon, Colo. (Timothy Hurst/The Gazette) 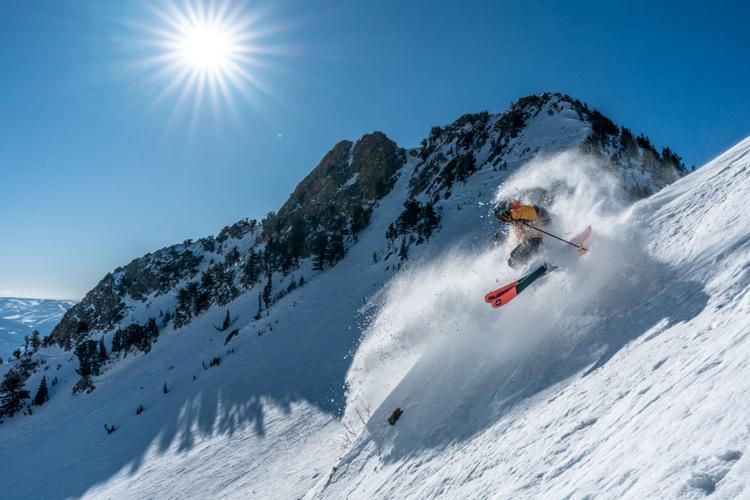 Darren Droge hangs a Colorado state flag on the barrier while he and others wait in line for the Black Mountain Express lift to open during opening day at Arapahoe Basin Ski Area on Sunday, Oct. 23, 2022, near Dillon, Colo. (Timothy Hurst/The Gazette)

It’s been a glorious week of snowfall in the land of champagne powder.

The first storm last Monday dropped 5-10 inches on the northern and central mountains, and 10-20+ in the southern mountains. The second storm Wednesday sprinkled double digits on top of that, and a third storm on Friday was icing on the snowcake, leaving some ski areas with 4 feet of fresh powder for the week. Wolf Creek measured 5!

After a week like this, it should be crystal-clear to all: There’s no better place than Colorado to ski in all the world.

And yet, there are those among us who speak the sacrilege that Utah skiing is somehow better than our Colorado bounty. Some of these apostates work in my office, and one even lives in my home.

So I set out this week to find some expert meteorologists and settle the question once and for all: Who has the better skiing, Colorado or Utah?

I went straight into the belly of the beast, first, and called the Doctor of Snow himself, atmospheric science professor Jim Steenburgh, who wrote the book “Secrets of the Greatest Snow on Earth.” Problem is, he wrote it about Utah.

“There’s really two reasons why the snow is better in Utah: 1. Quantity of snow 2. Frequency of deep powder days,” Steenburgh told me.

“Better here means better for deep-powder skiing, which for many is the pinnacle of skiing,” Steenburgh clarifies. “Utah’s powder reputation is based largely on the remarkable microclimate in the Cottonwood Canyons where you’ll find Alta, Snowbird, Solitude and Brighton ski resorts.”

One of Steenburgh’s criteria for rating Utah better than Colorado is sheer volume of snow.

Sounds to me like it's always snowing in Utah, which pretty much eliminates one of the great pleasures of the sport, spring skiing — those bluebird days gliding through overnight powder with the blazing sun on your face.

I also reminded Steenburgh that Colorado has twice as many ski areas as Utah. Doesn't that sheer volume of skiing experiences give Colorado skiers more of a chance at finding great snow on any given ski day? And doesn't the higher altitude of many ski areas in Colorado help the powder factor?”

“Not really,” he replied bluntly. “Regardless of elevation, it snows less in Colorado. Colorado resorts are clustered, too, so one could travel, for example, to Aspen from Summit County, but those are long distances to cover (and both Colorado and Utah have problems with ski traffic)."

On his OpenSnow blog, Boulder meteorologist Joel Gratz makes the counterargument that if one region in Colorado doesn’t have great snow on a weekend, you can just shift regions.

“I love Colorado because different regions of our state are favored by each storm track,” Gratz writes. “For example, if a storm tracks to the south and misses the northern mountains, I can drive a few hours and ski in the deeper snow in the southern mountains. Or vice-versa."  In sum, he told me, "Snowfall amounts favor part of Utah. A variety of terrain and ski towns favor Colorado."

Snow is a kind of subjective alchemy, of course, the perfect mixture of cold, water and air is probably different for every skier. But Gratz argues that the higher elevations of Colorado’s ski areas are, in fact, a huge advantage over Utah.

“Most of Colorado’s best ski terrain sits between 8,000 to 12,000 feet above sea level,” he writes. ”This is a higher elevation than other areas around the western United States, western Canada, and most of Europe. High elevation means colder temperatures. With colder temperatures, mountains can make snow early in the season to ensure terrain is open, and snow can stick around longer into the spring.”

And Colorado’s higher elevations mean Colorado ski areas have longer runs. “Many of the larger resorts stretch nearly 3,000 vertical feet from summit to base,” Gratz observes.

He also points out that high elevation leads to fluffier snow. “In general, colder temperatures help the atmosphere to create fluffier, lighter snowfall."

But he thinks overall snow quality between the two states is probably a draw. "The snow in Utah and Colorado is about equal. Sometimes it's super fluffy, sometimes it's dense, and most of the time it is in between and of excellent quality."

Let me pause to add here that the Salt Lake City Tribune recently did a point-by-point comparison of Colorado and Utah skiing, reviewing Size, Access, Length of Season, Altitude, Off-Slope Experience, Snow Totals, Snow Quality and the X Factor. The Tribune concluded that Colorado was the winner, with this caveat: (Because even if Utah’s better, we’re not telling.)

But no matter how you side in this smackdown, even Dr. Snowadmits that the future (thanks to climate change) probably belongs to Colorado.

“There will still be some great ski seasons in the future, but we will see global warming loading the dice for warmer winters and causing a greater fraction of winter precipitation falling as rain," Steenburgh told me.

Colorado’s higher altitude, in other words, means skiing will remain viable here even if the warming starts to shut down skiing in other places, like what is happening in Europe this season. Some day in the distant future, if the direst predictions bear out, the only skiing you’ll find in America might be in Colorado.

Put that in your pipe and smoke it, Utah.