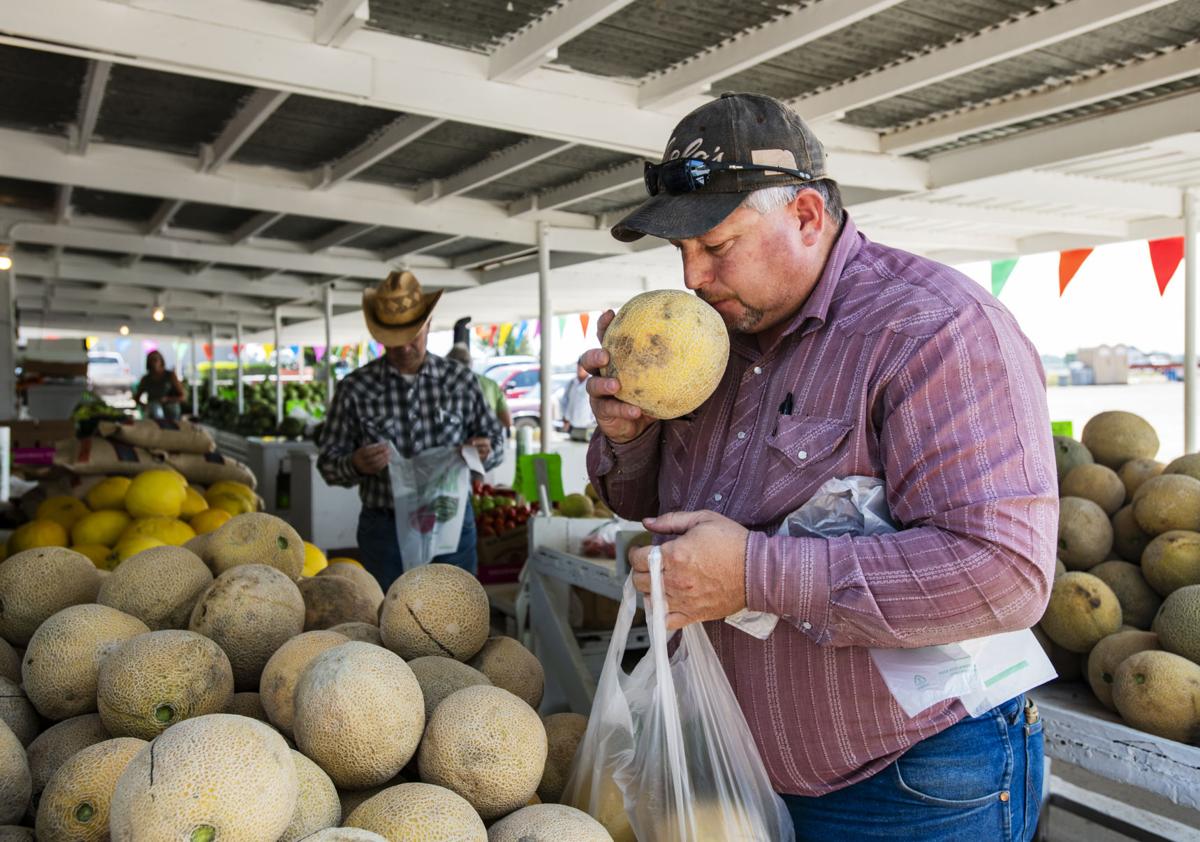 Jason Golding sniffs his canteloupe to gauge the ripeness of the fruit this month at the Knapp’s Farm Market in Rocky Ford . 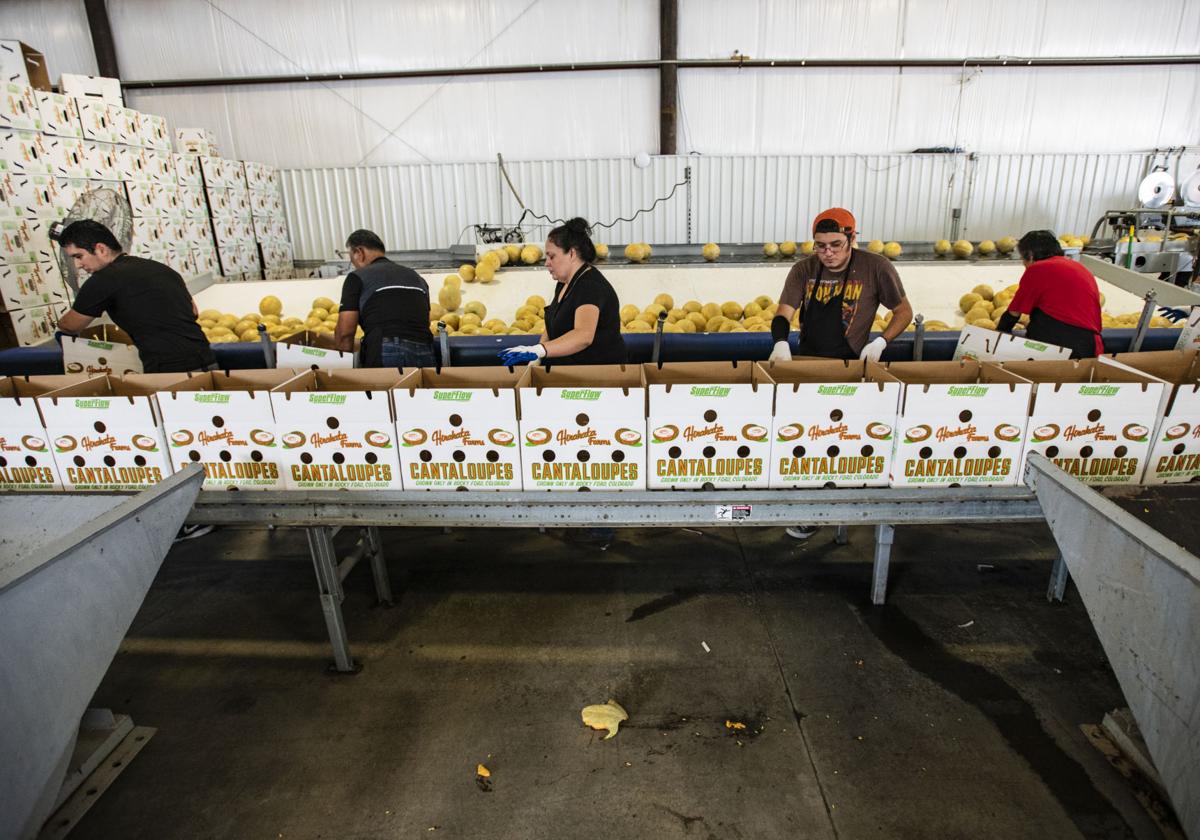 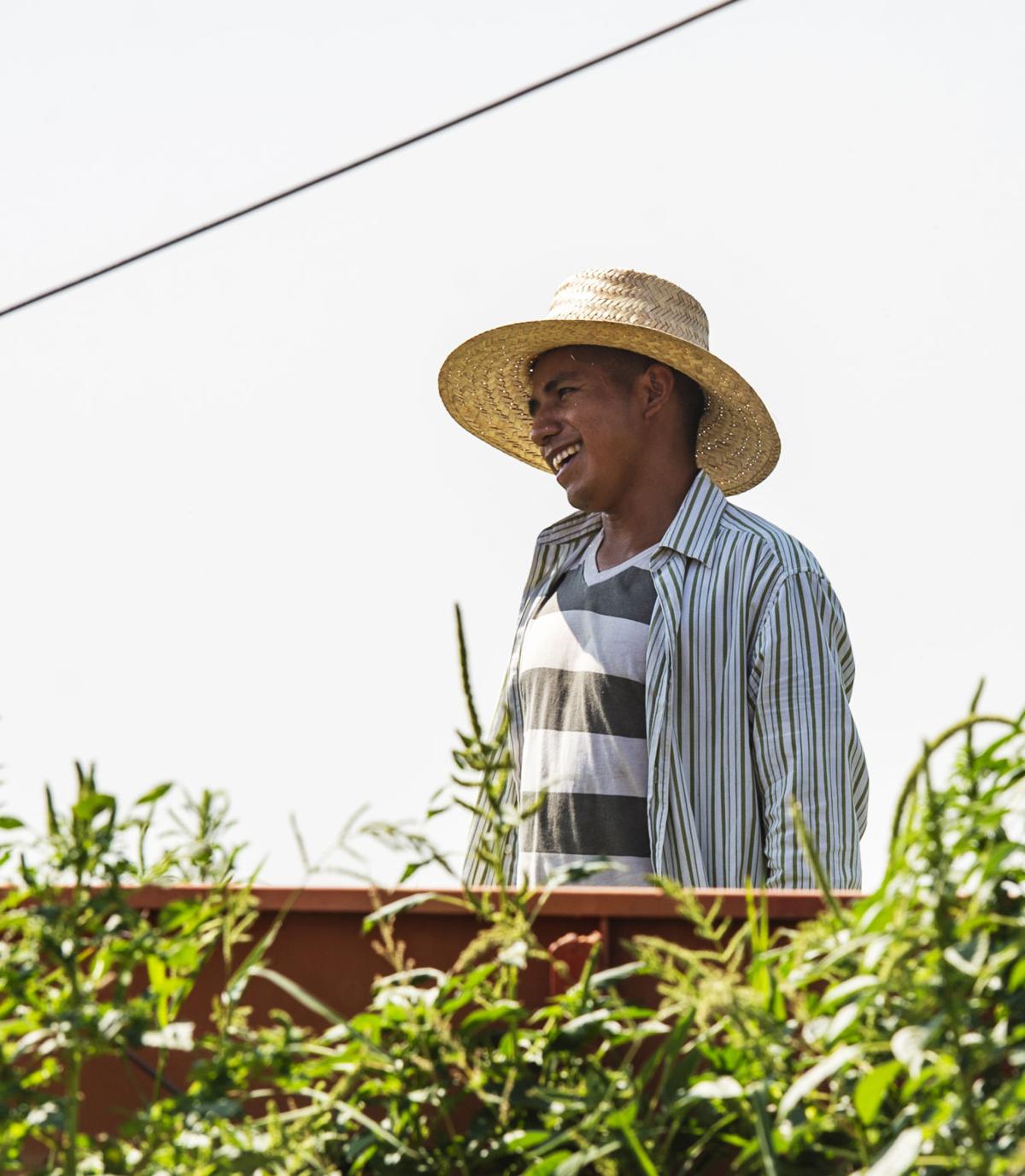 German Martinez smiles at his fellow field workers after finishing a harvest at Hirakata Farms in Rocky Ford this month. 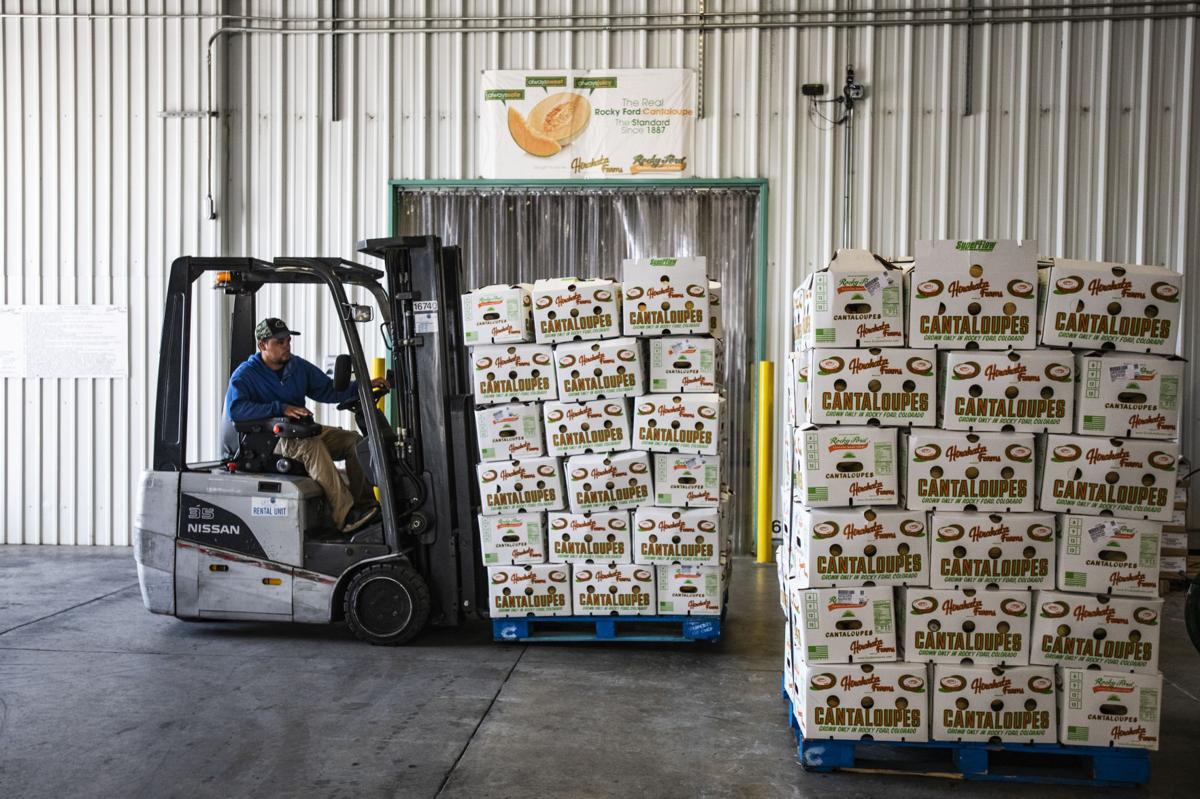 Cesar Nunez moves palettes of canteloupes to be shipped off to stores in the Hirakata Farms packing sheds in Rocky Ford this month.

Jason Golding sniffs his canteloupe to gauge the ripeness of the fruit this month at the Knapp’s Farm Market in Rocky Ford .

German Martinez smiles at his fellow field workers after finishing a harvest at Hirakata Farms in Rocky Ford this month.

Cesar Nunez moves palettes of canteloupes to be shipped off to stores in the Hirakata Farms packing sheds in Rocky Ford this month.

ROCKY FORD • It’s already a scorcher on a mid-August morning in the Arkansas Valley, but world-famous Rocky Ford cantaloupes wait for no man. They must be plucked from their green, curled vines daily.

“The crop doesn’t wait,” said Michael Hirakata, co-owner of Hirakata Farms, the largest packer and shipper of cantaloupes in the region, and the president of Rocky Ford Growers Association. Hirakata was born in La Junta and grew up on the farm started by his father and uncle in Rocky Ford. When his dad retired 15 years ago, he and a cousin took over, though he’s been growing cantaloupe for 28 years. “We’d like to rest, but that’s why we have wintertime.”

All year, lovers of the famed fruit anticipate late summer, when their favorite melon finally ripens and makes the journey from Rocky Ford fields to grocery stores and farmers markets.

“They’re the sweetest in the world,” said Gail Knapp, co-owner of Knapp’s Farm and Knapp’s Farm Market in Rocky Ford. “Everybody will tell you it’s the hot days and cool nights and the soil. The growing conditions are perfect for growing sweet cantaloupe and melons.”

About 60 folks — vulnerable skin covered in long shirts and sweatshirts, pants and wide-brimmed hats — slowly work under the relentless sun, moving through the lush fields a couple of miles from Hirakata Farms, on the hunt for melons that have turned the color of straw, a sure sign of ripeness. They pull them cleanly from the vine, place them in a giant bin on the back of a truck, and trundle them back to the packing plant, where 30 to 35 more workers wait to pass judgment on the fruit, determining which are worthy of the Hirakata/Rocky Ford Growers Association sticker.

Cantaloupe sprout from tiny blue seeds, planted about mid-April, depending on weather. Sub-inch farming uses data on soil, seeds and weather to map the most efficient layout of each field and program it into GPS on a planter that goes on autopilot. Irrigation also is applied with GPS under the seed bed, so the plant doesn’t have to search for water. It’s right there. The system helps with weed control, fruit quality and safety, and it reduces or eliminates use of diesel, compaction and fruit overlap. It also cuts work time, improving efficiency.

Water from the Arkansas River isn’t used much when the fruit is in its early stages. But the middle and later growing stages require a few hours of water every day for two to three weeks. When the fruit is ready for harvesting, all watering ceases.

“This year, it rained for a good week,” said Hirakata. “While you were getting hail in the Springs, it just rained here. We use only the water that we need. We try not to use extra.”

Back at the plant

Mostly men surround the long conveyor belt inside the cavernous packing plant. As the melons roll merrily along, each is inspected by at least half a dozen people, occasionally including Hirakata, who, on this Monday, pulls a good one out of the discard bin and hands it back to a worker.

Each cantaloupe is categorized as a No. 1 or No. 2, with size and appearance the deciding factors. Those that arrive nicked, overripe or green are deemed No. 2s. While No. 2s wind up in big bins headed to farmers markets and roadside stands, No. 1s are bound for grocery stores. But that doesn’t mean you should shy away from a melon at a farm stand. Hirakata would shop in both places; he likes the overripe ones. But there are bad apples in the bunch, the cantaloupes that simply get dumped or face a future as dinner for cattle or other livestock.

The rough and scaly cantaloupe are shimmied along the packing line, washed, sanitized, stickered, packed in cardboard boxes and cooled from their field temperature of 75 to 80 degrees down to 40 degrees through a forced-air cooling system. It extends their shelf life, said Hirakata, as he watches over his buzzing hive of activity. With the cantaloupe snuggled tightly in their boxes, retailers either send trucks to pick up their prize, or the farm delivers.

Each day, Hirakata tests the melons for sugar. Their brix (sugar content) is usually at 13 to 14, he said, but this year they’re around 15 to 16, which means they’re pretty sweet.

“I’ve eaten so many over my life, I can usually judge it,” he said. He admits to occasionally tiring of the sweet treat, which he eats plain or with a sprinkle of salt or the Mexican spice tajin, “but when it’s gone, I really miss it.”

All of his melons should be ripe when they land in the grocery stores. But if consumers want crispy flesh, they should choose a melon that’s more firm and green. If they want softer meat, they should seek out a melon that’s softer on the outside and smells sweet. That smell gets more pungent as the melon ripens.

With seven fields of cantaloupe, Hirakata now is harvesting only his second field. A good day ends with 60,000 packed cantaloupe. The day before, they packed 80,000 melons — a “great day,” said Hirakata. A full season will send 2 million cantaloupes to grocery stores. He’s not sure how many make it to the farm stands.

The farm also produces honeydew and regular and personal-sized watermelons, though not nearly as many as their brethren, the cantaloupe. Watermelons are packed in the field, taken to the dock and shipped out. They’re not as dirty as the cantaloupe, which get messy when the morning dew sets on them.

“It’s hard,” said Hirakata. “It’s very rewarding to see the plants grow and harvest them. It keeps you busy.”

Hirakata’s cantaloupe season kicked off July 16, a good week to 10 days earlier than usual, thanks to the dry, hot weather, a coup for melon growers.

West on U.S. 50, a bit outside of downtown Rocky Ford, Knapp’s Farm Market opened June 29, the earliest ever, reported Knapp.

“This year, the quality is excellent,” she said. Her farm produces cantaloupe, other melons and a wide variety of vegetables. “People should eat to their heart’s content.”

The “L” word is a bad word around these parts. In 2011, Jensen Farms, a cantaloupe farm in Holly, was cited as the source of a national listeria outbreak that killed 33 people. It was one of the country’s most deadly outbreaks of a food-borne illness, according to a government investigation.

Holly is more than 90 miles from Rocky Ford, but the melons still were marketed as Rocky Ford, which sent a time bomb into the farming community. Though the outbreak happened toward the season’s end, Knapp said she was concerned about the following year. She, Hirakata and other area farmers committed to taking big steps in food safety, going through a food safety process and submitting to yearly audits. Hirakata even built a new packing shed and installed new cleaning and cooling technology and equipment.

Knapp and other farmers answered a lot of questions that next year, she said, and they educated people about needing to wash their food and other safety issues. She isn’t sure if the outbreak affected sales, but business since has returned to normal.

Coloradans — and others — can't get enough of state's iconic peaches, melons, corn and chiles