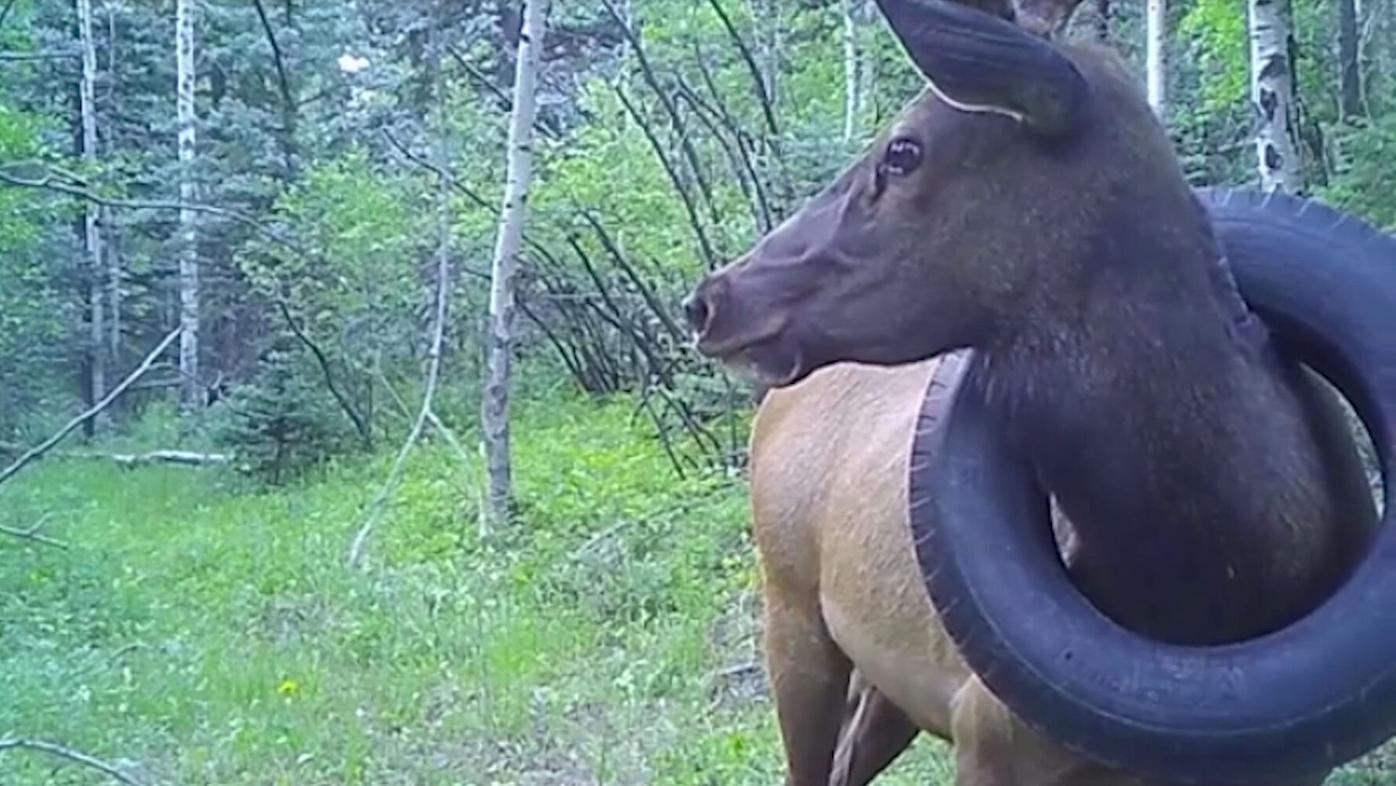 A trail camera near Conifer shows a bull elk with a tire stuck around its neck on July 12, 2020. 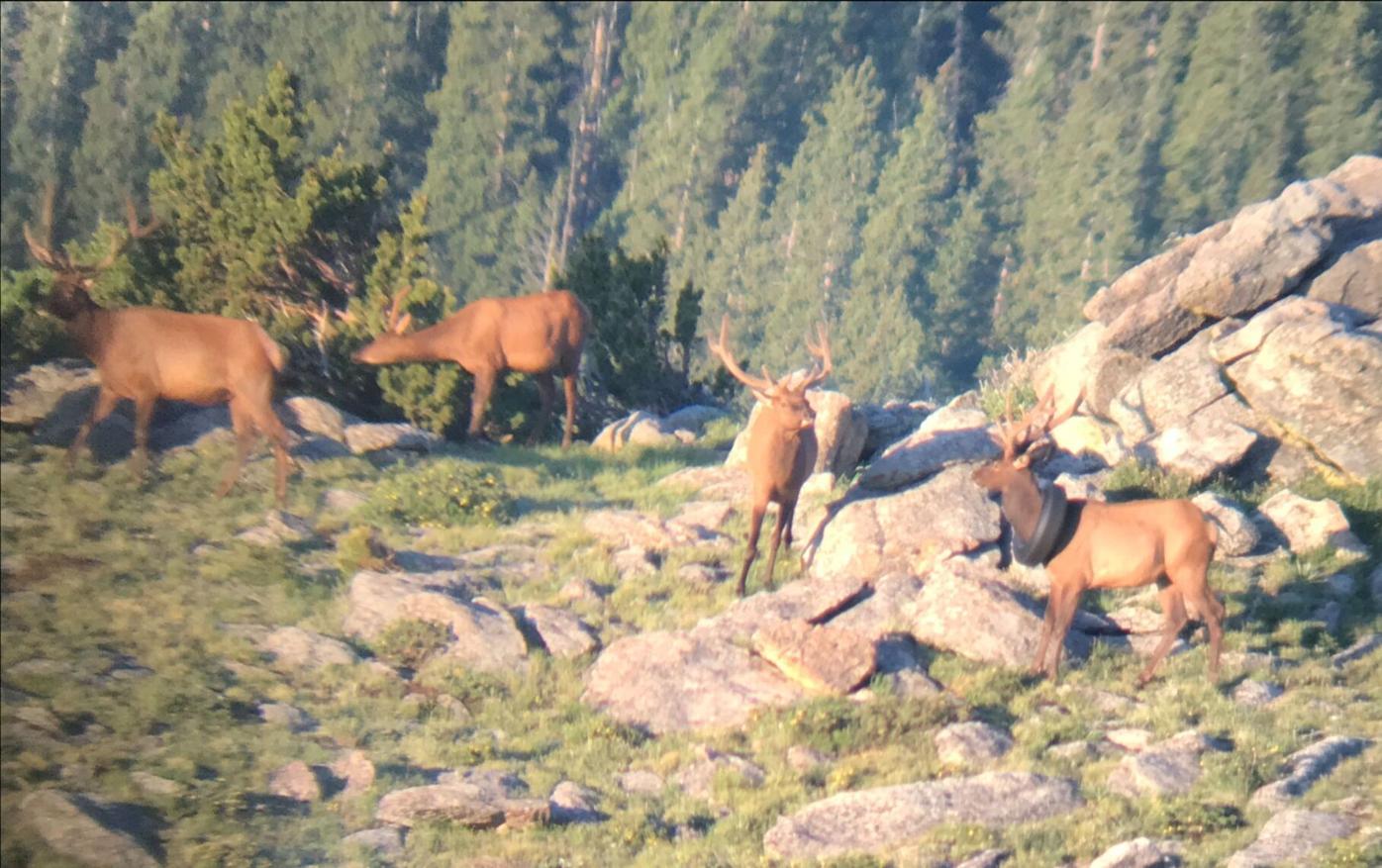 A bull elk, far right, is seen with a tire stuck around its neck in its first reported sighting in July 2019 in the Mount Evans Wilderness. 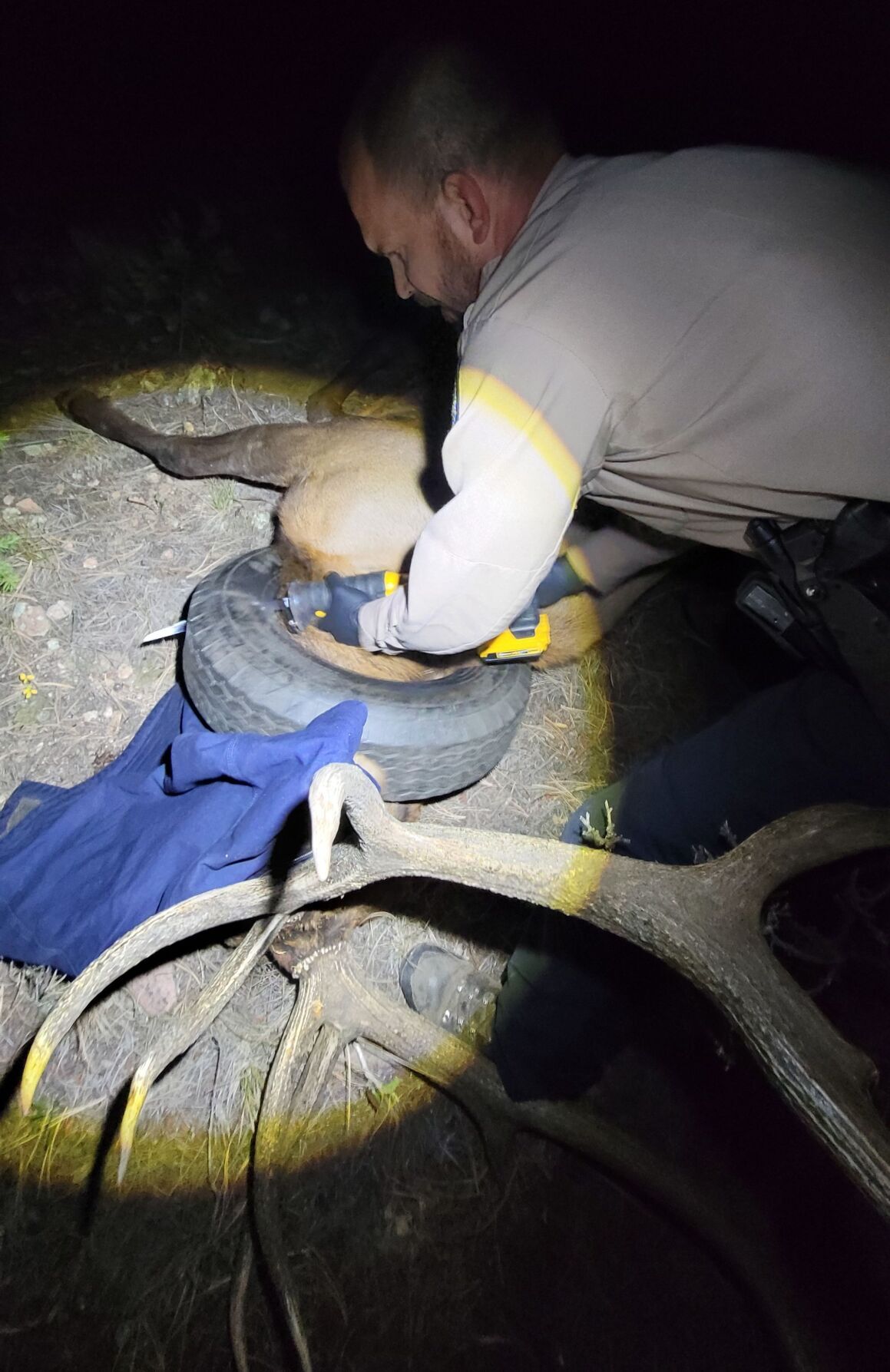 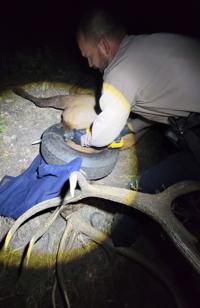 Wildlife officer Dawson Swanson attempts to cut a tire off of the neck of a bull elk on Oct. 9, 2021, in central Colorado.

A trail camera near Conifer shows a bull elk with a tire stuck around its neck on July 12, 2020.

Wildlife officer Dawson Swanson attempts to cut a tire off of the neck of a bull elk on Oct. 9, 2021, in central Colorado.

A bull elk that had a tire stuck around its neck for more than two years was finally set free Saturday, according to Colorado Parks and Wildlife.

Wildlife officers said they found the long sought-after elk Saturday evening after a resident in Jefferson County reported the sighting to parks and wildlife. The 4 1/2-year-old elk was located south of Pine Junction in central Colorado with a herd of 40.

Officers said they tranquilized the 600-pound elk and cut off its antlers to allow them to remove the tire because they could not cut through the tire’s steel bead.

“It was tight removing it,” wildlife officer Scott Murdoch said in a news release. “We would have preferred to cut the tire and leave the antlers for his rutting activity, but the situation was dynamic and we had to just get the tire off in any way possible.”

The saga of the bull elk with a tire around its neck is over. Thanks to the residents just south of Pine Junction on CR 126 for reporting its location, wildlife officers were able to free it of that tire Saturday.Story: https://t.co/WHfkfPuAck📸's courtesy of Pat Hemstreet pic.twitter.com/OcnceuZrpk

The elk was first spotted with the tire around its neck in July 2019, when a wildlife officer was conducting population surveys in the Mount Evans Wilderness.

At the time, officers believed the elk was too far in the wilderness to be able to capture, Murdoch said. From there on, the elk was spotted on trail cameras near Conifer in June, July and August 2020.

Colorado's iconic elk rut: 'You feel like you're in a crazy nature documentary'

After disappearing over the winter, the elk was spotted again near Conifer in May and June. Parks and wildlife made four attempts to locate the elk after those reports without success.

“This elk was difficult to find and harder to get close to,” Murdoch said. “In the winter we weren’t getting any reports of him. In the springtime, we would get an occasional report or see him in a little bachelor herd."

Here is some video of this bull elk over the past two years. pic.twitter.com/R6t9nNPOyb

When officers finally tranquilized the elk on Saturday, it was their fourth attempt in the past week, Murdoch said. The three previous attempts were thwarted when other elk in the herd blocked the officers’ shot for the tranquilizer.

After the tire and antlers were removed, the elk was back on his feet within minutes, wildlife officer Dawson Swanson said in a release. About 35 pounds were removed from the elk, with the antlers, tire and 10 pounds of debris caught inside the tire.

Despite the years carrying the fire, the elk’s neck was also in good condition after the removal. Swanson said the elk’s neck only had some rubbed-off hair and one small open wound the size of a coin.

“I am just grateful to be able to work in a community that values our state’s wildlife resource,” Swanson said. “I was able to quickly respond to a report from a local resident regarding a recent sighting of this bull elk in their neighborhood."

Parks and wildlife urges residents to prevent these incidents by keeping property free of obstacles that wildlife can get tangled in or injured by, including tires, swing sets, hammocks, holiday lights and sports equipment.

Anyone who sees wildlife caught in something is asked to report it to parks and wildlife’s Denver office at 303-291-7227.