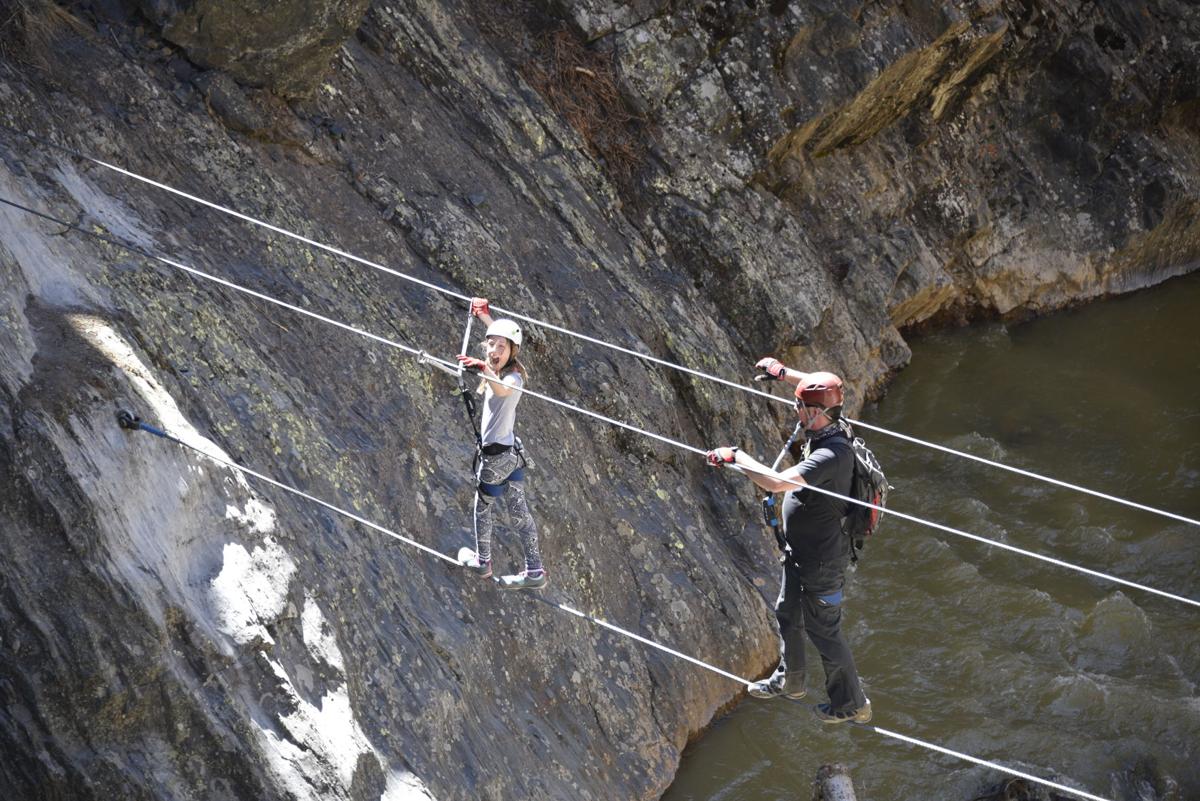 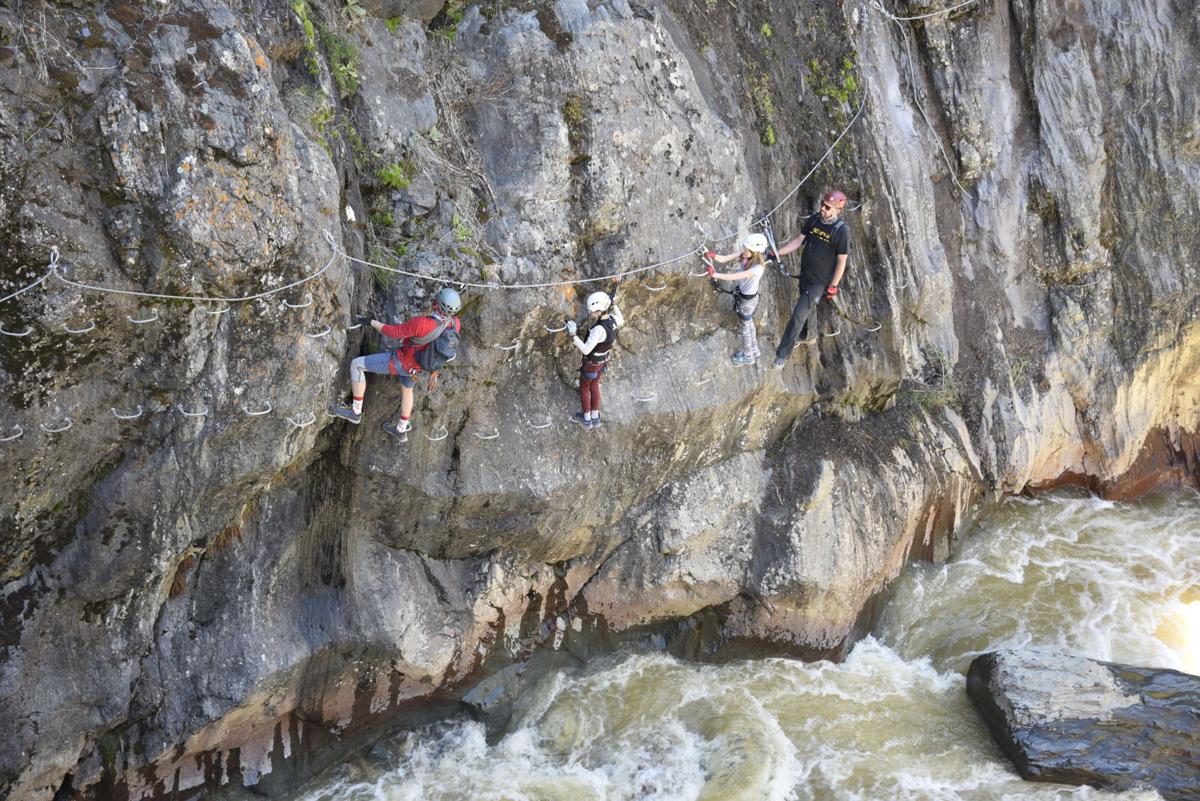 Folks try out Ouray’s new via ferrata above the Uncompahgre River. 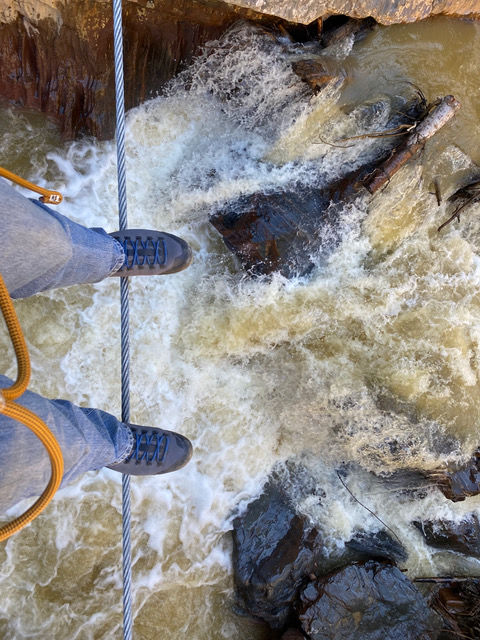 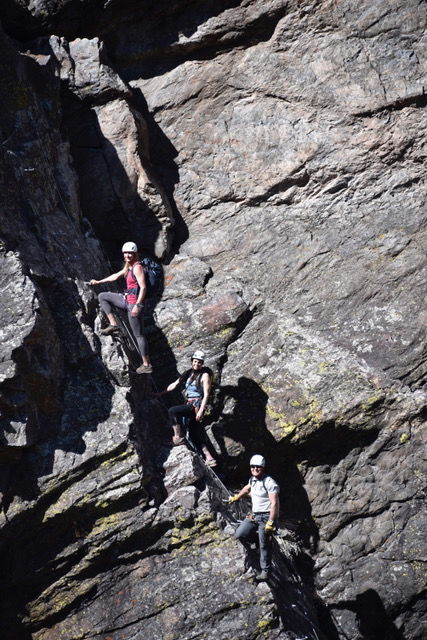 Scaling the canyon walls of Ouray along the new via ferrata in town. Photo courtesy Mark Iuppenlatz

Folks try out Ouray’s new via ferrata above the Uncompahgre River.

Scaling the canyon walls of Ouray along the new via ferrata in town. Photo courtesy Mark Iuppenlatz

The via ferrata craze of Colorado has come to the "Switzerland of America" — fitting, considering the European-inspired fun.

"It's a perfect fit for Ouray," said local co-creator Mark Iuppenlatz, "because one thing we have in Ouray is no shortage of cliffs."

The climbing route of cables and iron rungs is set to open at 8 a.m. Saturday along the high, exposed walls of the Uncompahgre Gorge. The concept has been four years in the making in the iconic town, boxed in by the canyon.

Ouray has been positioning itself as "the outdoor recreation capital of Colorado." Iuppenlatz and his fellow owner of San Juan Mountain Guides thought to add a via ferrata to the portfolio — the "iron pathways" that began as practical for World War I soldiers navigating the Dolomites and have since become tourist attractions and rock climbing introductions for clipped-in thrill-seekers.

First in Ouray, there was some convincing to do.

"It wasn't so much (city leaders) were against it," Iuppenlatz said. "It was that they didn't know what it was."

But there was the example from regional neighbor Telluride. The via ferrata there is credited with setting the standard for others in the state; in recent years, they've been established at ski areas and such commercial parks as Cave of the Winds and Royal Gorge.

As opposed to those places, the idea for Ouray's via ferrata was to make it free for anyone with the gear and know-how. Sure, San Juan Mountain Guides would benefit by selling its equipment and services to unaccustomed visitors. But the basis of the pitch to leaders was the potential economic gain for the entire city.

Iuppenlatz and Co. got the green light after more than a year of convincing. Then they got to fundraising $250,000 and enlisting alpinists and engineers to build.

The result is what Iuppenlatz promises to be Colorado's most epic via ferrata yet.

The routes often are scoffed at by climbing purists. Iuppenlatz's guides, "people who have climbed Everest and Denali," took practice runs ahead of Memorial Day weekend "and it didn't bore any of them," he said.

Unlike Telluride's horizontal-trending via ferrata, this one boasts "significant verticality," Iuppenlatz said, with climbers in some places ascending hundreds of feet above the roaring Uncompahgre River.

One section is aptly called "the Stairway to Heaven." There are a pair of cable bridges that harnessed people cross from one rugged wall to the next — "sort of like walking a tight rope," Iuppenlatz said, "but with cable hand rails."

The route of 850 iron rungs could take anywhere between two hours and four hours to finish, Iuppenlatz said. He recognized some would wait to travel to it due to the pandemic.

"But, in a way, this has become even more important for the town," he said. "Our businesses are all struggling. Having something new and interesting to bring people eventually could be a real blessing for everybody."

Many attractions can be found at the Cave of the Winds Mountain Park in Colorado Springs, including a high ropes course, a massive canyon swin…