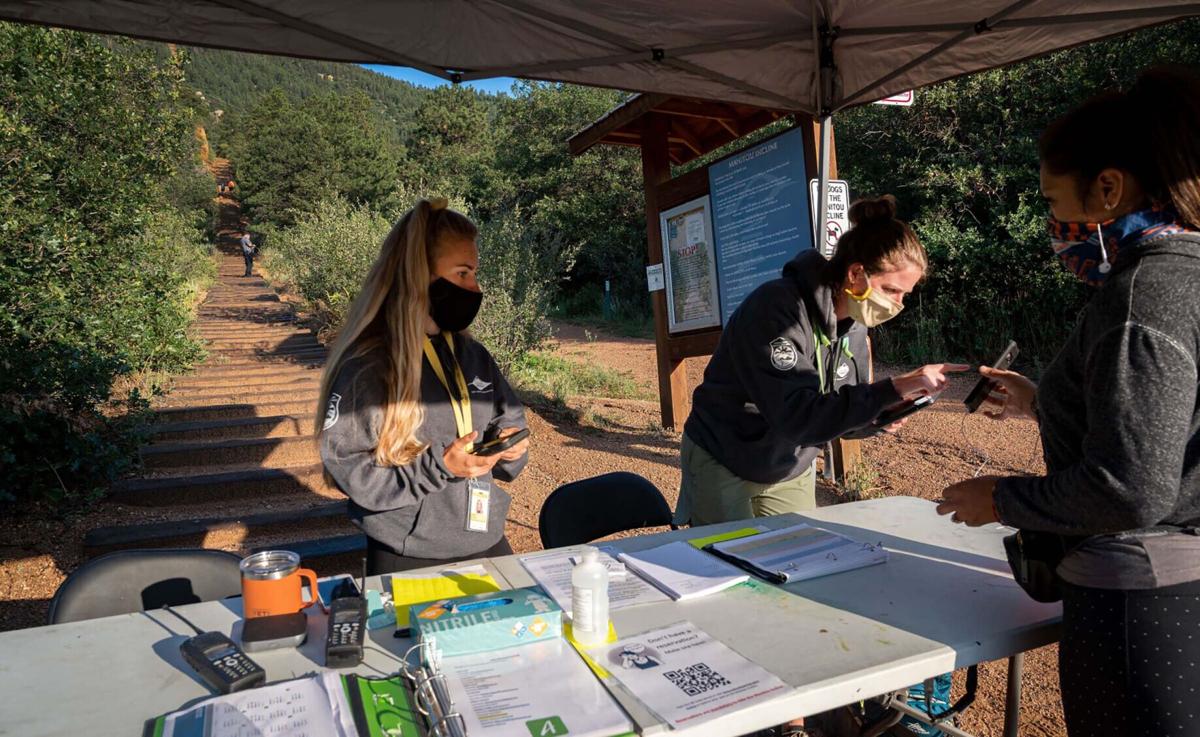 Davis Jess, right, and Kraft Rylee from Colorado Springs Park and Recreation check in a hiker at the base of the Manitou Springs Incline. Reaction to the new system for managing Incline traffic has been mixed. From the feedback Manitou Mayor John Graham has received, “most people seem to be pretty happy.” 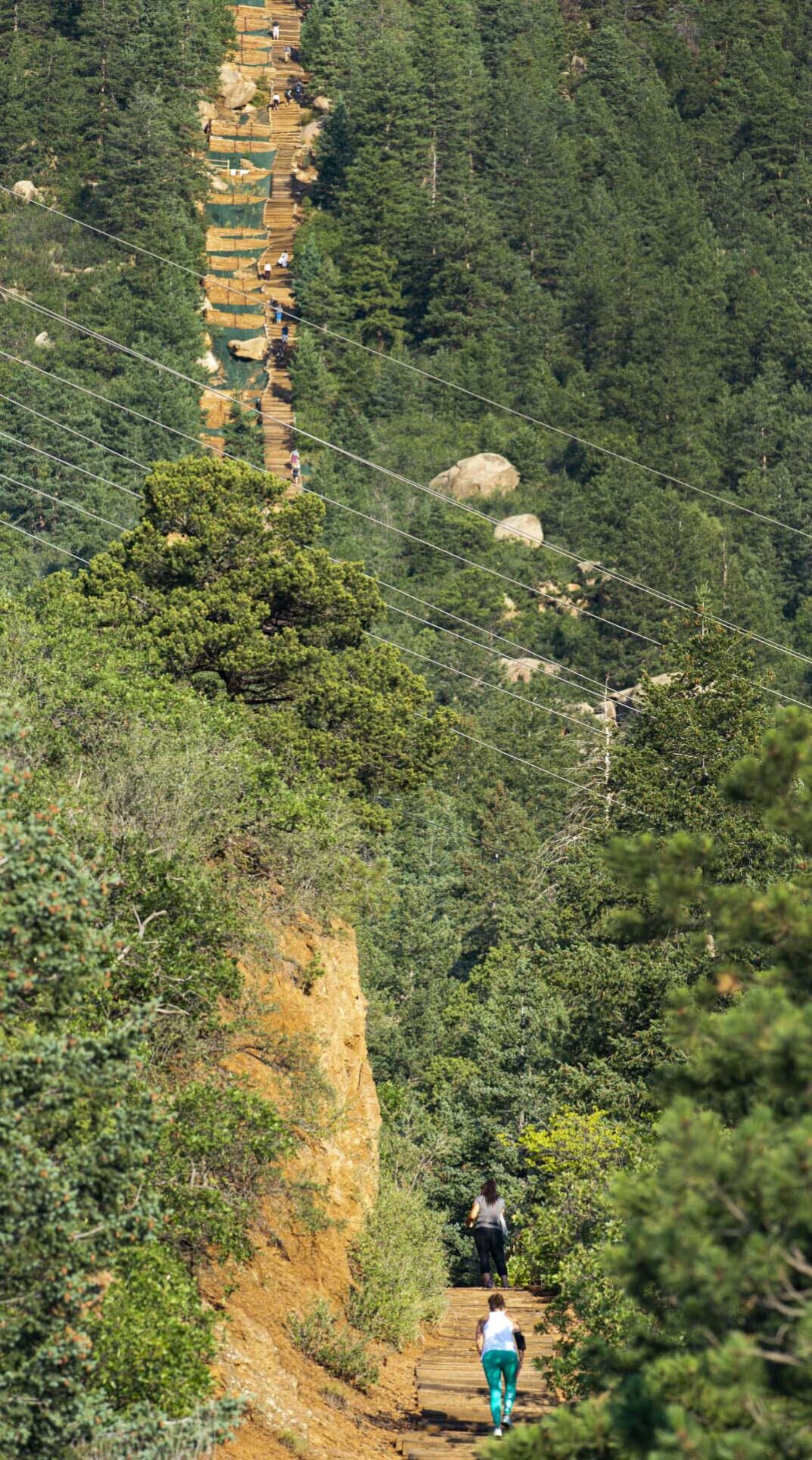 Hikers make their way up the Manitou Springs Incline on the morning of Thursday, Aug. 6, on the first day of its reopening since March due to the COVID-19 pandemic. Hikers must register online for a start time. Using federal, pandemic-related relief money, the Colorado Springs parks department is paying staffers to station themselves at the Incline base and check hikers in.

Davis Jess, right, and Kraft Rylee from Colorado Springs Park and Recreation check in a hiker at the base of the Manitou Springs Incline. Reaction to the new system for managing Incline traffic has been mixed. From the feedback Manitou Mayor John Graham has received, “most people seem to be pretty happy.”

Hikers make their way up the Manitou Springs Incline on the morning of Thursday, Aug. 6, on the first day of its reopening since March due to the COVID-19 pandemic. Hikers must register online for a start time. Using federal, pandemic-related relief money, the Colorado Springs parks department is paying staffers to station themselves at the Incline base and check hikers in.

Editor's note: This article has been revised to correct a reference to the Incline's "no-show" rate based on numbers provided to the Colorado Springs parks board.

Roger Austin remembers a time when the Manitou Incline was just a jumbled set of abandoned railroad ties on company land. When it was a cult workout for a small group of trespassing fitness fanatics like him. A “peaceful” time, Austin said.

This was mostly in the 1990s through the 2000s, before the cities of Colorado Springs and Manitou Springs and other agencies came to the table to negotiate a legal, publicized future for the old railway-turned-trail. An official intergovernmental agreement was settled in 2011.

“I would’ve never in my wildest dreams guessed there’d be that many people wanting to do it,” Austin said, echoing former regulars.

The years gave way to the Incline becoming one of the region’s most popular attractions, with upwards of 1,000 people ascending on the busiest days, as suggested by in-ground counters managed by the city of Colorado Springs. That intergovernmental agreement made the city, now owning the lower portion of the Incline, the “single entity to assume management responsibility.”

But just as the years gave way to crowding, so they did to bitter bickering between the neighboring municipalities.

Leaders living at the base of the Incline have long accused Colorado Springs counterparts as negligent of parking- and traffic-related headaches caused by the staircase of worldwide acclaim. The dispute came to a head in March, when Manitou City Council closed the Incline under an emergency declaration — or, as Colorado Springs officials said in a statement, “under the guise of COVID-19.”

Austin has been sympathetic to the Incline’s critics. On his way to the trailhead through the residential Ruxton Canyon, he’s seen the parade of people in the summer.

“I know Manitou needs to do something,” he said, “but wow.”

That’s his reaction one month into the new Incline regime.

It includes a free, online reservation system managed by Colorado Springs’ parks department. Using federal, pandemic-related relief money, the department is also paying staffers to station themselves at the Incline base and check hikers in, limiting them to 45 per half-hour. That’s part of the memorandum of understanding between the two cities.

But his can’t be called the prevailing local opinion. A month in, “mixed” seems to be the more accurate description.

Steve Stermer, for years hiking the Incline every day, continues to do so. He starts his climb at 6 a.m. still, finishing at the top by pulling out his phone and making the 6 a.m. reservation for the same day next week; slots become available to book seven days in advance. He’s not alone in this routine.

As Jill Suarez, another longtime regular, said: “Nobody has missed the crowds.”

From the feedback Manitou Mayor John Graham has received, “most people seem to be pretty happy,” he said. “They’ve got more of the outdoor solitude to themselves, not as compressed and crunched. So it seems to be a popular move.”

Though it appears some have heeded the call Suarez made to fellow enthusiasts during the Incline’s five-month closure: to enjoy the many other trails the region has to offer.

And indeed: “That’s part of why I think you don’t see a bigger outcry,” Bruce Barron said. “It’s the number of people who’ve just accepted it and gone elsewhere.”

During the closure, Barron, then on the board of the advocate nonprofit Incline Friends, described in the Colorado Springs Business Journal the Incline as “an inter-municipal battle worse than anything I experienced in 30 years of civic leadership in Pittsburgh, my previous home.” His experience in policy dates back to 1990, when he was a volunteer press secretary for Rick Santorum’s congressional campaign.

Barron felt qualified to compile a 25-page report on the Incline’s state of affairs, as he did in August.

He said he spent some 20 hours at the Incline’s base throughout the month, noting observations there and on the Incline’s highly active Facebook page. He said he’s collected publicly available data to derive such findings as this, which he sees as troubling: as high as a 70% reduction of Incline use during peak early-morning hours.

There is “stiff competition for early-morning slots,” reads Barron’s report. This, he writes, has pushed people into the heat and storms of the afternoon. And no-shows — people booking reservations without canceling — have led to daily limits not being met, he indicates.

“Apparently,” he writes, “Colorado Springs is willing to accept a drop in Incline usage, and in the tourism and recreational value of this outdoor asset, even well below the limits prescribed in the MOU.”

Officials on either side of the Incline have distanced themselves from the report.

But “Bruce obviously has spent a lot of time, that’s for sure,” said Bill Beagle, president of the friends group from which Barron has since resigned. “I think he makes some suggestions that might bear looking at. It never hurts to run something up the flag pole, right?”

Colorado Springs officials have recognized Barron’s findings on the no-show rate — between 20% to 25% of total reservations, they reported in August.

On Sept. 10, parks board members were given numbers since reservations started Aug. 6: about 31,000 slots booked, about 5,000 canceled.

How long would these restrictions last?, board members asked. Would it still be necessary to keep staff at the Incline’s base through winter?

“That seems like quite a waste of resources,” board member Carol Beckman said.

Parks director Karen Palus reiterated a line from the MOU: that the reservation system “shall remain in effect until a long-term solution is agreed upon.”

But the federal aid money paying for staff would not be around by 2021, Palus said. “Is it sustainable in the long term? Not through the free system as it is, unless there’s some other funding stream that comes forward.”

And funds were not around for a “full-blown” public process reanalyzing 2011’s intergovernmental agreement, as Palus said would be necessary to meet a desire expressed by Manitou leadership.

So the future of the Incline is yet again uncertain.

Austin, for one, has lost interest. He’s busy with other trails.

“I don’t need to do the Incline anymore,” he said. “There’s too much drama there.”

Rules for the climb

Some of the new requirements for accessing the Manitou Incline:

• Reservations made online at: coloradosprings.gov/parks/page/manitou-incline

• If parking a car, proof required from Hiawatha Gardens or Iron Springs Chateau

Happy Apple Farm in Penrose lost its apple crop this year, but is still busier than ever as visitors crave something to do during the coronavirus pandemic.