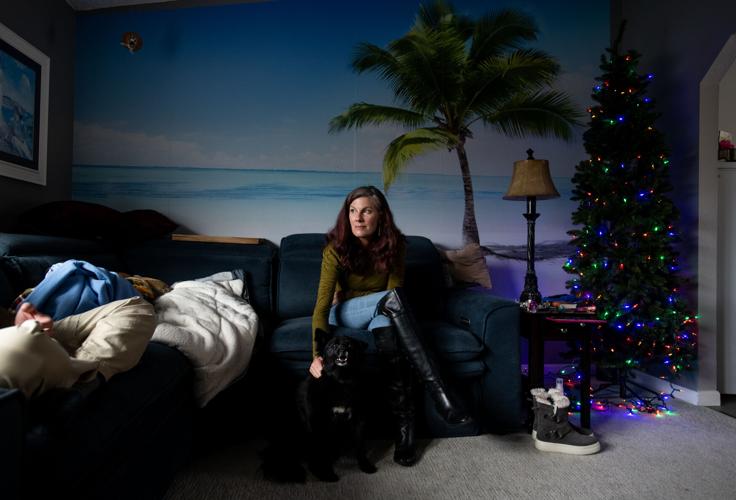 Joanna Fix sits on the couch with her fiercely protective rescue dog Maisy standing guard near her feet at her home in Colorado Springs. After trying time and time again to decorate the wall behind her couch with photos that would prove to be overstimulating, Fix ordered a tropical mural for the room. “It makes me feel calm,” she said. Fix was diagnosed with young-onset Alzheimer’s disease at age 48. 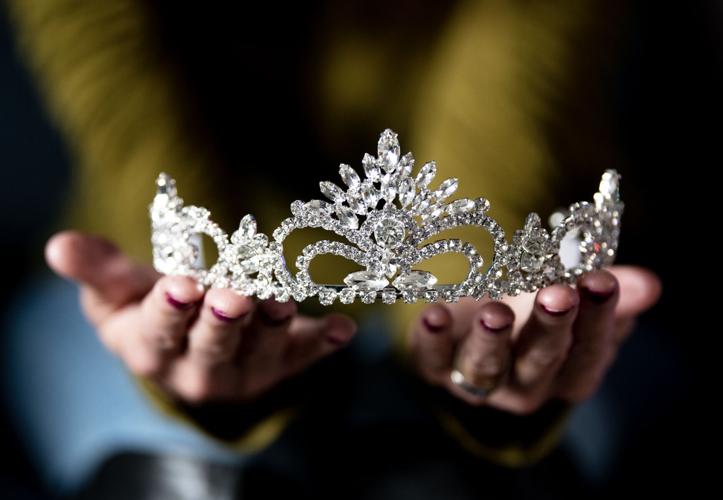 Joanna Fix holds her Mrs. Colorado Springs crown at her home last month. As part of her mission to fight the stigma of dementia, Fix will be competing in the Mrs. Colorado competition in Denver in April. 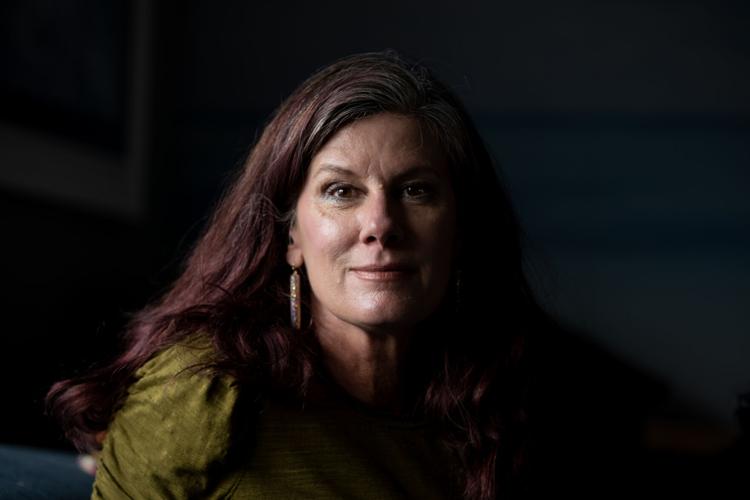 Joanna Fix at her home in Colorado Springs on Thursday, Oct. 27, 2022. Fix was diagnosed with Alzheimers when she was 48. (The Gazette, Parker Seibold) 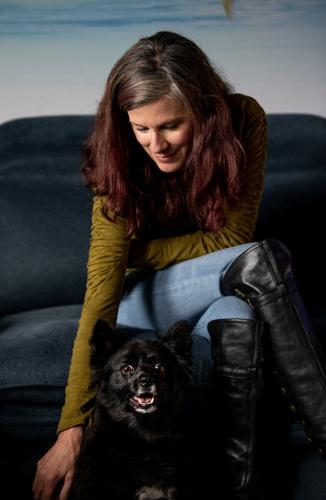 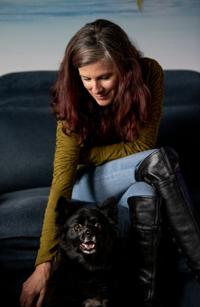 Joanna Fix leans down to pet her rescue dog Maisy at her home in Colorado Springs. Fix believes that having her dogs as companions at home has helped her stay healthy and more cognitively aware. 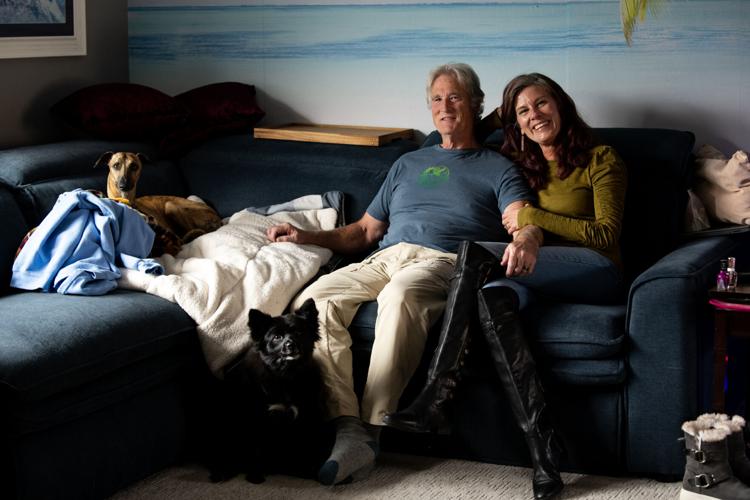 Joanna Fix and her husband Forrest sit on the couch with their dogs Cool Whip and Maisy at their home in Colorado Springs on Thursday, Oct. 27, 2022. Forest is now Joanna’s full-time caregiver. (The Gazette, Parker Seibold) 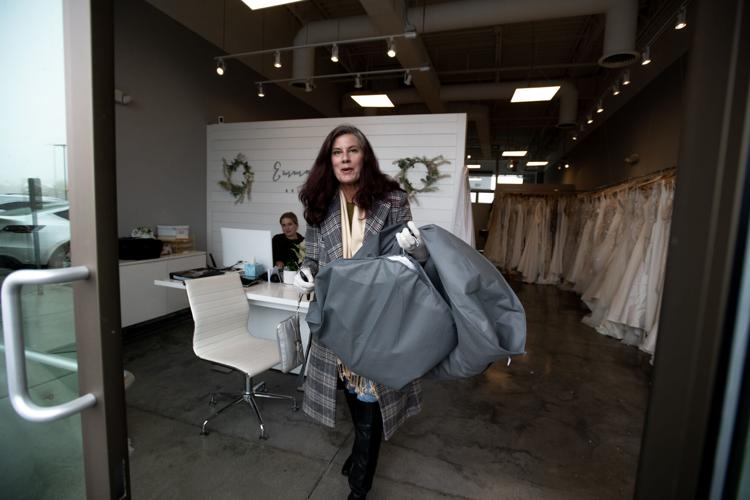 Joanna Fix picks up her evening gown for the Mrs. Colorado pageant at Grace and Emma Bridal Studio in Colorado Springs last month.

Joanna Fix sits on the couch with her fiercely protective rescue dog Maisy standing guard near her feet at her home in Colorado Springs. After trying time and time again to decorate the wall behind her couch with photos that would prove to be overstimulating, Fix ordered a tropical mural for the room. “It makes me feel calm,” she said. Fix was diagnosed with young-onset Alzheimer’s disease at age 48.

Joanna Fix picks up her evening gown for the Mrs. Colorado pageant at Grace and Emma Bridal Studio in Colorado Springs last month.

A decade ago, Joanna Fix didn’t think twice about her morning routine.

She’d wake up, take her dog for a walk, make breakfast, get ready for work and drive to the University of the Pacific in Stockton, Calif., where she was a psychology professor. In her free time she did psychological testing for local law enforcement. Life was good. Easy. Until it fell apart.

“I was going to sleep in my clothes because I couldn’t get myself dressed and get to the university within two hours,” said Fix, now a Colorado Springs resident.

Ten years ago, she could never have predicted her future Mrs. Colorado Springs title, which she received in June, or that she’d be preparing to compete at Mrs. Colorado in Denver in April. She also couldn’t have known her platform would be the young-onset Alzheimer’s disease she was diagnosed with at age 48.

‘I’m still trying to wrap my head around it (the title),” Fix said. “The only reason I want to compete is to educate the world about dementia and to combat the stigma and make this journey better for everybody involved.”

More than 1 in 9 people in the U.S. 65 and older have Alzheimer’s, according to the Alzheimer’s Association, and women make up two-thirds of diagnoses.

Young-onset is rare, but about 5% of those with the disease are younger than 65.

Should Fix win the title next year, she’ll head to the Mrs. America competition in August, which would provide a greater avenue to provide tools for those living with and around the disease, including her own perspective on what it’s like to be squarely in the arms of the brain disorder.

“If the roles were reversed I’d want that information,” Fix said. “To understand what it’s like inside here. Nobody’s been either willing or able to share that before. I need to do as much as I can for as long as I can. It’s my obligation that I’m happy to take on.”

Describing what the disease is like on the inside isn’t easy.

“It’s like I’m in jail,” Fix said. “I miss who I used to be, but I don’t wish life was different because it’s so good now. I still remember my life before I got sick. I would have periods of boredom, which was really weird. I have not felt that since I’ve been living with Alzheimer’s. I never get bored.”

Fix’s long, arduous journey to a diagnosis began with extreme exhaustion, a symptom most people don’t associate with Alzheimer’s. It was followed by problems with her executive functioning — the part of the brain that helps us carry out tasks, processes and sequencing. But being as she was in her early 40s, and seemingly too young to suffer from anything dementia-related, she chalked up the changes to too much work and not enough play. Her doctors agreed. Get some rest, they said.

Two years later, at 43, her university employer asked her to voluntarily retire due to the number of mistakes she was making. She decided to take advantage of the break and take the summer off. Rest herself back to health. Move to Westminster, Colo., to be around family.

That was 2012. By the time fall rolled around, she was worse. Driving was challenging — too much sensory stimulation and her peripheral vision was spotty. She kept missing stairs in her apartment complex due to changes in her occipital lobe, which is affected early on in Alzheimer’s and dementia. She couldn’t process what she saw and kept falling.

Finally, at the end of 2012, after doctors recommended she have her spleen removed for reasons still murky to Fix, she hoped it would be the magic solution, and she’d return to her normal self. That didn’t happen. After a follow-up MRI, a neurologist showed her the imaging of her brain: “He said this isn’t right. You’re 43 and this is like an 86-year-old brain.”

Though he didn’t say Alzheimer’s out loud, he wrote it in her notes. By that point, she’d moved to the Springs, met her now husband and watched her health decline. She could still barely stay awake, had trouble using household appliances and cooking because utensils were too much, and couldn’t work full time. She found as many part-time, temporary jobs and volunteer work as her health would allow, just to keep some semblance of a routine.

“We were all, including me, starting to think I was crazy, like this was a mental illness rather than organic illness, which is what Alzheimer’s is,” she said. “It’s a structural organic thing.”

Relieved and devastated to finally know what was wrong, she called Forrest Fix, her boyfriend of 18 months. After they hung up, Forrest called Joanna’s father and asked for his blessing to marry her, which they did the following year.

“It takes a while to understand what an Alzheimer’s diagnosis means,” said Forrest, a retired chiropractor who’s now his wife’s caregiver.

“I said now we know what we’re dealing with. We’ll figure out a way to handle it.”

Six years later, the Fixes live with their two dogs in a house with a front yard that’s been deliberately sculpted to be safe and easy for Joanna to navigate. Maisy, a Pomeranian Aussie mix they rescued, is fiercely protective of her mama, while Cool Whip, their whippet, does his best to mellow out his buddy.

Joanna feels better these days. She’s figured out ways to optimize her life, and also forgive herself for the days she can’t get out of bed. Part of her routine includes volunteering for national organizations, such as Positive Approach to Care and National Council of Dementia Minds.

“It’s a good thing to be part of the world still, and be a productive member of society,” she said. “That’s huge for my emotional and physical well-being.”

Learning to navigate living with the disease also includes teaching others how to care for their loved one with Alzheimer’s.

“What helps is slowing down, being patient, using fewer words and not having an agenda,” Joanna said. “And the holidays can be really stressful, with a lot of the expectations and sensory overload, people, food and just the busyness. It’s been a process communicating with family about the adjustments we need to make.”

She wants people to understand a few things about the disease, including that having it means the person is always working, even when it might not appear that way. Nothing is involuntary anymore. Voluntary everyday actions require thought.

Joanna also urges people to not stop visiting because their friend or family member with Alzheimer’s can no longer show they recognize people or remember activities they’ve done together.

“It’s devastating to have someone look at you and not be able to give you that feedback that we are so used to having, but don’t let that keep you from going and visiting and still caring about that person,” she said. “There are days I cannot demonstrate to my spouse what I’m feeling or thinking and needing, but he’ll figure it out. And I’m still in here.”