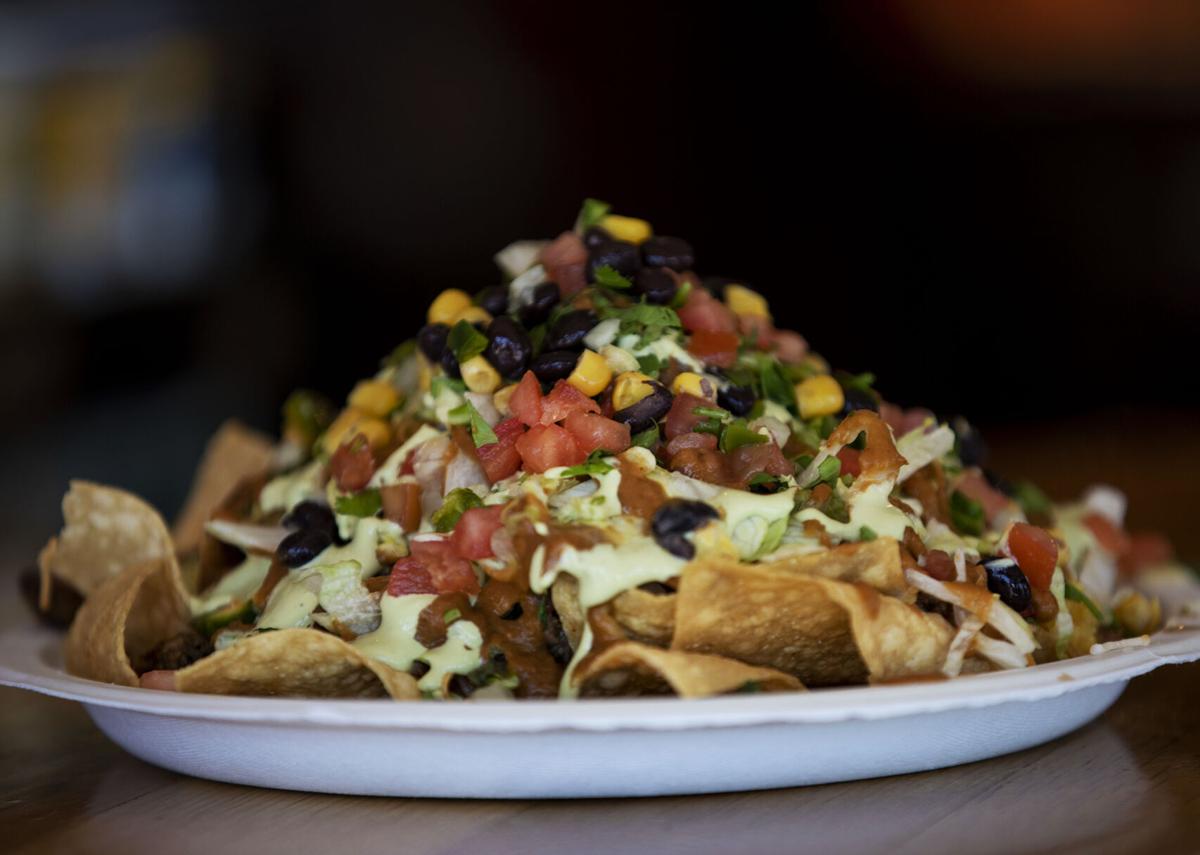 Loaded nachos at Arlene’s Beans, Salsa and Catering in Monument. Owner Arlene Padilla and her authentic Mexican food have earned many awards. 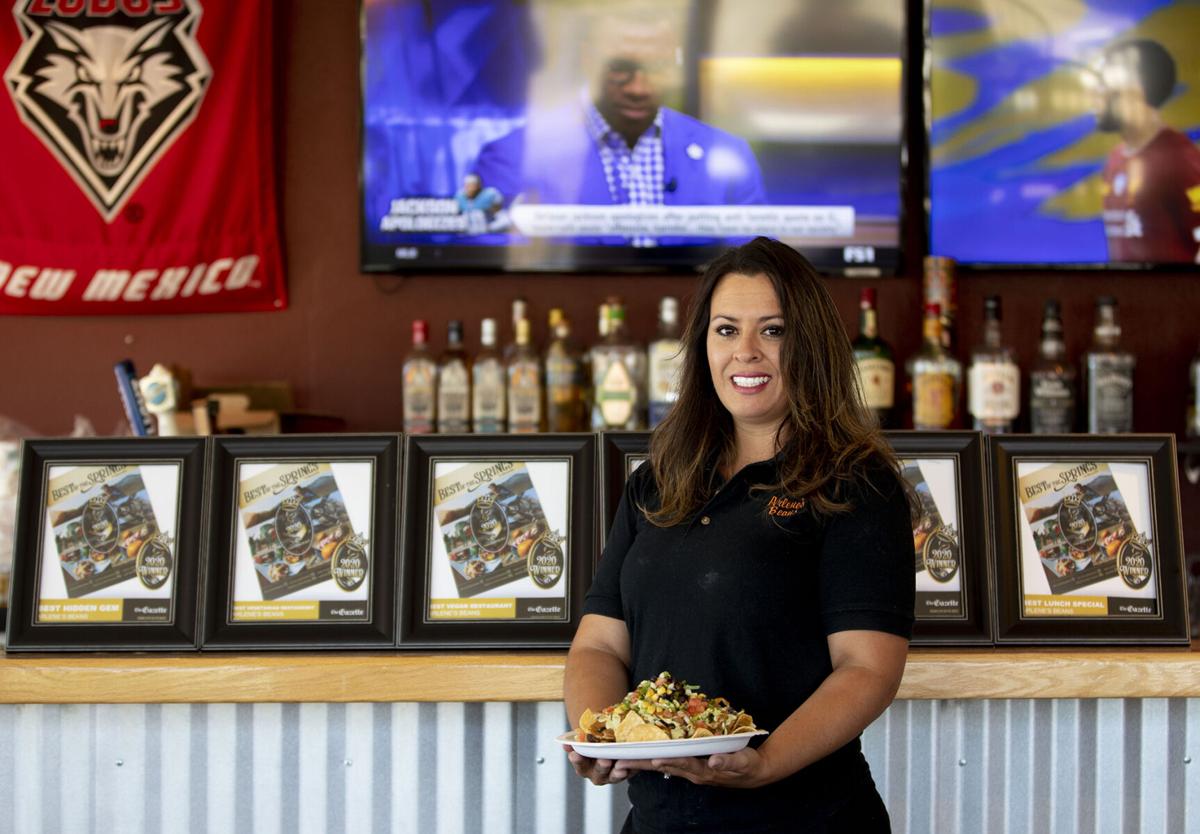 Arlene Padilla, owner of Arlene’s Beans, Salsa and Catering, poses for a portrait with a plate full of loaded nachos at her restaurant located on Second Street in Monument. Padilla’s made-from-scratch recipes are inspired by her husband and her immigrant Mexican mother and father. 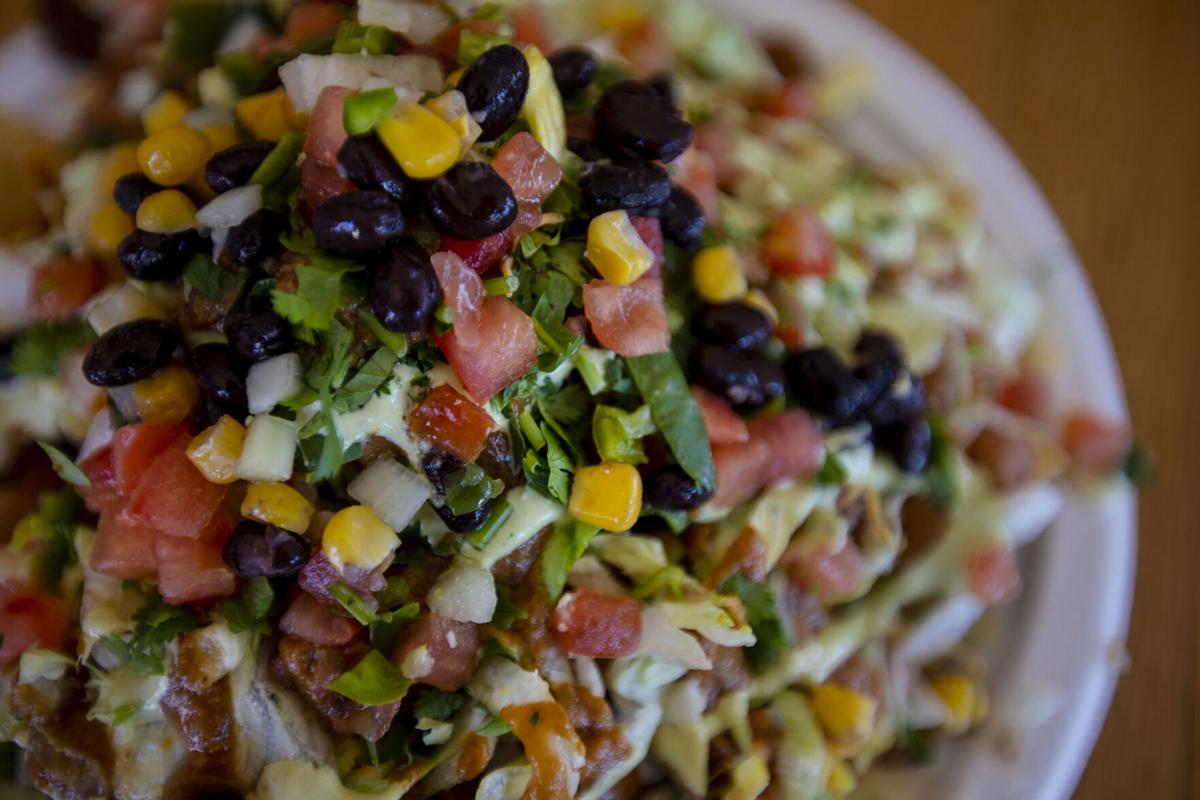 Loaded nachos at Arlene’s Beans, Salsa and Catering in Monument. Owner Arlene Padilla and her authentic Mexican food have earned many awards.

Arlene Padilla, owner of Arlene’s Beans, Salsa and Catering, poses for a portrait with a plate full of loaded nachos at her restaurant located on Second Street in Monument. Padilla’s made-from-scratch recipes are inspired by her husband and her immigrant Mexican mother and father.

Arlene Padilla is one hardworking go-getter.

Consider that in 2016, at age 37, this stay-at-home mother of six opened her first restaurant in Palmer Lake — after finding success selling bean-and- cheese burritos door to door.

With her determination, can-do attitude, faith in God, support from family and love of cooking for people, her eatery was born.

Arlene’s Beans, Salsa and Catering began as “basically a food truck on a foundation,” the site of a former filling station, she said.

Within a year, she outgrew that location and moved to Second Street in Monument. Her authentic Mexican food has since earned plenty of awards — four Gazette Best of the Springs awards in 2019 and six more in 2020.

Padilla’s from-scratch New Mexican recipes are inspired by her husband and her immigrant Mexican mother and father.

In 1971, Arlene’s parents immigrated from Chihuahua, Mexico, to Albuquerque, N.M. That was her home until 1999, when her husband, Bobby, was transferred to Colorado Springs by his employer, Voice- Stream Wireless.

“I met Bobby when I was 17 and he was 19,” she said. “We were young, but we have had a strong marriage. I finished two and a half years of college majoring in communications, before opting to be a stay-at-home mom.”

Bobby’s mother, who is Colombian, had a New Mexican food restaurant, El Mariachi, in Albuquerque.

Needless to say, she influenced the dishes that would later be served at Arlene’s eatery.

For instance, the rice.

“Spanish rice that I grew up with is made with tomato and chicken stock,” Arlene said. “Colombian rice is vegan and seasoned with turmeric and saffron. It’s what I serve at the restaurant and I’m very picky about how it’s prepared.”

“She was a party animal,” Arlene said. “With her Colombian culture, everything is reason for a party. Bobby and I were making drinks at parties when we were underage. That’s how we came up with Mean Arlene’s Margarita, which is a bestseller here. It’s always been made with fresh lime and orange juice, no mixer.”

In fact, Bobby won a silver for bartending in this year’s Gazette Best of the Springs honors.

“We have always loved to entertain, and I love to cook,” Arlene said. “Since 2001, Bobby has said, ‘You need a restaurant.’”

Arlene started sharing her bean-and-cheese burritos at school activities and her dentist’s office in 2016.

What sealed the deal for opening a restaurant was a May 2016 graduation party and community garage sale.

“When Maylene (her oldest daughter) graduated from high school, we threw a big party,” Arlene said. “We invited 170 guests and 160 RSVP’d. I had my aunts and mom come help prepare food. We cooked for four days.”

Afterward, there were a lot of beans left over.

“The next weekend, there was a community garage sale,” she said. “I woke up on Friday before the sale and realized we didn’t have anything ready to sell. I decided we could make burritos and salsa to sell.”

At 6 a.m. the next morning, Arlene and her two daughters jumped out of bed and rolled up 90 burritos.

“We sold out in less than an hour,” she said. “At a dollar each, the girls had made $90 and couldn’t believe how much they had made in an hour. ... They asked if they could do it again.”

That October, the family leased the Palmer Lake location. Bobby was working on his master’s degree in business at the same time. Creating a business plan for a restaurant became his capstone project for graduation, Arlene said.

“First off, I have to give thanks to God,” Arlene said. “No question, without his guidance, wisdom, protection and direction, Arlene’s Beans would not be here.”

Padilla had her seventh baby a year ago. Her oldest is now 22. The challenges have been many.

The challenges she faced at the Palmer Lake location went away with the move. Cooking space had been limited and she was the only one doing the cooking, which meant people waited in lines for food.

The Monument location provided a proper kitchen and enabled her to keep up with the flow. She has plenty of help from her family too. Maylene is now the general manager.

“At 22, she has been able to buy her first home,” Arlene said. “Bobby has left his other jobs and works here full time. Jasmine, my 16-year old, helps with work in the kitchen when she isn’t in school.”

The Padillas have no intention of slowing down. They’ve talked about opening a sister restaurant in the Springs.

“We’ll see how business goes,” Arlene said. “If it’s intended to happen, God will tell us.”

“I was buying burritos and other food items from her front door before she opened Arlene’s Beans,” Brandon said. “I’m originally from L.A. and know real Mexican food, and Arlene’s red chile sauce is spot-on.”

“Her work ethic, dedication and love for cooking comes through in all her amazing dishes,” she said.

“She is the mom of a Marine and a big supporter of the community and is always working with our nonprofits to help those in need. She makes our community a better place.”

Q. Three words to describe you?

Q. Proudest moment as a chef?

A. Hosting cooking classes with kindergartners and seeing smiles on their faces along with their teachers as they embraced the Mexican heritage and culture.

A. Black truffle — it is stale, not appealing and tastes like cardboard

Q. One food you detest?

Q. Foods you can't live without?

Q. Most embarrassing moment in the kitchen?

A. At our first location, the kitchen was open with no privacy. Each day we had a show. I dropped a 12-quart stainless steel pressure cooker full of cooked beans. Thankfully, it was already depressurized but as it slipped through my fingers the lid unlocked, fell on the concrete brick floor and beans ricocheted off the roof.

A. Rachael Ray — she’s bubbly and seems like she’d be very fun to have a glass of wine with.

A. How to properly deal with the public

A. Albuquerque, N.M., for its diverse cuisine and culture.

Q. Favorite music to cook by?

A. Cocinas de New Mexico. The author is unknown; it is a community recipe book

Q. What show would you pitch to the Food Network?

A. Arlene’s Mean Cuisine. I make American, Asian-fusion, with Indian and Italian, which I love to call MexItalian

A. Rabbit in the desert with my dad.

Q. You're making an omelette — what's in it?

A. At my Arlene’s Beans bar. Someone we know usually comes in and we suck them in with conversation and great libation and we only live a mile away.

Ambli Global Cuisine, 5278 N. Nevada Ave., has opened in University Village, serving foods that will take you on a magic carpet tour of flavor…