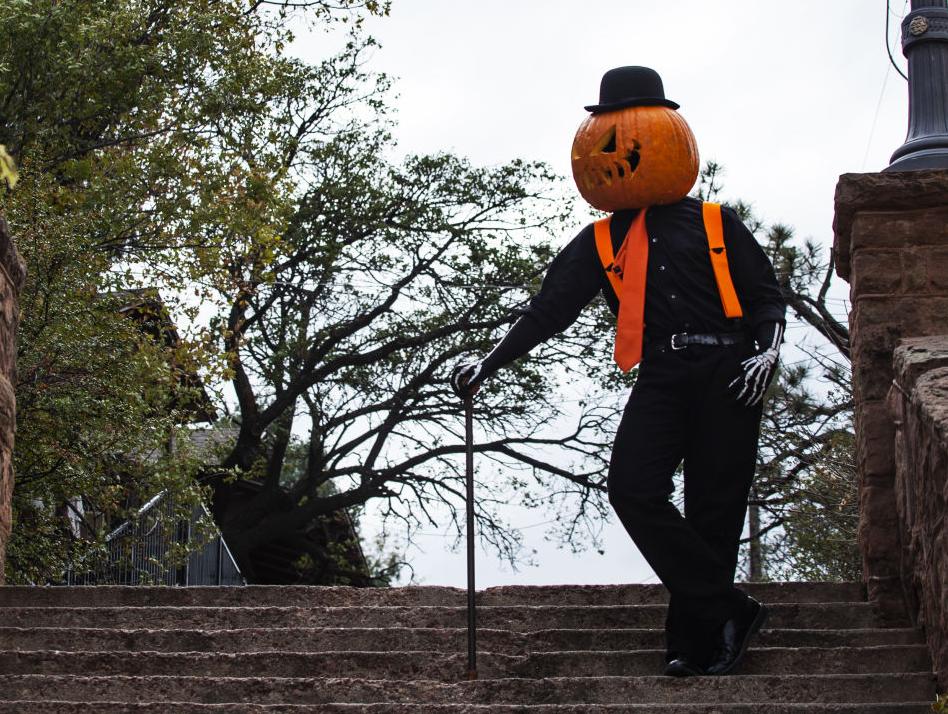 Pumpkinhead Jack poses at the top of a staircase in Manitou Springs this month. 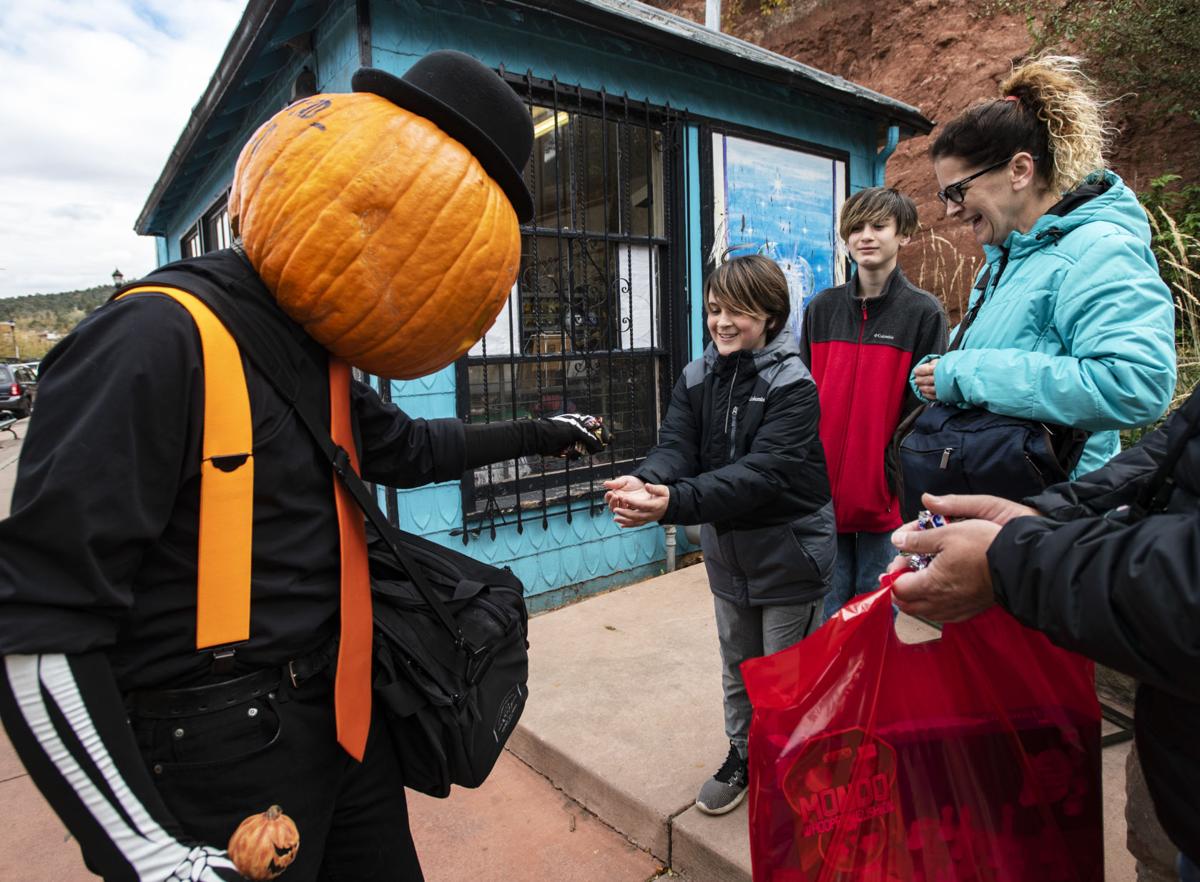 Pumpkinhead Jack gives candy to a family in Manitou Springs this month. 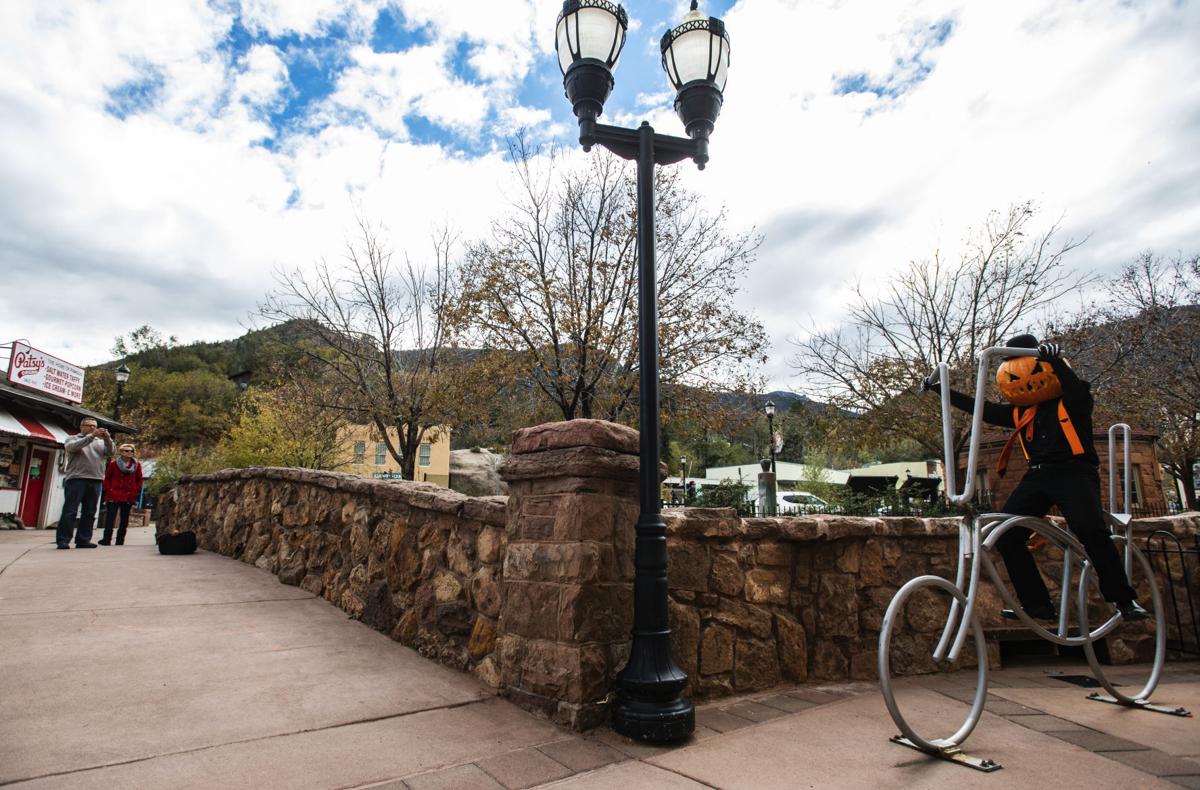 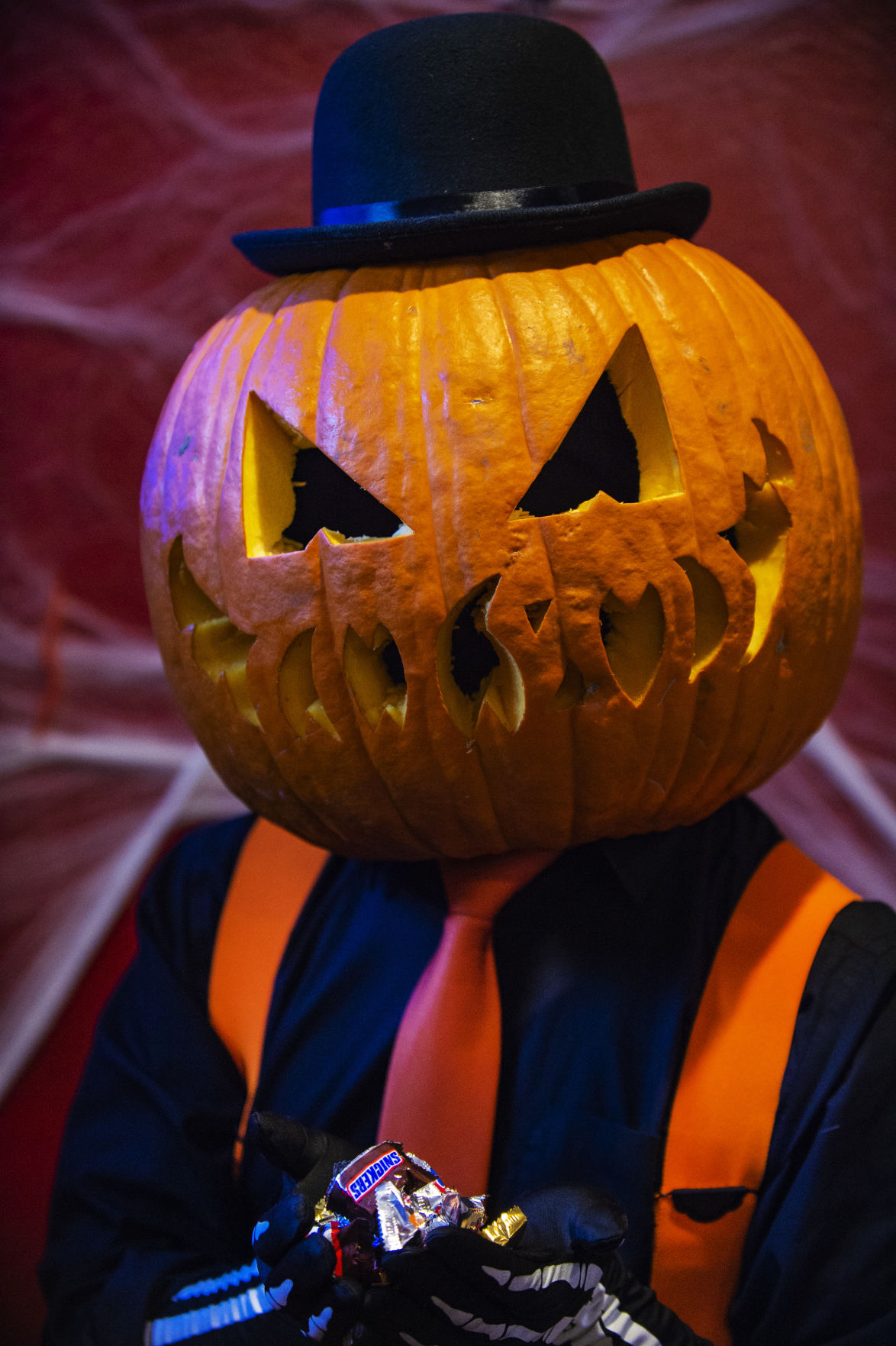 Pumpkinhead Jack poses with a handful of his candy in Manitou Springs this month. Pumpkin Head buys his own candy and spent $442 on it this year. 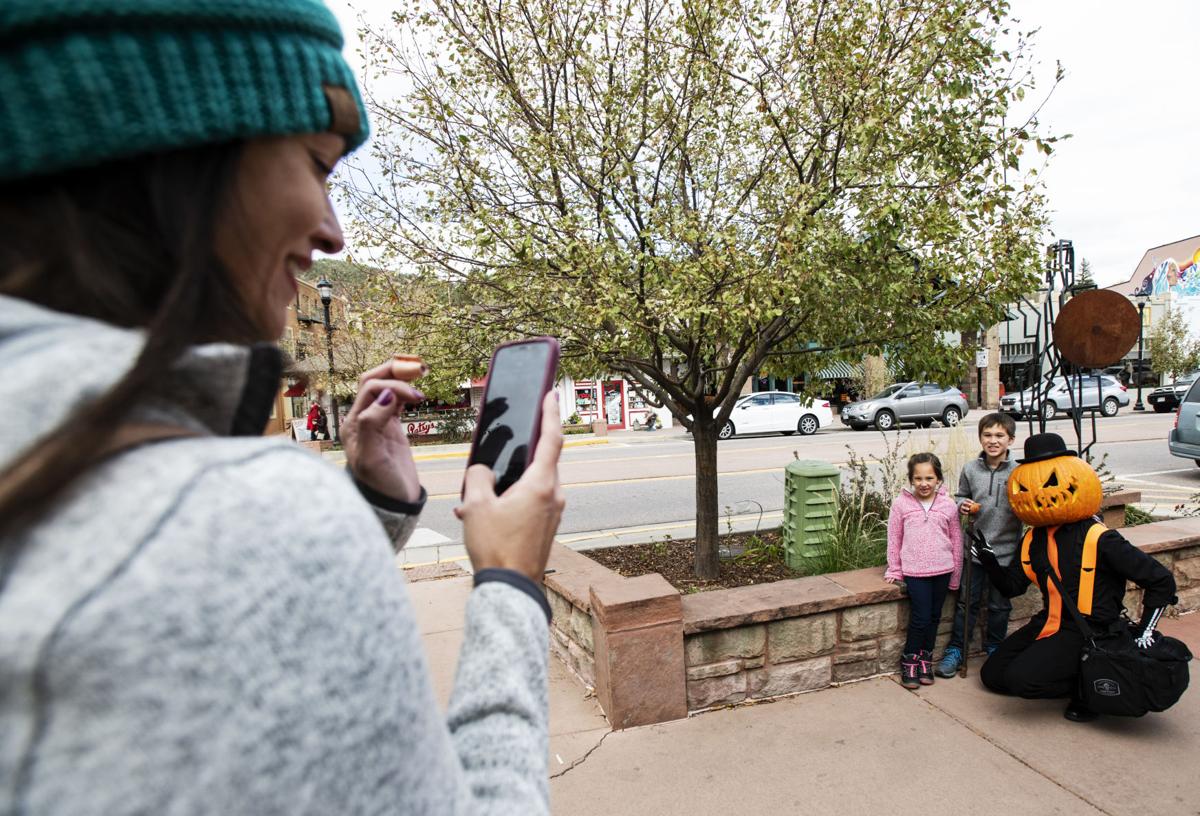 Pumpkinhead Jack poses at the top of a staircase in Manitou Springs this month.

Pumpkinhead Jack gives candy to a family in Manitou Springs this month.

The legend of Pumpkinhead Jack begins something like this: A teenager lying on his bed, like any teenager contemplating his place in the world, tosses a ball of socks to the ceiling fan in a game by himself.

You see, on a Friday night, there was not much else to do for the boy who would become Pumpkinhead Jack, the creature of lore seen sweeping these streets of Colorado Springs every October, posing for pictures and handing out candy from a bulky bag strapped around his shoulders, as if the weight of the pumpkin weren’t enough already. (His Walmart receipt for the sweets this month read $442.28.)

That’s one question he gets: Isn’t the pumpkin heavy? The answer: Yes, about 10 pounds!

Also: Doesn’t it smell? Yes, it smells like pumpkin!

What company do you work for? None!

Oh. Well, will you come to my party? Yes!

What’s your charge? Nothing!

And as Buchanan likes to say in his collared shirt, slacks and suspenders: I’m dressed for all occasions!

“The bars are actually fun to go into because people are all talking, having a good time,” he says, “and then the orange-headed freak walks through the door!”

That’s why he’s in a bar now, because he’s found the best conversations happen in bars. Though, he doesn’t drink. He orders a water — one must stay hydrated with a pumpkin head. He tips a candy mound and heads back out to spread Halloween cheer.

Before he goes, the waitress comes over.

“The boys at the table over there want to take a picture,” she says.

“But of course!” replies Pumpkinhead Jack, leaving friend Brandon Phair at the table.

Phair came along because Buchanan never talked to a reporter and was quite nervous. It’s easy to be misunderstood, after all.

Just be you, Phair told him. Be Pumpkinhead Jack.

October, the friend says, is a time he can just be him. "And I think to him, it’s the most giving time of the year.”

Ask Buchanan’s parents, and they’ll say Pumpkinhead Jack gives their son purpose beyond his day job as a hotel audio and visual technician.

“It gives him so much joy,” says his mother, Vickie. “Just to see other people happy and smiling, he thrives on that.”

“If you knew anything about my son,” says his father, Leigh, “it’s that he’s easygoing and doesn’t like to take things too seriously. Only bad thing is, maybe people take advantage of him.”

Maybe that friend from high school wasn’t such a good friend after all.

“His only way of interacting was by putting somebody down,” Buchanan recalls. “Ahh, guess who the candidate for that was?”

You see, the boy who would become Pumpkinhead Jack didn’t so much like life in the Florida Panhandle. Moving there during his adolescent years, it proved to be a culture shock.

“Oh man, you know how many times I was told I’m going to hell?” Buchanan says.

Which is kind of funny now, considering his alter ego.

He traces the character to the old Irish tale of Stingy Jack, a drunkard who was permitted neither in heaven nor in hell, for he had made a deal with the devil. So Jack is confined to this world between good and evil, his path lighted by what we now call a jack-o-lantern.

But to discover Pumpkinhead Jack, Buchanan first had to navigate the cliques. He tried to be cool, tried to be funny, establishing this sarcastic tone, “tried to be an (expletive), tried to be religious,” he says. “I realized it was too hard, so I’d rather be an outcast.”

Yes, he would be the best outcast he could be. Out of high school, college didn’t seem right, but the midnight shift at Walmart did. And Halloween felt very right.

“You kind of relate with these characters,” Buchanan says.

And as it turned out, a pumpkin head was the opposite of uncomfortable.

You see, Buchanan knows that everyone roams a world between good and evil. And yet in the pumpkin head, it seems everyone around him is happy.

They don’t see his face behind the pumpkin and the black morph mask. But if they did, they would see the face of a man who appears to be going on 20 rather than 30 — a twinkle in those blue-gray eyes, a mat of dark hair and a bit of scruff. “Just another white guy,” Buchanan likes to say.

Yet when Buchanan approaches the boys, when he makes them less shy by asking how they’re doing, when he gives them more candy than their hands can hold, and when he puts his arms around them and looks at the camera, he is smiling.

New Orleans: In search of shade(s) in America's "most haunted" city

NEW ORLEANS • This city wears many masks, and her countenance can depend greatly on what you seek.