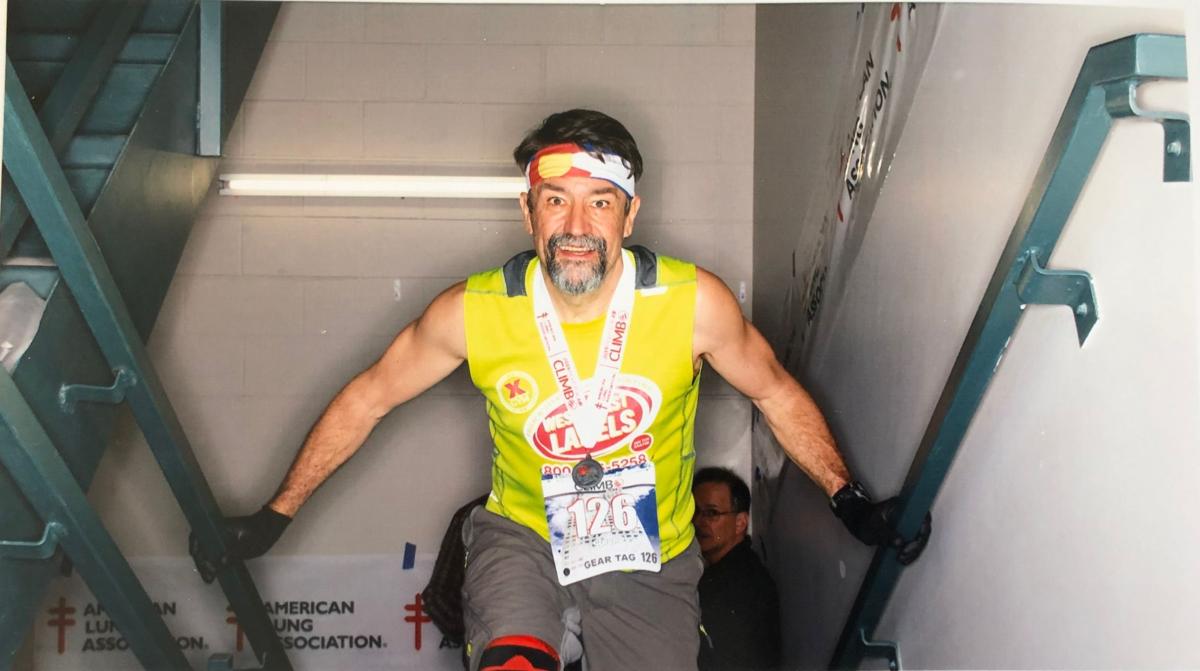 Steve Stermer travels the country for tower races up staircases. Next up: New York City’s Empire State Building, where the sport of tower racing began. 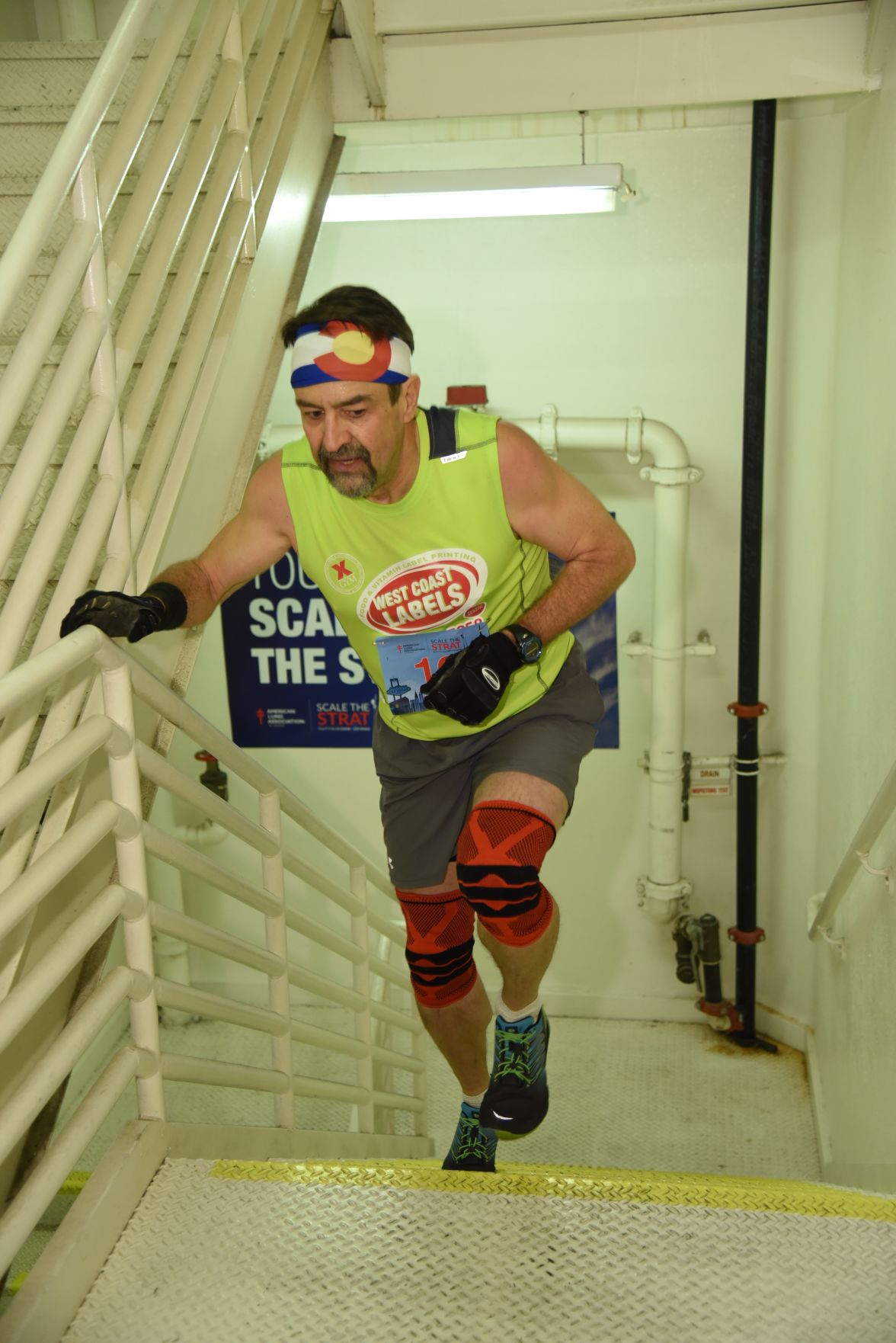 Steve Stermer races up the stairs of Las Vegas’ Stratosphere Tower. Tower running has been described as “the hardest sport you’ve never heard of.” 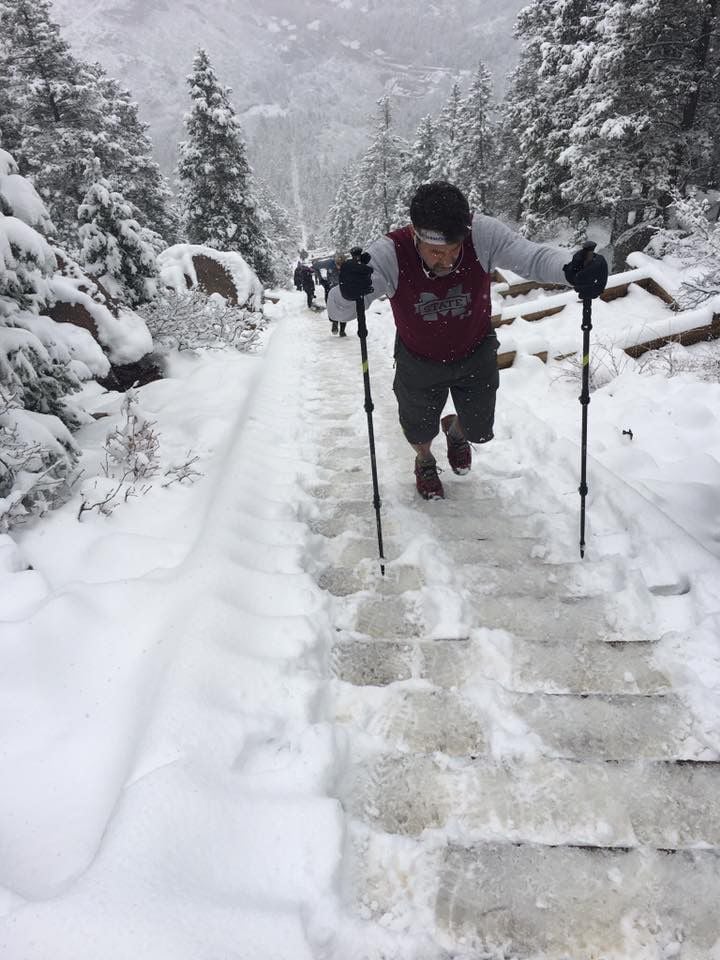 The snow doesn’t stop Steve Stermer from racing up the Manitou Incline. He scales it at least twice a day — three or four times on Saturdays and Sundays.

Steve Stermer is seen on the Manitou Incline every morning when he’s in town. When he’s not, he’s probably racing up stairs in one of the country’s highest towers.

Steve Stermer travels the country for tower races up staircases. Next up: New York City’s Empire State Building, where the sport of tower racing began.

Steve Stermer races up the stairs of Las Vegas’ Stratosphere Tower. Tower running has been described as “the hardest sport you’ve never heard of.”

The snow doesn’t stop Steve Stermer from racing up the Manitou Incline. He scales it at least twice a day — three or four times on Saturdays and Sundays.

Tower running. Stair racing. Call it what you prefer.

It’s been going on in this country in an organized manner since 1978, when an eccentric New Yorker named Fred Lebow invited 15 vertical pushers to the base of the Empire State Building’s 1,576 steps. (The first winner set the standard at 12 minutes, 32 seconds.)

That’s where Stermer, 61, will be Tuesday. Of the thousands who put their name in the lottery, the Colorado Springs man was one of the lucky ones drawn for the Empire State Building Run-Up.

Lucky? Stermer considers himself that, but you should see the scene at the end of these races.

“There’s a lot of carnage,” he says. “People cross (the finish line) and collapse in heaps.”

He loves it. That’s why he’s on the Manitou Incline every morning.

“All the top climbers in the U.S. are kind of envious of me because I have this in my backyard,” he says.

He’s among them, by the way, perennially one of the top 15 or 20 stair-running men. Towerrunning USA currently has him No. 2 in his age group.

Stermer was No. 1 in 2016, the last time he ran the Empire State Building as one of the few elites invited. Among the dozen-plus tower races he does every year, this one’s special. For the exclusiveness, yes. And yes, for the historic element.

But also for its uniqueness: Unlike every other race where they dash up the staircase in waves, all 200 here start at the same time, causing a great, jumbled mess at the doorway. Also unlike every other race, the Run-Up starts at night, leading to an unforgettable, shimmering view of the city.

Stermer will take off with the others at 8 p.m. local time Tuesday, a five-day vacation he has planned all for the sake of a brutal 15 minutes. That’s what he’s aiming for, anyway. Three years ago he finished in 15 minutes, 21 seconds, good for 34th place.

He fully expects this to be his last attempt in the Empire State Building. “This whole age thing is no joke,” he says.

But if you saw Stermer on the Incline, you wouldn’t think he was slowing. Twice a day he ascends the railroad ties that gain nearly 2,000 feet in less than a mile.

Make that three or four times on Saturdays and Sundays.

He got serious about the Incline after 2009. That year he got a company email asking employees to join the team for the annual race in Denver’s tallest skyscraper, Republic Plaza.

“I thought, ‘It’s just climbing stairs. How hard could that be?’ About 15 floors into the race, I realized it was not easy.

“I started looking where other races in the country were, and I found out they have them in almost every state. All these big, iconic buildings have races. I thought that’d be cool to say I climbed the biggest buildings in the United States.”

The biggest, One World Trade Center, all 2,226 of its steps. The 105 floors of the next biggest, Chicago’s Willis Tower. Buildings in Los Angeles, Dallas, Indianapolis, San Francisco, Las Vegas. Stermer has scaled them and many more, 28 towers in 12 states. The Empire State Building will be his 81st race.

“The reason I keep doing it is just the community of people and the friends that you make,” he says.

He always has a place to stay when he travels, because he always knows some fellow tower runner.

Of course, it’s usually him doing the hosting.

“They all wanna climb the Incline,” he says.

A glance at a few of Steve Stermer’s premier races over the years:

In 1919, an avid group of Colorado Springs hikers calling themselves the Cheyenne Mountain Club became the Pikes Peak branch of the Colorado Mountain Club. A century later, the group continues to give proper introductions to the great outdoors.