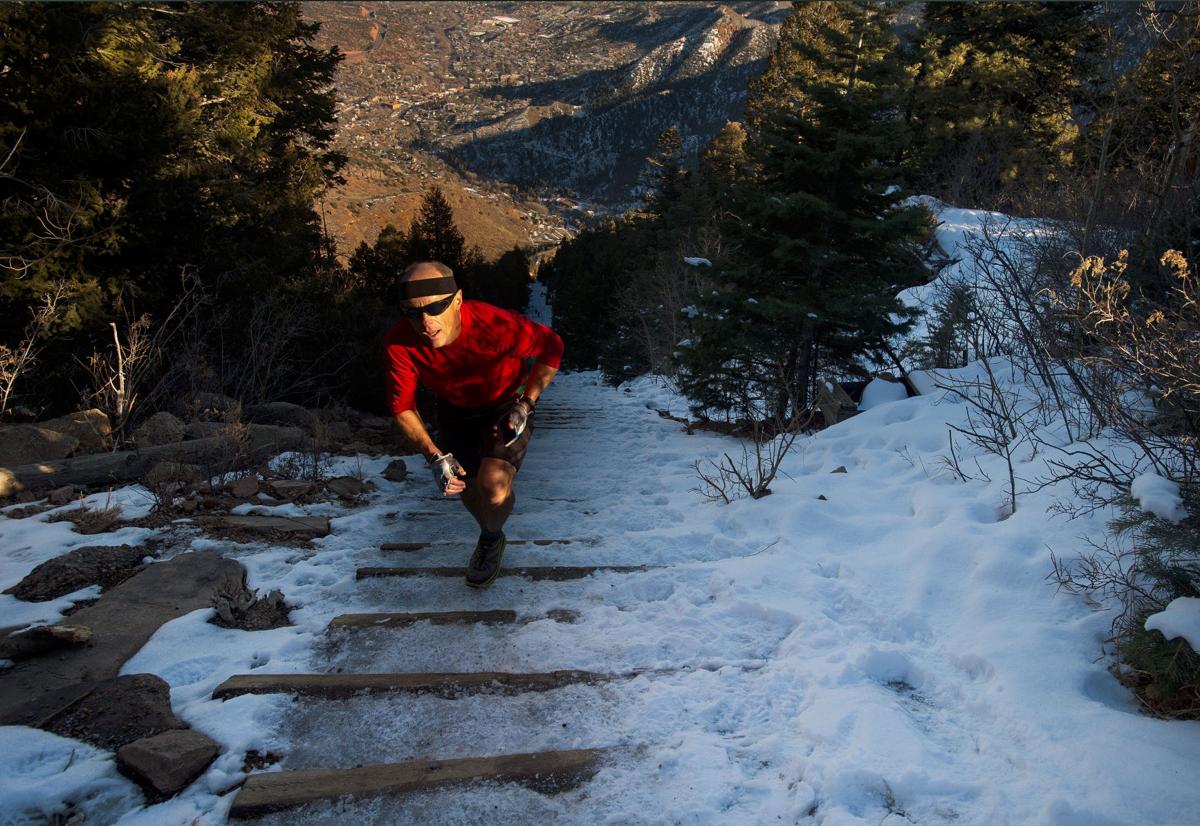 Greg Cummings nears the summit of the Manitou Incline in January 2015. Cummings, who has Type 1 diabetes, climbs the 2,000 vertical feet in less than a mile to raise awareness of his disease and money for a summer camp for kids with cancer. 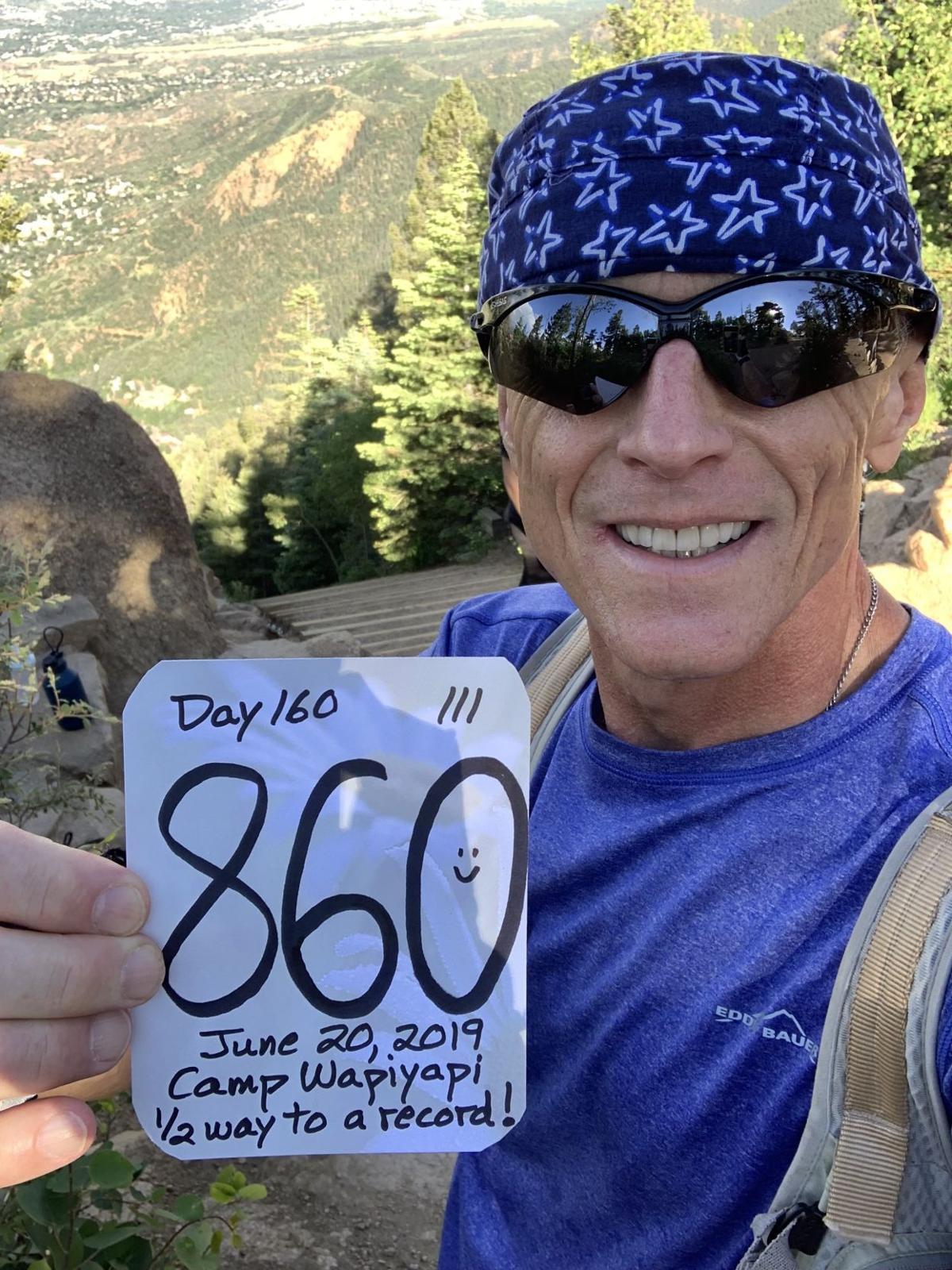 Greg Cummings takes a selfie with a card showing him to be at the halfway point of beating the record for most Manitou Incline ascents in a year.

Greg Cummings nears the summit of the Manitou Incline in January 2015. Cummings, who has Type 1 diabetes, climbs the 2,000 vertical feet in less than a mile to raise awareness of his disease and money for a summer camp for kids with cancer.

Greg Cummings takes a selfie with a card showing him to be at the halfway point of beating the record for most Manitou Incline ascents in a year.

If you’ve been on the Manitou Incline the past six months, you’ve probably seen Greg Cummings.

He’s the retired man who looks like an athlete in his prime, wearing sunglasses and a skullcap, a pack on his back filled with the things keeping him alive.

That’s mostly granola bars, fruit snacks, Snickers, bottles of agave syrup and sugar-packed tablets. All of it he consumes to keep his blood glucose levels in check while attempting to climb the brutal trail more than anyone in a calendar year.

“Type 1 diabetes is hard enough to manage when you’re living a normal life,” Cummings said Friday, a morning after crossing the halfway point to the record. “But when you add 10,000, 15,000 feet of vertical feet you’re ascending every day, and then of course descending that, too, and trying to manage this illness pretty much every step of the way, it just creates a complexity that’s hard to describe. It just beats me up constantly.”

Can this man beat the Manitou Incline record for ascents in a year?

It’s been harder than he expected when he set out on the mission Jan. 12 with his wife’s reluctant blessing. The mental and emotional toll was heavy on both during Cummings’ record-setting climbs in 2010 (601) and 2014 (1,400). The next year, his friend, Roger Austin, claimed 1,719 ascents.

Now Cummings, 62, is on his way to setting a new mark. Friday, he planned seven trips up and down the ties gaining more than 2,000 feet in less than a mile. That would put his total at 870 so far on the year. (Each summit, he takes selfies with cards showing the number to track and prove his progress).

If Cummings keeps his current pace — he’s averaging 5½ inclines a day, with days of six or seven common — he could finish Jan. 11 with close to 1,900.

That’s if his willpower and diabetes allow. Diabetes causes a complexity that’s “hard to calculate,” he said.

Start with 100. That’s about the number he wants to see from the device attached to his abdomen, relaying glucose levels to his iPhone. He checks at the top and the bottom and frequently in between, alarmed if he sees, say, 200. He’ll inject insulin to bring the number down. Then he’ll notice an alarming drop, forcing him to stop for an hour, breathing in and out as he downs carbs to bring the number back up.

That abdomen device is new, by the way — nice to not have to keep pricking his finger and carrying around bloody Kleenex. But neither it nor anything else can eradicate the disease Cummings has known for 37 years.

“In fact, it displays for me in a much more graphic way what happens to my blood glucose when I’m doing such an extreme athletic event,” he said. “It is literally all over the place.”

But still he’s trudged on, even on the day of Colorado’s notorious bomb cyclone. He tallied three climbs, suspecting he passed the person who reportedly ended up calling in for rescue. Another winter day, Cummings said he could only make one ascent, spending eight hours to clear snow.

Summer greeted him Friday, along with pain, as always.

“Sometimes it’s hard to get out of bed and move your legs and get functioning again,” he said.

What keeps him going?

“I don’t know. I guess I have a very hard time setting goals and giving up.”

Manitou Incline advocates seek return routes that would be alternates to Barr Trail, but no timetable for the project is in place amid questions.