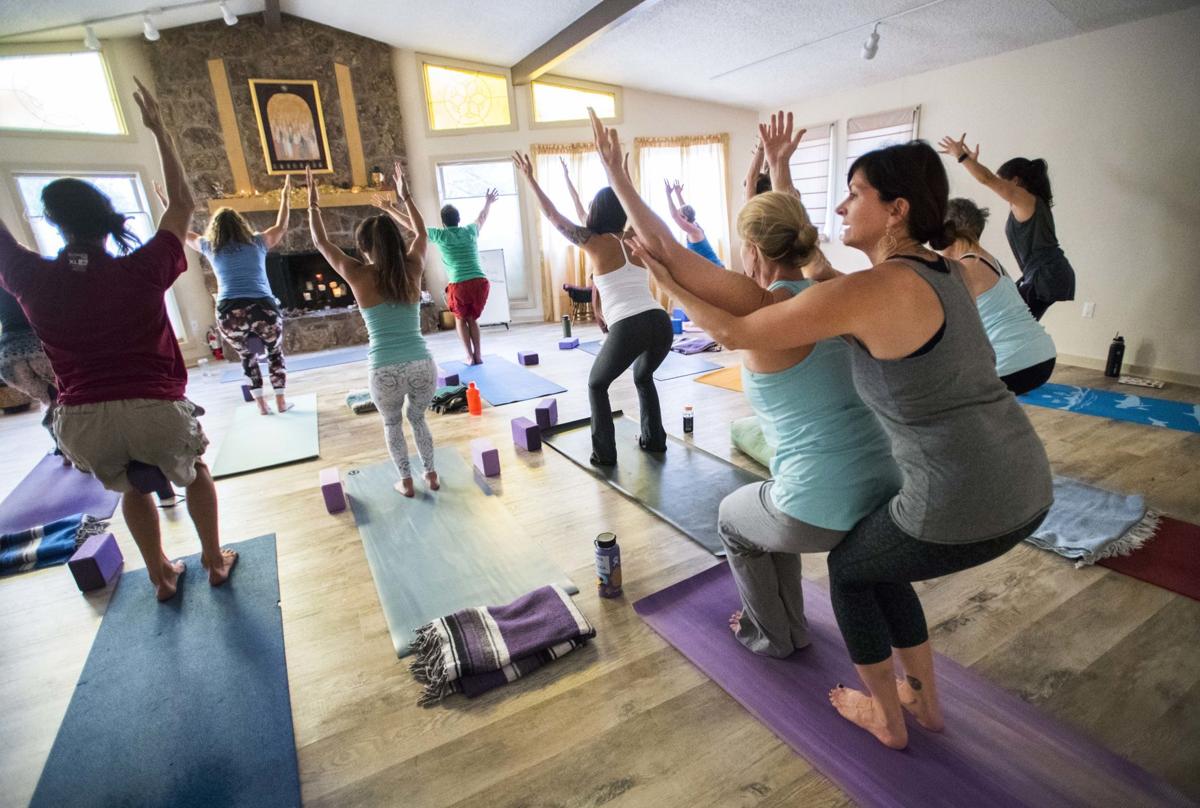 Jessica Patterson, owner of Root Center for Yoga and Sacred Studies, adjusts a student during her Candlelight Flow class at the Colorado Springs studio this month. 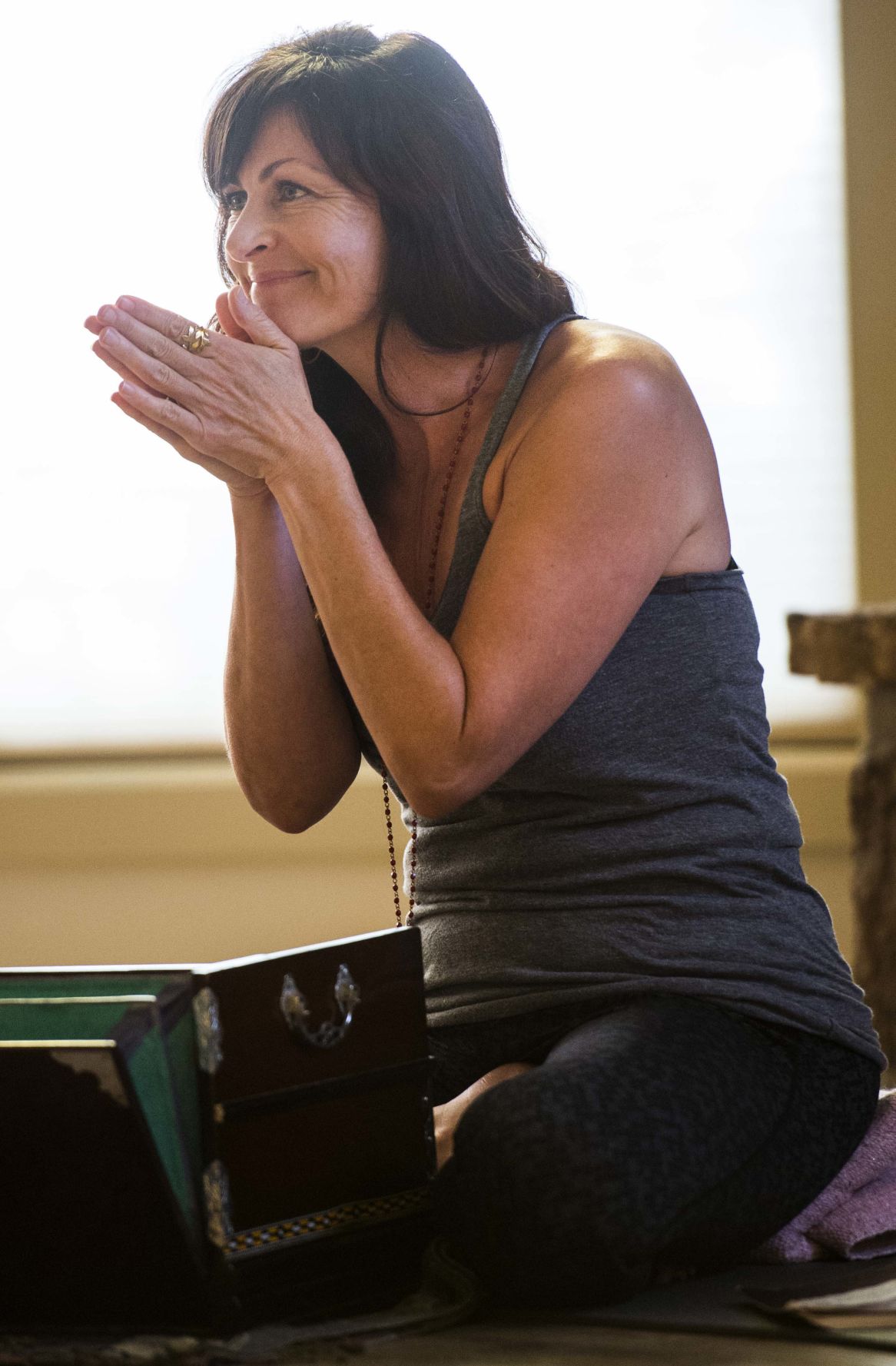 Jessica Patterson, owner of Root Center for Yoga and Sacred Studies, teaches her Breath, Bhakti and Samadhi class at the Colorado Springs studio this month. 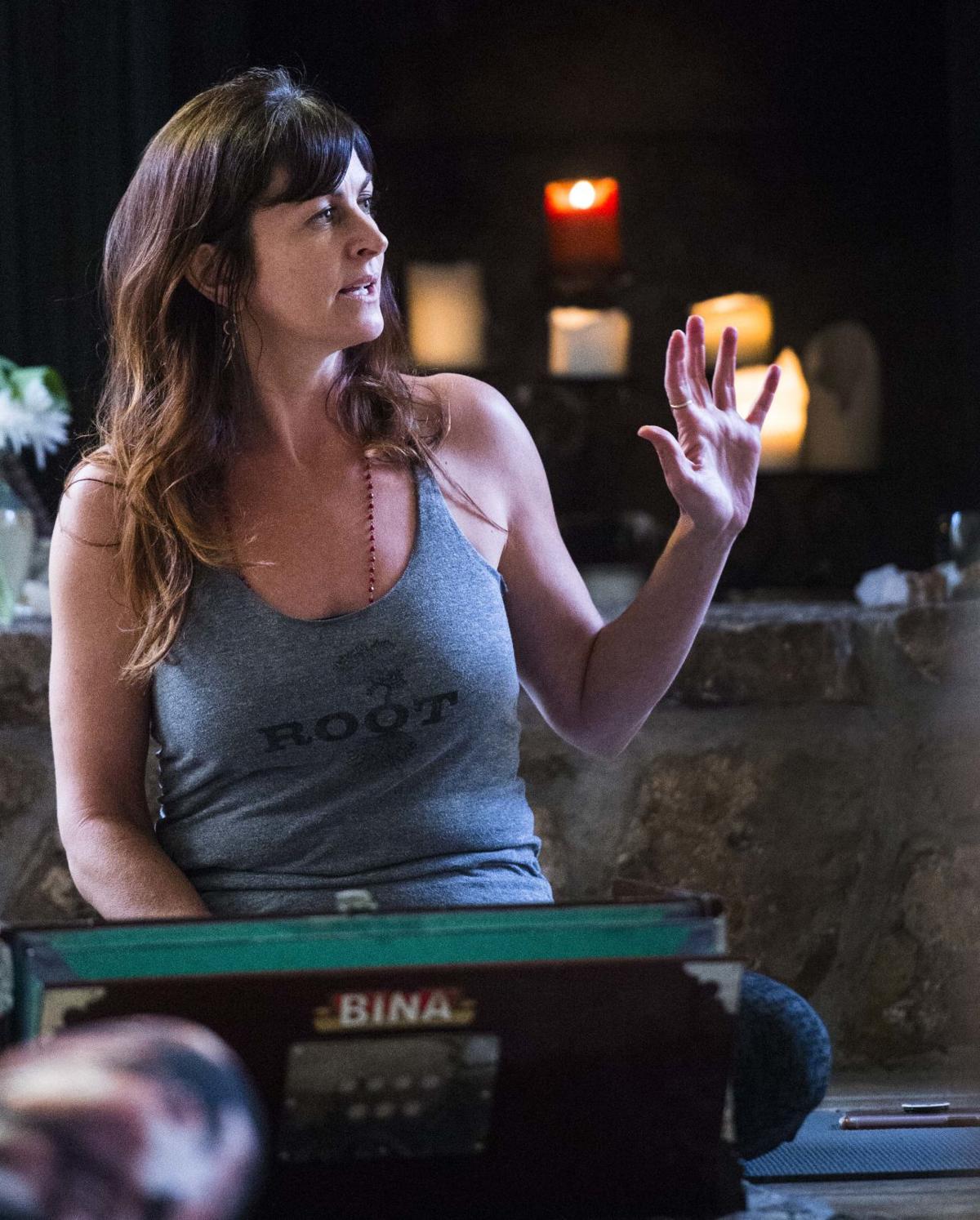 Jessica Patterson, owner of Root Center for Yoga and Sacred Studies, adjusts a student during her Candlelight Flow class at the Colorado Springs studio this month.

Jessica Patterson, owner of Root Center for Yoga and Sacred Studies, teaches her Breath, Bhakti and Samadhi class at the Colorado Springs studio this month.

As she ducks in and out of small rooms used for intimate yoga practice and massage therapy, Jessica Patterson greets her cross-legged colleagues with a smile and exits with a soft, “I love you.”

She sips warm water from her perch in her office chair, surrounded by rows of neatly shelved books, mostly about yoga and spirituality.

Five years ago, Patterson was a roaming teacher, instructing at studios and rented spaces. In the midst of personal hardship, she longed for a refuge, a space that felt sacred to her.

Hot springs in Colorado: A soaking oasis found within hour of Colorado Springs

“I’m dedicated to creating a space where everybody is welcome,” she said. “There is a practice for everyone. On our website, we don’t list beginner, intermediate or advanced. To me, the most advanced practitioner is the person who can sit with themselves and be in good company.”

The practice nourishes spirituality, but yoga is not a religion. Those with faith backgrounds find yoga compatible with their beliefs, Patterson said.

She says yoga is a spiritual “technology” that can deepen connection with one’s “primordial self,” the “deepest, oldest part of themselves.” She calls this “who you are, really,” but said this sensation is named differently by many religions.

Yogis often commit to the practice during serious life transformations, Patterson said. Rarely do people embark on an intensive yoga journey when everything is going their way. But practicing yoga consistently can help people find stability in a world of shifting variables, she said.

Many people assume the ego and personality are constants, but they’re fragile and dynamic, she said, and yoga helps people relate to something bigger.

Patterson teaches that loss is imminent, and that everyone’s bodies will be lost. The body is not the pinnacle of yoga practice at Root. Yoga has more tools than “asana,” the Sanskrit word for its widely recognizable postures and poses. That said, classes at Root are not without physical rigor, which Patterson said can help people practice breath and mental clarity.

As asana has become widely popular, she said, she fears its commercialization. Some studios “in this dysmorphic country” are using the same exploitative tactics as other industries, she said.

“We have multibillion dollar industries that are entirely geared toward figuring out where you feel deficient, and then they’ve got something to sell you for that. Which, of course, is the really lamentable thing about watching, what I see, in the tide of the popularity of yoga. It’s wonderful in a lot of ways because it’s made it so accessible for these practices that can be very effective for people. But at the same time, it can become sites of the same conquest and same merchandising of the body.”

Root was created to serve yogis in a more holistic capacity than meeting fitness goals or mastering poses, she said.

Chanting, for example, can seem a bit “hooey gooey, esoteric and new-agey,” she said. But, “When you hum, it’s incredibly soothing to the nervous system. The body is involved, and that is a practice you can do until the end, or someone can do with you until the end, unlike forearm stands.”

She said she hopes the tools and “technology” offered at Root will effect change.

“We really need more yogis in the world. I think about if someone I love has to go under the knife in surgery, I’d love to know that anesthesiologist or surgeon has a yogic perspective on things. What would it be like if we had yogic politicians or if we had yogis raising children and yogis in school systems?”

Root instructors lead weekly public classes. Root’s other programs include yoga and nutritional therapy, mentoring, individual yogic consultations, retreats, workshops and intensive teacher training through “RootEd, which has had 92 graduates over the past eight years.

On Sunday afternoons, some of those graduates teach a donation-based class called “Rooted in Seva,” which means “selfless service” in Sanskrit.

“I want Seva to be a bigger part of Root,” she said. “Not in the sense that it’s this great, white savior conquest of, ‘Oh, we’ll bring yoga to the masses.’ More like, how can we be of service in our community? That does not necessarily mean getting people to come here, but what can we do for others?”

Root is intended to be sustainable, not profitable, she said. People built many facets of the studio as gifts or alternative payment for teacher training.

“We don’t advertise,” she said. “We’re definitely word-of-mouth. This is a community-raised place.”

The classes are sorted by element, not difficulty. But people often choose an element, such as fire, that will cause them more imbalance, Patterson said.

“ ... culturally speaking, we don’t necessarily need more people to be overheated and aggressively pushing through life.”

Overall, she said, many of her students enjoy yoga for its practical application to everyday complications. Regular spiritual practice can pull people “home” from trivial frustrations and traumatic situations, she said.

“It’s a deeply spiritual experience because it connects them to something beyond their latest mood, the latest incidents and their latest sense of themselves, to that part that’s been continuous.”

Haley is a student at Seattle University. She was a features intern for The Gazette in summer 2018.