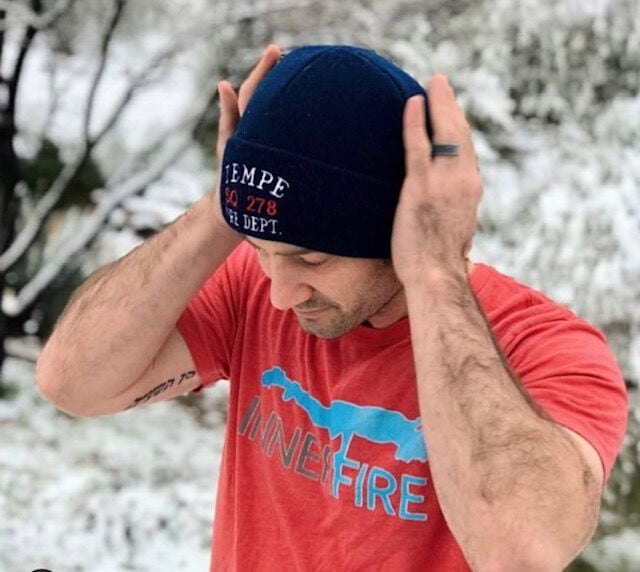 Ben Dubin, a former firefighter for the Colorado Springs Fire Department, is a certified Wim Hof instructor after the Wim Hof Method of breathwork and cold water plunges helped him after an injury.

Ben Dubin, a former firefighter for the Colorado Springs Fire Department, is a certified Wim Hof instructor after the Wim Hof Method of breathwork and cold water plunges helped him after an injury.

Hyperventilation and cold water plunges rescued Ben Dubin from the dark place he inhabited after an injury.

The two components, not to be attempted at the same time, are better known as the popular Wim Hof Method, which was developed by Hof, a Dutchman who also goes by the nickname The Iceman. The 61-year-old is known for his extreme physical feats, including climbing Mount Kilimanjaro in shorts, running a half-marathon above the Arctic Circle barefoot and standing in a container while covered with ice cubes for more than 100 minutes.

“What I can do, anybody can do,” he told Forbes last year.

For Dubin, a former firefighter for the Colorado Springs Fire Department, Hof’s method helped him achieve better mental health and physical fitness that aided him in his line of work. He’s now a certified Wim Hof instructor and is especially passionate about teaching the method to fellow firefighters, including a group of Springs firefighters in 2019.

As unappealing as the method might sound on the surface, there’s a method to its madness, promises Dubin, who’s now a firefighter and paramedic for the Tempe, Ariz., Fire Department .

“Breathwork is creating an internal stress like we do to ourselves all day,” he says. “The cold is showing us an external stress, like we’d face in an environment or daily life. We’re hitting that stress response from all angles. It’s how to process it and let it all go.”

During multiple rounds of the breathing exercise, you are asked to empty your lungs and then hold your breath, basically self-induced hyperventilation. After some practice, many say they’re able to hold their breath for extended amounts of time. The breathwork is followed by an icy dip or shower for as long as you can tolerate, building up to minutes in the cold. It’s meant to help you control your shiver response and tell your body to use metabolic activity for heat instead of muscle movement.

Dubin was first attracted to the method as a way to improve his physicality for his job. While in the Springs, he got halfway through a 10-week course, but lost momentum. Years later, after relocating to Tempe, he tore a biceps tendon and endured an unsuccessful surgery. Life felt bleak for the new father and firefighter who was now relegated to a desk job while he healed. On the verge of a second surgery, he knew he had to do something and remembered how good he felt during those five weeks of doing the Wim Hof Method. He recommitted.

Two months after his second surgery, he told his captain: “I’ve never felt better in my whole life. I realized mentally this is the best I’ve ever felt in my whole life. And if I can feel good in this situation, with everything going against me, how many of my brothers and sisters in the service could use this?”

The method also worked for Sophie Thunberg, who hit a wall of depression in 2019 and turned last year to Hof for potential relief. She spent a year committed to the practice, breathing and starting with 20 seconds of cold showers before working her way up to a comfortable 90 seconds.

“Breath is everything,” says the Colorado Springs resident. “When you do the practices ,it’s incredible. It’s like trying to describe what it’s like to be in love. You have to actually experience it.”

And the cold water?

“It sounds strange, but it feels better than coffee or tea in terms of stimulation in waking up,” she says. “Now it doesn’t feel like the cold affects me as much. It’s given me more clarity of mind.”

It also relieved her depression and helped her get off anti-depressants and coffee. She’s a believer, but at the same time thinks Hof is deriving his method from ancient spiritual lineages, such as yoga and Ayurveda, a natural system of medicine from India.

“Any yoga therapist can tell us that Wim Hof isn’t telling us anything new. Hof would also say it’s not anything new,” she says. “It sounds and feels right because it’s something we all know and feel to be true. Our biology is incredible and most people barely scratch the surfaces of the possibilities lying underneath for healing, rest and revitalization.”

Hof, who holds a slew of Guinness World Records for swimming under ice and lengthy full-body contact with ice, as well as the record for a barefoot half-marathon on ice and snow, is also a man with a tragic backstory. His wife died by suicide in 1995, leaving him with four children. In an effort to find some measure of happiness again, he found breathwork and getting cold to be an effective antidote to grief.

“He’s one of the most passionate people I’ve ever met who’s in this for the right reason — to help people heal,” says Dubin, who trained with Hof on the West Coast. As part of advanced coursework in 2018, Hof led a group of 40, ranging in age from 20 to 75, up Oregon’s Mount Hood as a way to practice being cold and comfortable. Dubin wore only shorts and shoes.

Commodores musician, who found healing energy in Colorado Springs, reflects on fame and power of music

The method uses hormesis, says Dubin, which means exposing your physiology to a certain amount of stress for a certain amount of time to adapt and become stronger. Practitioners use controlled hypoxic breathing, or temporarily depriving the body of an adequate supply of oxygen to the blood. In 2019, three scientists were awarded the Nobel prize in physiology or medicine for studying this type of breathing and how it can benefit the body by making new blood cells and vessels.

And then there’s the cold water portion, which immediately follows the breathwork. Hof emphasizes doing it gradually, and says it will cause the tiny vascular roads in the vascular system to be well-stimulated and trained to help energy and blood flow. He says your heart rate will go down and your immune cells will be better fed.

“The cold shower is no longer a cold shower. It’s a psychological thing,” he says in a video on his website, wimhofmethod.com. “Because you are too much in the comfort zone and that weakens the systems. A lot of discomfort will derive from being too long in the comfort zone. We think it’s good, but in the end it’s a killer. We try to prevent that by going into cold showers.”

The Wim Hof Method is contraindicated for those with epilepsy, high blood pressure, coronary heart disease or a history of serious health issues, such as heart failure or stroke. Those who get migraines are cautioned about the cold water plunges.

It’s also not without its controversies, and is blamed for a 2017 death. According to The Kansas City Star, a 43-year-old Sacramento, Calif., man fainted and drowned while sitting in a pool of water doing the hyperventilation breathing technique.

“He wanted to show other people we have a pharmacy inside of us,” Dubin says of Hof. “He’ll never say he’s a guru. He doesn’t want accolades or attention. He just wants people to be happy.”

Are too many vegetables ever possible? 'Yes,' after Natural Grocers session in Colorado Springs | Live Well

I eat too many vegetables.