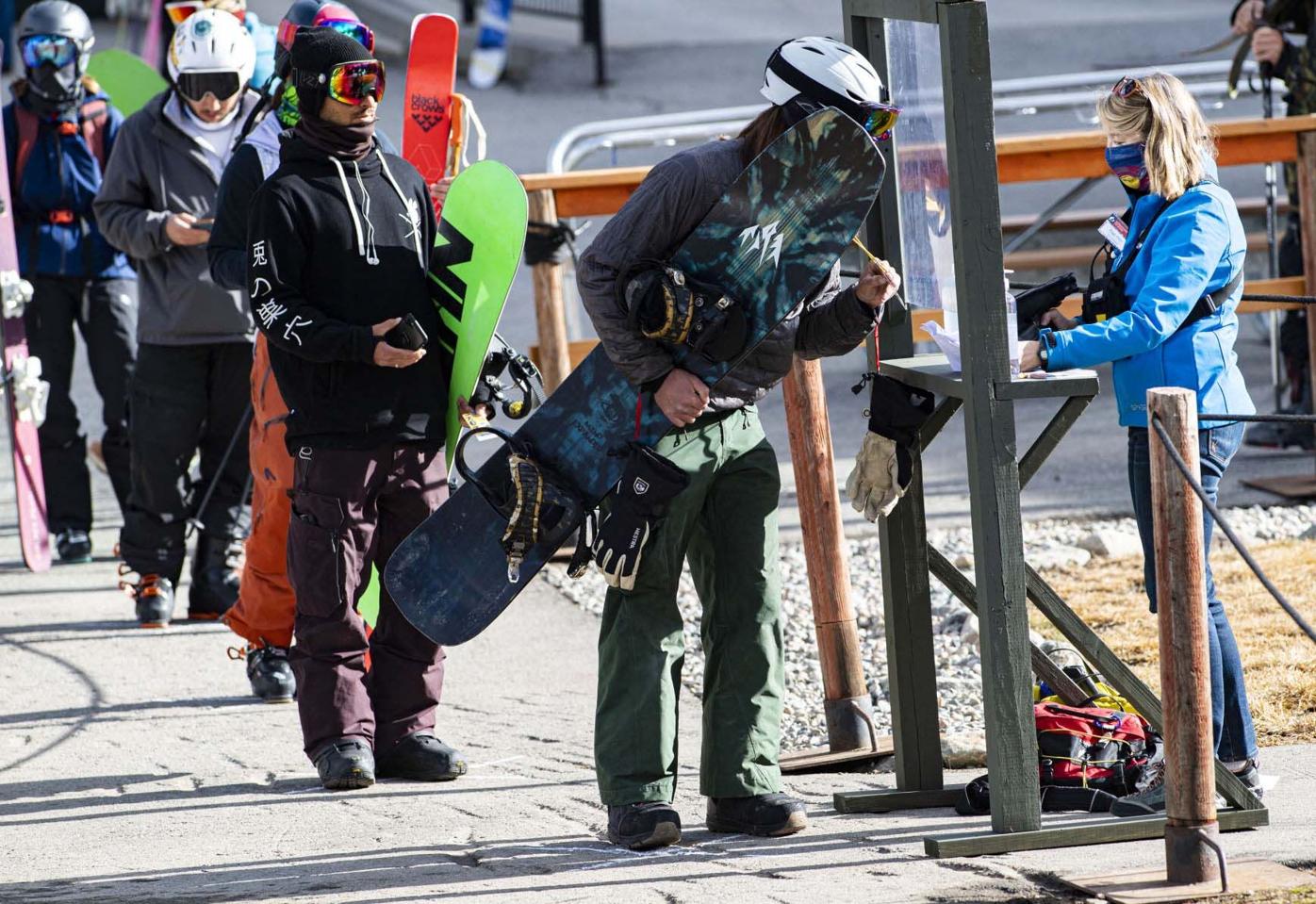 Peggy Miller, vice president of operations at Arapahoe Basin, checks in skiers and snowboarders at the base. Christian Murdock, The Gazette 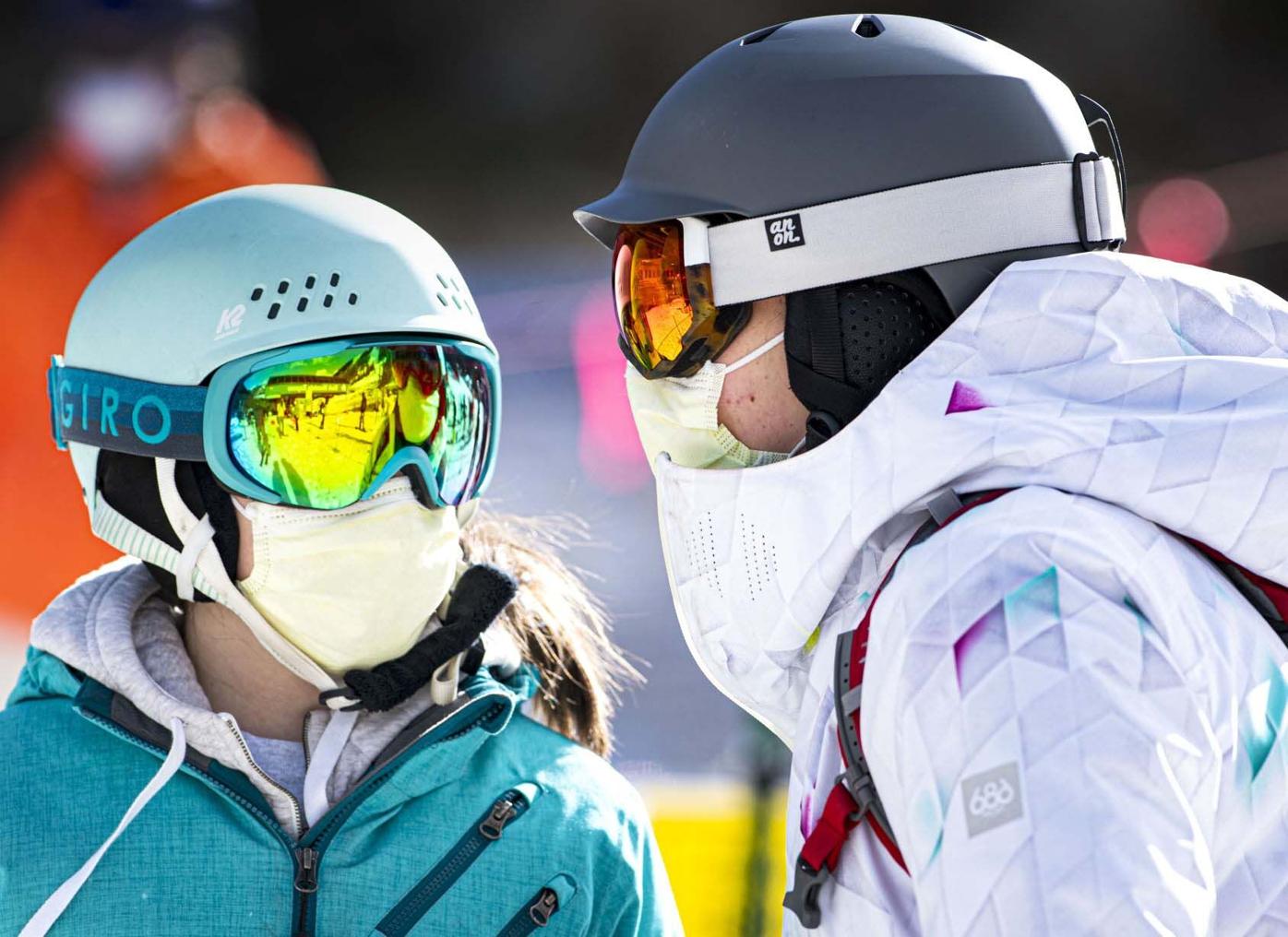 Ella Anderson, 12, left, and Finley Anderson, 14, of Evergreen, wear their masks as they wait in line for first chair at Arapahoe Basin on May 27, the first day back skiing at Colorado ski area since the state closed all areas in March because of the COVID-19 pandemic.

Peggy Miller, vice president of operations at Arapahoe Basin, checks in skiers and snowboarders at the base. Christian Murdock, The Gazette

Ella Anderson, 12, left, and Finley Anderson, 14, of Evergreen, wear their masks as they wait in line for first chair at Arapahoe Basin on May 27, the first day back skiing at Colorado ski area since the state closed all areas in March because of the COVID-19 pandemic.

Anyone dreaming of Colorado snow this season unfortunately will wake to a world in which COVID-19 still exists. This is a reality of which the state tourism office is acutely aware.

“While on-mountain activities tend to be naturally socially distant,” said office spokeswoman Abby Leeper Gibson, “it’s important that travelers are protected throughout their experience, from renting gear to apres ski.”

But the usual international clientele is not expected to be nearly as substantial for that industry this winter. Leeper Gibson said the state is marketing only to residents.

Her office is spreading a new message: “responsible tourism,” she said — “showing care” to residents and visitors alike and abiding by local health guidelines.

Here's what to expect when traveling to the high country:

Uniformly across the slopes, regulations entail social distancing, loading chairlifts with only related members of your party, required face coverings and restrictions in lodges.

"Yes, there will be new procedures this winter," as Aspen Skiing Co. president and CEO Mike Kaplan wrote in a letter to customers, "and a handful of the exuberant social activities we are famous for will be greatly subdued."

Procedures include reservation systems aimed at cutting crowds, like the one Vail Resorts has laid out for regulars of the company's flagship resort along with Breckenridge, Keystone, Beaver Creek and Crested Butte.

In a video message to pass holders, company CEO Rob Katz said the system could be axed if deemed unnecessary. "But it would be a lot easier to remove the reservation system than to put one in mid-season," he said.

Vail has expressed confidence in Coloradans getting to ski when they want to ski — a hope partly based on the expectation of fewer foreigners traveling to the state. Nonetheless, pass holders heading into the season were preparing for headaches, similar to those induced by Arapahoe Basin's reservation system that was overwhelmed during the ski area's brief reopening in May and June.

While Ikon Pass holders heading to A-Basin will have to make reservations, it won't be required for the ski area's exclusive pass holders or single-day customers — though, the number of those tickets will be limited.

Monarch Mountain is among several other ski areas to also announce reducing day passes to control numbers. In a letter to customers, general manager Randy Stroud recalled a popular phrase: "It takes two to tango." One request was for regulars to become "weekday warriors."

"We will do everything in our power to make sure we have set the stage for the season to be successful," Stroud wrote, "but we will need you, our guest, to be a part of this success as well."

When ski areas closed this spring, enthusiasts strapped on touring gear and earned their turns in the mountains without chairlifts.

Parking lots quickly filled at destinations such as Berthoud and Loveland passes. Drivers parked along highway shoulders, forming long lines and risking tickets. The surge was troubling enough for San Juan County to make the unprecedented, controversial decision to ban outsiders from its backcountry.

And a disturbing toll ticked on.

"That is a lot for that time period," the center's director, Ethan Greene, said. "That definitely felt like an increase to us."

It is a grim occurrence intertwined with recent trends. In 2018, Snowsports Industries America received data from retail-monitoring NPD Group that showed year-to-year alpine touring skis, boots and bindings up 24%. Over the decade, NPD Group has reported sales for the gear quadrupling.

That has land managers and search and rescue teams on alert approaching winter, especially with ski areas limiting their visitation.

"If there are more people recreating in the backcountry on avalanche terrain, the chances for avalanche accidents go up," Greene said. "We may see more accidents. I really hope we don't see more deaths. We're going to be doing everything we can to make sure that doesn't happen."

That'll start with communication, he said. Encouraging people to be prepared, equipped with shovels and beacons at the least; to sign up for avalanche safety classes; and to check daily risk forecasts at avalanche.state.co.us.

From guided trips on snowmobiles to Christmas-themed train rides to excursions on horse-drawn sleighs, many providers of Colorado’s signature activities had yet to announce winter plans as October began.

"We are anticipating opening," said Frisco assistant town manager Diane McBride, who oversees the town's beloved tubing hill. "That's knowing of course that everything could change depending on public health guidelines."

McBride expected the family attraction to open by Thanksgiving weekend. Tubing at Frisco Adventure Park every winter draws about 70,000 people, she said — and that could be more this year.

"With the ski areas limiting capacities and a variety of different things, we really do think folks are going to be looking for alternative activities to do," she said. "We think tubing is going to be one of those activities."

Another might be cross-country skiing or snowshoeing with friends and family through powder-packed woods to a series of cozy huts and yurts. In August, 10th Mountain Division Hut Association announced suspending reservations while re-working its system to reflect COVID-19 changes, which include a smaller number of people in a single party.

The state's highest hut system, Hinsdale Haute Route in the San Juan Mountains, has kept one of its two bases closed "due to public health orders and our inability to sanitize between guests." Near Pagosa Springs, managers of the Pass Creek Yurt have announced cutting back on reservations.

That's all fairly representative of operating changes across the tourism landscape this winter.

The season is prime time for resting weary bones in geothermal waters. But those visions of relaxation could come with inconveniences — however minor, commercial operators hope.

At Mount Princeton Hot Springs near Buena Vista, for example, they've hoped for low wait times for guests, who've been allowed into limited-capacity pools on a first-come, first-served basis. The policy has been similar at Glenwood Hot Springs.

Meanwhile, at Steamboat's famous Strawberry Park Hot Springs, soakers have had to make online reservations for two-hour slots. To the south, Valley View Hot Springs has only been accepting overnight guest bookings 30 days in advance.

The website zrankings.com is the snow source behind Forbes' annual grading of North American resorts. Its mountain- and data-crazed team seeks…