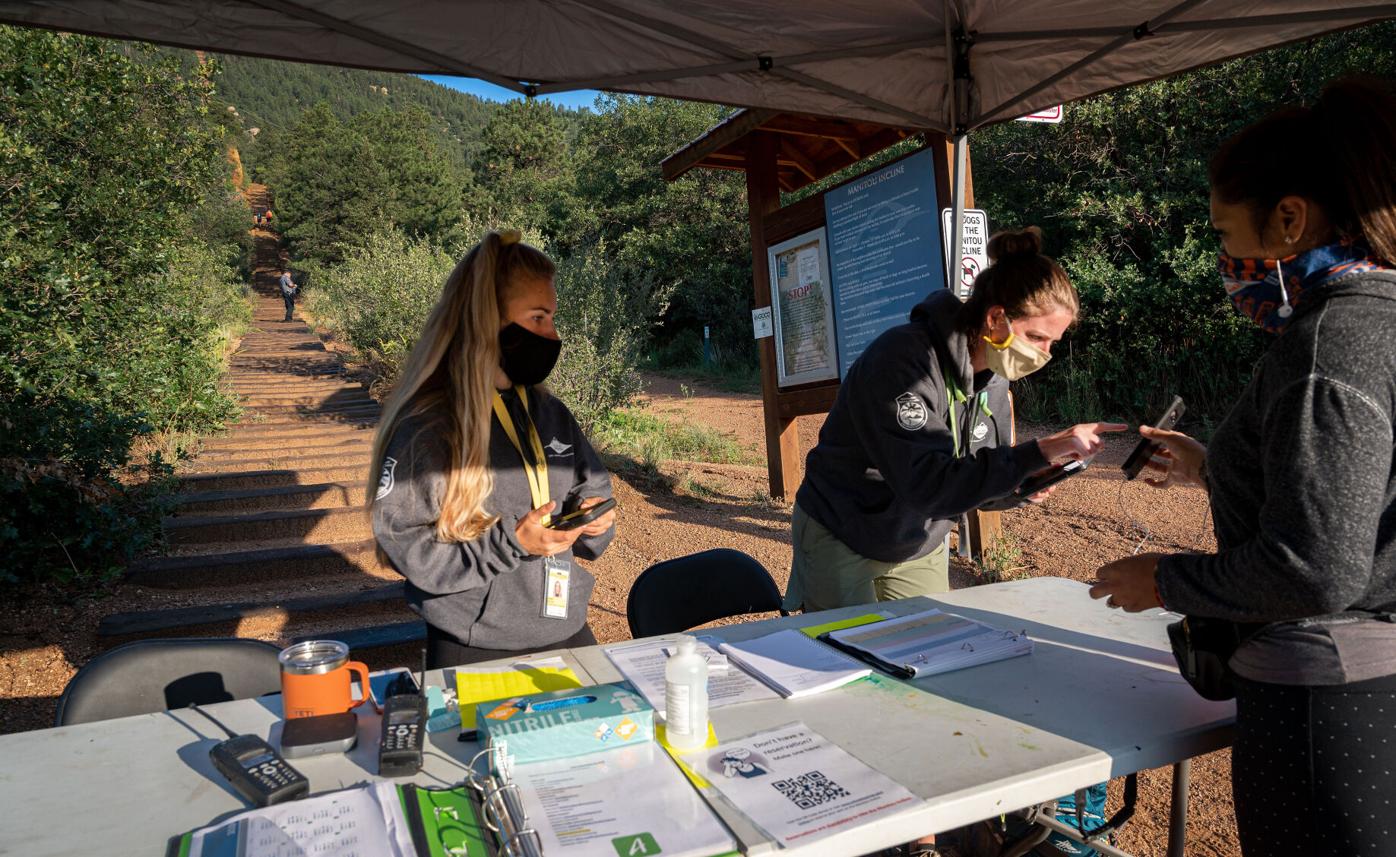 Davis Jess, right, and Kraft Rylee, from Colorado Springs Park and Recreation, check in a hiker at the base of the Manitou Springs Incline in August, on the first day of its reopening since March due to the COVID-19 pandemic. 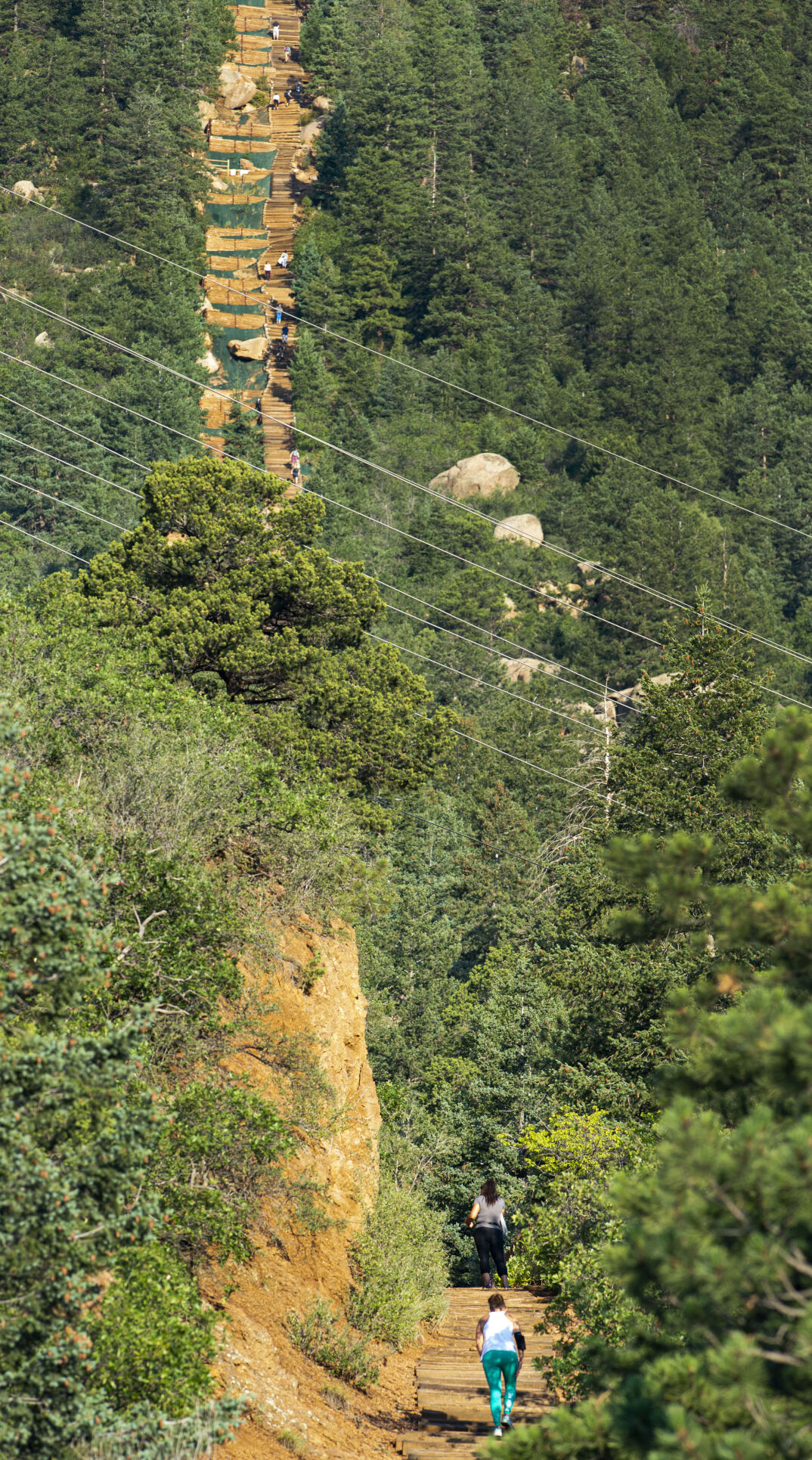 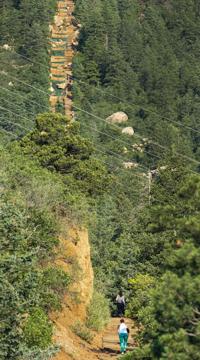 Hikers make their way up the Manitou Springs Incline Thursday morning, Aug. 6, 2020, on the first day of its reopening since March due to the COVID-19 pandemic. Hikers must register online at coloradosprings.gov/incline for a start time. (The Gazette, Christian Murdock)

Davis Jess, right, and Kraft Rylee, from Colorado Springs Park and Recreation, check in a hiker at the base of the Manitou Springs Incline in August, on the first day of its reopening since March due to the COVID-19 pandemic.

Hikers make their way up the Manitou Springs Incline Thursday morning, Aug. 6, 2020, on the first day of its reopening since March due to the COVID-19 pandemic. Hikers must register online at coloradosprings.gov/incline for a start time. (The Gazette, Christian Murdock)

Close to one year into required reservations on the Manitou Incline, the jury is still out on the regime intended to alleviate traffic and parking woes in the little town west of Colorado Springs.

It appears crowds have indeed been cut on what has been considered the Pikes Peak region's most popular trail.

After contentious debate between officials representing land-owning and managing Colorado Springs and counterparts in Manitou Springs, free reservations on the Incline opened Aug. 6 last year. Up to July 21 of this year, trail counter data suggests nearly 251,000 people hiked the famed set of railroad ties. That was closer to 319,000 in the same time frame a year prior, before reservations were mandatory.

While imperfect, the in-ground counter indicates a year-to-year difference of about 68,000 people.

Overseeing the system and paying for attendants at the Incline's base, the Colorado Springs parks department said midway through this week that 258,266 spots had been booked since the system's inception. That data didn't account for how many people actually showed up for their reservation; no-show rates have reportedly reached as high as 45% at times. In their place, hikers without reservations have been allowed up the steps, said Kurt Schroeder, Colorado Springs' park operations and development manager.

This summer, Schroeder said, attendants at the Incline's base have kept a running tally of no-shows, "handing out" those spots to visitors who arrive either unable to book a reservation at a desired time or unaware of the policy. Schroeder said they've been permitted to fill limited slots agreed upon by Colorado Springs and Manitou officials.

Based on half-hour caps between 6 a.m. and 6 p.m., the system allows for 1,125 hikers daily. Schroeder said that total was never reached in the system's first year; the closest, he said, was 1,054 on July 4. According to data provided by the parks department, the daily average of reservations up to July 21 was 740.

Schroeder said he was "more than satisfied" with the numbers. "Because I'm not hearing that droves of people are not able to take advantage of the resource. As a matter of fact, we still have spots for people to reserve if they would so choose."

Those have typically been less-than-desirable spots in hot or stormy afternoon hours.

But considering the goal of balancing access with Manitou's long-expressed complaints of Incline-caused headaches on streets and parking lots, "we feel it's been highly successful," Schroeder said of the reservation system.

It's "done a great job of reducing congestion downtown and in the Ruxton Corridor," Manitou spokesman Alex Trefry said in a statement, "resulting in a better quality of life for nearby residents, but also a better experience for those using the Incline."

Some Incline regulars have sounded pleased by the thinned crowds. Others have become former regulars, saying bureaucracy has ruined their old workout ritual.

On the Incline's busy Facebook fan page, locals have responded with varied advice for inquisitive out-of-towners.

"I think it's sad when people post something like, my husband and I already bought our airline tickets, and are we gonna be able to get on it?" said Bill Beagle, president of Incline Friends, which continues to stand against reservations. "To worry about getting on any trail is just kinda sad."

Visitors from other states accounted for 28% of reservations made, according to provided data. El Paso County residents made up 46%, while Coloradans from elsewhere spelled 26%.

Manitou has reported Incline-related rescue calls are down significantly since the reservations — a credit to fewer hikers and attendants who have flagged unprepared hikers.

"You can't say enough about those attendants," Beagle said. "I've heard nothing but good things about them."

The question from him and other critics: Are they worth the cost for a cash-strapped Colorado Springs parks department?

Previously projecting the team of part-timers to cost about $120,000 annually, the department is now estimating the bill to be closer to $140,000.

"I think that money could be used so much more effectively," Davies said.

She said her organization gets weekly calls from people who have "trouble navigating" the reservation system. Some, she said, are without computers or without the technological know-how to book a spot.

"Is this something of a social equity issue?" she asked. "Certainly, there are people who can't afford the Y or a gym membership, but they've always had the Incline. And they should have the Incline."

Davies said she was also aware of hikers not bothering with reservations and simply showing up.

"There are people realizing there's no teeth to this policy," she said. "I worry more about the people who look at this and say, there's a policy, and there's no room for me, and they're shut out. I feel for those folks."

Little town has claim to Colorado's only rock-crawling park

RANGELY • At the base of a craggy ridge in Colorado’s far western desert, Shawn Morgan parks his souped-up Jeep and eyes his target.

Heights of Luxury in the Center of Town

Heights of Luxury in the Center of Town